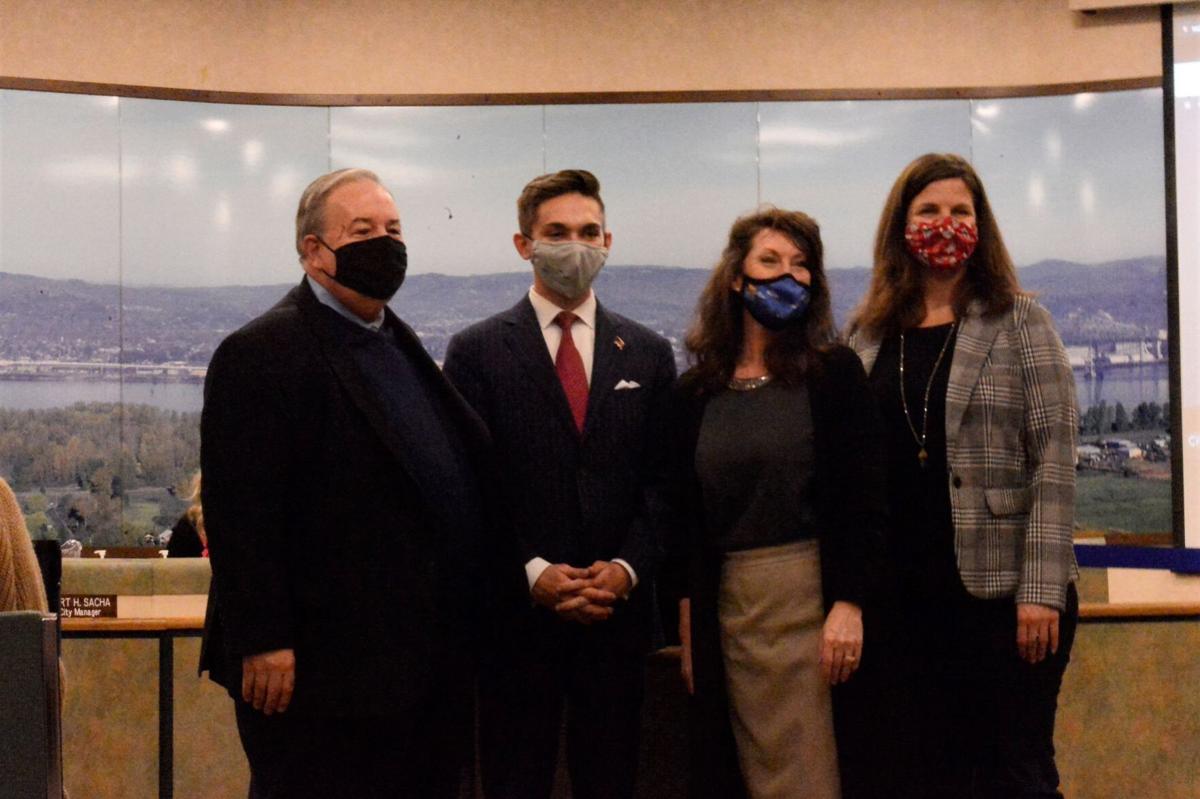 Spencer Boudreau, MaryAlice Wallis and Angie Wean pose with Municipal Court Judge John Hays after being sworn in as members of the Longview City Council on Thursday. 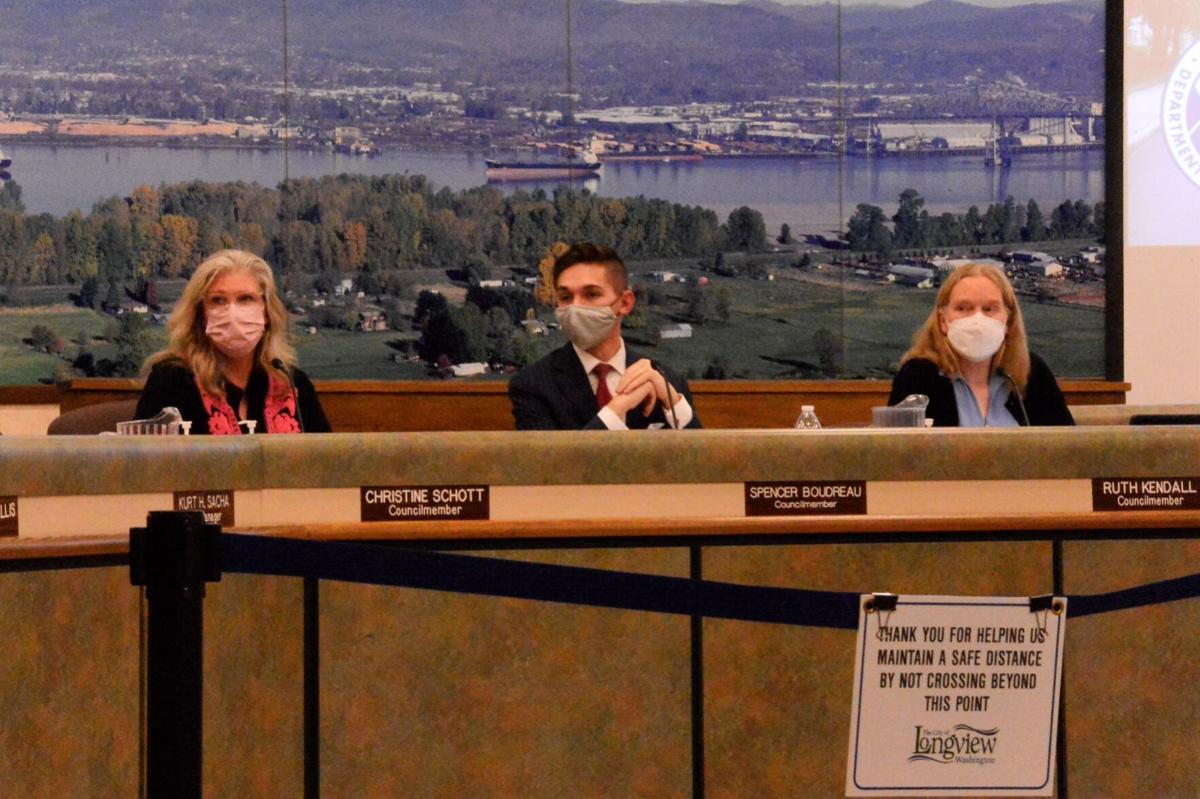 The Longview City Council passed an emergency moratorium for its downtown corridor Thursday, keeping all nonprofits and many for-profit businesses from opening there for several months.

The unanimous vote establishes an immediate six-month moratorium to allow the planning commission time to consider rezoning the Downtown Commerce District. The ordinance pauses all permit and licenses issued for the district and limits the creation of any new businesses that aren’t selling home goods or offering professional services, such as real estate or insurance.

The council chambers were filled to near capacity at Thursday night’s meeting, with a crowd dominated by business and property owners who supported the moratorium. Many of the public comments raised concerns about the number of nonprofits that already have settled along Commerce Avenue and rumors that a soup kitchen was being planned for the area.

“I really think our community is in need of a food center for the homeless, but I don’t believe Commerce Avenue is the place to have it at,” Marnee Harris, who owns the Wander shoe boutique, told the council Thursday.

Questions about emergency need for changes

The moratorium was proposed by council members Spencer Boudreau and Hillary Strobel. The two of them framed the bill as a temporary pause that would allow the planning commission to review zoning changes and the big-picture needs for the downtown corridor.

“This is part and parcel with building a vibrant downtown that everyone wants to see, as well as making sure those who need it have access to those services,” Strobel said.

The moratorium also would guarantee multiple public hearings about the future of downtown Longview.

Community Development Director Ann Rivers said the ordinance has been in the works in some form since November, when Boudreau and Angie Wean were first elected to the council.

While the council ended up unanimously voting for the measure, council members repeatedly asked for clarification about why there was an emergency need to issue the moratorium.

“I believe the emergency nature of it is challenging because it addresses something that is not in the actual paperwork,” Wean said.

City Attorney Jim McNamara said the emergency nature was to prevent a flood of applications from places that may be about to get zoned out of the district. Places currently operating on Commerce Avenue or ones that have filed to set up shop are vested in the current zoning situation and would not be removed by future changes.

‘You can’t keep them from being downtown’

Country Folks Deli owner Paige Espinoza said she spoke to a woman who was interested in opening a soup kitchen next door. The proposed soup kitchen would be located in the former home of the Fathers House church and the Old Creekside Café.

Espinoza said she supported the idea of Longview getting a soup kitchen in principle. She said her concerns came from previous damage to buildings owners suspect was caused by homeless residents and worries the people who eat at soup kitchens might scare away customers.

“I want to know how they plan to keep it all inside the building, so it won’t spill out onto the rest of the street,” Espinoza said.

Not all public comments supported the moratorium. One property owner who called into the meeting said the pause could be a “death sentence” for owners of currently empty buildings. Other people questioned whether pushing for zoning changes would have the effect the City Council expects.

“The homeless have a right to be downtown. You can’t keep them from being downtown,” Longview resident George Brajcich said. “Thinking you can do that by zoning is not going to happen.”

There is no guarantee of what zoning changes or limitations would end up being proposed for the downtown corridor by the planning commission or approved by the City Council. The council vote Thursday set a public hearing for March 10 to confirm the need for an emergency moratorium and extend it.

As Lower Columbia College President Chris Bailey dug through the college’s enrollment data for the current school year, he ran into a surprisi…

Capitol Dispatch is a weekly politics feature focusing on the actions of our local representatives during the 2022 legislative session. It wil…

The Cowlitz County commissioners Tuesday approved a $161,750 contract for repairs to the annex building after flooding during the 2021 Labor D…

Joe Kent, Heidi St. John and other Republicans hoping to unseat Rep. Jaime Herrera Beutler made their cases at a forum in Kelso on Wednesday night.

After nearly two hours of discussion, the Cowlitz County commissioners approved a $9.4 million contract with the state to administer a rent an…

The City of Rainier has opened applications for a City Council vacancy after a member stepped down through email on Monday.

If you looked at the temperature of space, what would you get?

If you looked at the temperature of space, what would you get?

Spencer Boudreau, MaryAlice Wallis and Angie Wean pose with Municipal Court Judge John Hays after being sworn in as members of the Longview City Council on Thursday.