Become a Member
Read Today's E-edition
Share This
Gospodor monuments along I-5 showing their age, with no restoration plan in place
0 comments
Share this

The late millionaire Dominic Gospodor’s memorial monuments have long been an unusual sight among the evergreens lining the Interstate 5 in southern Lewis County.

Resting atop towering columns — one more than 100 feet tall — the gold-painted, wood-and-steel sculptures glisten in the sun’s reflection.

The unusual landmarks were Gospodor’s pride until his death in 2010. Since then, however, care for the monuments has fallen by the wayside.

Much of the gold paint is peeling. Bird droppings cover several statues. On the central tower, the statue depicting Jesus has lost its right arm.

The Cowlitz Tribe, which owns the property, said it is more concerned with preserving the 10-acre property than tending to Gospodor’s monuments.

“We have been maintaining (the land) for conservation. There’s a wetland there that provides habitat for a lot of local wildlife and contributes to the greater vitality of the greater community there,” tribal Chairman Bill Iyall said Wednesday. “The monuments were not an object we were necessarily pursuing, but they obviously came complete with the property.”

The monuments — columns featuring statues of Jesus, an “eternal” electric flame and Chief Seattle (later replaced by a giant weather vane) — were built in 2002 by Gospodor as tributes to Mother Theresa, Native Americans and Holocaust victims.

Gospodor, a real estate dealer with a reputation for eccentricity, initially wanted to build the monuments near Seattle’s Space Needle, but his request was ultimately rejected. He unsuccessfully sought another building permit on land he owned in Oregon before Lewis County finally approved his proposal.

Gospodor spent more than $500,000 to build the sculptures. The grandiose scope of the project drew criticism from some and perplexed many others.

“Mr. Gospodor was a very interesting person, and we followed (the construction) with the same kind of questions as the general public had,” Iyall said. “He had the money to do this, and he wanted to put something there.”

Upon the monuments’ completion, drivers would slow down on either side of I-5 to state at the monuments, backing up traffic for several miles. The monuments were originally illuminated at night, making them visible from miles away.

Gospodor’s estate shut down the lighting after his death. Officials of the Cowlitz Tribe, which purchased the land in 2012 from Gospodor’s estate, has not restored the lights or maintained the monuments — and they don’t intend to.

“I don’t think those monuments were intended to be permanent. They’re made of wood,” Iyall said. “Our primary purpose of owning the land is to conserve the land.”

Even if the tribe wanted to preserve the sculptures, Iyall said it lacks the money to do so.

“The (estate) provided no money to maintain the actual monuments,” he said.

Toledo Mayor Jerry Pratt, who took an early liking to the roadside attractions, said he was disappointed that the monuments are falling apart.

“The fact that (Gospodor) would take the time to do something like that, to me, it’s kind of cool,” Pratt said Thursday. “I was hoping when (the tribe) bought it, they’d do a lot more with it. It’s a neat attraction, so it’s sad (what’s happened to the monuments).”

Pratt said he understands why the tribe can’t maintain the sculptures. Before he died, Gospodor estimated that lighting the monuments cost about $150 every month.

“I can’t fault the Cowlitz Tribe for doing what they want to do,” Pratt said. “I know the city couldn’t afford to maintain something like that, so I don’t expect them to.”

Strong winds knock Jesus statue from atop I-5 Gospodor monument

Tuesday’s high winds toppled the Jesus statue atop the Gospodor monuments along Interstate 5 near Winlock.

One of Dominic Gospodor’s landmark monuments — roadside fixtures that tower alongside Interstate 5 near Toledo — will soon have a change of scenery.

Dominic Gospodor, man behind I-5 monuments, dies at 86

What happens with Gospodor's creations now? 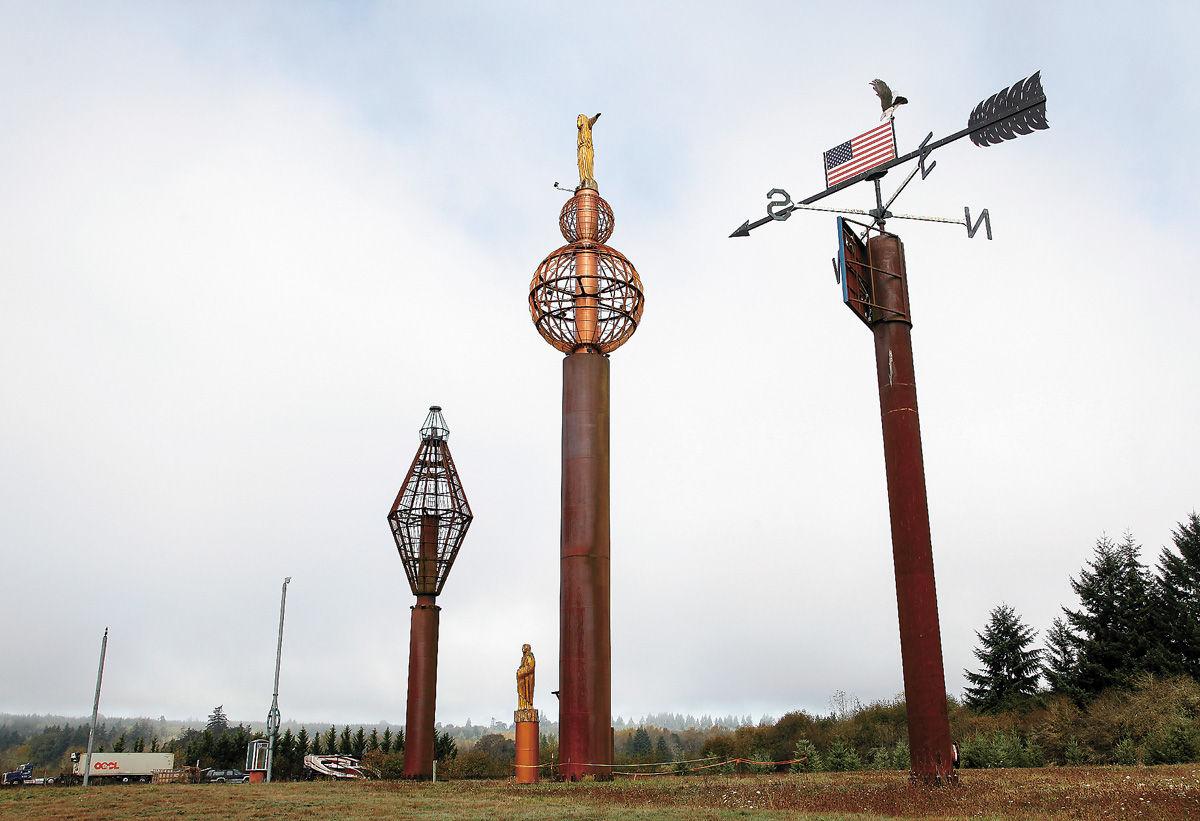 The figure representing Jesus stands higher in the center of the Gospodor monuments alongside northbound I-5 near the Winlock Exit at MP63. 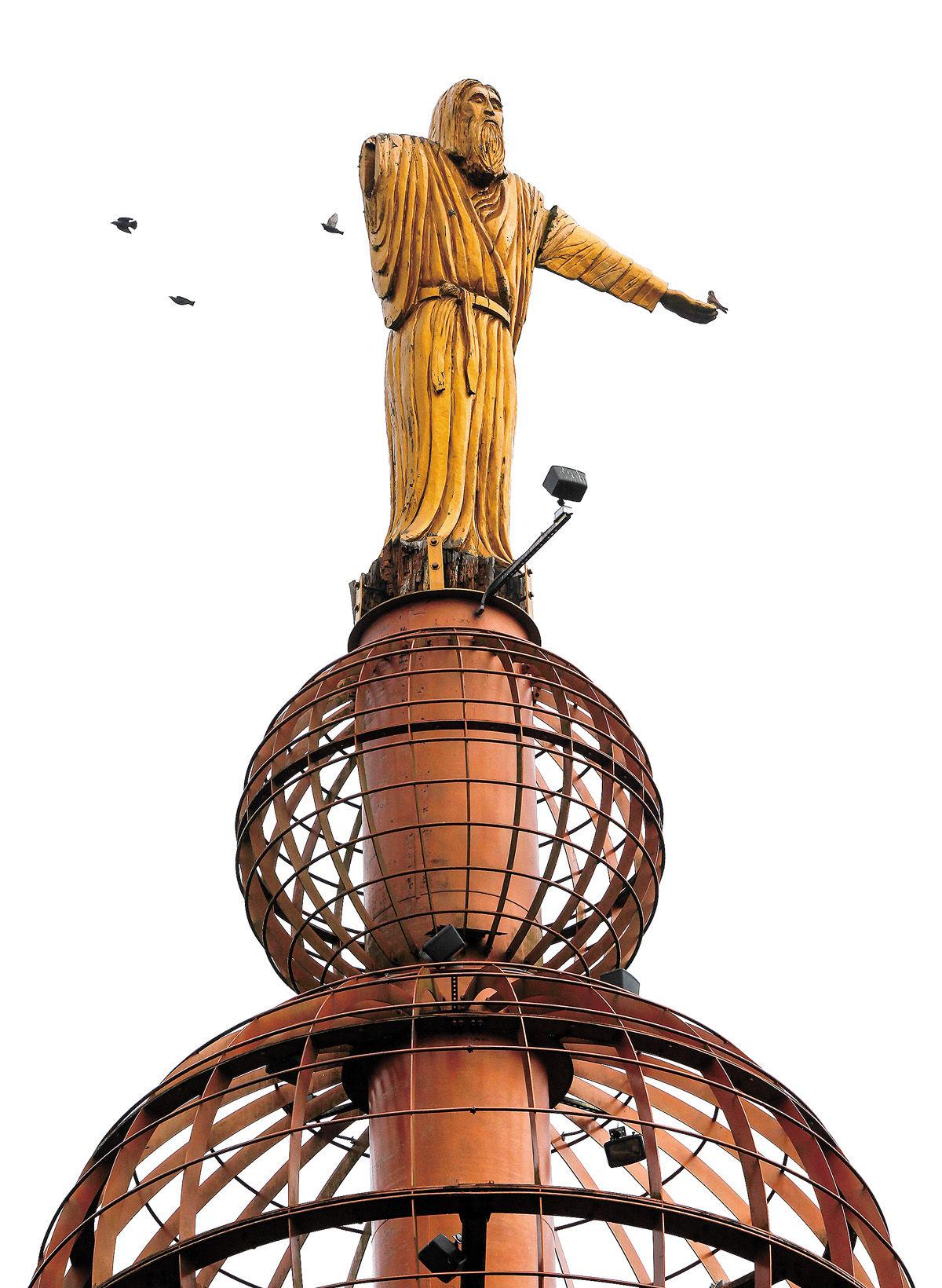 With one arm now missing from the figure representing Jesus, there are fewer places for birds to perch on the Gospodor monuments alongside northbound I-5 near the Winlock Exit at MP63.