Give More 24! raises more than $1 million for nonprofits
0 comments
Share this
{{featured_button_text}}
1 of 3 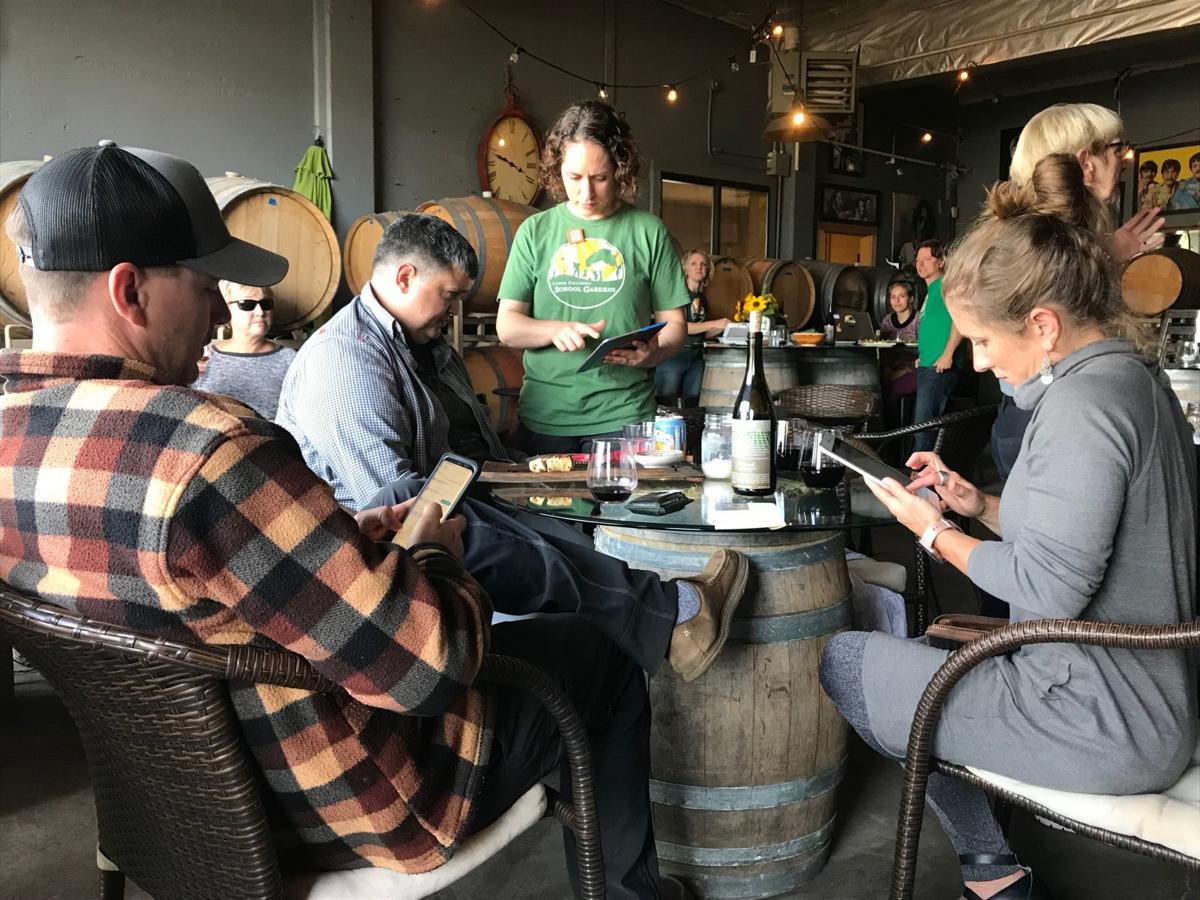 Chris Wills, left, Jen Wills, right and Reuben and Gail Bishop, center, enter their donations for Give More 24! during a "happy hour prize party" for the Lower Columbia School Gardens, one of the nearly 30 Cowlitz County nonprofits participating in southwest Washington's largest day of online giving. 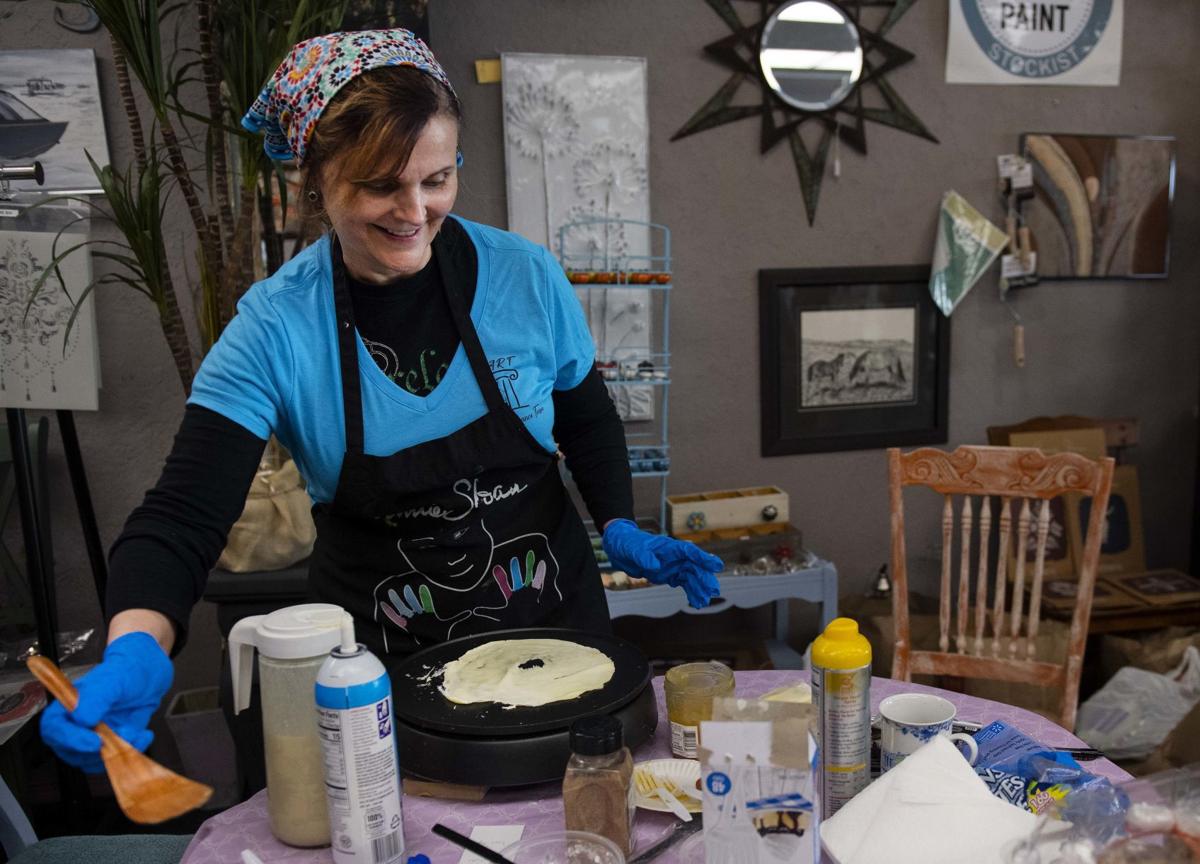 Retha Porter, an ART committee chairwoman, whips up a fresh lemon crepe during the Give More to Great ART fundraising event at Teague’s Interiors on Thursday. 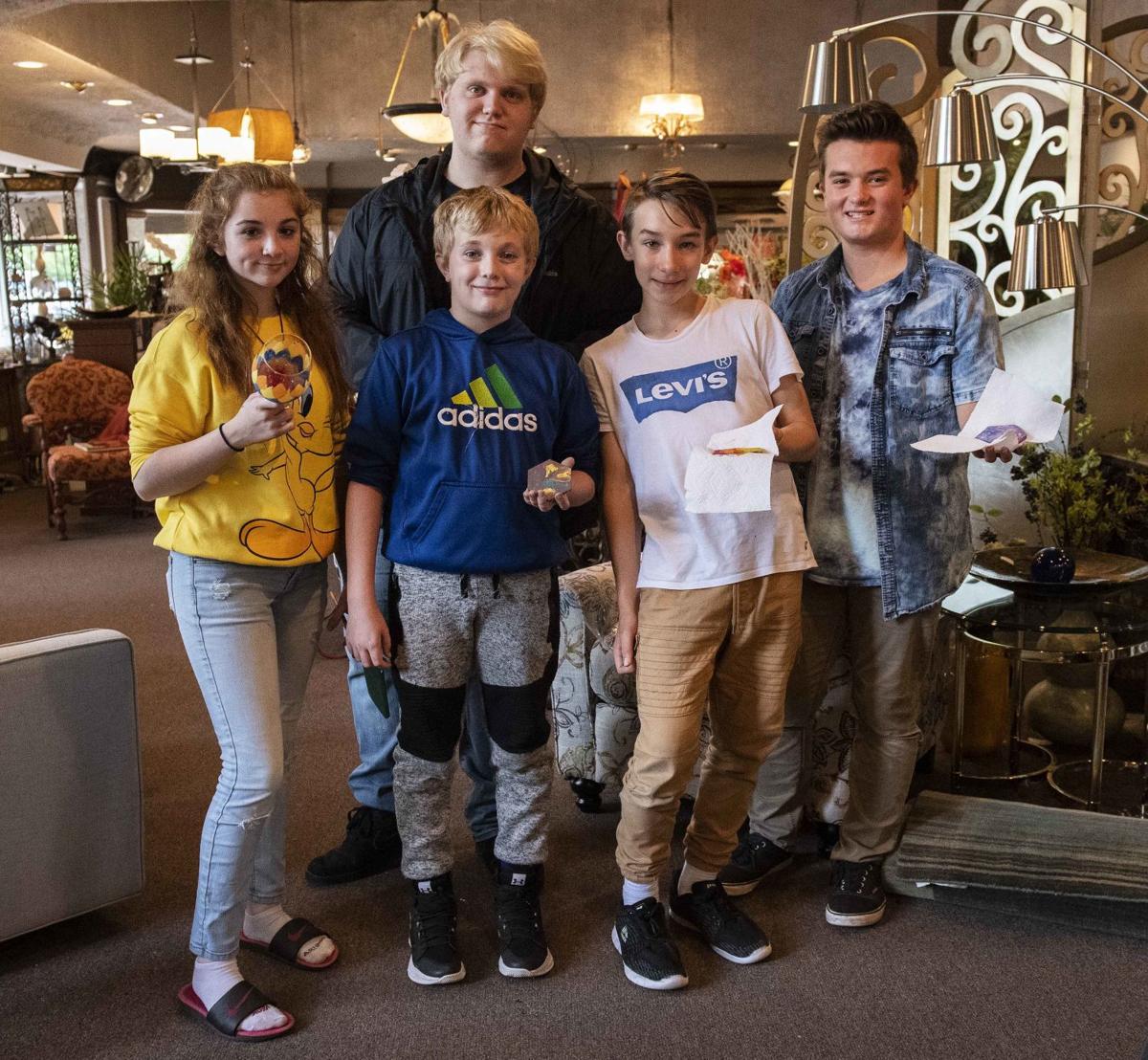 From left to right: Justiz Berlinger, Jordan Johnston, David Beringer, Nathaniel Beal and Benjamin Beal show off their painted crafts from the Give More to Great ART fundraising event at Teague’s Interiors on Thursday.

The group is run entirely by eight unpaid volunteers, many of whom split their time with part-time jobs, Lile said. The small but mighty crew works hard to provide direct recovery services for more than 40 county residents.

But this year, with the help of Southwest Washington’s largest day of online giving, Hello Life wants to almost triple the number of people it can help in the coming year. The group’s goal is to raise $10,000 through Give More 24!, which ran midnight to midnight Thursday.

“We are so, so grateful to be part of Give More 24! this year,” Lile said. “For a grassroots, small nonprofit like ours, it really is a turning point to be able to participate in something like this. It gives us an ability to have a presence and to fundraise in a way we otherwise would not be able to do.”

Give More 24!, organized by the Community Foundation for Southwest Washington, benefits more than 170 nonprofits in Cowlitz, Clark and Skamania counties. Now in its sixth year, the fund drive aimed to raise $1.6 million this year. It has raised a total of $4.4 million during it first five years.

With the help of thousands of donors, the fundraiser brought in more than $1.1 million by 5 p.m., shortly before TDN’s press time.

“And another big bump comes after 5 p.m., when people get off work and back to their personal lives. They see the emails from friends asking them to jump in on the day,” said Maury Harris, spokesman for the community foundation.

Lower Columbia School Gardens, one of nearly 30 Cowlitz County nonprofits signed up for the fund drive this year, wanted to capitalize on the after-work boost with their Give More 24! “happy hour” event at Roland Wines in Longview.

The group was vying for one of the prizes distributed throughout the day by the community foundation and its partners. The prizes provide a $1,000 donation for the nonprofit with the most unique donors between a certain time period.

The garden program earned the Cowlitz Community! Prize for earning the most donors between 11 a.m. and noon Thursday.

“We ask people generally to hold off until the prize windows. … For the first part of the day, that means there is not much coming in and not that many people. And then all of the sudden it just kind of floods in,” Thompson said.

Despite a bit of friendly competition for the community foundation prizes, the nonprofits generally work together to gather donors for Give More 24! It’s a phenomenon Harris called “co-opetition,” a blending of cooperation and competition.

Diane Perron, executive director for Cowlitz County Habitat for Humanity, said she had donated to at least four other nonprofits. Her organization, a six-year veteran of Give More, also helped newer nonprofits promote their fundraisers on social media, she said.

“We have a very generous, giving community, and I think having this kind of community event reduces that competition,” Perron said.

Thompson summarized the feeling like this: “We are happy that our group is able to raise funds for our program, but we are also looking at (and excited for) all the other great groups raising for their causes at the same time.”

The “co-opetition” even spread to some local businesses that promoted nonprofits and their events to customers. Lisa Apo, owner of of Pretty Please hair and nail salon, said she told her customers about the Art Renaissance Team event at Teague’s Interiors on Commerce Ave.

“We had a full salon and gathered donations, and then (ART) came over and hand-delivered crepes,” Apo said.

Those donations to ART will help fund a Dale Chihuly art installation in Longview. Chihuly is a world renowned glass artist and Washington native.

“Someday it’ll be like having a Michelangelo,” said Retha Porter, chairwoman for the group and a crepe chef for the day. ART also invited donors down to Teague’s Interiors Thursday to paint their own wine glasses — a nod to the art project their donations will help fund.

“We probably had about 50 people come through. … It brings not only (financial) resources but also awareness to the project, and that’s very valuable,” Porter said.

Lile said awareness was key for Hello Life, a first-year participant in Give More 24!

Of course, the financial aspect of the fundraiser was also cause to leave Lile “insanely happy.” About 14 hours into the fundraiser, Hello Life had raised about $5,400 — more than half of its goal.

“That’s more than we’ve raised in three years of fundraising (on our own),” Lile said. “To think of what this can do for people who are battling eating disorders and really trying to fight for their life back, it’s beyond words.”

Donations to the Give More 24! campaign can be made online at www.givemore24.org. Donors can browse a complete list of nonprofits and select which causes they want to give to. The site also features live leader boards that show which organizations are attracting the most funds and donors.

Give More 24! events and entertainment

More Houses, More Hope 4 – 8 p.m. at Mill City Grill 1260 Commerce Ave. Cowlitz County Habitat for Humanity is hauling two-by-fours to Mill City Grill for a unique evening of giving. Make a donation at one of the giving stations and you’ll be entered into a special raffle, or just stop by for some food and the unique opportunity to sign one of the studs that will frame out the next Habitat for Humanity home in Cowlitz County.

Give More for Community Music 5 – 7:30 p.m. at Country Folks Deli 1329 Commerce Ave., Longview, WA 98632 - Southwest Washington Symphony is raising funds for its free concert series by presenting an evening of mini-concerts. Enjoy five different ensembles made up of musicians from the Symphony and order some great food and drinks.

Kalama Harbor Concert for Emergency Support Shelter 5- 9 p.m. at McMenamins Kalama Harbor Lodge 215 N Hendrickson Drive, Kalama.S it back, watch the ships roll in and watch them roll out again, all while savoring the sounds of local singer-songwriter Tate Peterson and free hors d’oeuvres.

Coffeehouse Acoustic to benefit the Caring Pregnancy Center 5:30– 8 p.m. at The Electric Bean 946 Washington Way, Longview. Wind down your workday in a relaxing atmosphere with your favorite latte and some live classic rock and a mix of country & pop. Donations of diapers, wipes, baby wash, shampoo, lotions and size 0-3 month winter outfits or sleepers are welcome.

US to spend $2.1B to improve infection control

Brian Thompson can more or less count his major auditions on one hand.

Chris Wills, left, Jen Wills, right and Reuben and Gail Bishop, center, enter their donations for Give More 24! during a "happy hour prize party" for the Lower Columbia School Gardens, one of the nearly 30 Cowlitz County nonprofits participating in southwest Washington's largest day of online giving.

Retha Porter, an ART committee chairwoman, whips up a fresh lemon crepe during the Give More to Great ART fundraising event at Teague’s Interiors on Thursday.

From left to right: Justiz Berlinger, Jordan Johnston, David Beringer, Nathaniel Beal and Benjamin Beal show off their painted crafts from the Give More to Great ART fundraising event at Teague’s Interiors on Thursday.