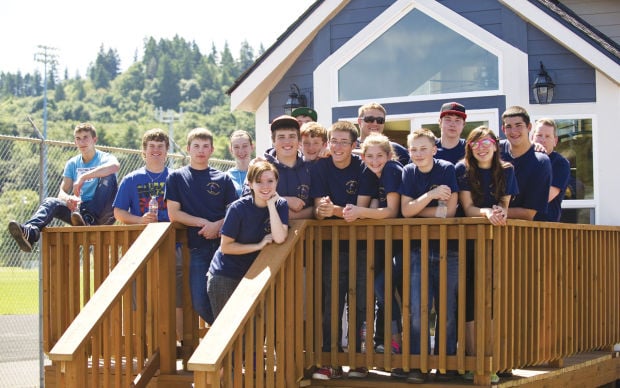 A few of the 65 students in Kelso High School’s inaugural Geometry in Construction class gather Monday on the front deck of the park model home they built. 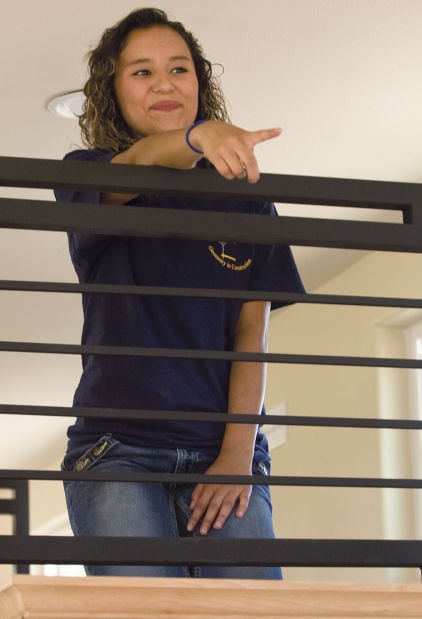 Sophomore Dionna Aguas kneels in the home’s loft, pointing out some of the features below.

“This class was a great experience,” said sophomore Dionna Aguas, 15, one of more than 65 eighth- through 10th-graders who took the vocational class in its inaugural year. “Meeting new people and applying math to the real world was the best part.”

The students learned how to apply what they learned in geometry class directly to the construction project — such as getting every corner perfectly square and using trigonometry to calculate the height of stairs.

Geometry teacher Doug Engebo and wood shop teacher Cory Torppa spent a year laying the foundation for the class with assistance from vocational coordinator Cindy Wardlow. A $13,000 grant from Lowe’s Home Improvement and model home blueprints from Fleetwood Homes helped launch the class in autumn. Additional donations of materials, training and money then came in from more than 40 sponsors, Torppa said. Sponsors’ names are displayed on the chain-link fence around the home next to Ed Laulainen stadium.

“Without the sponsors and donations, we would never be able to do what we have done,” Torppa said. “The only way (the program) can survive is with the help and support of the community.”

“There are already three people interested in buying it,” Torppa said, noting that all proceeds go back into the program.

“We haven’t been able to enjoy it till today,” Torppa said. “We’ve been working hard from start to finish. But the big thing for the kids was to realize when you have deadlines, you find a way to make it happen.”

At Monday’s open house, Dionna led a tour of the home, pointing out its features.

“This is our portable deck,” she said. ”When we move the house, the deck will be detached. ... This is the living room. All the windows were donated. The cabinets were handmade and the doors were donated. All the lighting is LED. ... Here’s the kitchen. All the granite was donated. That’s the ductless heating up there. It was donated. If it’s too hot in the kitchen it takes the heat and makes all the house the same temperature.”

The house also includes a bathroom with a sit-down shower, a carpeted master bedroom and a carpeted sleeping loft with a railing handmade by a Kelso High junior in welding class. The vinyl floor in the living room and kitchen is faux hardwood.

“I would recommend this (class) to the up-and-coming freshmen,” he said.

“I’m very excited” that the house is done,” he said. “I take pride in building this house.”

“It helped me a lot with building skills and math,” said Blake Fletcher, 15. “And it is very fun.”

He said he enjoyed building the walls and doing the electrical work, and can see himself someday building his own home and working in the construction trades.

Construction is still an atypical field for women, and Dionna said she and her female classmates raised a few boys’ eyebrows when the class began last fall.

“I said, ‘Guys — step aside,’” Dionna said with a laugh and a swoop of her hand. She said when she graduates, “I think (working in) construction would be cool. Like I told Torppa, ‘If you put your mind to it, nothing’s impossible.’”

Torppa said the biggest challenge, other than the short daily class period, was “teaching a generation of students that is OK with working 70 percent and 70 percent quality.”

Because the home was being built to sell, he had to make the students re-do their work many times — thereby teaching another skill that will serve them well in the real world.

Here’s your chance to own the house that math built.

A few of the 65 students in Kelso High School’s inaugural Geometry in Construction class gather Monday on the front deck of the park model home they built.

Sophomore Dionna Aguas kneels in the home’s loft, pointing out some of the features below.