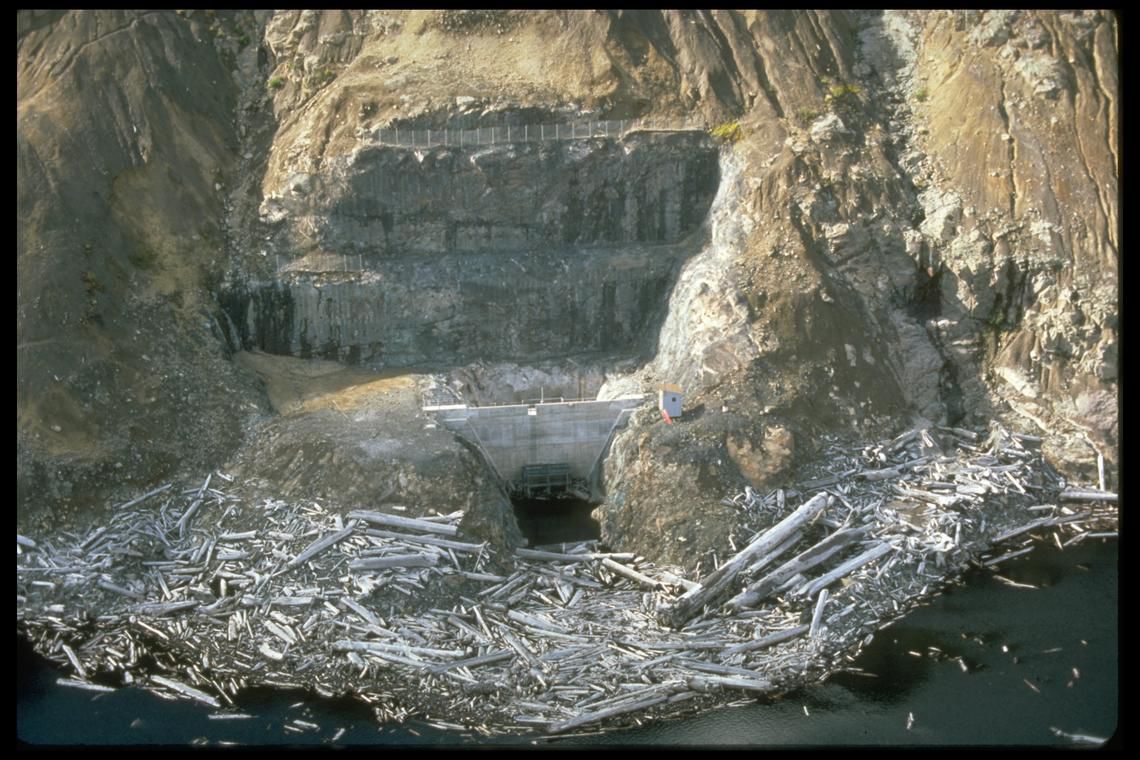 Logs push against a barrier that prevents them from clogging the inlet to the Spirit Lake drainage tunnel. Water gets into the tunnel by flowing through the cast iron gate embedded in a concrete headwall, then falling down a shaft to the tunnel. The inlet gate needs replacing, according to the U.S. Army Corps of Engineers. 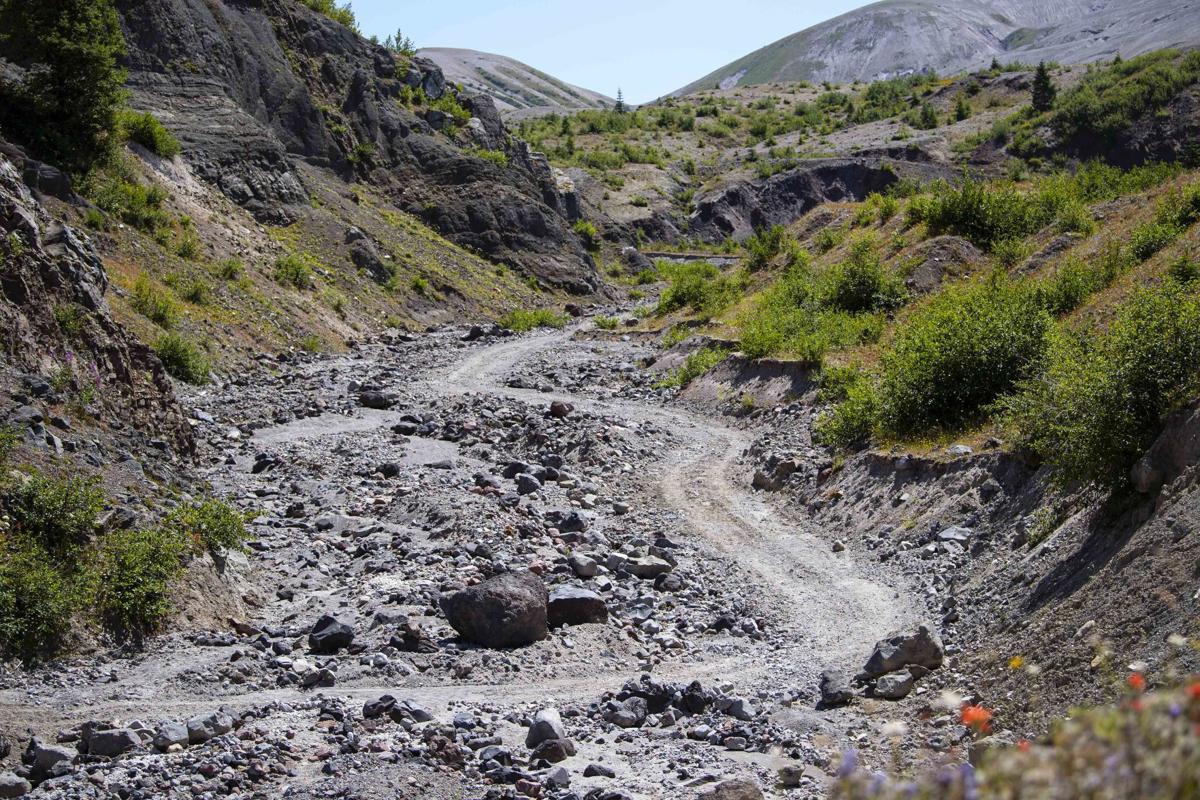 A dirt path, which starts near the Truman Trail on Mount St. Helens, winds toward a Spirit Lake access point.

“This is a difficult trade-off to make,” Spirit Lake Project Manager Chris Strebig wrote in acknowledging the adverse effects on research that a new access road through the pumice plain, the area at the foot of Mount St. Helens, could create.

The multifaceted project focuses primarily on Spirit Lake’s drainage issues caused by the 1980 Mount. St. Helens eruption. Debris from that explosion blocked the historic outflow of the lake, and engineers built a tunnel to drain the lake and prevent a catastrophic flood.

The 35-year-old tunnel needs extensive repairs, and were it to fail, the lake could rise, break through the debris blockage and cause disastrous flooding in the Cowlitz and Toutle valleys.

Re-establishing the primitive road from Windy Ridge to the south shore of the lake would allow drill rigs to access the area to take core samples of the debris blockage holding back the lake. It also would make it easier to replace the aging intake gate on the 1.5-mile drainage tunnel that keeps the lake at a safe level.

But scientists and conservationists are concerned that building the road would trash research plots, introduce invasive species, tempt unauthorized motorists and otherwise jeopardize the long-term recovery and research of the pumice plain. It is one of the most heavily researched landscapes on the planet.

The Forest Service considered one such alternative, according to the draft decision: Building a shorter 2-mile access road to Duck Bay at the south end of the lake and relying on helicopters and watercraft to shuttle workers and equipment to the tunnel. But the agency deemed the plan too risky for staff, some of whom would be taking daily or twice-daily helicopter trips during repair of the tunnel. It would also require a new barge loading facility at Duck Bay and delay the overall project by at least a year.

Instead, the proposed 3.4-mile access road would be built along an old road used by the U.S. Army Corps of Engineers in the early 1980s that generally tracks along the Truman Trail. Public access to the Truman Trail would be limited or at times closed during the project to repair the tunnel, which officials have said could take up to two or three years and cost $5 million to $15 million.

The Forest Service’s proposal would replace the drainage tunnel’s single corroded inlet gate and install an additional backup gate. Crews would also drill through the volcanic debris that’s dammed up the lake to better understand the blockage. And a barge loading facility and a staging area, totaling abut six acres, would be built on the grounds of the old pumping station at Harry’s Ridge.

The initial preparation work to repair the tunnel would take one or two seasons, Strebig said. (Construction work near Spirit Lake can only be done in the summer while the weather is favorable, he said.) Replacement of the intake gate would take an additional year. If the project was green lit and engineering began next summer, the tunnel gates could be repaired by 2023.

If no objections are raised in the 45 days following the release of the draft Decision Notice, then a formal decision could be signed allowing the Forest Service to move forward with the access road plan, Strebig said.

Detailed information on the project as well as links to provide new comments, or review old comments, can be found online at www.fs.usda.gov/project/?project=57259&amp;exp=overview.

Logs push against a barrier that prevents them from clogging the inlet to the Spirit Lake drainage tunnel. Water gets into the tunnel by flowing through the cast iron gate embedded in a concrete headwall, then falling down a shaft to the tunnel. The inlet gate needs replacing, according to the U.S. Army Corps of Engineers. 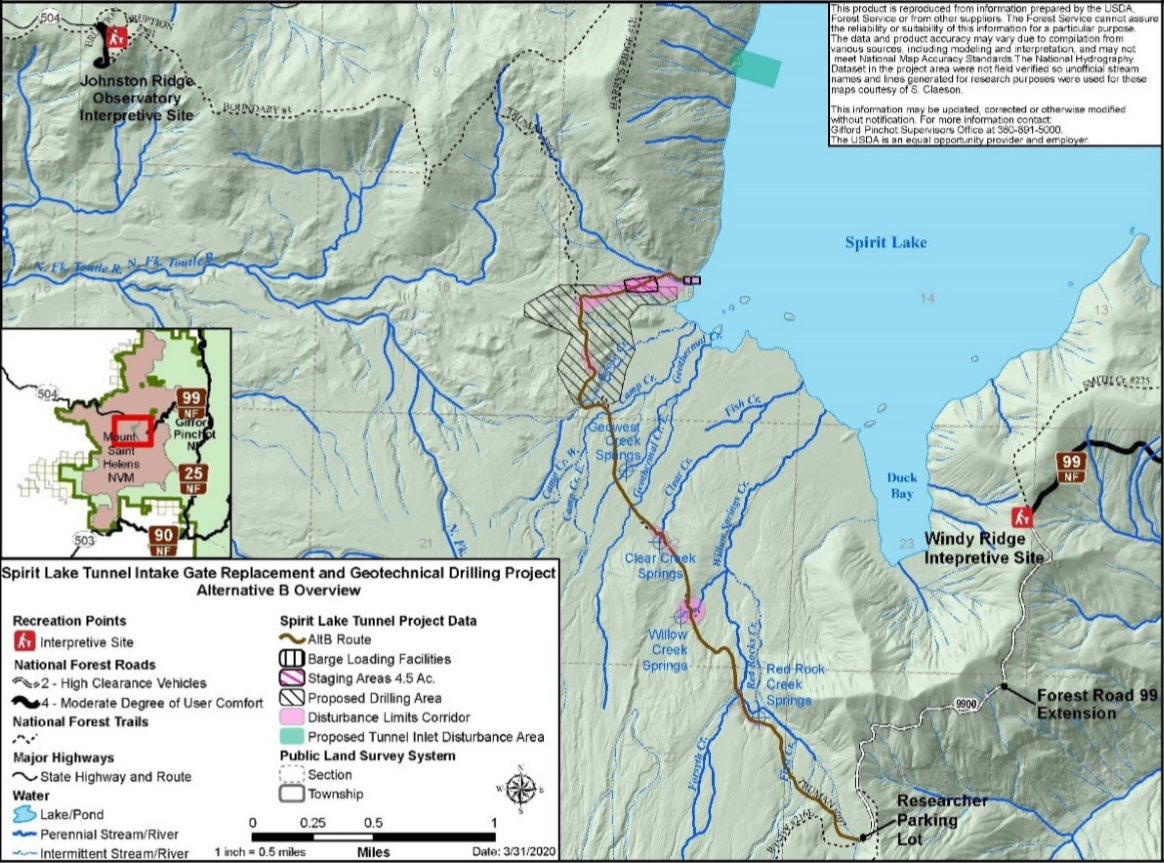 A dirt path, which starts near the Truman Trail on Mount St. Helens, winds toward a Spirit Lake access point.