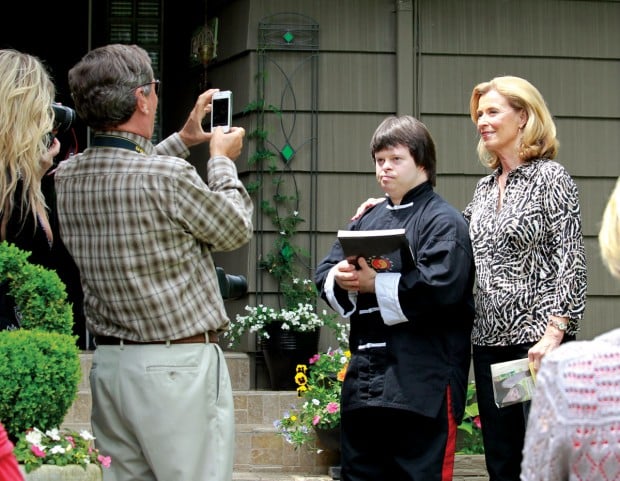 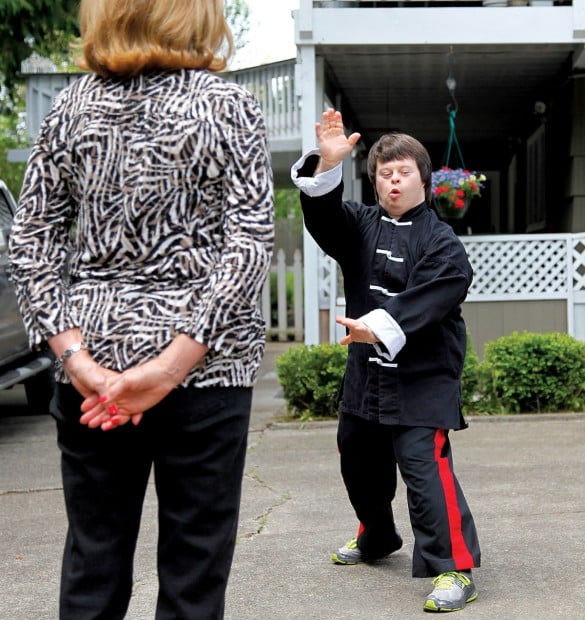 Dustin Bean, 33, demonstrates some of his favorite moves for Linda Lee Caldwell, who came to Longview on Thursday to meet Dustin after reading a story about him earning a Kung Fu blackbelt — despite having Down syndrome — to be like his hero, Bruce Lee.

Dustin Bean of Longview punched and kicked at the air Thursday in perfect synch with the Bruce Lee movie fight scene on the TV in his bedroom.

Dustin, who is 33 with Down syndrome, knew every minute of the 1972 film "Fist of Fury." When Lee began fighting off his attackers with nunchucks, Dustin, who earned his black belt in Kung Fu in April, grabbed his nunchucks and began swinging.

The smiling woman watching the performance in the small bedroom took a step back.

"Wow. That's hard to do," the visitor said, clapping her hands.

"You are the Little Dragon," she said, touching Dustin's shoulder. "Well done."

It was no ordinary compliment. The woman was none other than Linda Lee Cadwell, who was married to Bruce Lee from 1964 until 1973, when the martial arts legend died unexpectedly of a cerebral edema. In the years since, Cadwell published the books "Bruce Lee: The Man Only I Knew" and "The Bruce Lee Story." Her son with Bruce Lee, actor Brandon Lee, died in a movie-set accident while filming "The Crow" in 1993.

"I was just so impressed that anybody would have the perseverance to spend 13 years of getting a black belt," especially a man like Dustin, she said.

Cadwell and Bruce Cadwell, her husband since 1991, spend summers in Boise, Idaho, and winters in Southern California, but this week they were helping Bruce Cadwell's sister, Kerry Syverson, move from Vader to Centralia.

Thursday, Dustin was waiting in the driveway with TV news crews from Seattle and Portland when Cadwell's SUV pulled up at 1 p.m. Dressed in a black Kung Fu jacket with white frog closures and white cuffs, Dustin appeared stoic and calm as the polished woman with the perfect blonde bob approached.

Linda Lee Cadwell took Dustin's hands in hers. She was honored to meet him, she said gravely.

"I'm very proud of you, and you know Bruce Lee would have been very, very proud of what you accomplished," Cadwell said. "You look like him. He wore a jacket like that all the time."

Dustin gave her a card containing a letter he'd written the night before. Cadwell presented him with copies of "Tao Jeet Kune Do" by Bruce Lee, and "Bruce Lee — Wisdom for the Way," a book of Lee's proverbs compiled by his daughter, Shannon Lee.

"I want Dusty to soak this up because it really is all about him," said Steve Larson, his Kung Fu teacher and martial arts studio owner.

Inside the house, Dustin's sister, Kelso High School art teacher T.J. Frey, coached him to ask Cadwell the questions he'd harbored about his idol. Did Bruce Lee really make the cat noises during his fight in "Way of the Dragon" or were those sound effects added later? Yes, Bruce Lee indeed made those noises, Cadwell said.

"Those were our cats (in the film) — a little known fact," she said. "And Chuck Norris really is that hairy."

Dustin also had wondered what Bruce Lee's personality was like, Frey said.

Dustin showed her his bedroom. Above his Asian bedspread and display of samurai swords was a large mirror. He popped "Fist of Fury" into the DVD player and stood with his arms folded, reciting dialogue along with Bruce Lee. Then the fighting began and Dustin burst into a flurry of action.

Her late husband would have loved seeing Dustin act out his movie scenes, Cadwell said.

"It's a huge compliment to Bruce," said Cadwell, who met Bruce Lee when he gave a Kung Fu demonstration at her high school. She soon became one of his Kung Fu students.

"I'm experiencing a very big moment in my life, to honor his (Dustin's) achievement. I'm honored to be here," she said. "He touched a heartstring, for sure. He's so sincere, very sincere. ... It certainly gets to me to see him do those moves because he does do them with intensity, which is how Bruce would do them."

For Dustin, the meeting carried a deep significance — it brought him closer to Bruce Lee.

"I feel his presence," Dustin said.

Nearly a decade after meeting, Dustin and Katie Bean thrilled to be newlyweds

In many respects, Longview residents Dustin Bean and his new bride, Katie Bean, are like many other newlyweds. They play Wii bowling together. They work out at the YMCA. They watch the “Twilight” movies and playfully call each other Bella and Edward. They have pet fish and talk about getting a dog. They’re eager to show off their new wedding rings to visitors.

Dustin Bean stood at the foot of Bruce Lee's headstone at Lakeview Cemetery in Seattle.

Dustin Bean, 33, demonstrates some of his favorite moves for Linda Lee Caldwell, who came to Longview on Thursday to meet Dustin after reading a story about him earning a Kung Fu blackbelt — despite having Down syndrome — to be like his hero, Bruce Lee.