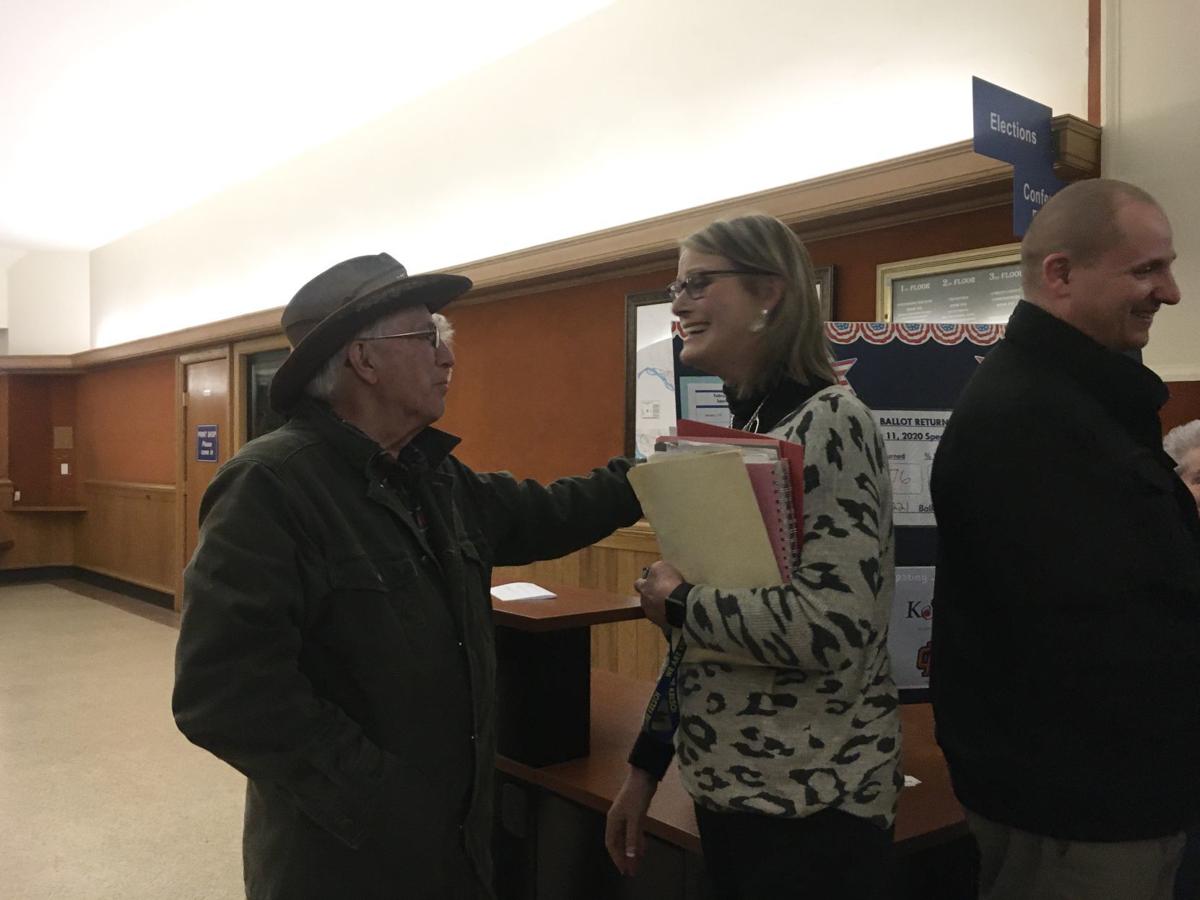 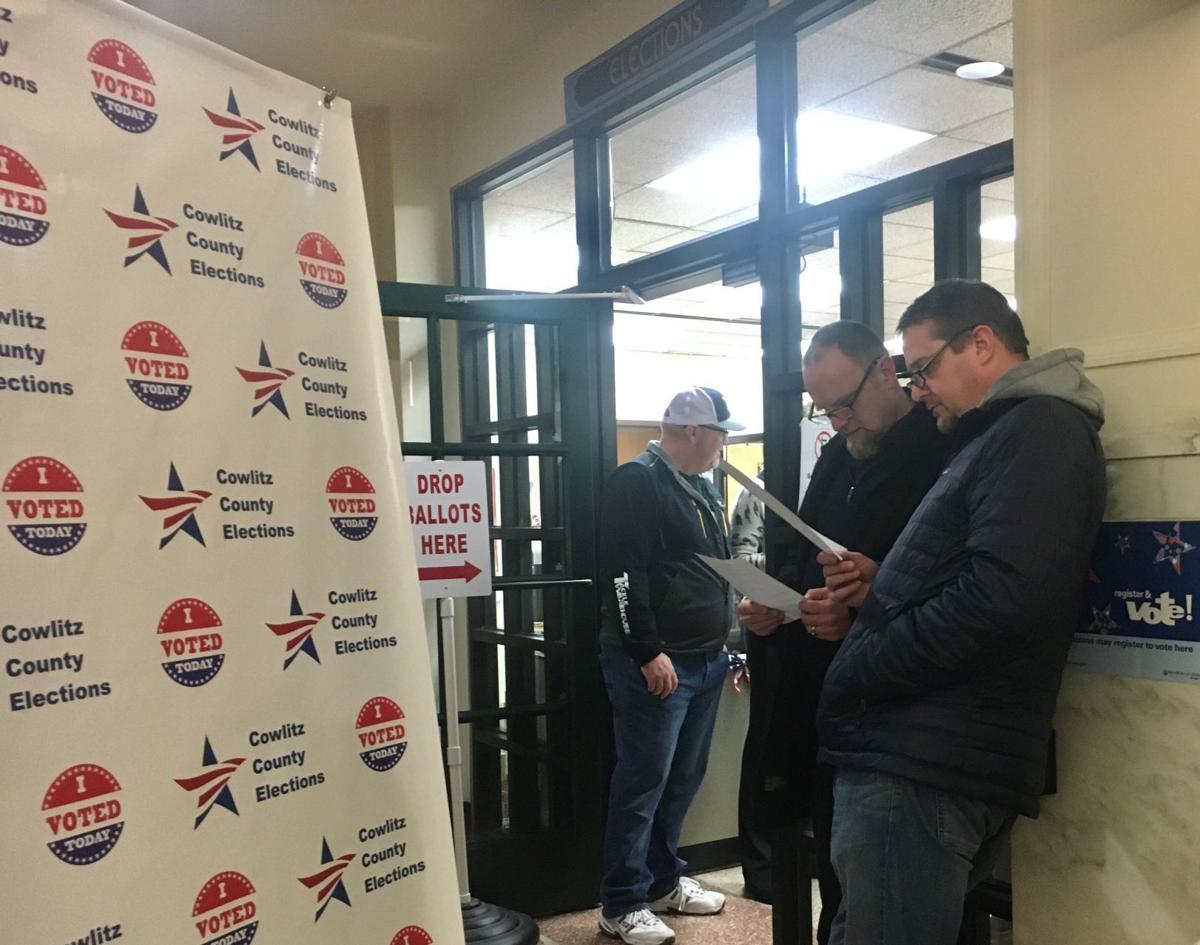 Kalama Superintendent Eric Nerison, left, reacts to the district's failure to pass a replacement levy Tuesday night outside the election office in Kelso.

The Feb. 11 ballot measures are slated to replace current levies that expire at the end of 2020. Overall, voter turnout is hovering at 35.6%, similar to the turnout of last year's special February election.

The state school funding model depends on levies, which tend to make up a significant part of district budgets.

Longview’s levy passed with 57.3% of the vote, or 5,634 to 4,204  in Tuesday;s returns. Superintendent Dan Zorn said he was grateful for the community's support. The levy accounts for about 13% of the district's budget.

“First and foremost, we couldn’t be more thankful for the community support," Zorn said. "The replacement levy passing means the district can continue the efforts which have led to high school graduation rates being well above the state average and growth in student achievement levels.”

Zorn said the levy dollars go "directly to the classroom."

“The entire Longview schools team is focused on providing our students a high-quality education and options after high school for a bright future,” Zorn said.

Kelso’s levy passed with 56.6% of the vote, winning 3,150 to 2,410. Superintendent Mary Beth Tack, who gathered at the Cowlitz County Elections Office with levy supporters, said she was thankful for the "tremendous support."

"Thank you to everyone involved in the successful passage of our levy," Tack said. "Our district can continue a tradition of doing great things for the students and community of Kelso."

School board president Mike Haas said that he "doesn't take the community's generosity for granted."

"Kelso citizens have made a significant difference in the educational experience students will receive," Haas said.

Kalama's levy failed, with a 55% no vote. The tally was 1,084 no, 886 yes, marking the first time in decades that the district failed to pass a levy, said Superintendent Eric Nerison.

The levy would have provided about 24% of the district’s budget, and the district likely will submit voters another request for a  replacement levy in April, Nerison said.

We‘re disappointed in the results,” he said. “It’s an operations levy, so without that levy in place we can’t run the district. We will have to go back out. But before (that) we need to understand from the community what it is that we can do to clarify questions that may have gone unanswered, address concerns that may have existed in the campaign that we had.”

Nerison said the Kalama community has been very supportive, noting that in 2018 voters overwhelmingly passed a bond and a levy. He said some people may have been confused about the difference between a bond and levy, whether the levy was a replacement and why the rate increased because of how the Legislature's "McCleary fix" affected the rates the last two years.

The district will regroup and try to understand and address voters' concerns,  Nerison said.

Superintendent Michael Green said he expected a close race but was surprised nevertheless. He speculated that many people were “complacent” about voting. He said other taxes have increased, and November’s election showed a negative response to state and local taxes.

Green said the school board will likely meet in the next week or so to map out a plan forward. The district will ask voters for a levy again in April, he said. The levy would have financed about 12% of the district's budget.

“Without these essential funds, there’s no way we can maintain anything close to a program like we have,” he said.

Toutle Lake’s levy passed with 52.9% of the vote, winning 608 yes to 542 no votes. Superintendent Bob Garrett said the word of the night in Toutle was "grateful."

"On behalf of the entire district, I express my sincerest appreciation to our voters," Garrett said. "Thanks to them we can continue striving to build our culture of hope one day at a time."

Toutle Lake asked voters for a rate of $2.50 per $1,000 of assessed value, which will collect between $1.4 million and $1.7 million annually over the next four years.

The Wahkiakum School District asked voters to approve a $28.75 million bond, but the measure won only 33.2% of the vote Tuesday night. Bonds need a 60% supermajority to pass.

The bond would have paid to improve districtwide safety and security and renovate and expand all three schools. The district had estimated that taxpayers would be charged $3.37 per $1,000 of property value over 22 years if the bond had passed.

Kalama Superintendent Eric Nerison, left, reacts to the district's failure to pass a replacement levy Tuesday night outside the election office in Kelso.