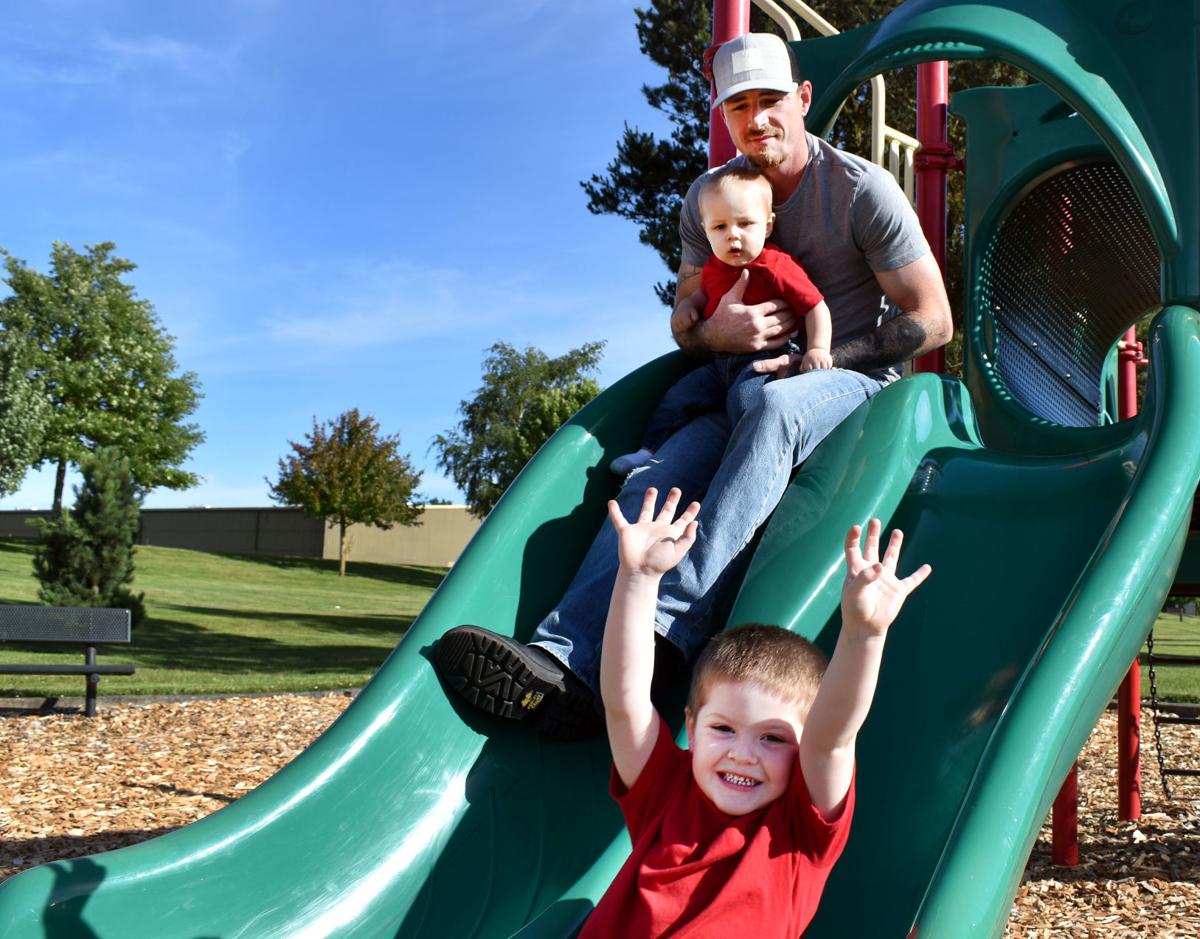 Jake Kunkle holds his 8-month-old son Colton, while his 4-year-old son Landon slides down ahead of him on a recent sunny afternoon at Longview's Seventh Avenue Park. 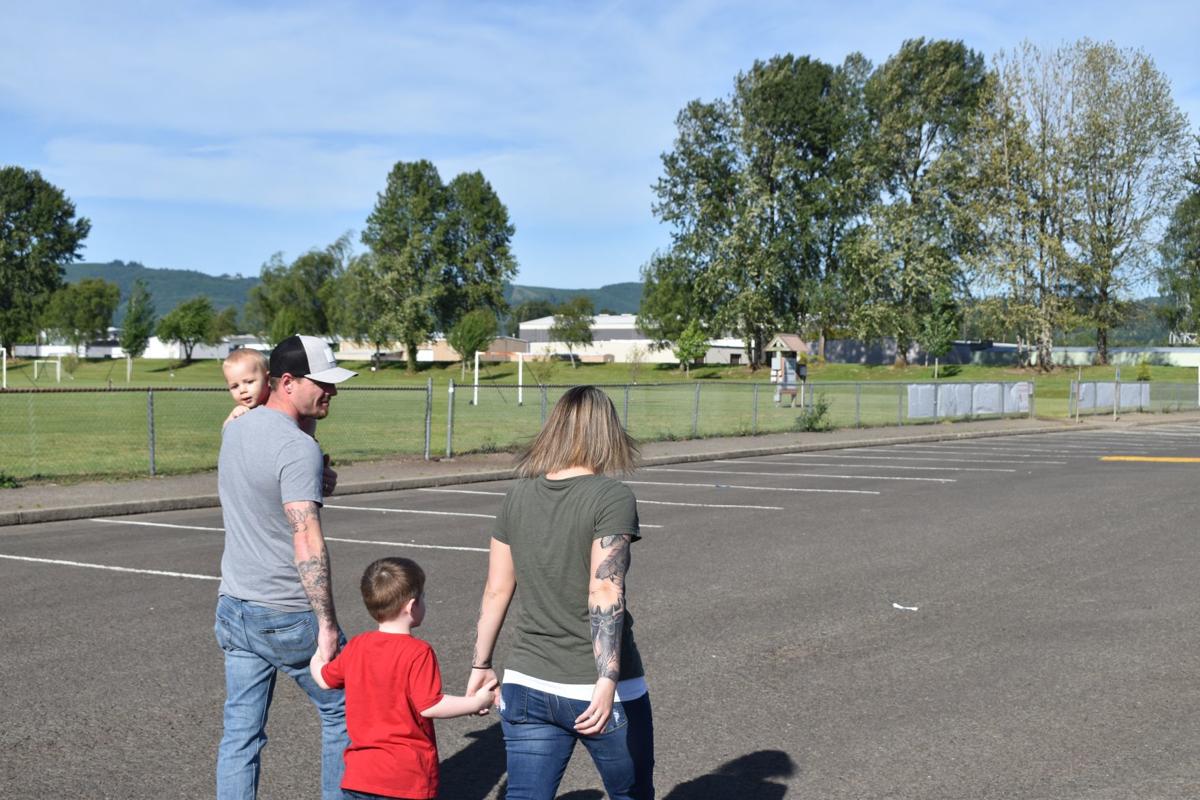 On a warm June afternoon, Jake Kunkle bounces his 8-month-old son Colton on his lap. His 4-year-old son Landon is a bolt of energy, running through their Seventh Avenue apartment in Longview while Kunkle’s fiancee, Nichole Davidson, has her niece and nephew over to visit. In the background, an episode of Pokémon fills in a rare quiet moment.

“I wish I had that much energy without caffeine,” Kunkle, 31, jokes as Landon bursts back into the room.

It’s a quintessential domestic moment for Kunkle and Davidson, 26, a full-time student at LCC. But around this time two years ago, Kunkle was fighting to kick drug addiction and remain in his family’s life.

Kunkle said he owes his transformation over the last three years to several factors, including the love of his family and his fiancee, who is herself in recovery from drug addiction. He credits the support from his counselors in the court and treatment systems, too. And Kunkle said he also owes his resurrection to fatherhood, which changed his perspective on family life.

“I didn’t get it before. I always thought, ‘I’m not hurting anybody but myself,’ ” Kunkle said. “I knew it wasn’t really true then, but I was good at justifying and minimizing things … I held (my family) hostage. I didn’t even understand the depth that it went, and I probably won’t.”

Kunkle had been in trouble with the law since he was 20 and can’t recall how many times he’s been booked into jail.

His addiction to heroin and methamphetamine began while he attended Kelso High School. But Kunkle said the death of his father, who was also an addict, led to him to drop out of school. He said he was unable to cope with his feelings of loss and anger, and his pride and ego kept him from seeking help, Kunkle said.

“It was misery,” Kunkle said.

Several times he sobered up, got his driver’s license reinstated and found work. But he inevitably relapsed, couldn’t hold down a job and ended up back in jail. That cycle ran faster every time, Kunkle said.

“It felt like my loved ones were expecting it, so it became easier to do each time,” Kunkle said. “I was used to disappointing people.”

Then, three years ago, Kunkle was arrested by Longview police on suspicion of possessing a stolen car. He opted into the county’s Drug Court program, which dismisses charges for selected defendants who admit to the crime and acknowledge their drug problem.

Most people take more than a year to graduate from drug court, and many who do stumble along the way. Kunkle was one of them: He went on the run and was arrested twice early on in the program, frustrated and embarrassed that he wasn’t making more progress.

“They want you to be honest with them,” Kunkle said. “I struggled with honesty when I first got clean. … My ego constantly got in the way.”

In early 2017, Kunkle reconnected with Davidson. They had dated on-and-off for years but split because of Kunkle’s drug use, he said. Landon’s biological father was no longer in Davidson’s life, so Kunkle “fell in love with him” and took over as his dad. (Kunkle now is in the process of legally adopting Landon.)

But around August that year, Kunkle relapsed again, running away from home and drug court.

“I tried to push everybody I cared about away from me. ... And I’d be gone for days at a time, and (Landon) would call me, and it would break my heart. He’d be like, ‘Daddy, where are you? When are you coming home?’ And I didn’t know how to deal with that.”

Davidson is five years clean from her own addiction to heroin. She stood by Kunkle, she said, because she knew the struggles of addiction firsthand.

“I told him that I loved him,” Davidson said, “(and) when he decided to come home and be clean, I’d be here for him.”

When he returned home around November of that year, Kunkle said he felt it was his last chance.

So he started taking treatment more seriously. He attended more 12-step addiction recovery meetings and acted on the suggestions his counselors gave him. Around that time, Davidson became pregnant with Colton, and Kunkle noticed he was becoming more comfortable talking about his bottled-up emotions with his counselors at Drug Court and Awakenings, a Kelso rehabilitation center, especially about his father’s death.

“I was raised, men don’t express their feelings. We’re tough,” Kunkle said. “And that’s not the case. We’re human. And it’s OK to have feelings and emotions and express them.”

When Colton was born, Kunkle was “a nervous, blubbering wreck.” Standing alongside his family as Davidson went into labor, it was the most emotionally overwhelming moment he had ever experienced.

“Grateful for what I have”

As the months passed, Kunkle started appreciating moments that he wouldn’t pay attention to before, such as Landon’s birthday parties or a family visit to the Toutle river.

“I remember Landon playing on the beach, Nichole knee-deep in water, and me just sitting there, feeling grateful for what I have.”

Kunkle said he hasn’t used drugs in a year and a half and has held down a job for the last 17 months. He’s currently a lead supervisor at Ecorrcrate, a Kalama-based shipping crate manufacturer. In August, he and Davidson are getting married, and he hopes to graduate from Drug Court that month, too.

“When you’re on drugs, you may be there, but you’re not there,” Davidson said. “Your body is there, but your mind is somewhere else.”

Fatherhood opened Kunkle’s eyes to how much stress his own family faced because of his actions. Getting clean gave them their lives back too, he said. When he talks with his mom on the phone now, it’s about work and how his kids are doing, rather than whether Kunkle is hungry or has a place to sleep.

And he’s grateful that neither of his sons are old enough to remember his past. Instead, they’ll make memories at the park, fishing, and learning how to ride bikes.

“I want to be there to teach them right and wrong, and that feelings are okay, and how to deal with them instead of keeping them bottled up like I was taught.”

Jake Kunkle holds his 8-month-old son Colton, while his 4-year-old son Landon slides down ahead of him on a recent sunny afternoon at Longview's Seventh Avenue Park.