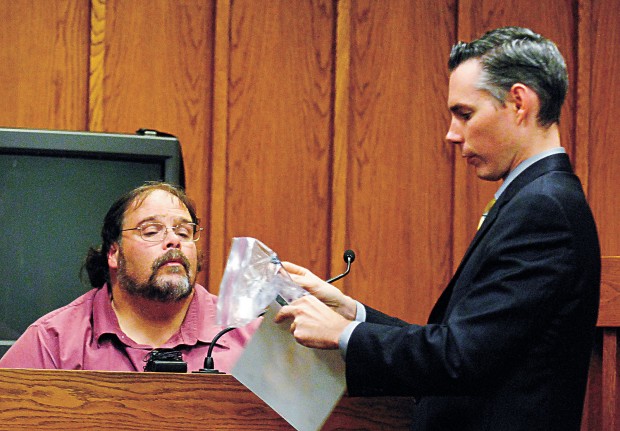 Defendant Jeffery Trebilcock, left, and prosecutor James Smith examine eyeglasses worn by one of the Trebilcocks' children on Wednesday in Superior Court. 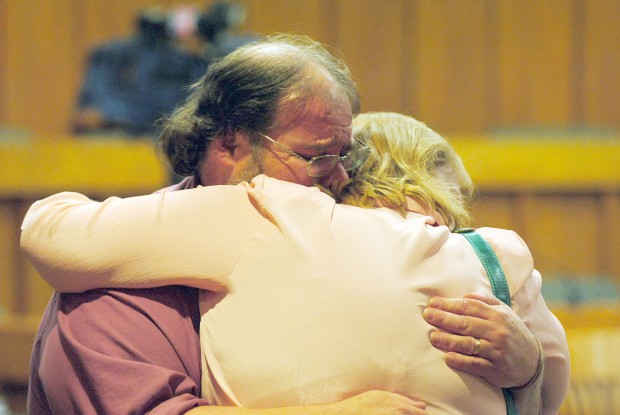 Jeffery and Rebecca Trebilcock embrace during a their trial Wednesday afternoon in Superior Court. 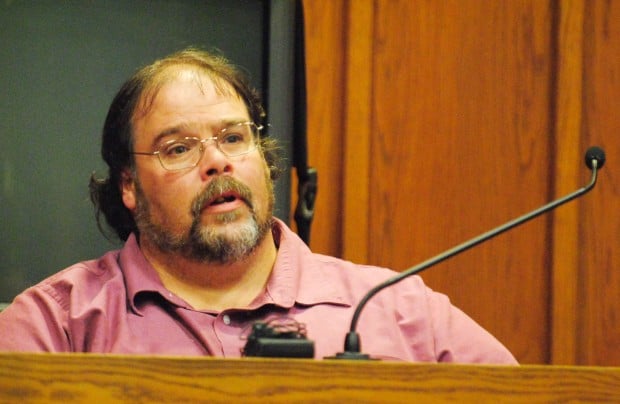 Jeffery Trebilcock took the stand in his own defense Wednesday afternoon, contradicting much of the testimony Judge Michael Evans heard from Trebilcock's adopted son.

Trebilcock and his wife, Rebecca, both 45, are charged with criminal mistreatment of their five adopted children. They were arrested in March 2011 after their adopted son, then 13, was hospitalized with malnutrition, hypothermia and extreme eczema that doctors said was brought on by prolonged neglect.

Under questioning from defense attorney Kevin Blondin, Trebilcock said he and his wife never abused their children.

"I told him it's not for little boys," Trebilcock said. "He said he wanted to taste it. He liked the taste of it."

The boy claimed his parents fed him on the porch in a plastic potato salad container they called his "trough."

Trebilcock denied forcing the boy to eat on the porch. He said the boy ate out of an extra-large bowl because "that's what he wanted," and it was his choice to name it "the trough."

"Did he get more food if he wanted it?" Blondin asked.

"Yes," Trebilcock said. "We never told him no."

He said the boy often vomited after meals. (Dr. Steven Gabaeff, who testified Tuesday, said he believed the boy had bulemia.)

He denied the boy's claim that the refrigerator and the pantry were locked. He said only a cabinet with prescription medication and dietary food for his wife was kept locked.

He acknowledged there were motion sensors in the house, saying he and his wife decided they were necessary because their son had been wandering into their bedroom and a sister's bedroom at night.

The boy claimed he was rarely allowed to wear shoes on the farm. Trebilcock denied this, saying he bought the boy a good pair of boots.

The boy claimed he was not allowed to use the bathroom at night, so he urinated in a cup and his parents forced him to drink it. Trebilcock said the boy was able to leave his room to use the bathroom nearby. He said there was a baby gate with a bell propped against the door of his son's bedroom so they could hear if the boy left his room, but that was not to prevent him from using the bathroom, he said.

The cup in his son's room, Trebilcock said, was "a special cup we gave him for being adopted" but he never drank from it. He said he was shocked that his son would claim he was forced to drink urine.

Blondin asked if anyone ever saw the boy do this.

Trebilcock said he and his wife were worried that the boy was not growing taller, but he said he never noticed how extremely thin the child was. Doctors said he weighed 49 pounds when he was hospitalized in March 2011.

Under cross-examination by deputy prosecutor James Smith, Trebilcock said he didn't realize the boy's weight loss because he never saw him undressed.

"You can see his bones, his rib cage," Smith said, showing him a photo taken in the hospital in March 2011. "His feet are blue. This isn't what he typically looked like?"

"I've never seen him without his clothes," Trebilcock said.

Trebilcock said he and his wife took the boy to Dr. Blaine Tolby in 2008 because they were worried about his lack of growth.

He said other than having him examined at Legacy Emanuel Hospital that year, neither he nor his wife took the boy to the doctor again until 2011.

Trebilcock was calm during most of the questioning, but he broke down in tears when he described driving his four adopted daughters to the Hall of Justice on March 10, 2011, to turn them over to Child Protective Services.

"I didn't really tell them anything," he said. "I didn't want to scare them."

When they reached the courthouse, "I told them they were going to go with this lady ... and that was it."

Early in his teenage years, Deric Whittington's already fragile family fell to pieces. He was placed in a foster home with one of his sisters.…

All five adopted children of Jeffrey and Rebecca Trebilcock, a Longview couple convicted of starving and abusing two of those kids, will remai…

An expert on child abuse testified that, in his professional opinion, Jeffrey and Rebecca Trebilcock's adopted son was suffering from neglect …

Forty-eight hours before authorities seized their adopted children and placed them in foster homes, Jeffrey and Rebecca Trebilcock loaded the …

The boy said his parents taped his mouth shut as a punishment. He was a teenager, but his parents forced him to wear diapers in public because…

The bench trial of a Longview couple accused of starving their five adopted children is scheduled to begin Monday.

Superior Court Judge Michael Evans on Friday reset the trials for Jeffery and Rebecca Trebilcock to Jan. 16 to give attorneys more time to prepare.

The trials for Jeffery and Rebecca Trebilcock will be pushed back, probably to late November, to give attorneys more time to prepare.

The trial date for Jeffrey and Rebecca Trebilcock has been set for Aug. 29, with a pretrial hearing July 22.

Five adopted children seized by the state after their parents were accused of starving them haven't attended school in nearly three months, st…

A judge on Tuesday allowed a 16-year-old boy to return to the Longview home of his parents, who are accused of starving and abusing their five…

A 13-year-old Cowlitz County boy was starved so badly by his adoptive parents that he stopped growing and, even as an adult, will be about 10 …

Defendant Jeffery Trebilcock, left, and prosecutor James Smith examine eyeglasses worn by one of the Trebilcocks' children on Wednesday in Superior Court.

Jeffery and Rebecca Trebilcock embrace during a their trial Wednesday afternoon in Superior Court.