The family of Justin Aguilar-Tofte, who was killed by Longview police Oct. 2, said Tuesday they were concerned by the department’s recent release of a video and timeline of the incident.

“Last week my family received a phone call from the Lower Columbia Major Crimes Team to inform us that in the interest of the public, they were prepared to release a video/timeline of the events that took place on 2 October,” Alderette said in the statement. “We expressed our concern since the investigation has not been completed, but agreed to their release.”

The stepfather said family members had decided to share their concerns even though they previously had said it wasn’t “prudent to form opinions of any kind until the investigation is complete.” The family feels that with the release of the police timeline, the public should also know the family’s concerns, he said.

Lower Columbia Major Crimes Team commander Troy Brightbill said that the most recent press release and video “is by no means the entire case” and was simply an initial report.

“There is quite a bit more information,” he said. “It will all be given to the prosecutor’s office to review when we are done with the investigation.”

Aguilar-Tofte, 33, was shot and killed by Longview Police Officer Jordan Sanders the afternoon of Oct. 2 near 14th Avenue and Cypress Street while fleeing from police trying to arrest him on a Department of Corrections warrant.

Brightbill said Aguilar-Tofte had a second warrant issued by Cowlitz County Superior Court on Oct. 1 for contempt of court, first-degree unlawful possession of firearm and other charges, but that warrant had not been entered into the Washington and National Crime Information Computer systems at the time of the shooting.

According to a Thursday police press release, Sanders used a TASER after Aguilar-Tofte continued to flee, “which had a limited effect” as he was able to get up and continue running.

Emergency medical services treated Aguilar-Tofte for about 20 minutes at the scene before taking him to St. John Peacehealth Medical Center, where he later died.

Alderette said he first wanted to thank the “family, friends and hundreds of public citizens for their overwhelming support” as the family grieves.

He added that even with the concerns the family has about the investigation, “our family continues to support and pray for the safety of our police officers, military and first responders.”

The family statement shared three facts to which it wanted to draw attention and three additional concerns it has with the investigation.

First, Alderette highlighted that this is the second fatal shooting incident Sanders has been involved with in a little over a year. Sanders has been with the Longview Police Department for nine years and is currently a detective with the Street Crimes Unit.

Brightbill, who is also a Cowlitz County Sheriff’s Chief Criminal Deputy, confirmed that Sanders was involved in the Sept. 8, 2019 shooting of Christopher Johnson, who was shot after a two-hour confrontation with police after they responded to a report of a suicidal man.

Brightbill said on average, the county has about one officer-involved shooting per year. In 2019, there were two incidents where police fatally shot someone: The September shooting of Johnson and the April shooting of Brian Butts, who killed Cowlitz County Sheriff’s Deputy Justin DeRosier.

Alderette said he also wanted to emphasize that the press release and video “confirms our son Justin never pointed, fired, attacked or struck, with or without a weapon, any of the involved officers. Even after he got shot by the officers, he just kept running away.”

The initial police press release also “confirms there was not one, but two officers on chase,” with at least one officer securing the perimeter, Alderette said, but he said he spoke with witnesses who said they saw up to five more officers in the area.

“Justin was tased once and fell to the ground multiple times. Officers could have used physical force to restrain him,” Alderette said. “However, not once did they even try.”

Brightbill said as the incident unfolded “a number of police” responded to the scene, in addition to the three previously named officers.

Brightbill added that as the TASER did not have a strong effect and Aguilar-Tofte was able to get “right back to his feet,” that was likely why officers did not attempt to detain Aguilar-Tofte, especially as they had concerns that he might have a weapon.

“You want them complying with your commands before you move in (to detain them),” Brightbill said.

Alderette also said he believes there is missing video. The video released by law enforcement uses footage from two cameras on the Woodworkers Local 536 building, but Alderette said there appears to be another camera located by the Motion Autos dealership between Oregon Way and 14th Avenue that has a “clear view of the deadly force specifics.”

Alderette said footage from the other two cameras were used to show the “so-called reach-in-his-pocket” moment and the chase and TASER use, but the third video “would absolutely be the perfect view to what really happened during my son’s homicide.”

Brightbill clarified that video released is not just from the Woodworkers Local building, but from multiple cameras are owned by three different businesses. Some of that video was synced with the dispatch audio to provide a timeline of the incident.

He added that not all video has been released to the public because the investigation is ongoing. He said the video he released was edited to provide a timeline and explain “what we determined from our investigation at that time, to be transparent and give the public some insight.”

“Again, this isn’t the final police report,” Brightbill said. “In a high profile investigation like this there is a public demand for information.”

He also said that "the appearance of a camera alone does not mean it is functioning or that it is oriented in a certain direction."

While he declined to share details, Alderette, a 24-year military veteran, also said the police’s initial processing of the crime scene and interviews were “incompetent” and shows a “lack of motivation” because he saw “numerous critical discrepancies.”

Brightbill said that the family had not contacted him with specific concerns, but he said “we have very good investigators in this who are being very thorough.”

“A press release is a snapshot of where we’re at, at that point of time, and it’s certainly not all of the information,” Brightbill said. “It’s the information I’m able to release to the public at this time.”

In the Thursday police video, a car that is labeled as associated with Aguilar-Tofte at one point can be seen following the officers and Aguilar-Tofte down the alley, but Brightbill said he was not able to give more detail about it yet.

This is the first officer-involved shooting in Cowlitz County that the Lower Columbia Major Crimes Team has investigated, Brightbill said.

Brightbill said that he understands that “any family in this situation, I expect there to be questions and concerns along the way. That’s natural. I know that our team is being very thorough in the investigation.”

Alderette ended his family’s statement by asking people to keep “all people involved in your prayers.”

“God is in control,” he added.

According to the Cowlitz County Sheriff's department, the Lower Columbia SWAT team was called out Saturday to the 6400 block of West Side High… 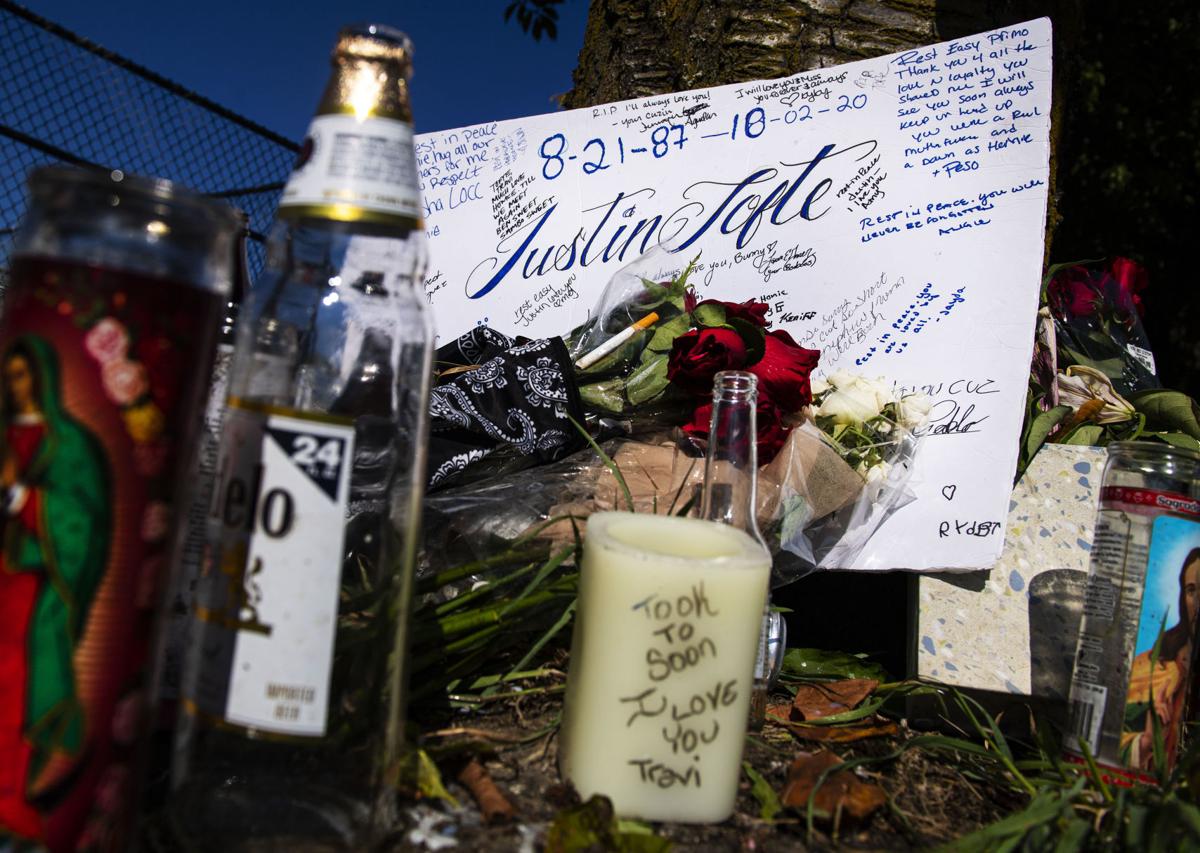 Flowers, candles and mementos surround the sidewalk memorial and site where Justin Aguilar-Tofte was shot and killed by Longview police Oct. 2 after he allegedly fled from police attempting to arrest him on a warrant. 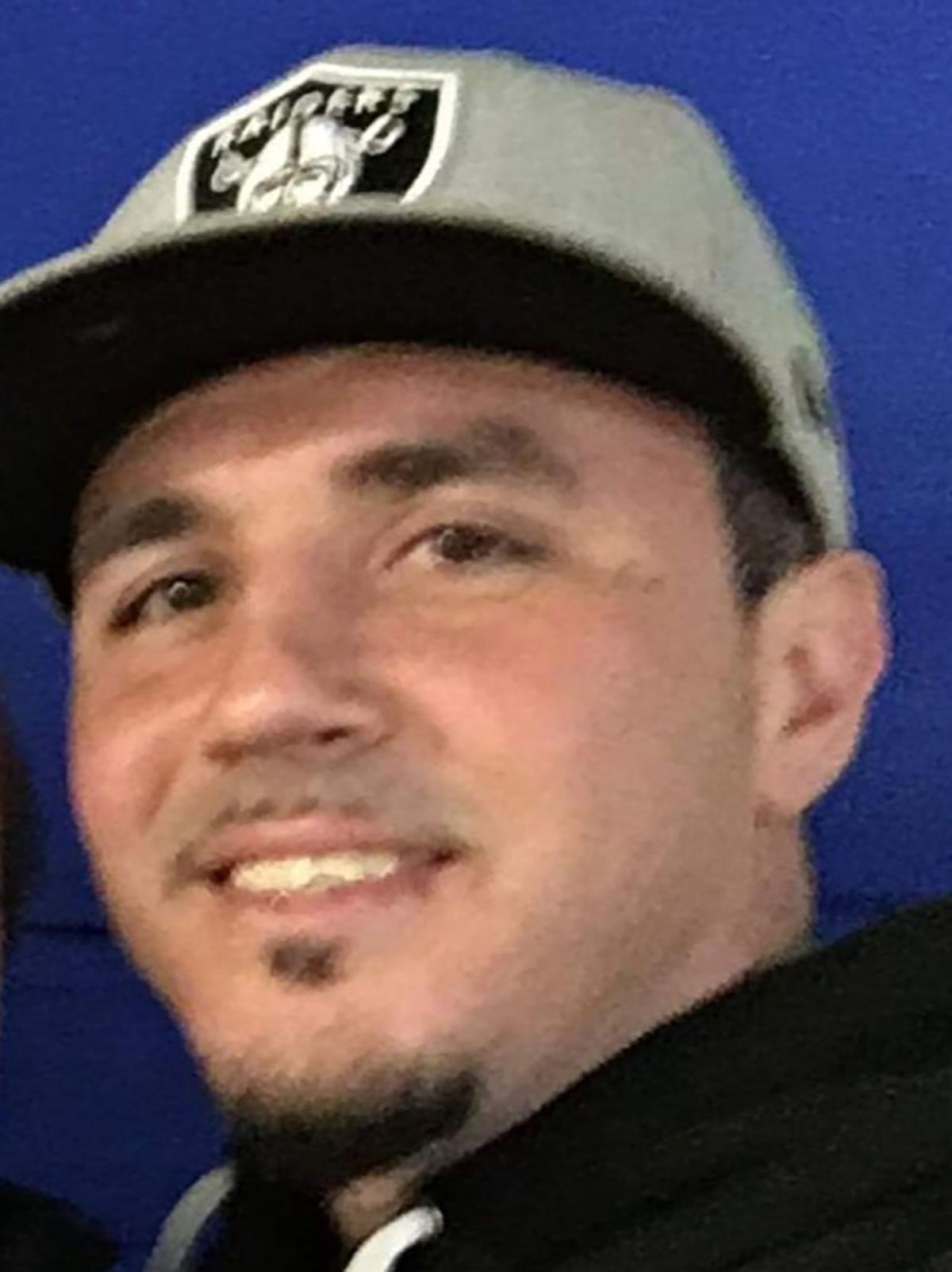 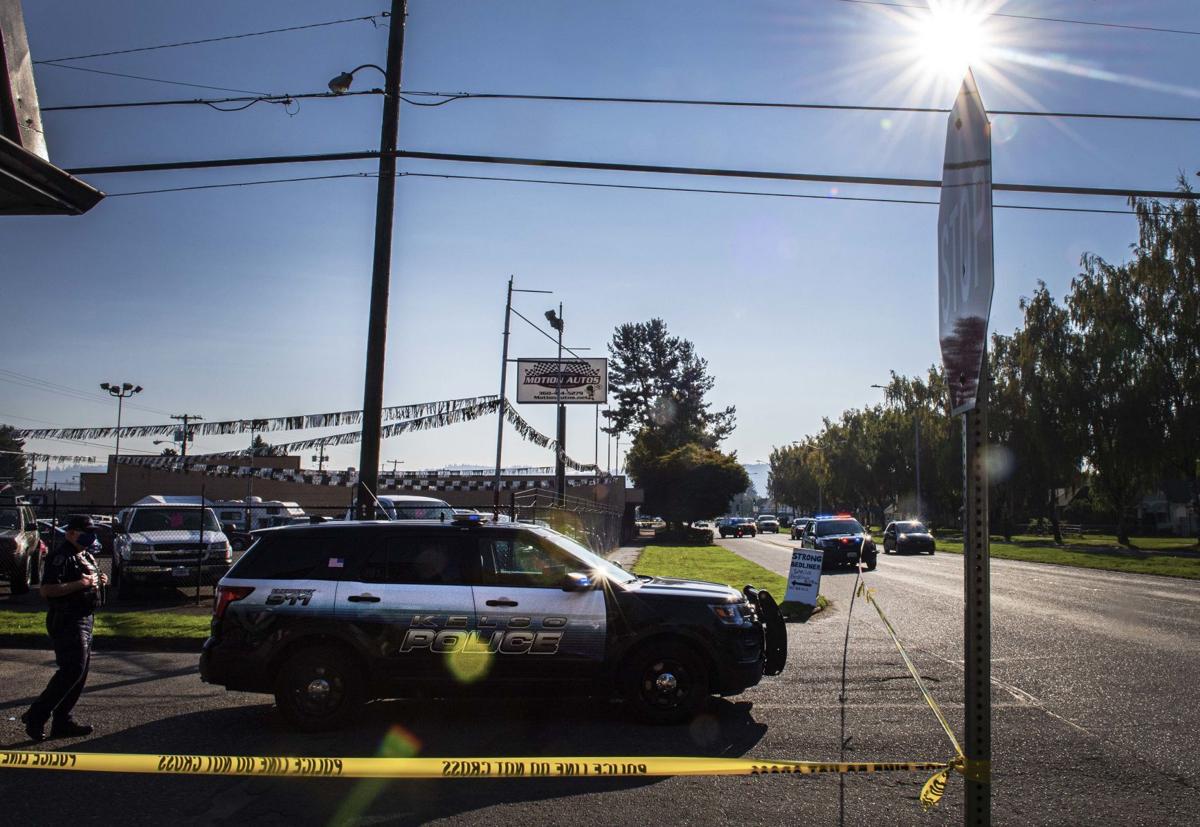 A Kelso Police officer paces a caution-taped area on Oregon Way in Longview near the scene of an officer-involved shooting Friday afternoon.