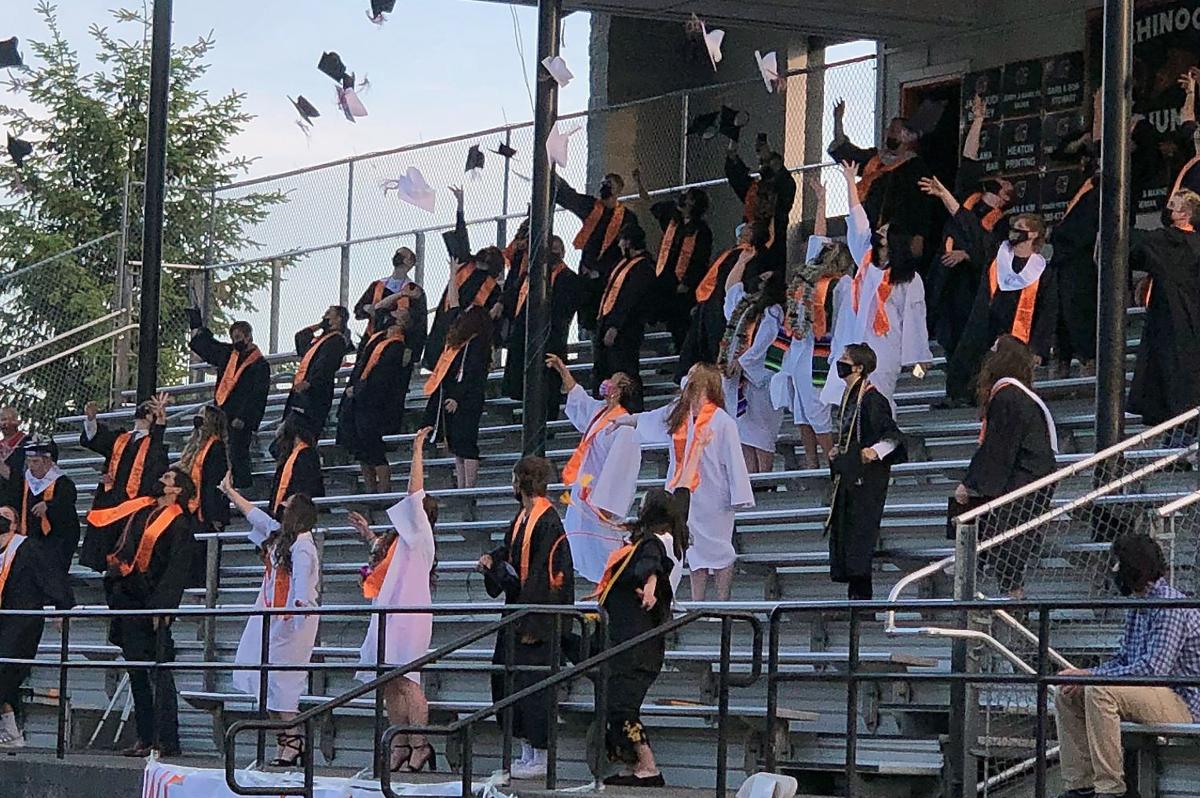 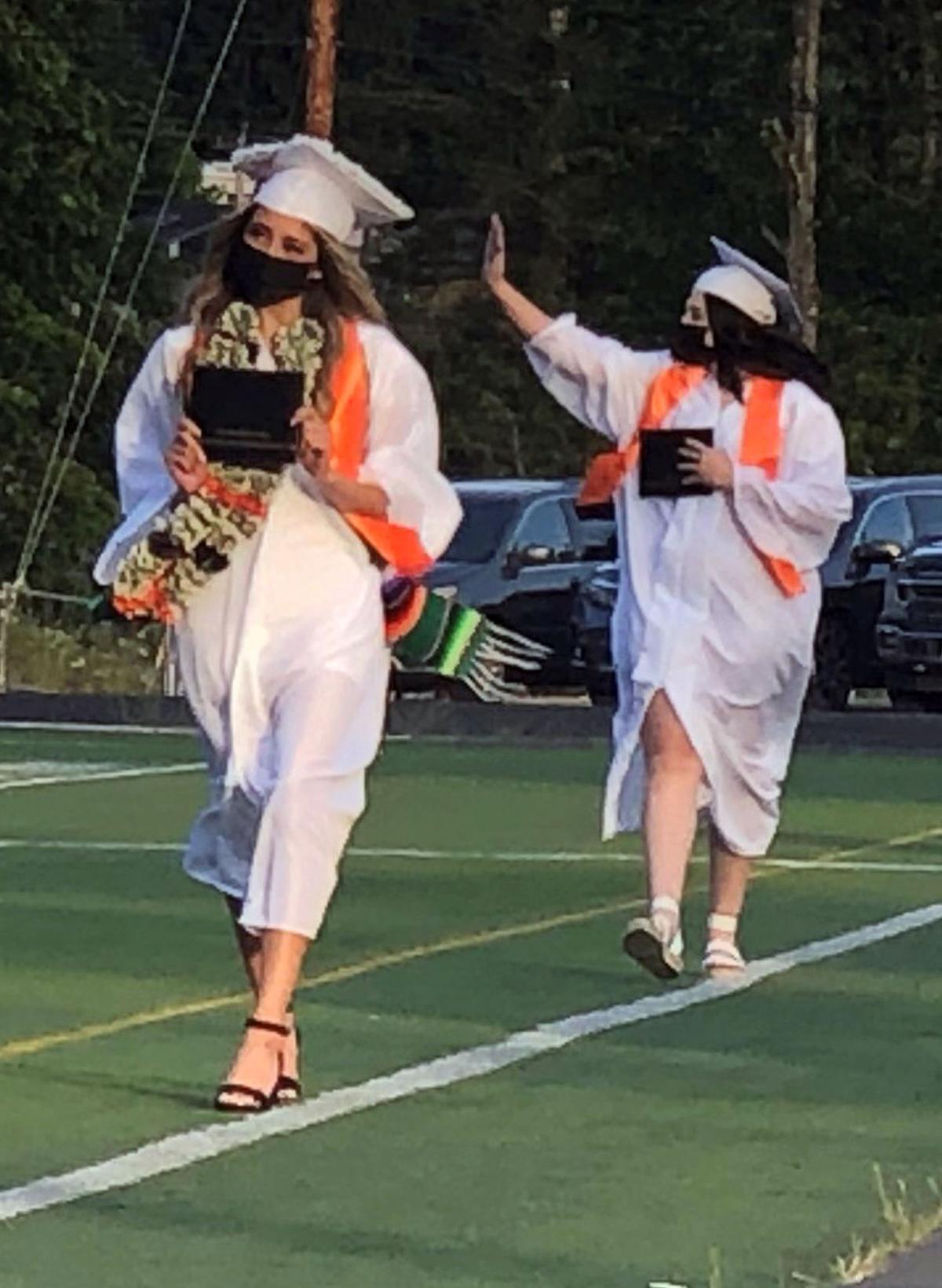 KALAMA — For many of the Kalama High school seniors graduating Friday, the ceremony marked not only the end of high school but the end of 13 years growing up together in the school district.

Student representative Maggie Cruser reflected on the big and little moments from kindergarten to senior year that will become “core memories,” including a fourth grade wax museum and seeing the football team go to state championships three years in a row.

Setbacks over the past year and a half have been frustrating, but in addressing her classmates, Cruser said attending high school during the COVID-19 pandemic was just one in a long line of memories from attending Kalama schools.

“It’s something we’ll never forget. I wouldn’t have wanted to go through it with any other group,” she said.

The class of 52 graduates received their diplomas as usual in Chinook Stadium, but the seniors sat in the stands while family and community members sat in chairs on the field to give attendees more space to spread out.

Cruser said she is grateful to graduate in person with her class after spending nearly a year apart.

“When it was in no way normal, this class was what made it worth it,” she said.

The class spent the latter part of its junior year and much of senior year attending school virtually. Kalama School District began hybrid learning in October 2020 but many older students didn’t return to the classroom until the spring.

KALAMA — Kalama High School senior Matthew Rinard pushed to get “the most he can out of everything” for himself and his class, as the pandemic…

One of the four valedictorians Addison Smee said before the ceremony he was glad the event was in-person and that seniors got to invite eight people. Graduating amid the pandemic feels “surreal,” he said.

“It feels like we skipped a year,” he said.

Graduate Josie Gallaher echoed the sentiment before the ceremony.

“It feels like we’re graduating as juniors,” she said. “The school was doing all they can to get us here. It’s a nice way to end the year.”

Gallaher said it was tough not seeing her classmates for months, but the separation prepared her for college.

“It made it exciting getting to see each other again,” she said. “It was like a reward.”

As faculty representative, Gallaher’s speech acknowledged the support the class has received from Kalama School District staff and teachers since kindergarten and throughout the pandemic.

“The past two years have put us through a lot,” Gallaher said before the ceremony. “I wanted them to feel validated as teachers, so they know they’re good teachers getting us to where we need to be.”

Gallaher, whose mom also attended Kalama schools, said most her class grew up together.

Local schools return to in-person graduation, though some traditions will wait

All districts will follow masking and social distancing requirements, school officials said, and limit the number of family members who can attend the largely outdoor events.

“I wouldn’t change it for anything,” she said. “We’re really close, like family.”

During the ceremony Principal Heidi Bunker illustrated how long many of the graduates, as well as audience members, had attended Kalama schools by asking them to stand if they had attended as kindergartners.

About half the graduating class was standing, as well as dozens of family and community members in the audience.

Kalama Elementary Assistant Principal Billina Dolezal, who taught the class of 2021 when they were in kindergarten, said they have “grown into such great human beings.”

Kalama graduates cruise into their futures with senior car parade

While many graduates will go off to college or leave Kalama for other reasons, Dolezal said she believes many will return.

“They’re going to have such an impact here because I can see them staying,” she said.

Kalama held the first graduation in Cowlitz County so far this year. Rainier High School was scheduled to hold its graduation Saturday evening at the stadium.

CATHLAMET — Graduates were showered with praise and — in some cases — sporadic downpours at outdoor ceremonies for Wahkiakum, Woodland and Cas…