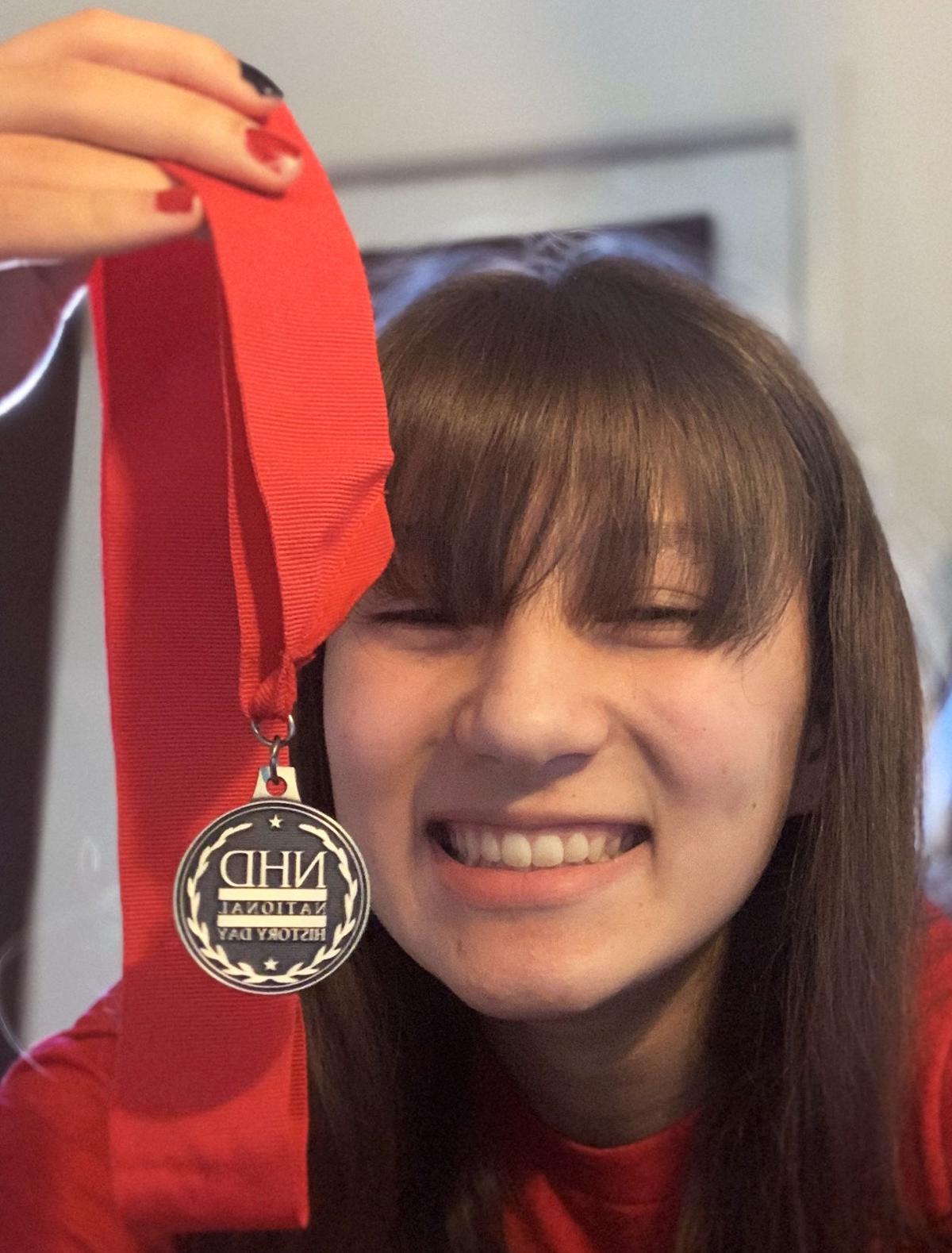 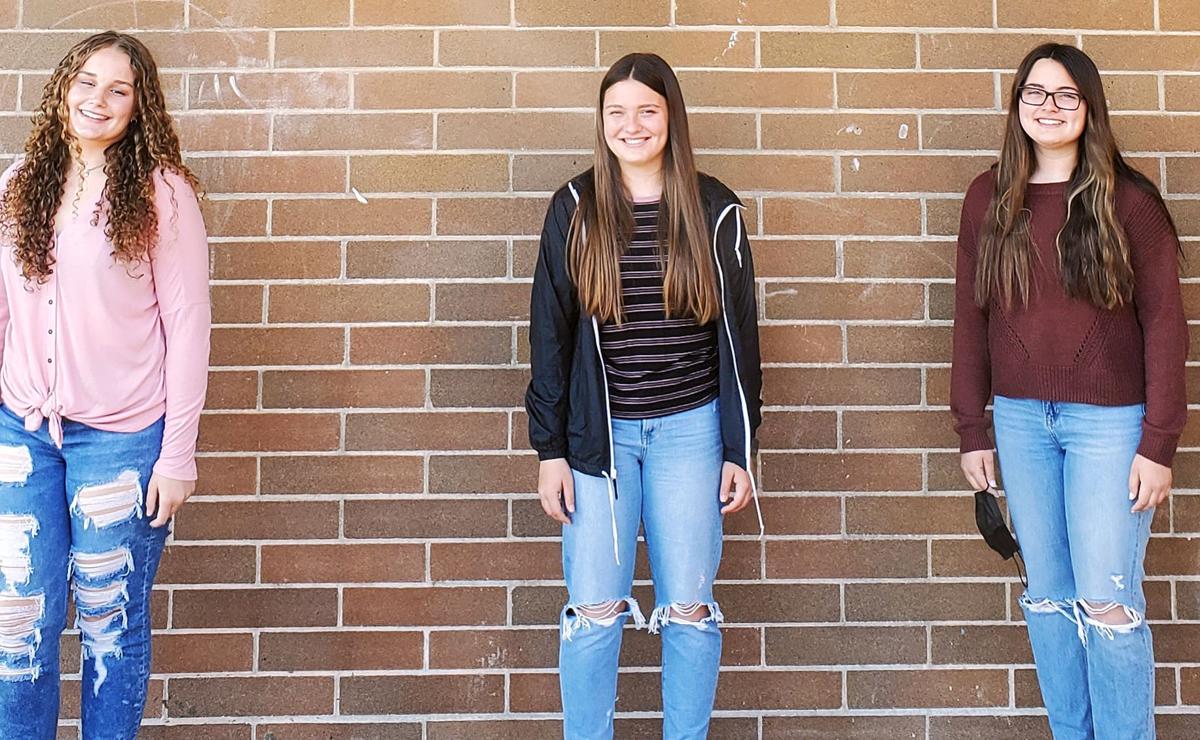 Castle Rock freshmen from left to right: Kynsi Bayes, Paige Ogden and Rylee Ogden stand outside the school after qualifying for the National History Day competition.

When his freshmen entered the National History Day competition, Castle Rock history teacher Stephen Hart knew it had been a tough year of mostly virtual school.

He hoped they would place in the regional contest, but instead, four of his students were selected to compete at the national level, blowing away all of their expectations.

“My entire neighborhood probably heard me,” Hart said of the moment they announced the winners. “I was all over the place. I hadn’t even calmed down when I heard it again — Castle Rock.”

The competition is a nationwide social studies program in which students research a historical topic related to an annual theme, then present their work in one of the competition’s five creative categories: research paper, performance, documentary, exhibit or website.

They can do so individually or as a group. This year, the theme was communication history, Hart said.

Hart’s honors world history classes worked on National History Day projects during the first semester as an extension to the curriculum, and in February, eight students representing five different projects from the school entered their projects in the Southwest Washington History Day Contest.

Castle Rock Blooms Volunteer Coordinator Nancy Chennault helped pick out the Armstrong maples before the Friday planting. They’ll turn “Castle Rock red” in the fall, she said, matching the school colors and the planters of red and white flowers students grow in the nearby greenhouses.

All of them advanced to the Washington State History Day contest, and on May 1 Paige and Rylee Odgen took first place with their website “A Whole New World: The Impact of Braille as a Means of Communication” while Kynsi Bayes and Gracie Sibbett took second place for their performance “Lucretia Mott and Elizabeth Cady Stanton’s Communication in Women’s Rights.”

All four girls were competing in sports when they got the news. Paige and Rylee were part of the way through a volleyball tournament when the texts congratulating them started pouring in.

“We were dumbfounded,” Paige said. “That’s amazing. We were working on it for so long that you’re used to critiquing it.”

Gracie said as her softball game ended, her mom started yelling that she had won, and Kynsi was putting the shot at a track meet when her coach did the same.

“The fact that wait, we actually just did that, it was so cool because I’ve never experienced going on further than the classroom completion,” Kynsi said. “I didn’t expect it.”

Hart said in a normal year, the four students would travel to the University of Maryland and Washington, D.C., to present their projects, but because of COVID-19, this year the presentations will be virtual.

“It’s an amazing experience. At my previous school, I had students go to that level,” Hart said. “I’m kind of sad that they don’t get to experience that.”

It doesn’t change how proud Hart is his students made it so far in their first year of competition, especially since they were going up against larger schools and older students.

“They did most of the work virtually, so that’s why I was so excited when they announced they had placed,” Hart said. “This year with everything we’ve had going on, it’s amazing.”

Kynsi and Gracie said their project meant a lot of time video chatting, and then getting together after sports practices when possible to “bash out a lot of it” and record.

Rylee said since she and Paige live together, coordination was less of a problem. However, since they were remote, when they ran into questions about building a website from scratch, there “wasn’t really someone right there to help us.”

Kynsi said she wanted to do a performance because she’s a better public speaker than writer, and she wanted to explore the larger impact of women’s rights on history. She picked Elizabeth Cady Stanton first, then when she asked Gracie to join her group, they added Lucretia Mott.

Paige said she and Rylee never designed a website, so it seemed like a fun choice. They wanted to bring light to an important, but often overlooked piece of communication history.

Both groups learned a lot about their subjects, and also learned important research and presentation skills. Projects require annotated bibliographies of sources, and the groups had more than 20 sources by the end.

Paige said she “thought I knew how to research, and then I started this. It’s a whole new level.”

Hart said that’s exactly why he likes to incorporate the projects into his curriculum.

“I want students to become historians,” he said. “I want them to be able to dive deep and be able to learn to cite evidence and prove their claim.”

He said learning those skills, especially as freshmen, is “transformational” and will help them later in high school and college.

The majority of Cowlitz County students will be back to school four or five days a week by end of this week.

“When I was in high school, history class was memorizing the dates and facts out of the book,” he said. “How many of us remember all that from 25 years ago? My hope is they learn skills going through this process that they can apply elsewhere.”

By diving deep into one topic, Kynsi said the project also opened her eyes to just how nuanced history is.

“Usually you have a huge variety of stuff you go over all year, so sticking with one topic and fully going into that topic is kind of cool to realize that all these other things you go over really quickly might have a really significant effect on people’s lives,” she said.

She’d like to slow down and dig in again in the future — though perhaps “not with an annotated bibliography.”

What to know about sentencing hearing for Chauvin

What to know about sentencing hearing for Chauvin

Despite community confusion over a new state law, local school districts are not teaching the controversial critical race theory to students. …

A United States Department of Agriculture program allows school districts to provide free meals to anyone from birth to age 18 for typically just the summer, but the USDA extended it to be year-round though 2022 in response to COVID-19.

Lower Columbia College’s $27 million operating budget for 2022 will allow the college to fill some positions left vacant due to COVID-19 cuts.

Interested parents should respond to the survey on the district website, so the district can hire enough staff.

As LCC's first bachelor's students near graduation, excitement for the program grows

The program started in 2019 with 24 students who were studying full time for a two-year bachelor of applied science after first completing a two-year associate’s degree program.

After teaching grades 2-12 in one room at the private school for three years, Bush was ready to return to fourth graders and came Rose Valley in 1982. She’s been there — in the very same classroom — ever since.

Castle Rock freshmen from left to right: Kynsi Bayes, Paige Ogden and Rylee Ogden stand outside the school after qualifying for the National History Day competition.