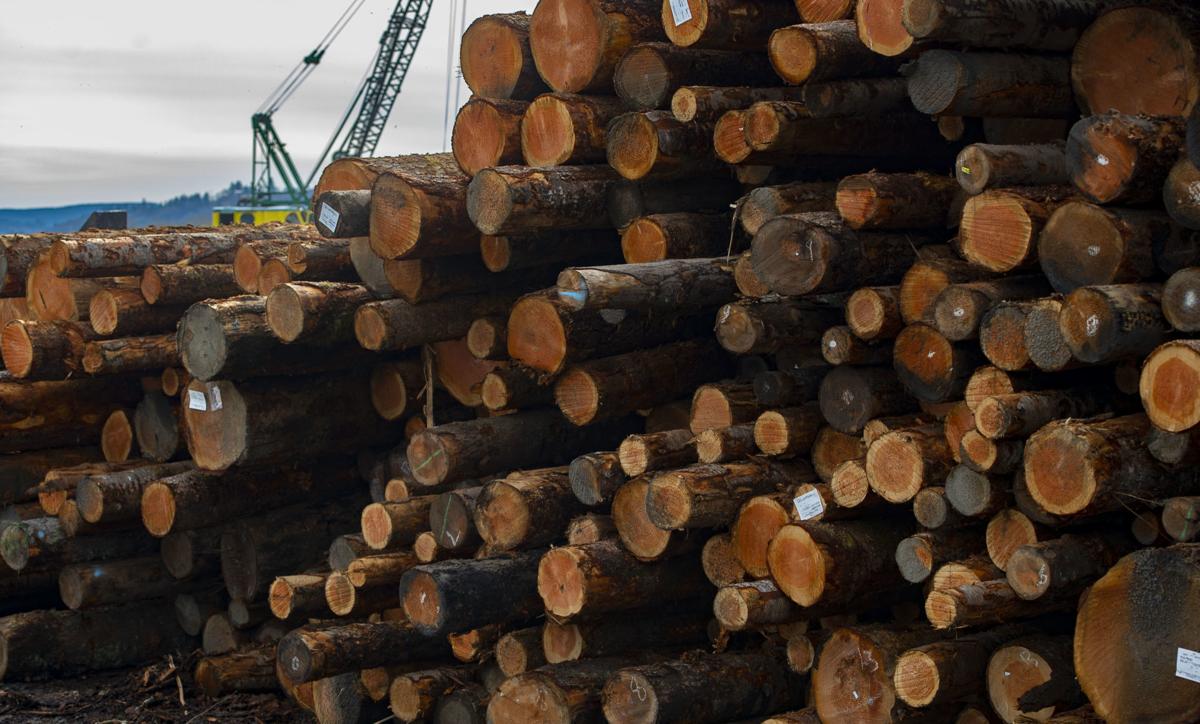 A stack of lumber at RSG Forest Products in the Port of Kalama. 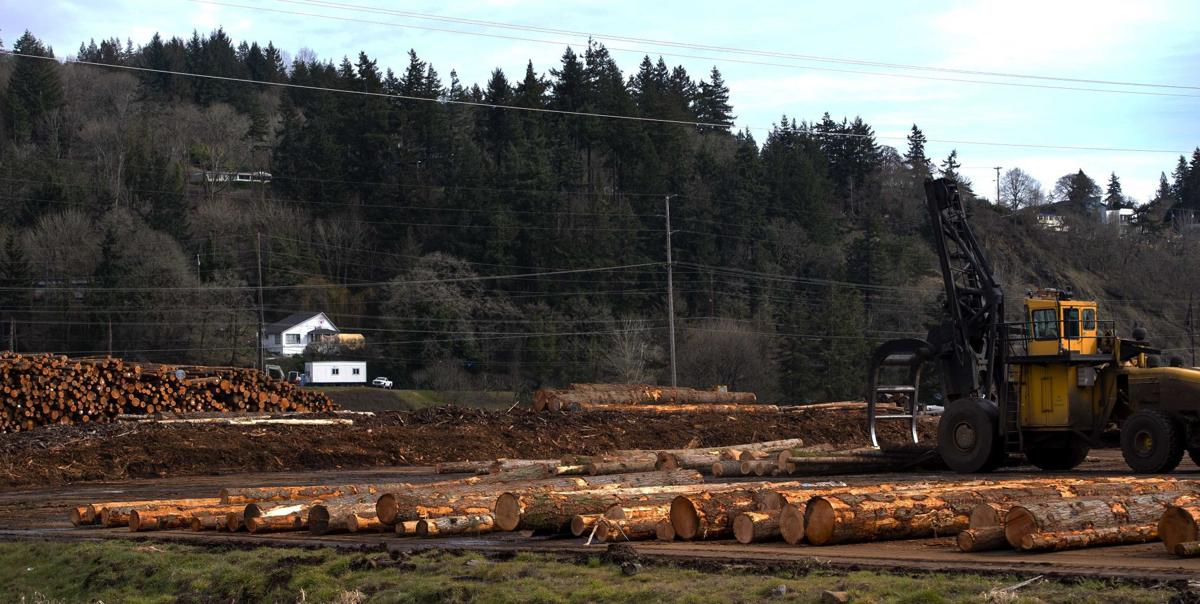 Lumber logs are moved by a tractor at RSG Forest Products in the Port of Kalama.

Lumber prices have plummeted over the past 10 months, casting an uncertain pall on a sector that’s been a harbinger of economic downturn in the past. It’s worrying news for Cowlitz County, home to more forest product jobs than any other county in the state.

After peaking at $582 per 1,000 board feet last May, the price of Douglas fir is down to $390 this month, according to Nasdaq commodities data, and experts are unsure of what to expect next.

“We’ll see some slowness this year, maybe continuing into 2020, but then long-term the potential is still there for growth,” forecasts Daniel Stuber, vice president of operations at Forest2Market, which reports on the industry. But that growth is far from certain.

Prices reached record highs last year and the drop could be a rebound back to normal, Stuber said. But global tariffs are slowing lumber exports, and investments in the southern U.S. could make Pacific Northwest lumber less competitive. And there are troubling hints of slowing housing construction, with housing starts and building permits both lower this year than in 2018.

If construction continues to stall, the 12,300 Cowlitz County residents whose jobs are tied to logging and wood products processing could be the first to feel an economic slowdown that has the potential to reach far beyond local sawmills.

That’s what happened 12 years ago, when the price of wood was one of the first hints that a major recession was on the way, said Cindy Mitchell, public affairs director for the Washington Forest Protection Association.

“Back in 2007, log prices dropped really quickly,” Mitchell said. The subprime loans that would be blamed for fueling the Great Recession were still readily available, and public data did not yet hint of the coming economic chill. But builders and lenders were growing wary about the future, and as they hesitated log and lumber prices fell.

Mitchell does not think the current slump marks a repeat of last decade’s economic collapse, but, like Stuber, she is keeping a close watch on housing starts.

“People who are building multi-family housing are on the forefront of what is happening with log and lumber prices,” Mitchell said. “And everything is connected.”

Brian Hatfield, who previously represented Cowlitz County as a state senator and now serves as Forest Products Sector lead for Gov. Jay Inslee, said he remains optimistic. Prices are down compared to last year – but they still are higher than the average over the past few years. After all, lumber prices were at all-time-highs last May.

“We may just be seeing a correction from the mid-2018 historical spike in lumber prices,” Hatfield told The Daily News in an email.

As the experts look at the future of lumber pricing, they seem to agree that Chinese tariffs and California wildfires have had little impact so far.

The forests hardest hit by last year’s fires were largely U.S. government owned and off-limits to logging because of environmental protections, according to Forest2Market. Though more than 11,000 homes were destroyed in the deadly Camp Fire conflagration, that’s a small blip nationally. If all the houses destroyed were replaced, they’d comprise less than 1 percent of the 1.5 million housing units U.S. builders are on track to complete this year.

China instituted a 10 percent tariff on U.S. lumber last year, and raised that to as high as 25 percent at the start of 2019. But mills largely took the export tax in stride.

Washington state, which ranks No. 2 in the U.S. for lumber production, has not been hard hit by the tariffs, Mitchell said. “Our producers are primarily making lumber for housing in the United States,” she said.

Less than 1 percent of U.S. lumber is exported to China, Stuber said. “It would be ignorant to think these tariffs are not having any effect,” he said. “But it’s not much.”

And companies that do export lumber, including Weyerhaeuser Co., have already bounced back from China’s tariffs. In a call with investors in February, Weyco President and CEO Devin W. Stockfish said revenue from exports to China is steady over the past year. “Demand has been steady since the tariffs were imposed,” he said.

More significant than China’s tariffs on U.S. lumber may be American tariffs on Canadian wood, he said.

“They are primarily looking in the U.S. South, where a lot of Canadians are investing in new saw mills and saw mill technology,” he said. “The South has low log costs compared to the Pacific Northwest, so they are not investing in your region.”

Weyerhaeuser, which owns forestland both in Canada and across the U.S., has made similar calculations. CEO Stockfish told investors last month that the company expects to primarily expand wood processing in the South. “With the South, log costs are lower than they are in the West and in Canada,” he said.

As those new high-tech southern saw mills start to come online, that could make it harder for Washington’s mills to compete, Stuber said.

“Log costs are 50 percent to 70 percent of a mill’s costs, and the U.S. South has lower log costs than the Pacific Northwest,” he said. “If we go into an economic slowdown and lumber prices stay low, that’s a problem for your region. It could translate to fewer jobs out there.”

But that’s far from certain, Stuber added — and if Northwest log prices drop, the trend could reverse.

“We at Forest2Market are predicting that we’ll see 2019 down compared to last year,” he said. “But the long-term fundamentals are still there to see growth in the market over the next five years.”

A stack of lumber at RSG Forest Products in the Port of Kalama.

Lumber logs are moved by a tractor at RSG Forest Products in the Port of Kalama.