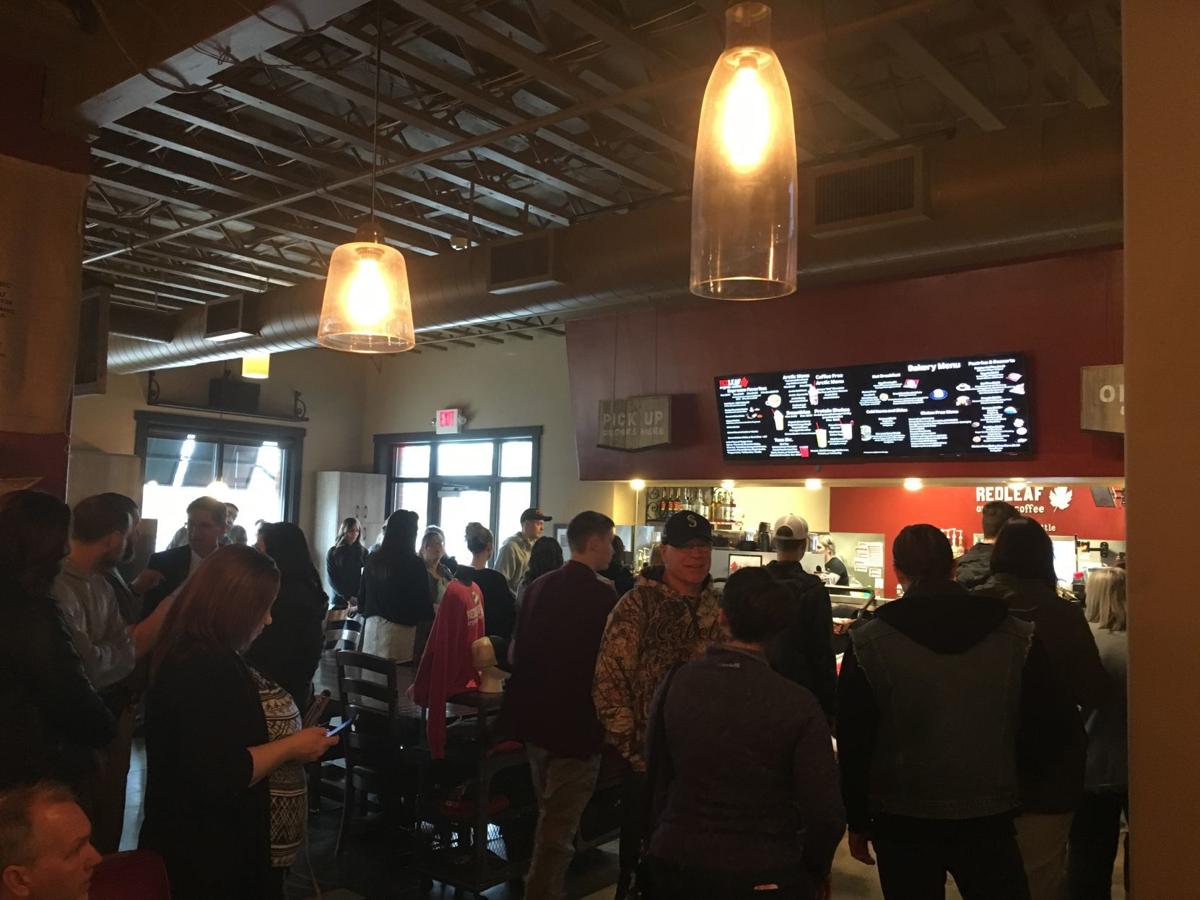 Customers line up in the Red Leaf coffee shop near the Allen Street Bridge in Kelso Wednesday morning. The business is donating a portion of sales to the family of Cowlitz Sheriff's Deputy Justin DeRosier, who died in the line of duty Saturday. 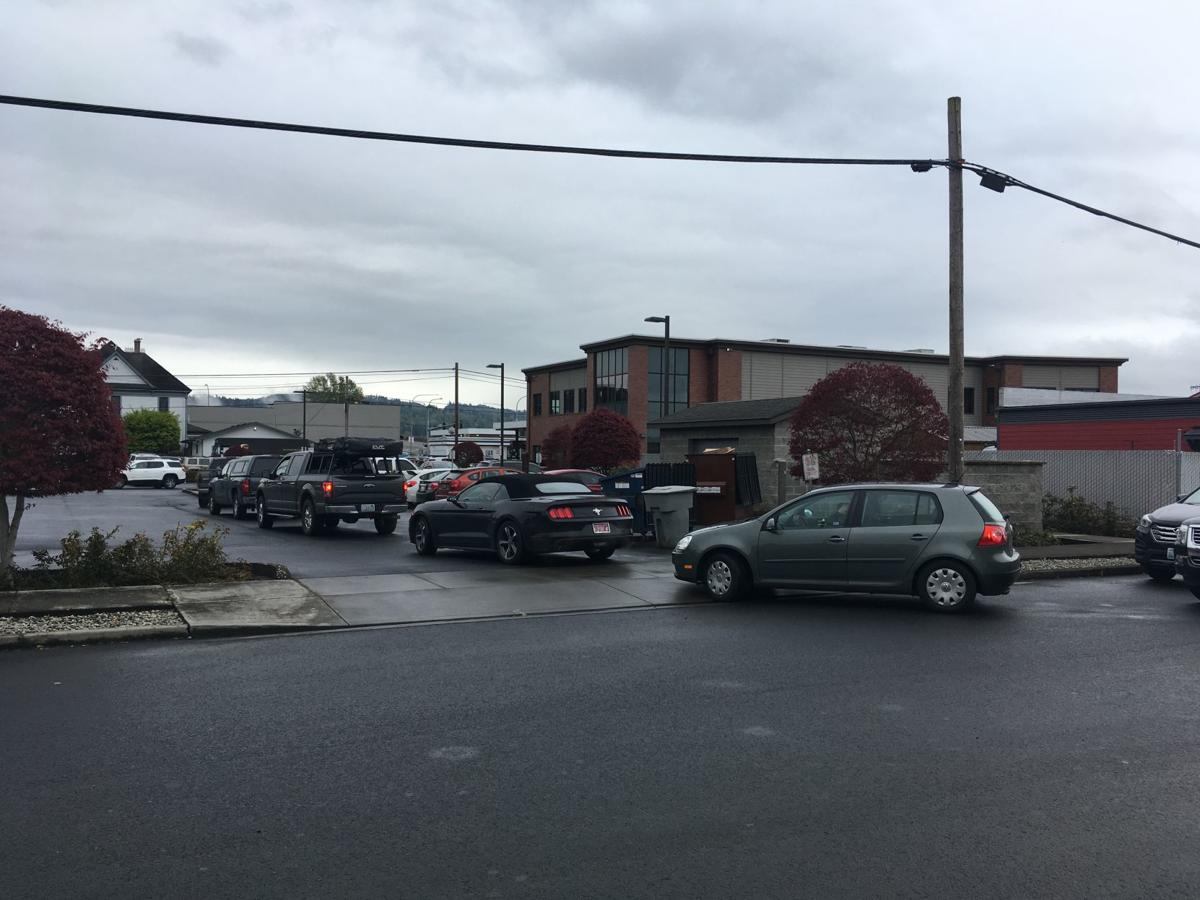 Cars lined up around the block at the Kelso Red Leaf coffee shop drive-through Wednesday to support the DeRosier family.

In an outpouring of support for the family of slain Cowlitz County sheriff’s deputy Justin DeRosier, local coffee chains Dutch Bros and Red Leaf were flooded with customers Wednesday morning for a fundraiser.

And the Kelso City Council dedicated most of its Tuesday night meeting to the slain officer.

The coffee shops said they would donate 20 percent of all Wednesday sales to the family. The line for the Kelso Red Leaf drive-through wrapped around both sides of the block shortly after the shop opened at 5 a.m. until well into the afternoon, Director of Stores Jodi Snedden told The Daily News.

Between 5 a.m. and 6 a.m., the location had 100 more customers than on a typical day, she said. And by 2 p.m., they had served more customers than they typically serve in an entire day — more than 1,000. The store is also collecting donations, but a current count was not available.

“I’ve been amazed. I’m so excited to see our community pull together like this. We did not expect this response,” Snedden said.

She said they had to have an emergency milk run to keep up with demand and extra orders from the local Red Leaf bakery. By 3 p.m., the Kelso location was down to its last muffin. But all the customers have been friendly and positive, she said.

“It’s a terrible tragedy, but it’s great to see our community come together,” said Red Leaf customer Marc Silva of Kelso. “I knew everyone would come out to support. ... Everyone loves coffee in the Northwest, and something like this definitely brings everyone together and gives us a reason to go buy some coffee this morning.”

Many local business participated in fundraising efforts for the family this week. Copies Today in Kelso had given out nearly 10,000 “Back the Blue” stickers Tuesday to honor DeRosier.

The sheriff’s office Wednesday opened an official Deputy Justin DeRosier Memorial Fund through U.S. Bank in order to protect the DeRosier family from unintended tax liability. That fund will be used to help cover memorial expenses, and any leftover money will go to the family directly, according to a sheriff’s office press release.

Ridgefield resident Samantha Brown, whose husband is a Multnomah County sheriff’s deputy, said seeing the support from the community made her feel emotional.

“I always loved Red Leaf, so coming back here for this excuse is easy. It hits close to home. So of course I’m willing to come out here and support in any way I can,” she said.

Woodland resident Reggie Sheppard said he often spends part of his Wednesday at Red Leaf during a break from being a bus monitor for students with special needs. But he specifically visited the coffee shop this time to show support for the DeRosier family.

“I’ve known officers slain in the line of duty, so it touches me deeply,” he said. “There’s been times when I was in difficult situations where you can relate. And you know what the families go through. You know what the fellow officers go through and what the community goes through. I love to see their support. I think it’s just wonderful. As much as we can do to try to assist the family, it’s just about the best you can do. You try to do the best you can.”

In another sign of community outreach for the fallen deputy, the Clean Machine auto detailing shop in Longview is detailing DeRosier’s patrol car. The vehicle will be driven during the funeral procession some time next week and then returned to service, said Cowlitz County Sheriff Brad Thurman. (DeRosier was in a loaner vehicle the night he died because his regular patrol car — the one undergoing detailing — was in the shop for repairs.)

The Kelso City Council on Tuesday cleared much of its agenda to honor DeRosier, 29, a lifelong Kelso resident who was killed in the line of duty on Saturday night.

“The outpouring of support from the law enforcement community has been overwhelming. Officers from all over are trying to give us attention, soothe our wounds and help us in our time of need,” Kelso Police Chief Andy Hamilton told the council.

Members of the City Council struggled for composure as they thanked local law enforcement.

“One of the reasons I wanted to be on the council is because I believe in Kelso,” Councilwoman Kimberly Lefebvre said. “This tragedy showed me that I really can believe in Kelso. Our community has come together way more than I really thought they would.”

Councilman Mike Karnofski said he has been impressed with the officers and deputies with whom he has gone on ride-alongs in the past.

“I’m always amazed at the courage it takes to answer a call on a dark night, going down a dead-end road,” he said. “I respect them. I honor them. I salute them, and I thank them for the service they provide us to give us a safe community.”

DeRosier was fatally shot while checking out reports of a disabled motorhome that was blocking Fallert Road, which is three miles east of Interstate 5 at the north end of Kalama.

He was taken by a LifeFlight helicopter to PeaceHealth Medical Center in Vancouver but died a short time after he arrived. He leaves a wife, Katie DeRosier, and a five-month old daughter, Lily, his first child.

The shooting is the first line-of-duty death in Cowlitz County Sheriff’s Office history, which stretches back to the mid-19th century.

Many Kelso officers worked around the clock this weekend to help in the investigation and with the 22-hour manhunt for the suspect, Chief Hamilton said. In particular, Captain Darr Kirk worked for 36 hours as part of the command staff, Hamilton said.

“Mostly what we need is for people to recognize that burnout is what’s going to change our culture,” Tate said. “We can only ask so much of (officers), for so many hours a day, for so many days in a row before it wears on them.”

Hamilton said the law enforcement community is arranging a memorial service. It has not been scheduled yet but will likely occur some time next week, he said.

“Justin DeRosier took the path that led to a life of commitment and honorable service,” Hill said. “His life path was far too short, and for that we feel profound sadness. We feel his loss. But his choice to follow that path will be forever inspirational in our community. … Those who choose the life path of wearing the badge are truly the best among us. For them, I say and I think we all say, ‘Thank you.’ ”

Here is a list of services, memorials and fundraisers in the works to honor Deputy Justin DeRosier and help his family:

• Memorial service at 1 p.m. Wednesday at the University of Portland's Earle A. & Virginia H. Chiles Center, located at 5000 North Willamette Boulevard. A live video feed of the service will be shown at  New Life Church, 2441 42nd Ave. in Longview.

• The Cowlitz County Chaplaincy will lead a prayer at the new gazebo at the Longview Civic Circle starting at 6:30 p.m. Friday.

Customers line up in the Red Leaf coffee shop near the Allen Street Bridge in Kelso Wednesday morning. The business is donating a portion of sales to the family of Cowlitz Sheriff's Deputy Justin DeRosier, who died in the line of duty Saturday.

Cars lined up around the block at the Kelso Red Leaf coffee shop drive-through Wednesday to support the DeRosier family.