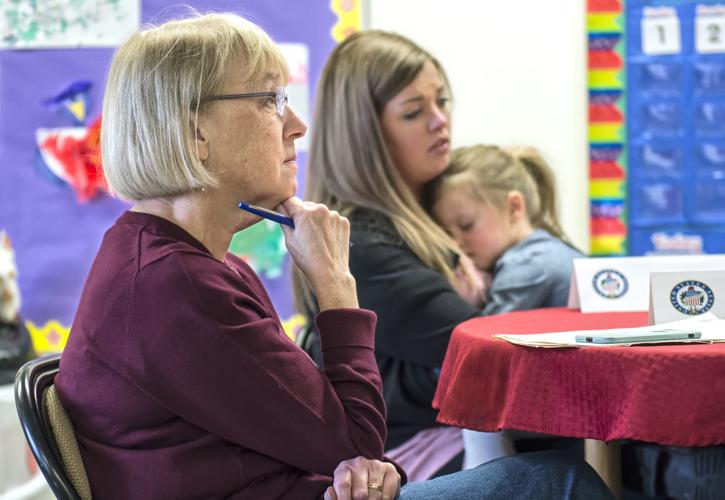 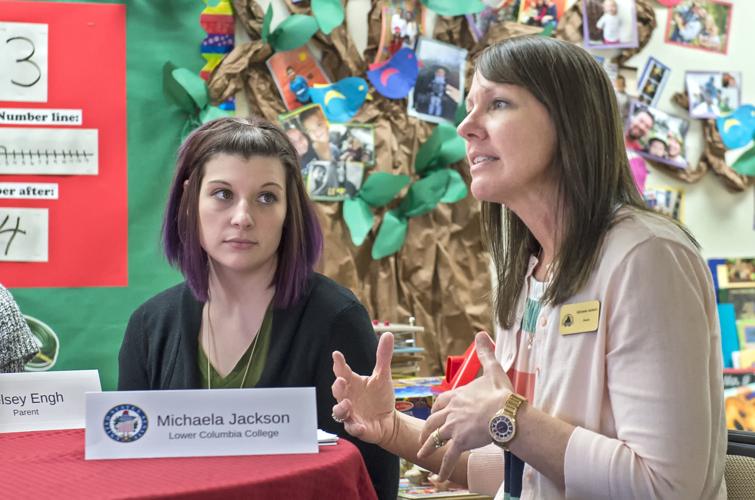 Michaela Jackson, right, describes the frustrations of training people to work in early childhood learning, only to watch them exit the field due to low pay. Mother Kelsey Engh listens.

After receiving a promotion last fall, Alexis Doble was excited to make more money. But then the 25-year-old Kelso resident realized what the shift to full-time work would do to her child-care costs.

The change cut into her state child-care subsidies, and the cost of care for her 4-year-old daughter, Trinity, leapt from $15 per month to $375 per month. Meanwhile, Doble also lost $350 per month in food stamp assistance.

“The $700 that I was excited about taking home and saving was completely wiped away,” the single mother said Tuesday. “By working full-time and being away from my daughter more, I’m in exactly the same spot that I was before.”

Doble shared her story Tuesday with U.S. Sen. Patty Murray, the top ranking Democrat on the Senate Health and Education Committee. Murray was in town to tour LCC’s Early Learning Center and promote a bill that would help working families struggling in the midst of a national child care crisis.

“I hear about the issue of the child-care crisis everywhere I go, but I particularly wanted to highlight a more rural community because people often think it’s not a problem there,” Murray, a former preschool teacher, said in an interview following her tour. “But it’s a huge problem.”

The number of licensed childcare centers in Cowlitz County dropped from 67 to 47 over the past five years, according to Child Care Aware, a nationwide referral service.

Jackson said she fields between 10 and 15 calls per week from working parents who are desperate to find a day care center for their children.

“It’s heartbreaking because they say things like, ‘I’ll do anything,’ “ she said.

Jackson said some parents will show up at the center with their children in tow, wiping tears from their eyes.

While the center is licensed to serve 86 children, it currently has 150 families on a two-year waiting list.

“It makes you think that the problem with the economy is just going to get worse,” Jackson said. “How are people supposed to work? And when they do, they lose money.”

Students who work as assistants at the Early Learning Center make $11.50 — minimum wage in Washington. Assistants with two-year early childhood degrees make $13.50 per hour, while the center’s six unionized classroom teachers start at $16.81 per hour.

But Jackson said that most local child care workers earn minimum wage and do not receive health care benefits or paid vacation.

Child care workers also are struggling to cope with a recent sharp increase in students with severe behavioral problems, she said. Her own facility has seen an eight-fold increase in such children, she said.

“This is a respectable career, but if you’re paying that kind of money then there’s no way you’re going to retain staff,” Jackson said.

Most of the center’s employees leave for higher-paid K-12 jobs with benefits as soon as they earn their bachelor’s degrees, she said.

Even if the center added extra classrooms, it would be nearly impossible to find qualified staff to help fill them, she said.

Full-time infant care at the Early Learning Center — which is pegged to what other local certified day care centers charge — costs about $1,000 a month. That’s about 20 percent of the median household monthly income in Cowlitz County.

Care for children between 12 and 29 months costs about $900 per month, and the center’s preschool program is close to $800 per month.

For many working families, child care often costs more than rent or a mortgage.

At those rates, the average local cost of full-time care for children ages 0-4 is higher than the average cost of in-state college tuition.

“The problem is most of our parents have more than one child,” Jackson said. “We see parents who kind of get desperate and then they’re leaving them with neighbors or whoever they can find. That’s not always the best case scenario for kids.”

The effects of low-quality child care are real: In Longview and Kelso, only 26 percent of children were considered ready for kindergarten last year, according to a 2017 state study.

Meanwhile, the state Office of the Superintendent of Public Instruction wants 90 percent of all children in Washington ready for kindergarten by next year.

First introduced last September, Murray’s bill — called the Childcare for Working Families Act — would address the crisis on multiple fronts. The bill has 28 Democratic co-sponsors in the Senate, and another 118 Democrats have signed on to a companion bill in the House.

According to Murray’s office, the bill would:

The bill’s price tag is $60 billion per year. Murray acknowledged that cost is one of the main critiques of her proposal.

Murray said she’s willing to work with Republican colleagues to find a way to pay for the package, noting that the GOP-passed tax plan is expected to cost $1.5 trillion over 10 years.

“I’m willing to look at just about anything,” she said. “There are a lot of pay-fors out there. We just passed a huge tax cut that gave away a lot to the wealthiest, and I think they can pay a little bit back to help us out.”

The Daily News Week in Review highlights notable stories the newspaper covered the past week.

A 51-year-old Longview man has been identified as the body found July 30 in Kelso.

Republican Joe Kent took a 960-vote lead over Rep. Jaime Herrera Beutler in ballot returns on Monday, placing him in a likelier spot to advanc…

SKAMOKAWA — As of Monday afternoon, search teams had not found two swimmers who went missing Saturday from Vista Park west of Cathlamet, accor…

CHEHALIS — When his family, community, teammates and even players from rival sports teams think of Miguel A. Soto, they think of his beaming s…

Michaela Jackson, right, describes the frustrations of training people to work in early childhood learning, only to watch them exit the field due to low pay. Mother Kelsey Engh listens.