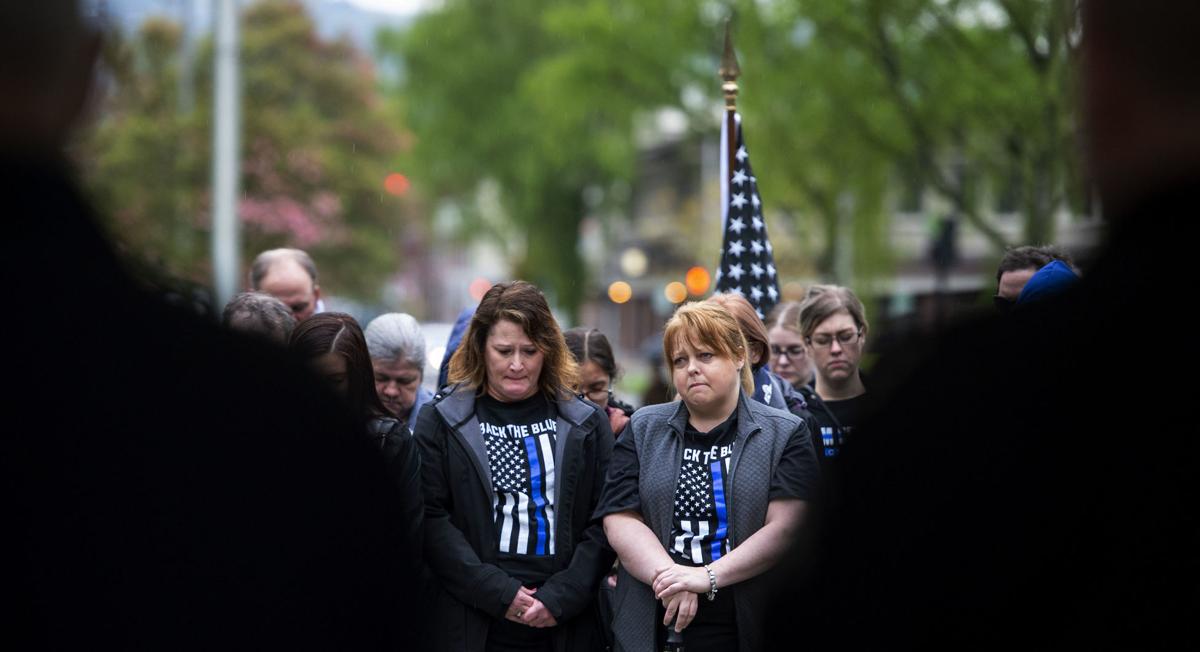 Attendees of the Back the Blue event honoring slain Cowlitz County sheriff’s deputy Justin DeRosier hold back tears as the crowd bows their heads for a prayer April 19, 2019, at R.A. Long Park in Longview. 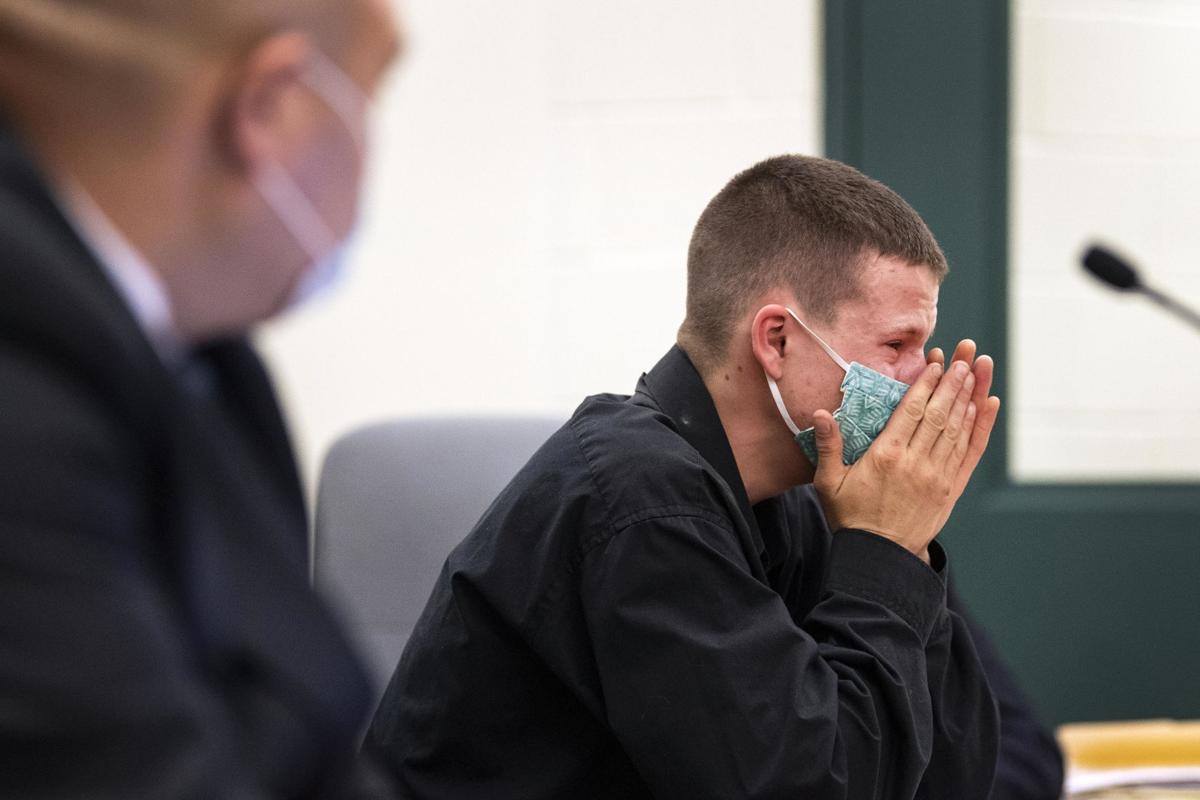 Matthew Veatch cries into his hands after being sentenced to 11 months in jail June 8 for assisting in the escape of Brian Butts, who shot and killed Cowlitz County Sheriff's Deputy Justin DeRosier on April 13, 2019, in Kalama. 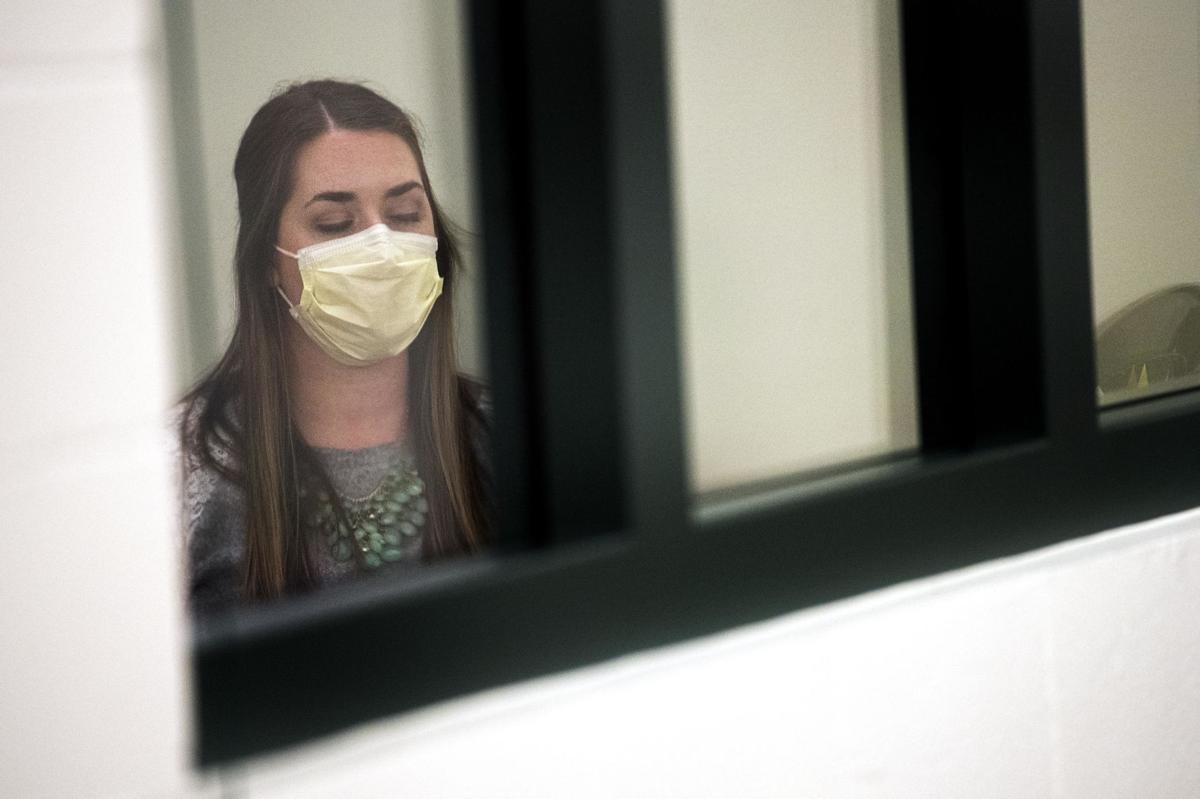 Law enforcement and emergency services members across Cowlitz County flashed their emergency lights simultaneously Tuesday night to memorialize one of their own who was shot and killed in the line of duty.

Wednesday marked the two-year anniversary of Deputy Justin DeRosier’s death, and two court cases stemming from the night he was shot still are working their way though the court system.

While the ongoing pandemic made a memorial event difficult, law enforcement members gathered in a long line Tuesday evening outside the Cowlitz County Hall of Justice, flashing their emergency lights and taking a moment of silence.

DeRosier, 29, is remembered as a loyal and courageous lawman. He was shot around 10 p.m. April 13, 2019, while responding to a call about an improperly parked motorhome in Kalama. He died from his wounds early the next day.

“Our thoughts will be with his family at this time,” Sheriff Brad Thurman said. “Justin is missed daily and his service and sacrifice will never be forgotten.”

The Sheriff’s office released a video tribute to DeRosier on its Facebook page, Chief Criminal Deputy Troy Brightbill said. The department also shared a tribute video to mark the one-year anniversary in 2020, as gatherings were curtailed due to the COVID-19 pandemic.

DeRosier was a 2008 Kelso High School graduate. He had been a deputy for the Cowlitz County Sheriff’s Office since 2016. He also was a 2012 criminal justice graduate from Washington State University.

The shooting is the first in-line-of-duty death in the agency’s history, which stretches back to the middle of the 19th century.

DeRosier’s name will be added to the National Law Enforcement Officers Memorial in Washington, D.C. Local law enforcement plan to visit the memorial when it is safe to do so.

The community also has rallied around DeRosier’s family, holding fundraisers to support his young daughter and his widow, Katie DeRosier.

PHOTOS: Community gathers to 'Back the Blue' in honor of DeRosier family

Three people have been convicted for offering criminal assistance to Butts after he shot DeRosier and fled.

In June 2020, Matthew Veatch of Kalama was sentenced to 11 months in jail for aiding in Butts’ escape.

Veatch, then 26, led Butts through the woods after Butts showed up at the Veatch household where Veatch hid a gun for Butts in his gun safe.

After several jury trials and hearings were postponed due to COVID-19, Eastman pleaded guilty at the end of 2020. Her sentencing hearing is scheduled for May 4.

Investigators believe Michael Veatch called Eastman, his girlfriend at the time, who in turn called Ricky Roberts to arrange a getaway ride for Butts shortly after DeRosier was shot.

Roberts pleaded guilty to third-degree rendering of criminal assistance. According to investigators, Eastman called Roberts for the getaway car.

On the morning of April 14, Woodland police officers located a vehicle parked at the end of China Garden Road occupied solely by Roberts, according to police records. It was parked near a set of communication towers with bright flashing lights about two miles south of the DeRosier shooting location on Fallert Road. Detectives suspect he was part of a plan to use the towers as a beacon for Butts to find while tromping through the woods at night.

Roberts will be sentenced June 24.

What comes next in NY's investigation of Trump

Attendees of the Back the Blue event honoring slain Cowlitz County sheriff’s deputy Justin DeRosier hold back tears as the crowd bows their heads for a prayer April 19, 2019, at R.A. Long Park in Longview.

Matthew Veatch cries into his hands after being sentenced to 11 months in jail June 8 for assisting in the escape of Brian Butts, who shot and killed Cowlitz County Sheriff's Deputy Justin DeRosier on April 13, 2019, in Kalama.