Monday Night Football: Scores and updates from Steelers vs. Colts

The building that houses services like case management for minors in the Cowlitz County Juvenile Court system is displaying youth artwork and local historical pieces to turn a regulated center into a more open space.

As of Thursday, the building’s previous stark, white walls are lined with three pieces made by minors involved with the center, as well as roughly 18 historical photos, flags and banners from the 1800s to the 1920s on loan from the Cowlitz County Historical Museum.

“People think of us as punitive, but really we’re trying to help youth with any struggle they might be going through,” he said.

Contact the Cowlitz County Historical Museum to inquire about how to borrow museum pieces for public display.

The Cowlitz County Youth Service Center houses juvenile court, probation offices and a detention center for youth under age 18 who are convicted of crimes. The artwork is only housed in the office building that offers services like case management.

According to a state report, 544 youth were admitted to the detention facility in 2019. When comparing the overall population, for every 1,000 minors between the age of 10 and 17 in Cowlitz County in 2019, almost 20 would have been admitted to the juvenile detention center that year, reports the state.

According to the county’s Juvenile Court website, convicted youth are held accountable through restorative justice — an approach to repair harm by connecting with the community where crimes occurred.

Moya said the center has featured a wall of artwork created by youth through community service or therapy projects since last year. One piece features a minor’s timeline, including struggles that landed him in the system to accomplishments like purchasing his first vehicle. Another piece lists behavioral reminders like “Never make a reply when you are angry” atop multicolored shapes.

Studies show creating art can rectify emotional and academic difficulties. A 35-year-old art therapy program at the Cedars-Sinai medical center in Los Angeles reports 74% of the program’s students showed higher self esteem and 89% showed behavioral improvement after working on art.

Viewing the facility’s displayed artwork also creates more interactions and discussions, Moya said. Families guess the locations of the loaned photos, some nearly as large as the walls and spanning roughly 4 feet. The center plans to make the pieces more interactive by adding three example captions below each display to allow visitors to guess the correct label, Moya said.

Cowlitz County Historical Museum Director Joseph Govednik said the loaned items — including a purple and yellow flag that honors U.S. women’s suffrage in 1919, as well as a photo of children standing on the steps of a Lewis River school in the early 1900s — would sit in storage without the option to hang inside the county building.

Govednik said he would like to share more stored items with local facilities. He said some loaned pieces from the museum’s 2013 law enforcement exhibit have been displayed at the Hall of Justice in Kelso for at least three years.

“My dream is to have more pieces out there in the public,” Govednik said, “to give old exhibits new life in other places.”

Families of minors convicted of serious offenses will no longer have to pay the state for housing and treating their incarcerated children. 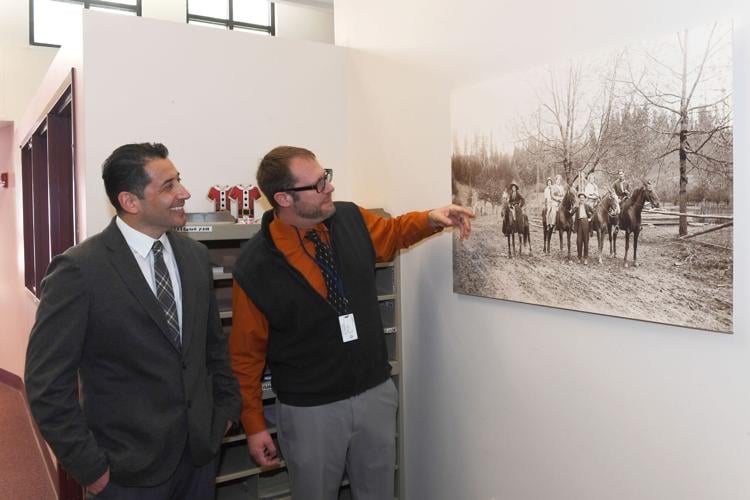 Cowlitz County Court Services Manager George Moya and Cowlitz County Historical Museum Director Joseph Govednik on Thursday show off a historic photograph displayed in the Youth Services Center in Longview. The center partnered with the museum to display loaned pieces of art for kids to interact with and enjoy. 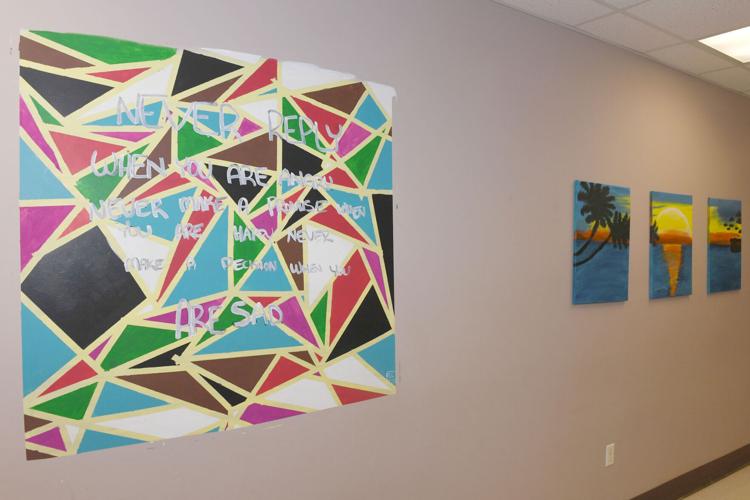 A piece of art made by a juvenile who receives services at the Youth Services Center is displayed in the center's hallways on Thursday in Longview. Along with historical pieces, the center welcomes kids to create art to be displayed in the building.