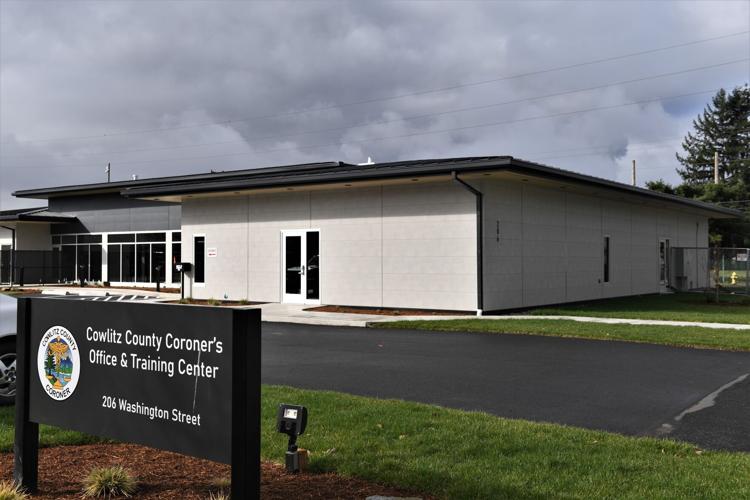 The new Cowlitz County morgue, located on the corner of Washington Street and Third Avenue,  is several times the size of the old facility. 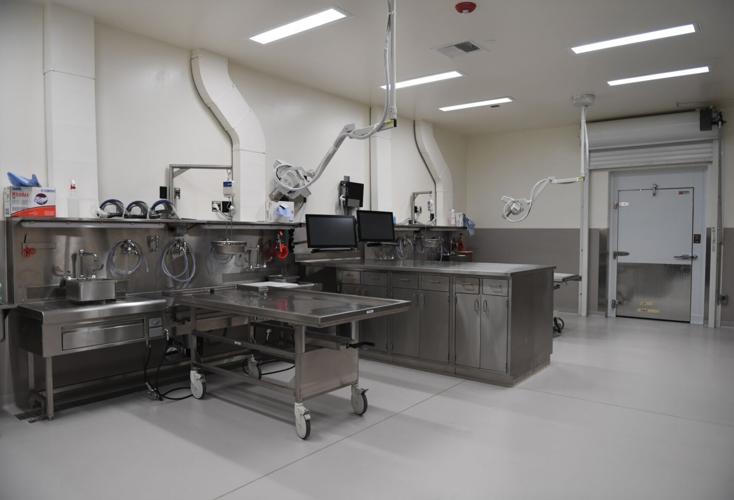 Since moving into the new Cowlitz County morgue, Coroner Tim Davidson no longer has to shut down the office during autopsies.

Smells and sounds from the examination room leaked into the lobby because the old building, a remodeled garage, was cramped and had poor ventilation.

After about 15 years of planning and delays the coroner’s office moved into the new $5 million morgue late last year.

“It’s like a relief to come to work,” Davidson said.

The new facility provides a much-needed separation of the public areas from the unpleasantries of the morgue and the capacity to handle the increasing number of cases. The former 945-square-foot morgue was about the size of the garage in the new 8,600-square-foot building, Davidson said.

The new building includes a garage, lobby, three offices, a break room, a cooler and a freezer, two autopsy rooms and an evidence room. A room adjoining the lobby provides a place for staff to talk with families, rather than meeting in the parking lot, Davidson said.

“Being able to come in and sit down and have face to face communication is huge,” he said.

The coroner’s office moved into the old building, the county’s first morgue, in 1998 after area funeral homes decided to stop providing free space to store bodies and perform autopsies, according to a previously published Daily News story.

By 2007, the morgue had outgrown the building, exceeding its storage capacity on any given weekend, Davidson said at the time. The county completed a blueprint for a new morgue that year, but the recession delayed plans for about a decade.

Planning began again in 2017, but hit a snag in 2018 when staff discovered a problem with the plans and the county lost the architectural firm working on the project. In 2019, the commissioners approved a contract to redraft the plans, which were approved in early 2020. Construction began in February 2021.

The coroner’s office moved into the new building in October, but work continued for the next couple months, including demolishing the old morgue for the parking lot, Davidson said.

The new morgue provides needed capacity to handle rising cases and room to grow or to handle a large-scale disaster.

The coroner’s office determines the cause, manner and mechanism of sudden, unexplained or natural deaths, identifies deceased people and notifies their next-of-kin.

Cowlitz County has seen an increase in cases investigated by the coroner’s office since the early 2000s, Davidson said. Drug use, the growing population and aging baby boomers have contributed to the rise, he said.

Last year, the coroner’s office investigated more than 1,100 cases, up from about 800 in 2020, Davidson said. Some of those were COVID-19 related but the majority of virus deaths happened in the hospital and don’t count as a coroner case, he said.

After operating at or near capacity for more than 10 years, a surge of COVID-19 deaths last fall pushed the morgue over the edge.

The county commissioners in early September approved purchasing a refrigerated trailer and a related emergency declaration after a spike in deaths overwhelmed morgue and funeral home capacity.

The old morgue could hold 12 bodies, and the trailer brought capacity up to about 28 total. The new building has cooler space for 44, freezer space for 12, plus the trailer for about 75 total, Davidson said.

A door connects the autopsy room and the cooler, when before bodies had to be wheeled through the lobby to move from the cooler to the examination room.

The new examination room has space to hold multiple autopsies at once, rather than one at a time. Down the hall is a sterilized isolation room for bodies with communicable diseases.

In the hallway, large windows show into the examining rooms and a monitor hooked up to cameras gives law enforcement or prosecutors a closer look without having to watch over the forensic pathologist’s shoulder, Davidson said.

“The law enforcement that’s been in here so far on cases love it,” he said. “They like the ability for the observation hall, and before the cameras (were) in, the larger rooms allow everybody to do their jobs much easier.”

The upgrade included a portable X-ray machine, easing and speeding up the process that previously required a trip to PeaceHealth St. John Medical Center, Davidson said.

The new technology incorporated throughout the morgue makes the work more “comprehensive,” allowing the office to better serve the community, he said.

A break room, offices and staff desks facing large widows also are significant improvements. Deputy Coroner Brett Dundas said he worked in the old building for 17 years without a window and has enjoyed the new setup.

“My staff and I want to thank the community and the commissioners for getting this up and running,” Davidson said.

The Cowlitz County Coroner’s Office has a new volunteer team member — a cadaver dog to help find missing people or their bodies.

The Cowlitz County coroner running for re-election on Nov. 8 has not been charged with fraud following a 2019 investigation, during which his …

The new Cowlitz County morgue, located on the corner of Washington Street and Third Avenue,  is several times the size of the old facility. 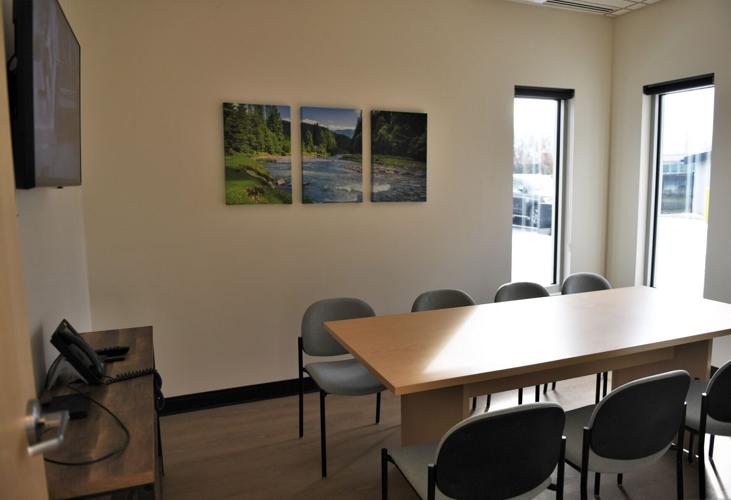 The family room in the new Cowlitz County morgue provides a dedicated space for the coroner to talk to family members of the dead.