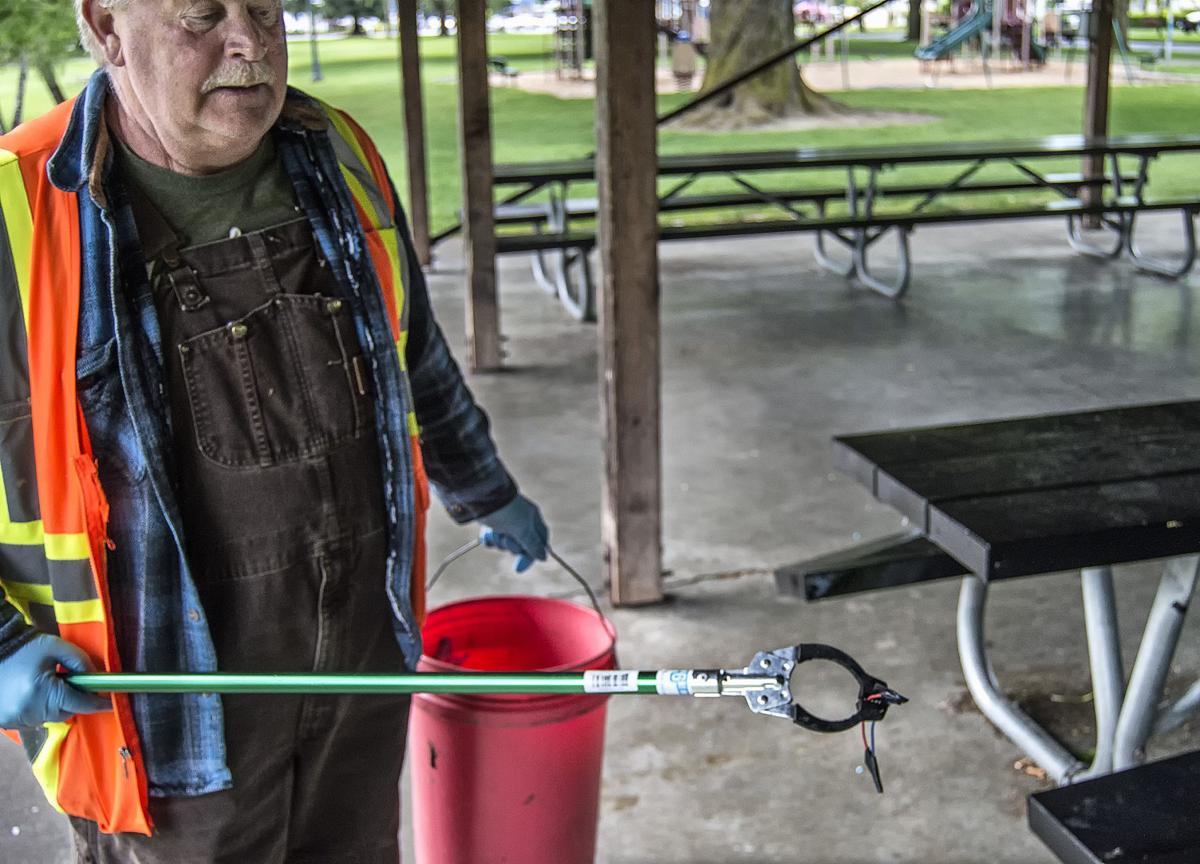 City of Longview employee Ron Pedersen picks up trash and refuse left behind by drug users at Lake Sacajawea, including some small pieces of insulation stripped of the copper wiring it held. 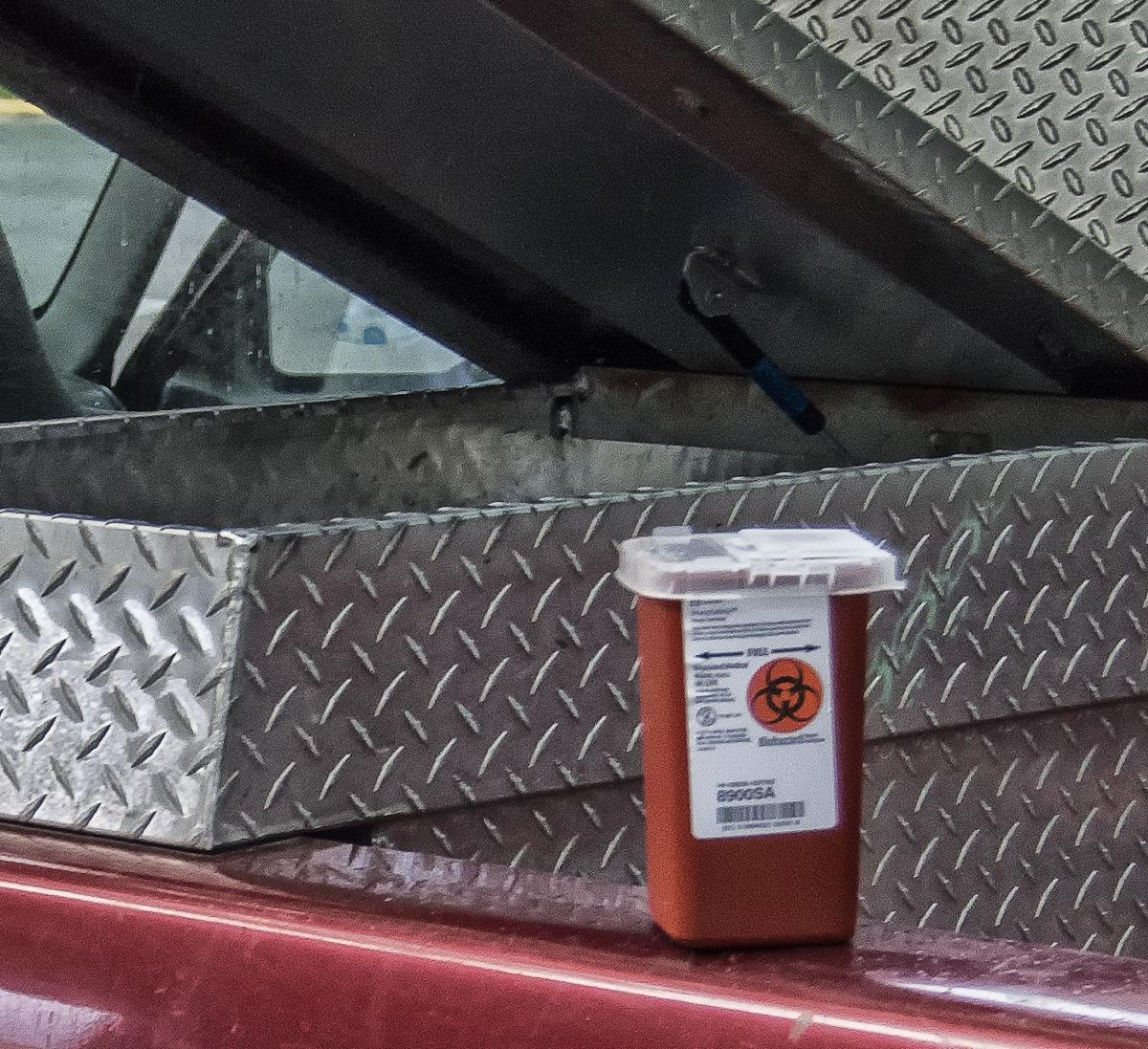 Longview parks maintenance workers carry sharps containers with them to store needles and other potentially dangerous drug paraphernalia they may find.

The cover of night lifted to reveal a chilly spring morning tarnished with trash.

“I took 30 big bags of garbage from the lake Monday,” Ron Pedersen said on a Tuesday in May as he started his Longview parks maintenance shift. “Today will be much less.”

But it wasn’t nothing. A regular passerby pedaling through the rain waved hello to Pedersen as he finished cleaning the Lake Sacajawea bathrooms nearest 15th Avenue and Nichols Boulevard.

“Don’t stick yourself,” said the friend, echoing what many parents might have to tell their children if not for the city spending resources cleaning up after careless drug users.

At least in this case, the needles were buried in putrid trash clogging a toilet, not hiding in a bush or baseball field dugout.

“We just can’t keep up with it all,” Pedersen said.

Though Pedersen’s time spent plucking needles is just a fraction of the costs of fighting drugs in the community, it nonetheless adds to at least $20 million in drug-related costs shouldered by Cowlitz County taxpayers every year. And that’s just for local law and justice costs.

“If you take people in jail for possession of drugs, for doing something stupid while on drugs or for stealing something to get drugs, it’s probably 85 percent of the people in there,” Cowlitz County Superior Court Judge Stephen Warning said. “It is the root cause of the vast bulk of the crime that we deal with.”

And that crime adds up fast.

Taking 85 percent of the cost of running the county jail, in conjunction with a more conservative 40 percent of other law enforcement and justice system budgets at the city and county level, leads to the $20 million number.

That’s a low estimate, considering all of the crimes fueled by drug use or dependence.

“With most types of calls for service involving property crimes, drugs could be an underlying factor or presence with any of the individuals involved,” Longview police Capt. Robert Huhta said.

Given the area’s high property crime rate, drug use could push the taxpayer burden as high as $30 million per year — well more than drug users pay for their fix.

“The amount of money illicit drug use costs taxpayers ... far exceeds the amount users spent on illicit drugs,” according to the federal Office of National Drug Control Policy.

The taxpayer cost of the “war on drugs” has long been tied largely to law enforcement spending, sentencing guidelines and the like.

Judge Warning said that for a long time, that has meant “tough on crime” policies and laws that lock up addicts as opposed to treating addiction.

“We (the courts) are the end of the pipeline; we’re the most expensive part of the pipeline. Anything you do with someone at this point, this is where you spend the most money,” Warning said. “If you address drug issues before you ever get to court, you’re spending much less money to do so.”

Just in Longview, the city budgeted nearly $19 million for public safety for 2015, more than half of the city’s general fund.

That means half of every dollar of property, sales and business and occupation taxes goes to police and fire services.

And while that’s typical for cities with any kind of crime problem (it’s the same rate in Seattle), street repairs continue to fall behind, and the city will be dipping into its reserves to balance its budget for years to come.

The drug war represents this bevy of lost opportunities — where else could that $20 million be spent?

“The law enforcement focus could shift more to issues surrounding domestic violence, neighborhood disputes, traffic enforcement, etc.,” Longview Police Capt. Robert Huhta said. “Drugs are not the only reason people are committing crimes, but I believe the amount of crime would be greatly reduced if there were not any drugs in the world.”

That could in turn free up all that money from the justice system for parks, roads and other city and county goals.

With that high estimate of $30 million, for example, Longview could return its tap water source to the Cowlitz River with barely a dent to water rates.

Should the drug problem disappear, Longview City Manager Dave Campbell said law enforcement would still be a high priority, but other city goals would have a fighting chance.

“Based on my perception of current Council priorities, however, probably the bulk of that drug-fighting money would be redirected to street maintenance, repairs and improvements as well as projects designed to enhance Longview’s economy,” Campbell said.

A drug-free Cowlitz County would lower homelessness too, as a full quarter of the homeless population is substance-dependent, according to the National Coalition for the Homeless.

The group said that homelessness can lead to drug use or vice versa.

“Since substance abuse is both a cause and a result of homelessness, both issues need to be addressed simultaneously,” according to a 2009 Coalition report.

That would reduce the strain on social services — such as the unpopular Love Overwhelming shelter, which received a $575,000 county grant earlier this year.

But before dreaming of ways to better use the money spent fighting drugs, the battle has to be won.

“One thing proven beyond shadow of a doubt is that locking addicts up doesn’t magically make them not addicts,” Warning said. “Most of society has gotten away from the tough on crime and gotten to ‘smart on crime.’ “

But it has only come so far, he added.

“Because the state does such a poor job addressing people with mental health needs, we (in the court system) end up addressing those needs,” Warning said.

Which, again, is costing taxpayers at least $20 million per year.

“The drug problem is an issue of supply and demand,” Huhta said. “Law enforcement as a whole has concentrated their efforts on the supply issue. However, as a community, we need to seriously examine why there is such a high demand for illegal substances.”

Ron Pedersen finds at least one or two needles a week when cleaning up Longview’s parks, but also heaps of trash leftover by uncaring users.

“I don’t know what people think,” he said.

Pedersen, 60, is a lifelong Longview resident and said he doesn’t know what, if anything, can be done about the problem. He just continued to pick up after it as the sun burned away the morning clouds.

There is always the question — is what we’re doing now working?

“We need to focus on the reasons why people start and continue using drugs,” Huhta said. “We need to provide resources and alternative, healthy ways to cope with life’s ups and downs that does not include substance abuse.”

This is the second installment of our six-part series on the costs of illegal drugs in our community. Each story will look at different aspects of society the drug problem touches, with an emphasis on quantifying the problem.

Searching for the fix: Solutions to Cowlitz County's drug problem

Jane loves her family and wants to find a good job to support them.

Price of addiction: Like many others, Thomas Vickers's drug use has cost taxpayers plenty

Thomas Vickers started using marijuana when he was 15. And over the next three decades, he always seemed to get hooked on something — meth, co…

City of Longview employee Ron Pedersen picks up trash and refuse left behind by drug users at Lake Sacajawea, including some small pieces of insulation stripped of the copper wiring it held.

Longview parks maintenance workers carry sharps containers with them to store needles and other potentially dangerous drug paraphernalia they may find.