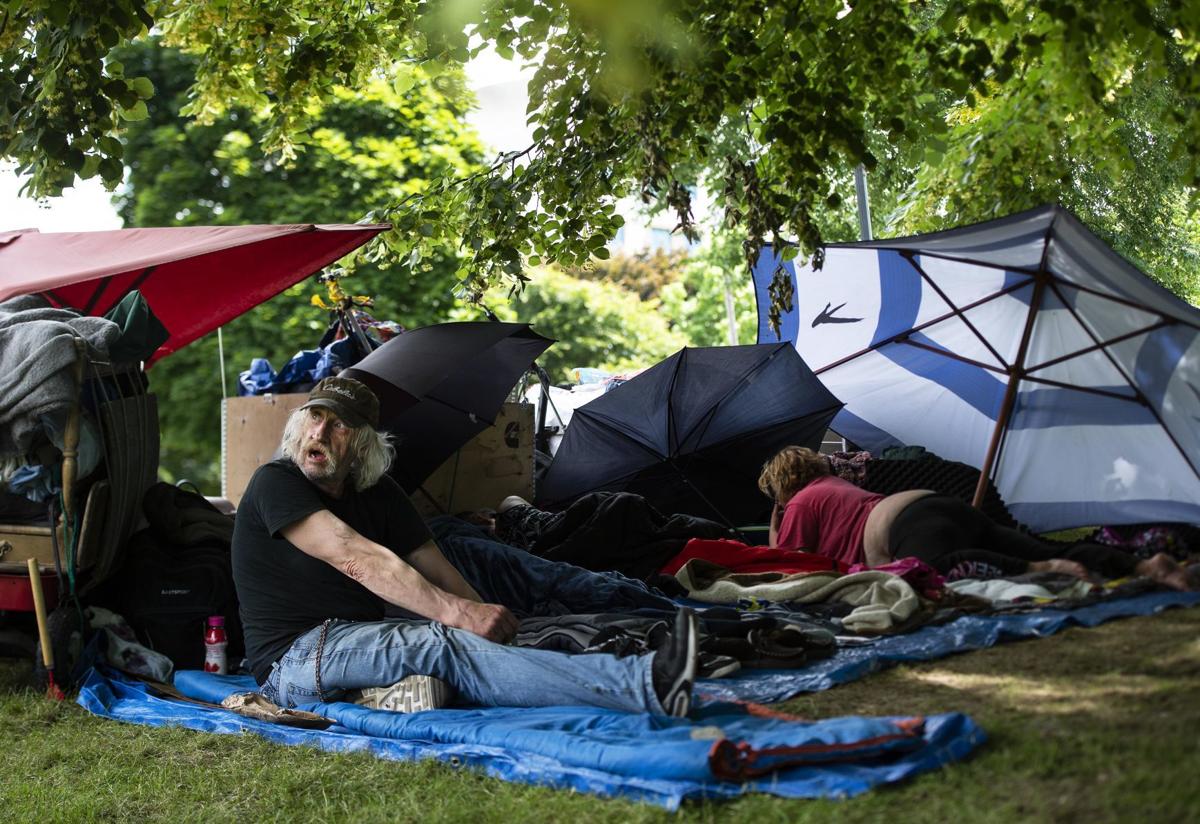 A group of homeless individuals resting in the shade at Lake Sacajawea try to recall if they were included in the annual Point in Time count conducted in January.

The number of sheltered and unsheltered homeless people reported in Cowlitz County's 2019 annual Point in Time Count is the highest in the last 10 years, according to the state Department of Commerce data.

The state originally reported 468 total homeless; a state Department of Commerce error added 62 people to that count. The correct number is 406, so the total number of homeless increased by 20% in the last year.

The number of homeless people in Cowlitz County soared 38 percent in the last year, according to the annual Point in Time Count results recently released by the state.

Local social-service providers said the increase doesn’t surprise them and attribute the gain to the lack of affordable housing.

This year’s Point in Time Count reported 468 sheltered and unsheltered homeless people in the county, up from the past four years’ average of 340 people. Last year’s count was 338.

State law requires each county to conduct an annual homeless count. This year’s count took place on Jan. 24. Counties must complete the count to receive funding from the U.S. Department of Housing and Urban Development and the state Department of Commerce.

The results break down those in abandoned buildings, cars, camps and some motor homes.

Cowlitz County’s numbers include those counted at Project Homeless Connect held by the county Health and Human Services Department and data from the Department of Commerce.

Cowlitz County’s tight rental market makes it difficult for people to find a place to rent, and many current renters are staying put for longer because new rentals or homes for sale are limited, Taylor said.

“We saw four more people in the last week and a half that lost housing after their rent got increased by over $200,” he said. “It’s a big thing we’re seeing every day.”

Frank Morrison, Community House on Broadway executive director, said the shelter’s numbers have risen in the last couple years. In 2018, an average 106 people stayed in the shelter each night; so far this year that has increased to 120, he said.

The shelter increased its capacity by adding bunk beds, which contributed to that increase, Morrison said. But families are also staying longer than they used to, he said.

The Point in Time Count results are not an exact representation of the homeless people in the county but allow local, state and federal departments to track trends and identify what type of assistance an area needs.

Two homeless men at Lake Sacajawea on Wednesday said they didn’t know about the survey and don’t think they were counted. Four others across the lake said they attended the Project Homeless Connect event in January and were counted at the door.

Morrison said the increase in the count comes in part from police breaking up camps and pushing those people into town where they are more visible.

The Point in Time Count doesn’t include those who are couch surfing or staying with friends and family. If it did, the numbers would be “huge,” Taylor said.

Many of CAP’s clients are people who have lost housing but are not on the street, Taylor said.

One example she gave was of an elderly CAP client who used his Social Security check to pay for a hotel for most of the month. He ended up on the street when the money ran out. Another was a single mom with cancer and young children who can’t afford an apartment, so they’re couch-surfing.

“A ton of people are in that situation, and not just in Cowlitz County,” Taylor said.

This story has been updated with new information.

The Longview man who swam across the Columbia River on Sunday in Kalama says he finished the 2,500-foot crossing without trouble. But he warne…

Lexington yard sales are a hit

Ripped jeans. Paintings. Toy guitars. Antique jars. From sandals and candles to an old basketball, the Lexington yard sales had something for all.

A group of homeless individuals resting in the shade at Lake Sacajawea try to recall if they were included in the annual Point in Time count conducted in January.

The number of sheltered and unsheltered homeless people reported in Cowlitz County's 2019 annual Point in Time Count is the highest in the last 10 years, according to the state Department of Commerce data.