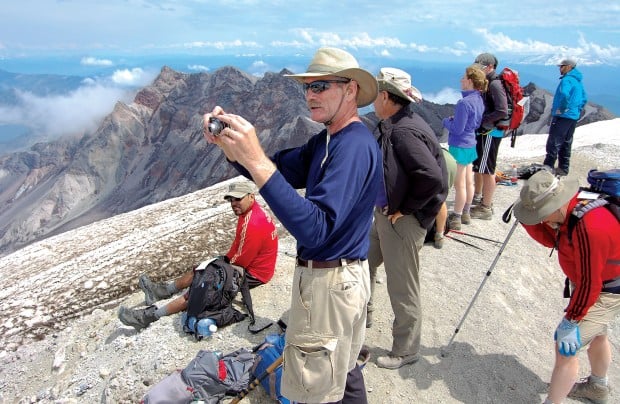 A cluster of climbers gathers at the summit of Mount St. Helens to savor the view and snap up a few memories.

This composite of multiple photos show the summit of Mount St. Helens, looking north from the crater rim. 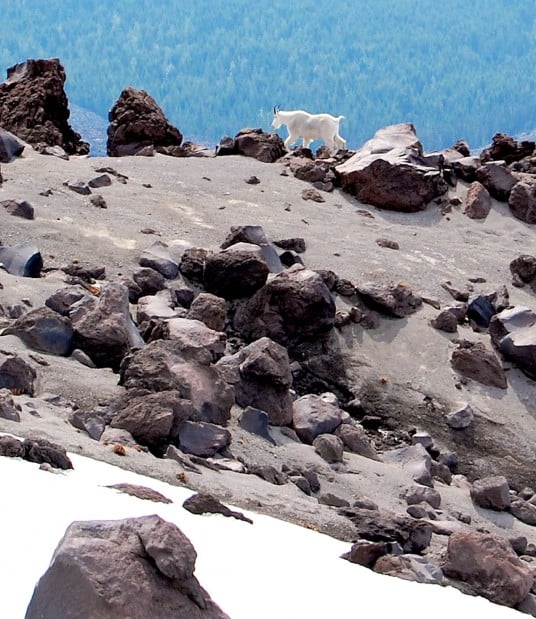 By Evan Caldwell / The Daily News

ON THE SUMMIT MOUNT ST. HELENS — It has become one of the Pacific Northwest's hottest tickets.

Every $22 permit to climb Mount St. Helens is sold out through mid-September. Reservations for peak summer hiking days began hitting the 100-people-per-day limit in early spring.

"The day they posted that permits were available, we signed up and got 'em," Brian James, 43, of Thomasville, N.C., said from the slopes of the 8,300-foot volcano Tuesday. "This is such beautiful country here."

James and his 15-year-old son, Thomas, are among a growing number of people climbing the mountain each year.

James said he and his son were lured to the Northwest for a vacation to climb Mount Baker and Mount St. Helens and visit Mount Rainier.

"The tallest mountain we have is like 6,000 feet," said Thomas James, referring to North Carolina's 6,700-foot-high Mount Mitchell — the tallest peak in the Appalachian Mountain range. "This here is amazing."

Travis Southworth-Neumeyer, executive director of the Mount St. Helens Institute, has a few theories to explain the surge in climbers to the volcano, which was shortened by about 1,400 feet when the eruption on Sunday, May 18, 1980, blew away the old summit.

"It has been kind of a forgotten gem," Southworth-Neumeyer said. "And it's not as commercial as Mount Hood. (Mount St. Helens) is more wild."

The mountain initially was reopened to climbing in 1987, attracting upward of 16,000 hikers a year. However, it was closed from 2004-08 when the volcano's lava dome became active and started growing.

"There is some discussion of establishing a second route on the northeast side near Windy Ridge that could increase capacity a little," Southworth-Neumeyer said.

He said about 25 percent of the climbers are from outside the United States and about 40 percent are from the greater Longview-Vancouver-Portland area. The remainder are from throughout the U.S.

The trail leads hikers through an alpine forest to the timberline, then seemingly straight up the naked mountainside over stretches of crispy snow and hefty boulders. Chipmunks, hawks and mountain goats can make guest appearances during the climb.

It's a hike that can take your breath away, both literally and emotionally. But it can be dangerous, too.

At least one of about 20 volunteer "mountain stewards" climb most weekends to share information and make sure hikers are safe.

In the past few weeks, two climbers were injured in separate glissading accidents where mountain stewards and the Volcanic Rescue team members responded.

"It's still a mountain, it still has dangers," Southworth-Neumeyer said. "But it is also a great way for people to get started in mountaineering."

Lucas Weyland and Ryan Cox, 14-year-olds from Bainbridge Island, Wash., were excited by their first taste of summiting a peak.

"You get to the top and boom, Mount Rainier is right there," Weyland said.

"And the steam coming from the crater was cool," Cox added.

Nearly everyone who bought a permit made it to the summit on Tuesday. Most climbers said they camped at the climbers' bivouac or in nearby Cougar and were making the climb part of a multi-day vacation to the region.

A family of four from Illinois said they tacked the climb onto their vacation itinerary because the 9-mile round-trip hike was easy to do in a day.

Most of their fellow hikers agreed.

"There is pain and anguish going up," said Mike Carlson of Quincy, Wash. "Then you get to the top and see all the colors and wonder — it's a humbling, positive experience."

"It looks a bit different from last time I climbed," said Luce, whose prior trek reached the summit in 1968 — when the peak reached 9,677 feet. "There's a lot of the mountain missing, but it was interesting to see the crater and imagine what it must have been like on that Sunday morning."

Local climbers said scrambling up the mountain is a right of passage — a virtual requirement of residency — for people who live nearby.

"It's kind of an embarrassment if you don't climb it," said Jaclyn Stoltzfus of Portland, who scaled the volcano with three friends.

Joel and Tina Slaughter of Vancouver climbed the mountain two years ago and were back for second summit.

The first climb "was one of my top 10 favorite moments of my life," said Joel Slaughter, before embarking from the trailhead. "I've never experienced something like that before. It brought me closer to God."

Interactive 360-degree panorama view from the rim of the crater

Elevation gain: 4,500 feet. Most climbers don't trek to the highest point, which is more than a hundred feet higher.

Time required: Seven to 12 hours, depending on energy level.

Route: In summer, most climbers start from the end of Road 8100.830 at the "Climbers Bivouac," where there are toilets and camping spots but no running water or picnic tables. The Ptarmigan Trail 216A starts there and climbs through woods for 2 1/4 miles to timberline. From there, climbers ascend the side of Monitor Ridge, a boulder-strewn spine that is the steepest part of the climb. At about 7,000 feet, Monitor Ridge merges with the open upper reaches of the mountain, which is like climbing a sand pile.

Permits: All climbers need a permit, which costs $22 per person from April 1 through Oct. 31. For details, see http://mshinstitute.org/index.php/climbing/index.

Safety: Be aware of receding snow on glissade paths (used to slide down), exposing rocks, stay back from cornices along the summit rim, use sun protection and sunglasses, carry gear for bad weather and pack a first aid kit.

A cluster of climbers gathers at the summit of Mount St. Helens to savor the view and snap up a few memories.

This composite of multiple photos show the summit of Mount St. Helens, looking north from the crater rim.