CATHLAMET — A series of nets strung between pilings just off the Columbia River shore may offer a glimpse of the future of commercial fishing in the river, even though it harkens back to the fishing practices of a century ago.

But some gillnetters say that the experimental fish trap, also known as a pound net, is just another unworkable idea for catching salmon that threatens their livelihoods.

One morning last week, researchers from the Washington Department of Fish and Wildlife and the Wild Fish Conservancy worked the fish trap set in the Columbia a few miles upstream of Cathlamet, near Nassa Point.

“There is no other site like this in the lower river,” said Adrian Tuohy, a biologist for the Fish Conservancy. “It’s a great scientific monitoring tool.”

One net blocks adult fish from swimming near the shore, steering them through a series of other nets that trap them. Then workers tug on lines and pulleys to dump the fish into a submerged sorting box about the size of a refrigerator.

Aaron Jorgenson, a biologist for the Fish Conservancy, donned waders and hopped into the box to identify the fish. Tuohy netted hatchery coho and dumped them into a box with ice — those fish are sold to a fish buyer. Wild fish are tagged and allowed to swim upstream. Tiny radio transmitters are implanted so the fish can be tracked as they swim past upstream dams.

“They never come out of the water for more than a second or two,” said Lisa Harlan, a WDFW biologist helping with the day’s catch. Wild fish caught in gillnets spend more time out of the river before they’re released, which makes it more likely they’ll die from the stress or injury to their gills.

So far, preliminary mortality results from the fish trap are promising. About 99 percent of wild chinook salmon caught in the trap in 2017 survived. The survival rate for wild chinook caught and released from gillnets is 52 percent, Tuohy said.

The fish trap is the latest experiment as fishery managers look for alternatives to the gillnets that commercial fishermen have used in the Columbia River for decades. For several decades, fishery management has focused on helping endangered runs of salmon and steelhead recover, and lowering the competition wild fish get from those raise in hatcheries.

Thirteen stocks of salmon or steelhead that originate in the Columbia River basin are listed under the federal Endangered Species Act. Agencies have spent billions of taxpayer’s money for recovery effort.

In 2013, Oregon and Washington fish and wildlife commissioners adopted a plan that called for gradually ending the use of gillnets in the lower Columbia and having commercial fishers switch to techniques that are less harmful to wild fish. That 2013 plan also called for moving commercial fishing to the sides of the river, and for allocating more of the catch of hatchery fish to sports anglers.

The original goal was to end the use of gillnets by last year, though fishery managers have reported that few goals of the 2013 plan have been met (see sidebar).

Beach seines are strung out from shore and hauled in with strong backs or ATVs. But one-quarter of the chinook caught in the beach seines perished, according to the Fish Conservancy. And compared to the early 1900s, when the seines were used extensively until they were outlawed on the Columbia in 1922, there isn’t nearly as much undeveloped beach available for them.

State biologists tested purse seines — circular nets lowered from boats — from 2014 to 2016. According to an August report to the Washington Fish and Wildlife Commission, the mortality rate for fish caught with purse seines, which crowd fish together, also was too high. And the economics of purse seines are different than for gillnetting, with a larger boat and crew required.

Fish traps similar to the one in operation now were once a common sight on the Columbia. But in 1934, Washington voters approved a ballot measure that outlawed the traps. At the time, the fish traps were blamed for overfishing, though Tuohy disagrees. “It wasn’t the traps,” he said. “It was too much overall fishing in the river — and no management.”

Eight decades later, it was challenging to resurrect a single fish trap.

“There is nobody alive to tell you how to build a trap,” Tuohy said. However, Blair Peterson of Cathlamet had researched the technique that his grandfather once used and had started testing it on his own before the agencies got involved. Peterson declined to be interviewed for this story, citing opposition to the experiment from some people in Cathlamet.

The trap at work this week is considerably smaller than historic ones. And it’s got a 21st century energy ethic, with solar panels feeding a battery to provide electricity to hoist the net.

WDFW and the Wild Fish Conservancy, a nonprofit advocacy group based in Duvall, Wash., started operating the trap in 2016 for research. This year, the agencies decided to sell the hatchery fish to help recover the costs of the experiment, with $24,000 taken in so far. Tuohy said the fish buyer has remarked how much better the salmon look than those caught in gillnets.

A fish trap of this size costs about $75,000 to build, Tuohy said. The overall project budget totaled $494,000 for its first two years. Funding comes from a variety of public agencies.

Historically, only fish processors could afford to build the traps, and then the businesses controlled the price of fish. “Canneries owned a lot of the traps because it was so capital-intensive,” said Irene Martin of Skamokawa, who has written several books about the history of commercial fishing on the Columbia.

Martin’s husband, Kent, who’s a commercial fisherman, said, “I think traps could be a viable alternative, but my sense is they are are not going to give us enough fish to make it work.”

Ryan Lothrop, a WDFW fish manager, said in an email that it’s too early to determine if the gear is cost-effective for commercial fishermen.

Another commercial fisherman, Greg Johnson of Vancouver, said he isn’t opposed to the concept of fish traps, but more research on fish mortality rates and the costs of operating the traps is needed. “We need another tool,” Johnson said. “It looks like Nirvana, but we need to know the numbers.”

The Coastal Conservation Association, a group that is made up of sports anglers, supports the fish traps and calls for more research on the mortality rates of gillnets and alternatives to them. “What we have been doing the past 100 years hasn’t been working,” said Nello Picinich, Washington CCA executive director.

The Wild Fish Conservancy biologists are camping out near the trap through the fall coho run, after which the nets will be removed for at least the winter season.

The conservancy is applying for more grants to operate the trap next year. Lothrop said it would be beneficial to test a fish trap at another location, though the agencies would have to get permits to drive more pilings.

Despite the obstacles to again trapping fish like people did in the 1920s, Tuohy says change is inevitable for the Columbia River fishery “You’ve got to change, or the fishery is going to die.”

The wide-reaching goals of a 2013 plan to restructure commercial fishing on the lower Columbia River are mostly unmet.

Five years ago, fish and wildlife commissioners from Washington and Oregon agreed to a plan that would phase out gillnetting by as early as 2017 and replace it with alternative gear such as purse seines or fish traps.

However, with too-high mortality rates and questions about the economic viability of the alternative gear, commercial fishermen are still using gillnets.

Another goal of the 2013 plan was to give sport anglers a higher percentage of fish. However, “recreational fisheries have only seen marginal benefits to changes in allocations,” according to a report to the Washington Fish and Wildlife Commission earlier this month. The report goes on to say that “the large economic benefits for both commercial and recreational fisheries expected from the Policy were not observed during the implementation period.”

The Washington and Oregon commissions will hold a joint meeting to discuss the plan and how it relates to managing fisheries starting at 9:30 a.m. Nov. 1 at the Heathman Lodge, 7801 NE Greenwood Drive, Vancouver. Meeting topics also include a review of the number of Columbia River guide licenses, guide boat catches and predation in the river by seals and sea lions.

No decisions will be made during the meeting.

Survival estimates comparisons for fish caught in the Cathlamet trap and by other commercial gear, 2017.

Every fall, Zo Gladson gets a lot of questions about his electricity bill.

For the first time in two decades, the PeaceHealth St. John Medical Center nonprofit that helps fund hospital remodels and service for dischar… 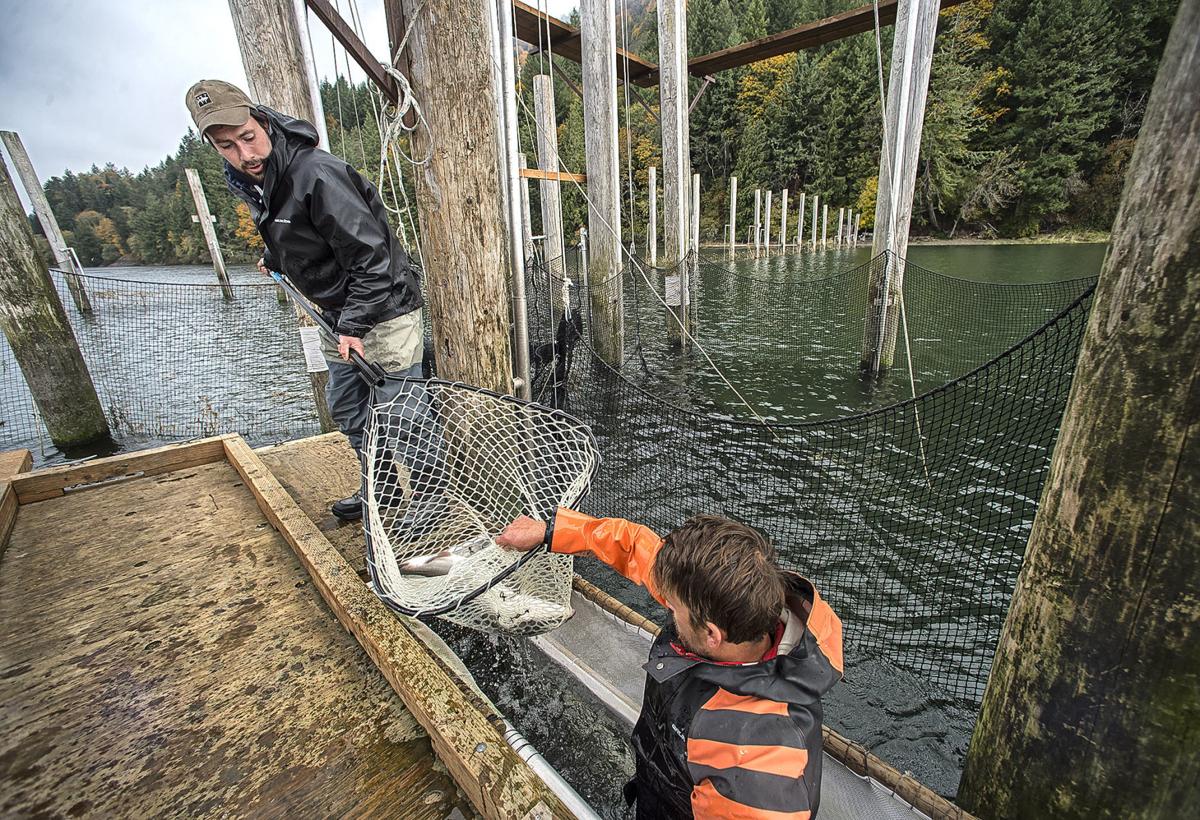 Wild Fish Conservancy biologists Adrian Tuohy, left, and Aaron Jorgenson remove a hatchery coho salmon from the sorting box on the fish trap. The pilings behind them hold nets that first stop the upriver swim of the salmon, then direct the fish through a series of enclosures to the final one behind the biologists. Hatchery fish are sorted for sale while wild stock are released to continue upriver. 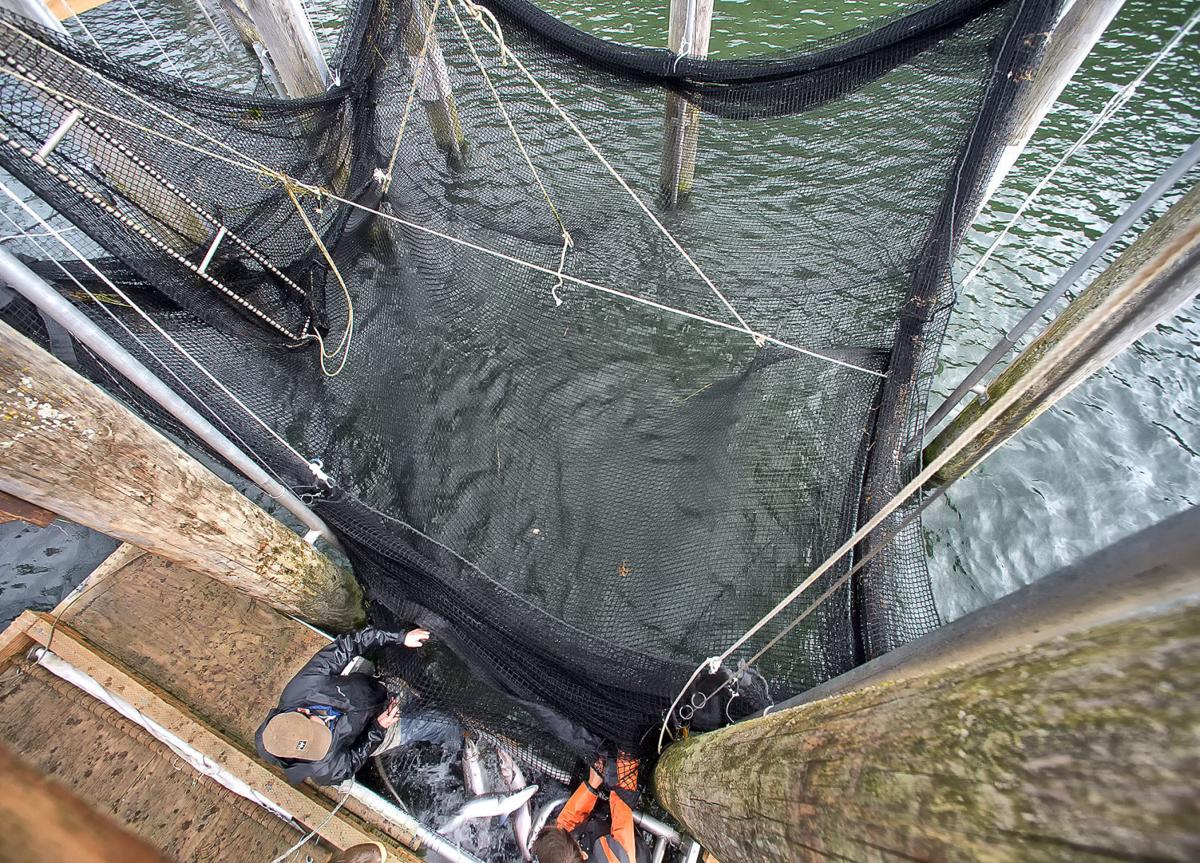 Seen from above on one of the fish trap platforms, upriver-bound fish guided to the heart of the fish trap are quickly emptied into the submerged sorting box, reducing the time they are handled out of the water.