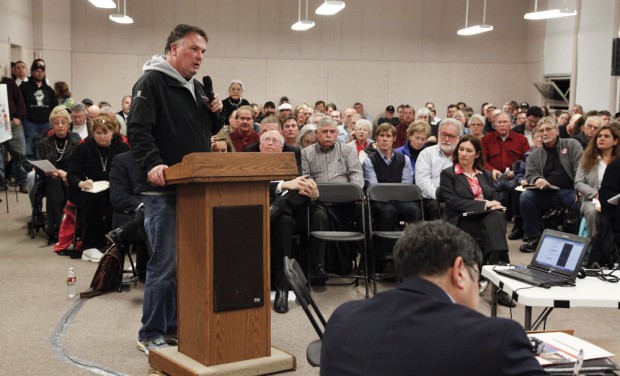 ILWU Local 21 president Dan Coffman speaks Wednesday night in support of the jobs that would be created by coal shipments out of Port Westward as he talks at a Port of St. Helens meeting in Clatskanie. 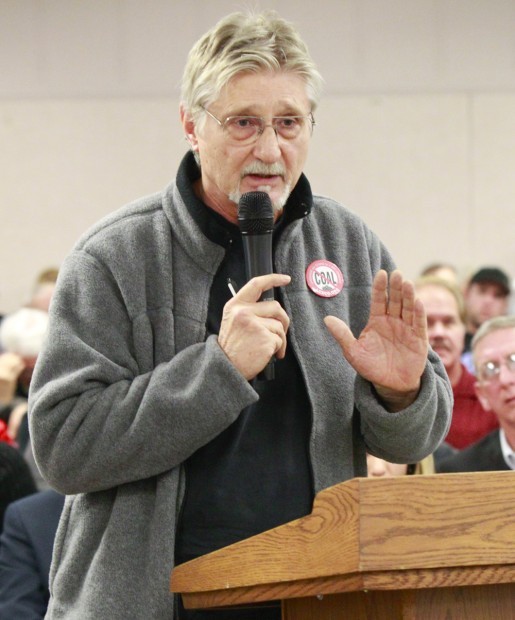 Les Anderson of Longview asks Port of St. Helens commissioners to consider effects of trains and coal dust before approving applications for a coal shipment terminal at Port Westward.

"I'm excited about the jobs that this project can bring, but hopefully we can work through the rail (congestion) issue," said port Commissioner Mike Avent, the lone dissenting vote on the Kinder Morgan proposal.

About 130 people packed into the Clatskanie Community Center to hear both proposals, which port commissioners cautioned are still in the preliminary stages. Both companies must still obtain building permits to move forward.

Ambre wants to start exporting 3.5 million tons of coal to Asia and later expand to 8 million tons. The company would unload coal from then Powder River Basin in Wyoming and Montana at Port Morrow in Central Oregon, then unload the cargo onto barges. Workers would then transfer the coal onto ocean vessels at Port Westward.

If approved, the terminal would employ about 25 workers and start operating in 2013, Ambre officials said. The whole operation would cost about $150 million, with about $40 million spent in Columbia County.

"We listened to the concerns up and down the river, and we scoped the work to address those concerns," Clark Moseley, Ambre's chief operating officer, said.

Added Jay Waldon, a Portland-based attorney representing Ambre, "Our goal is to have no visible coal."

Kinder Morgan is hoping to build a $200 million coal export dock to ship about 15 million tons of coal annually to Asia, according to the port. Company officials said they haven't determined the exact amount of how much coal they plan to export, saying that amount will be included in the permit application later this year.

Several mile-long unit trains would need to go through Rainier daily to service the terminal.

Company officials said they plan to use covered conveyors, water suppression systems and a giant warehouse to limit coal dust.

A lease option secures the rights to the port property until the company is ready to build.

Thirty-six people testified at the public hearing, and nearly three-quarters outright opposed the facilities or had concerns about railroad congestion, coal dust and the wisdom of investing in energy from fossil fuels.

Harvey Williamson of Stella, which is a few miles upriver from the terminal site, said he worried that coal dust wafting from piles during transport could pollute the Columbia River and destroy salmon runs.

"Is it really worth it to satisfy king coal?" he asked.

Sloan Nelson, a Rainier city councilman, said he fears that added train traffic headed for the Kinder Morgan terminal would block customers from reaching downtown tavern on the waterfront.

"My livelihood depends on being able to access my business. Please don't trade our livelihoods for another's down the road," Nelson said.

The rest of the people who spoke, including representatives of the International Longshore and Warehouse Union, said they welcomed the opportunity for more than 100 new jobs in an area still struggling with double-digit unemployment.

"What I see in this development is positive. We're going to put people to work here," said Dan Coffman, president of the ILWU's Longview-based Local 21, which is negotiating with both companies to work on the docks.

Taylor Kissinger of Clatskanie said he's excited that the terminals could create economic incentive for people to stay in Columbia County.

"I am tired of our kids moving because they can't afford to stay here, because there are no jobs," he said.

Editor's note (Jan. 25): A previous version of this story misidentified which company attorney Jay Waldron represents. This version is correct.

BELLINGHAM -- About 800 people packed the Bellingham High School theater Tuesday, March 20, to learn how they can make their voices heard duri…

Coal companies, including a parent of the company proposing to build a terminal in Longview, are investigating the possibility of building new…

ILWU Local 21 president Dan Coffman speaks Wednesday night in support of the jobs that would be created by coal shipments out of Port Westward as he talks at a Port of St. Helens meeting in Clatskanie.

Les Anderson of Longview asks Port of St. Helens commissioners to consider effects of trains and coal dust before approving applications for a coal shipment terminal at Port Westward.