Just days before the unofficial and unsanctioned “We The People” July 4 gathering at Lake Sacajawea, Longview city officials have placed concrete barriers at Hemlock Plaza to discourage equipment setup and continue to urge event organizers to reconsider in light of the rising number of community coronavirus cases.

City officials met with Longview developer Larry Wood and his security team Monday to review his plans for the weekend. The meeting was cordial, both sides said, but neither is budging.

“I encouraged him to reconsider, but at the end of the day, I think we just agreed to disagree,” Longview City Manager Kurt Sacha said. “It is an unsanctioned, unpermitted event. A letter has been written to the organizers informing them of such. We’re doing, I think, what we can to try to discourage them from moving forward with it.”

Wood said he has “tremendous respect” for Sacha and that “we could not have a better city manager.” But he believes so strongly in his cause that he said he’s “ready to die for this.”

“There’s been four times in the last two weeks (when) I don’t even go to bed,” he said. “I go into my office and I pray until I fall asleep, and I wake up and I pray. I think that God is going to do something good here. We’re going to have a message of hope.”

Wood and his fellow organizers have been planning an ambitious Fourth of July gathering at Lake Sacajawea ever since the Go 4th Festival Committee canceled the annual three-day celebration about two months ago. Due to state COVID-19 restrictions on gatherings, city officials have stressed that Wood’s event is not permitted, but they have not moved to shut it down or to forcibly stop organizers.

The “We The People” organizers are promising a car show, food vendors, local music performers, a kids’ parade along the lake’s gravel path, paddleboard and kayak races, a talent show and more, which are listed on the event website, https://www.wethepeoplecc.com. On Sunday, organizers will hold a community worship service and encourage attendees to spend the afternoon cleaning up.

State Rep. Jim Walsh, an Aberdeen Republican who has been a impassioned critic of Gov. Jay Inslee’s coronavirus social restrictions, confirmed Tuesday that he will be a speaker at the event. In addition, Wood said he’s invited Cowlitz County Commissioner Arne Mortensen, state gubernatorial candidate Joshua Freed and Longview Port Commissioner Jeff Wilson (a Republican running for the 19th District state Senate seat). Wilson told TDN he will not be at the event.

But the event received perhaps its biggest boost this month when organizers announced country music star Lee Greenwood will perform. Greenwood is set to play at 7 p.m. on Saturday, according to his concert schedule on Facebook.

Wood has said he hopes the event brings in as many as 10,000 people to the lake, roughly a third of the average Go 4th turnout, but he acknowledged Tuesday that turnout might not reach that high.

The city has placed concrete barriers and signage at the Hemlock Street entrance to Martin Dock to discourage the movement of equipment in and out of the area, Sacha said. That could impede organizers’ ability to construct a sound stage for Greenwood, although Wood said they will work, and drive, around those obstacles.

Wood says the event is an expression of the rights protected by the First and 14th amendments to the U.S. Constitution. (The 14th amendment says in part, that “no State shall make or enforce any law which shall abridge the privileges or immunities of citizens of the United States; nor shall any State deprive any person of life, liberty, or property, without due process of law ...”)

“Civil disobedience is a very intentional part of our strategy at this point,” Wood said. “If people are more offended that we’re going to roll over the grass to set up for our Independence Day than they are (by those) rolling over our Constitution, then those people don’t live in the same America that I do.”

In an interview last week with San Diego TV station KUSI, Greenwood said he will be able to perform in person at the event safely.

“This may be 10 or 15,000 people, but they’re all going to be moved apart from each other and it’s been planned very well from the beginning,” Greenwood told a reporter.

Former Cowlitz-Wahkiakum Labor Union President Shawn Nyman recently reached out to Greenwood’s team with concerns over the safety of the event. Greenwood, 77, is himself part of the at-risk population for the virus, and Nyman is skeptical that 10,000 to 15,000 people can properly socially distance for a concert at the lake.

And from a personal level, Nyman is concerned about both the safety of the event and the political tinge it brings toward celebrating Independence Day.

“They’re going forward without getting permits and crowd control, traffic control, and getting the health department involved, which is super important,” Nyman said. “It’s one of the reasons the Go 4th committee has been successful. They have all of those things taken care of, and now none of it is.”

Wood said the event encourages attendees to practice social distancing and wear masks, but they won’t require or enforce it. Out of concern for Greenwood’s health, there will be no “meet and greet” session before or after Greenwood’s performance.

Sacha declined on Tuesday to share details on how the city will deal with the event when it takes place. So far, the city has not moved to shut it down entirely or to threaten arrests or other law enforcement action. Longview Council member Ruth Kendall and Longview Mayor MaryAlice Wallis proposed but

withdrew a resolution last week to cancel or fine any unpermitted events.“I think it’s still being fleshed out,” Sacha said. “At this point, there are so many unknowns with how they might react to however many actions are taken. It’s hard to project how the city might respond. Our desire is to inform and educate and hopefully get people to understand that at the end of the day we really are trying to protect the health and safety of our community.”

Wood said he’d fully cooperate with police, if it came to that, and said the organizers behind “We The People” have the utmost respect for law enforcement. They won’t destroy property or engage in violence, he said. If city workers “hassle” the organizers, Wood said he’s instructed them to stop and film them. If a police officer arrives, participants should do what the officer says, Wood said.

“If police want to come over, pick me up, they know my cell number. I will sit down on the ground, or drive myself to jail, for them,” Wood said. “But I’m not going to listen to any city employee other than somebody who’s sworn to uphold the Constitution. So we are moving in. This is a fight, but not with blood, and not with baseball bats and guns. This is a fight for our Republic. It’s really getting real now. I’m all in.”

He cited the “CHOP,” an ongoing, roughly six-block protest area in Seattle’s Capitol Hill area, in arguing that conservatives have been forced to play by a different set of rules when it comes to holding gatherings that go against the governor’s stay-at-home and social distancing orders.

Balancing the organizer’s right to free speech and assembly with public health goals is not an easy task, Sacha acknowledged, but the event also doesn’t resemble your typical protest.

“I think we’ve been clear from the onset,” he said. “We certainly support everyone’s right to peaceful assembly and freedom of speech. That’s not coming into question at all. But I believed it’s being demonstrated that this goes beyond that ... Be it a talent show, paddle-boarding contest, the concert. ... And then we’re talking about mobile vendors coming in, a car show perhaps, establishing or setting up portable restrooms. (That’s) not what we would normally see as part of a peaceful demonstration. This clearly, I think, has the makings of what I think we would all consider to be an event.”

It’s too early to say for sure, but so far, large protests across the country spurred by the Minneapolis police killing of George Floyd don’t appear to be driving surges in virus cases, researchers say. According to researchers quoted in the Seattle Times, being outside likely reduces the chances of spreading the virus significantly, and officials have touted the value of wearing a mask in slowing the spread as well.

Cowlitz County is still in Phase 2 of Gov. Jay Inslee’s “Safe Start” coronavirus re-opening plan, which allows only for gatherings of 5 non-household members per week. Phase 3 bumps that number up to 50, but it’s not until Phase 4 that effectively unlimited gathering sizes are allowed.

For now, the Governor’s office has paused any county from advancing to Phase 4, citing rising virus transmission rates.

A Woodland church where leaders, singers and many worshipers did not wear masks switched to online-only worship last weekend after positive CO…

Lawyers for Dawn Rolfe, on trial in Longview this week for plotting to kill her estranged husband, said Wednesday her alleged scheme to shoot …

Longview’s only big-box office supplies store is set to close in November, growing the vacant portion of one block in the Triangle Shopping Ce…

Cowlitz County reported its seventh COVID-19 death Friday, a man in his 90s with underlying health conditions who was hospitalized, according …

Kelso mall recovering from closure, waiting for theater to reopen 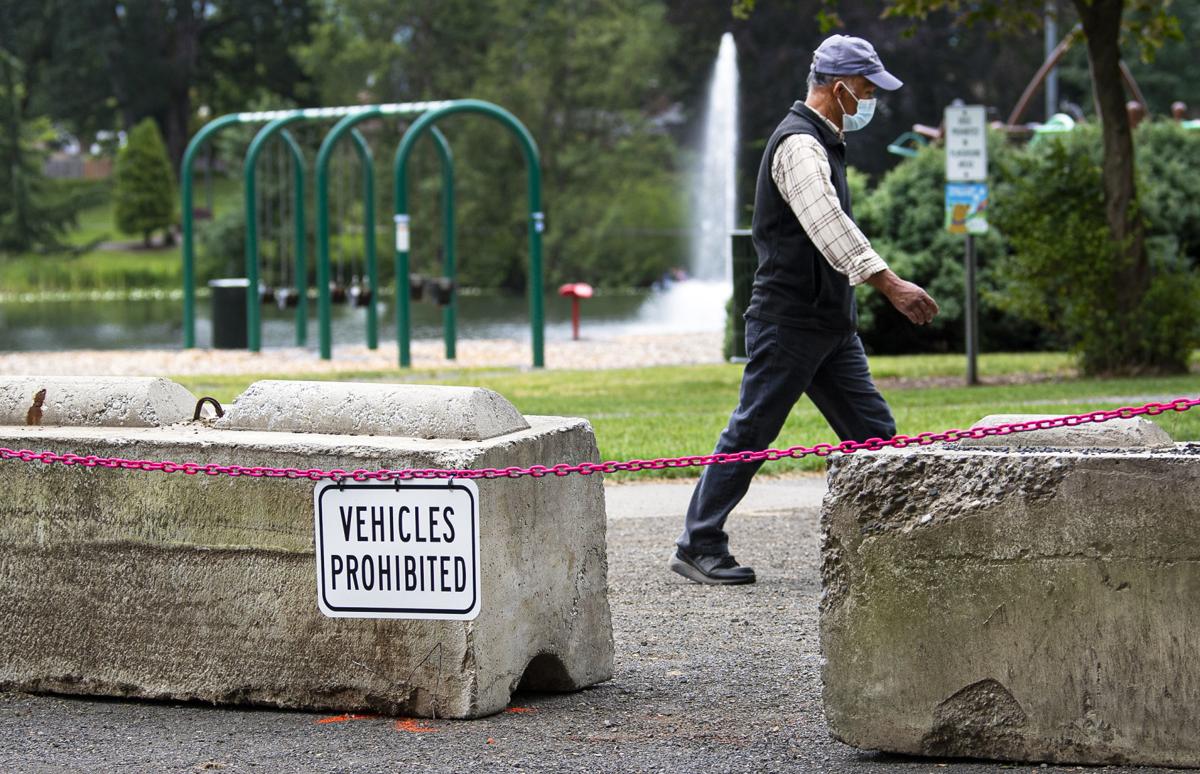 A person wearing a face mask walks past the concrete barriers placed at Lake Sacajawea to block vehicles from accessing Martin Dock, where an unpermitted gathering is scheduled on July 4. 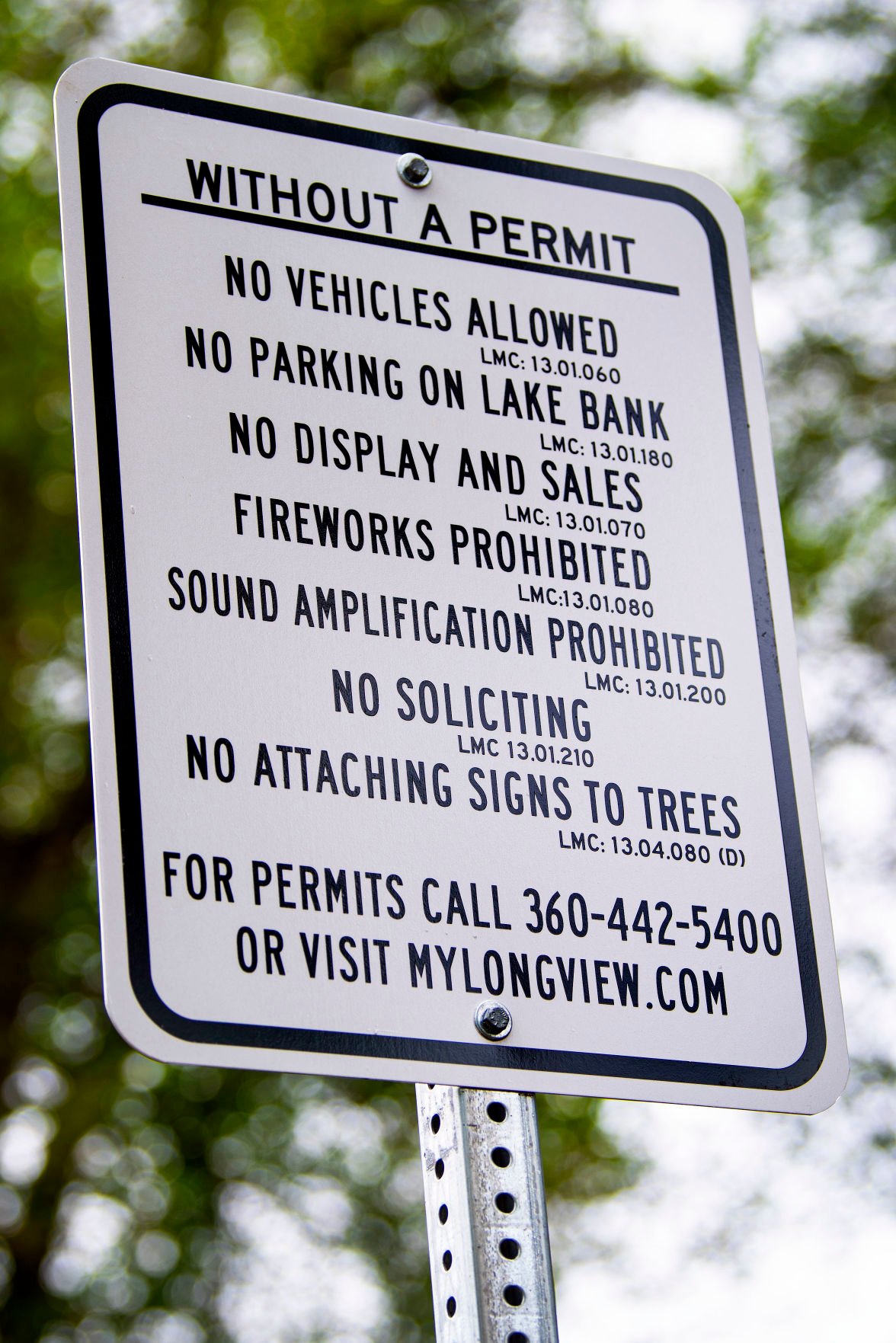 A sign at Lake Sacajawea lists activities that are prohibited without a permit. 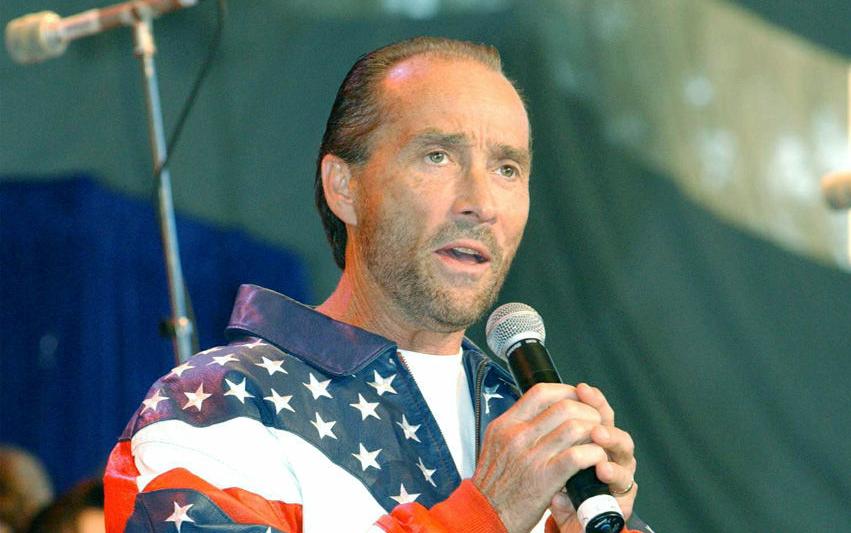