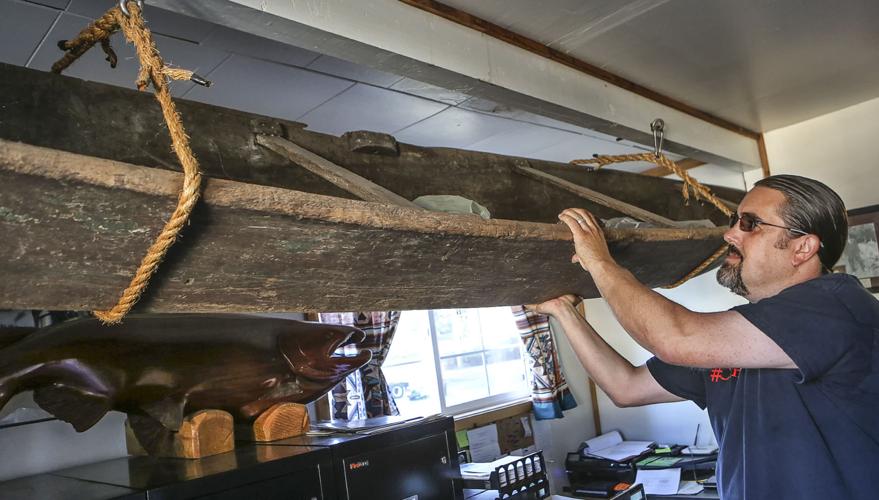 In the Chinook Nation Office in Bay Center, Tony Johnson shows a ‘classic bay canoe given to former hereditary chief Lewis Hawkes when he was 12. Johnson guesses the canoe is more than 100 years old. 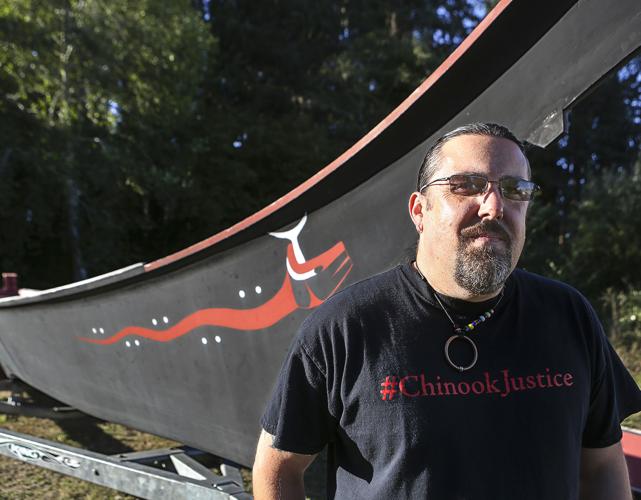 Chinook Nation Chariman Tony Johnson has put in his time paddling ocean waters in the canoe behind him. Now he's trying to navigate political seas to finally get the Chinook Nation official federal recognition. Thinking of the length of time his dad and his uncle have been working and waiting, he says he 'want(s) to put on a real fight and finally get it done.' 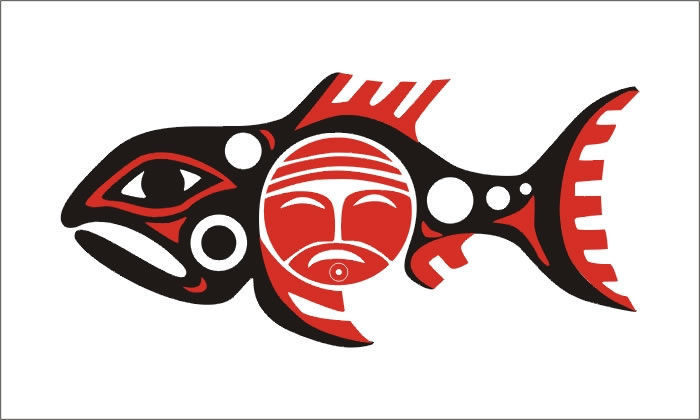 BAY CENTER — Every day for the last three months, the Chinook Indian Nation has addressed a letter to President Barack Obama about a subject that tribal chairman Tony Johnson calls “a matter of life or death.”

“I just can’t say it more strongly than that. … We have to fix this problem, and we’ve been working on this problem for over 100 years,” he says from tribal headquarters here along the wide mud flats of Willapa Bay.

Johnson, 44, was speaking of the tribe’s long and frustrating effort to win federal recognition, a task he’s led since his election as tribal chairman in June.

Federal recognition would make 2,700 Chinook nation members eligible for a wide range of federal health, education and other benefits and allow to the tribe to establish a reservation. And there are other reasons, which is why Johnson face reddens and his eyes narrow when he talks about the issue.

The tribe briefly gained recognition in 2001, but the administration of George W. Bush revoked it shortly afterward. In Johnson’s view, the tribe has been robbed of its rights to fish and hunt in its native land. He laments the fact that his five children don’t know how to fish, and he remembers tribal elders having to forfeit their fishing cards decades ago.

“This is stuff happening in our own lifetimes. I’m not an old man and yet in my lifetime our rights to fish here were taken away as Indians,” said Johnson, of Raymond.

Before European settlement of the region, the Chinook occupied the Southwest Washington Coast and villages up the Columbia River.

The U.S. Bureau of Indian Affairs always recognized that there was a Chinook Tribe when Captain Robert Gray sailed into the Columbia River in 1792 and when Lewis and Clark reached the Pacific Ocean in 1805. But the bureau originally concluded that the Chinook dispersed in the 19th Century and ceased to function as a political entity after 1855, when the U.S. government failed to get the tribe to sign a treaty, and broke up as a social group after 1880.

In addition to opposition from the BIA, the Chinook have been opposed by other tribes, particularly the Quinault, who were instrumental in overturning the short-lived 2001 recognition.

Johnson called the tribe’s lack of status a “fluke of fate” and a mistake.

“This can happen with the stroke of a pin, so really if people want it to happen it’ll happen,” he said.

Johnson’s roots as a Chinook run deep. He was only four months old when he enrolled in the tribe. His father, Gary Johnson, formerly served as tribal chairman. In 1991, young Tony designed the Chinook flag – a red-and-black rendering of a Chinook salmon with the contours of a human face at its center.

Johnson and his wife are sticklers for traditional food. His home is filled with food they gather outside, such as fennel heads and salmonberry chutes. His life revolves around such traditions, whether it’s sipping Indian tea or speaking his native language, and he is perhaps best known for being an educator of Indian traditions.

“He is extraordinarily passionate about the culture of the Chinook, and his life work has been that,” Sayce said.

Aside from being Chinook tribal chairman, Johnson works as the education director for Shoalwater Bay Indian Tribe. His wife, Mechele, is the treasurer of Shoalwater’s tribal council.

Johnson said he grew up learning about Chinook history and culture.

“Current politics of the day were just something in the house, something that was driving us,” he said.

In his late teens, Johnson said he sought out elders with insights into Chinook history. He even took several quarters off throughout college to come home and talk with elders. Though he later earned degrees in metal smithing and anthropology from Central Washington University, Johnson said he learned the most from those in his tribe.

“The time with elders, time with our councils – that I consider to be the most important education I’ve had,” he said.

He sees his leadership role as an extension of something he’s been doing all along – driving a fight for tribal status.

If the Chinook succeed, they’d look for more than hunting and fishing rights. Recognition would help preserve and carry on the tribe’s language and culture, help it build a health clinic and provide drug and alcohol counseling, Johnson said.

“I think everybody knows that Indian country has problems,” Johnson said. “We’ve got every problem of an Indian reservation and none of the means of dealing with it.”

Federal recognition would legally make it possible to erect a casino, but Johnson said that’s not at the forefront of the tribe’s agenda.

“The ability for tribes to have casinos and gaming is something that’s so new in this story of ours, but I think probably around the country there are communities that organized and either got status or are fighting for status expressly around this idea of a business,” he said.

“That causes us a huge amount of grief,” he added. “We hired our first lawyers in the 1890s. This is a history of effort for justice for the community that predates all of that by a century.”

Johnson is optimistic. He said it’s simply a matter of educating the public.

“The reality is that if you really look at it fairly devoid of politics, there’s only one obvious answer,” he said. “They just need to straighten this out, and let Chinook move forward as the federally recognized tribe that we are.”

“We have to fix this problem, and we’ve been working on this problem for over 100 years.” — Tony Johnson
Chairman, Chinook Indian Nation

"We have to fix this problem, and we’ve been working on this problem for over 100 years."

It's time for change at Longview's schools, parents say. See how the district responded.

Three friends who met working in the beauty industry created a spa offering services that fit their values of honesty and welcoming everyone.

Amid “extremely high volumes” at its emergency department, PeaceHealth St. John Medical Center is asking patients to seek care in the “most ap…

VANCOUVER — A Vancouver man was sentenced Monday to more than 5½ years in prison, in part, for urinating into milkshake mix while working as a…

The body of the man pulled from Lake Sacajawea Wednesday afternoon has been identified as Mark D. Holt, 61, of Yakima.

Fire officials hope the bursts of rain and cooler weather beginning Wednesday will help slow the spread of the three large fires in the national forest.

Robin Baker celebrates working at Longview's Koelsch Communities for 46 years. But she's not retiring yet.

When Robin Baker arrived to her first housekeeping job interview in 1976, she didn’t expect she would start immediately — still in her heels —…

VANCOUVER — Nearly two months after the Aug. 2 primary election, the 3rd Congressional District’s top two candidates argued why they are the b…

In the Chinook Nation Office in Bay Center, Tony Johnson shows a ‘classic bay canoe given to former hereditary chief Lewis Hawkes when he was 12. Johnson guesses the canoe is more than 100 years old.

Chinook Nation Chariman Tony Johnson has put in his time paddling ocean waters in the canoe behind him. Now he's trying to navigate political seas to finally get the Chinook Nation official federal recognition. Thinking of the length of time his dad and his uncle have been working and waiting, he says he 'want(s) to put on a real fight and finally get it done.'