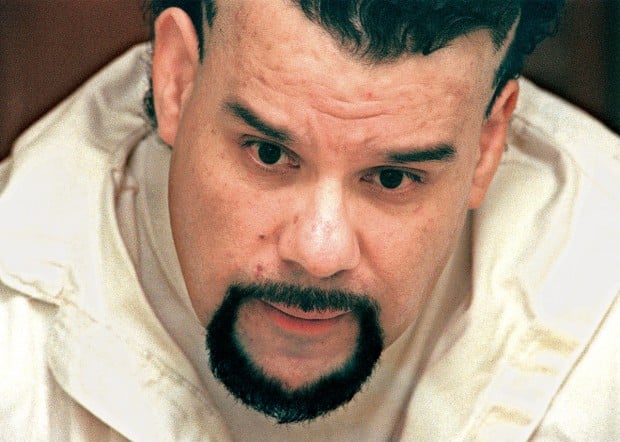 Notorious murderer Joseph Kondro, who was serving a life sentence for raping and killing two Longview girls, died in the state prison at Walla Walla on Thursday of natural causes, state corrections officials reported Friday. He was 52.

In 1999, Kondro was convicted of kidnapping, sexually assaulting and strangling 8-year-old Rima Traxler in 1985 and 12-year-old Kara Rudd in 1996. Authorities also suspected Kondro killed 8-year-old Chila Silvernails of Kalama, who disappeared in April 1982 and was later found dead. But they never developed enough evidence to prove it.

Friday, Kara Rudd's grandfather said he was "happy" to learn of Kondro's death, adding that the years since Kara's murder have been tough on the family.

Police have said they don't believe an admitted child serial killer could go from 1985 to 1996 without killing, but attempts to connect Kondro with other missing children's cases have been fruitless.

"I still want to see that death certificate ... just to lock up that little bit of fear in my heart that he could do this again," said Cowlitz County Prosecutor Sue Baur, who participated in the legal proceedings against Kondro.

"I have only twice in 25 years felt the presence of true evil," Baur continued Friday. "When he and I would look at each other in the courtroom, it was a feeling that there was nothing there in those eyes. ... I just never got any shred of humanity from him."

On Jan. 4, 1997, a search team found 12-year-old Kara Rudd's body beneath an abandoned car in the woods on Mount Solo, six weeks after her mother reported her missing.

Kondro, then 37, was the prime suspect in her disappearance. He was already in jail, facing charges of witness tampering and first-degree child rape and molestation of three girls, ages 7, 9 and 10.

For two years, Kondro had refused to cooperate with investigators, even though his DNA linked him to Kara's body. Then, in a bombshell courtroom announcement, Kondro pled guilty to raping and strangling her — and confessed to killing Rima Traxler 14 years earlier. Rima's remains never have been found.

Kondro, a drug addict and petty thief, had been longtime friends with both victims' parents and had no trouble luring the girls into his car.

In answering to both crimes, Kondro dodged the death penalty. Superior Court Judge Jim Warme sentenced him to 55 years with no chance of parole at the Washington State Penitentiary in Walla Walla. Kondro never expressed any remorse for his deeds and vowed to kill again, even behind prison walls. He hinted there have been other victims but saw nothing to gain by confessing.

"If you hook up a meter to my emotions, they're flatline," he said in a 1999 prison interview with a Daily News reporter. "I don't know where my emotions are. ... I couldn't give a damn what anybody thinks."

"I know Rima's mom and us, we lived in horror and terror for a long time. Now it's finally over," said Janet Holden, 50, of Longview. "Now we just live our lives as best we can. Not much else we can do."

Families of 9 killed in SC church settle with feds

Families of 9 killed in SC church settle with feds

Most Notorious: Joseph Kondro was a smooth-talking killer

Rima Traxler's parents always warned her not to get in anyone's car unless the person knew the secret password. This man, however, wasn't a st…

A California woman has published an e-book about the life of Longview child-killer Joseph Kondro, who died in prison last May at age 52.