Two crashes blocking lanes on I-5 near Kelso, Kalama

“It’s proven to be a real success,” Jackie Ferrier, project leader for the Willapa National Wildlife Refuge Complex said. “There’s some deer use, the deer are protected (from floods), there’s a really good fish response which is great, and the waterfowl response has been fantastic as well.”

The project was sparked in 2014, after engineers found a failing portion of the Steamboat Slough dike. If the erosion fully undercut the dike, the refuge could have flooded, as well as possibly State Route 4.

“The project was a little slow to get started,” Ferrier said, because the dike and road were not owned by the Fish and Wildlife Service, so they could not do any repairs, and the county and diking district which did own the road were not able to afford the repairs.

The dike was not under the Army Corps of Engineers’ jurisdiction, either, “so they didn’t have the authority to spend money on it,” Ferrier said.

“We worked together, all of us, to come up with a different method, which was the restoration of the Steamboat Slough,” Ferrier said.

When it became a tideland restoration project, the U.S. Army Corps of Engineers could get involved with the 68-acre, $6 million project, and federal salmon recovery funds were available. The changes included building a new mile-long dike to replace the failing section of the Steamboat Slough levee and opening that land back up to salmon.

The new dike was built behind the old one, before the 1920s-era dike was breached in two places to allow the water to flow into the new channels.

Such off-channel wetlands once were common along the lower river and coastal area of the Northwest and were essential to young salmon and other wildlife. Much of it was diked and developed, but there have been other reversals. For example, hundreds of acres of tidal wetlands were restored when officials breached dikes at the Nisqually River Delta north of Olympia.

While there was concern in 2014 that the plan would ruin public access to the Columbia River provided by Steamboat Slough Road, Ferrier said visitation actually has increased.

“On the setback levy there’s now a new trail that’s open for hiking and biking and it’s become so popular,” Ferrier said. While there are no trail counters to provide exact numbers, overall visitation to the refuge also is up and “people are enjoying it.”

Columbian white-tailed deer are unique to Southwest Washington and Western Oregon and are listed as threatened under the federal Endangered Species Act. Ferrier said the Cathlamet refuge is home to one of two sub-populations, and providing a safe place for deer is “what the refuge is all about.”

“This levee breach would have compromised their safety and the refuge,” Ferrier said.

While Fish and Wildlife did an emergency translocation of some deer to the Ridgefield refuge, the levee project ultimately was successful, and deer populations have returned to pre-translocation levels. That’s about 80 to 100 deer living on the Cathlamet refuge.

The new levee also is holding up well. While there was a little erosion that was fixed after it was first built, Ferrier said after plants grew on the levee “we haven’t seen any further erosion.” That’s because the setback levee’s position is farther away from ship channel traffic and waves gives it more protection.

“Fast forward to today, and we have this wonderful floodplain restoration,” Ferrier said. “The river is now able to connect using those breaches and flood that area and then unflood, the tides come in and out and the habitat is beautiful.”

Native plants have increased substantially, Ferrier said, and the restored wetlands are a hotspot for migratory birds, salmon, and even the deer eat the plants when the tides are low.

Salmon, both juvenile and adult, also have made use of the new habitat. Ferrier said the National Oceanic and Atmospheric Administration has done sampling and pit tag studies in the past and found juvenile salmon and adult steelhead and Chinook salmon all move in and out of the estuary.

“Adult chinook and steelhead come in when they return to go back up the river to spawn in the Snake River basin,” Ferrier said. “That’s more than they knew would happen in the restoration. It’s really kind of been a win-win-win.” 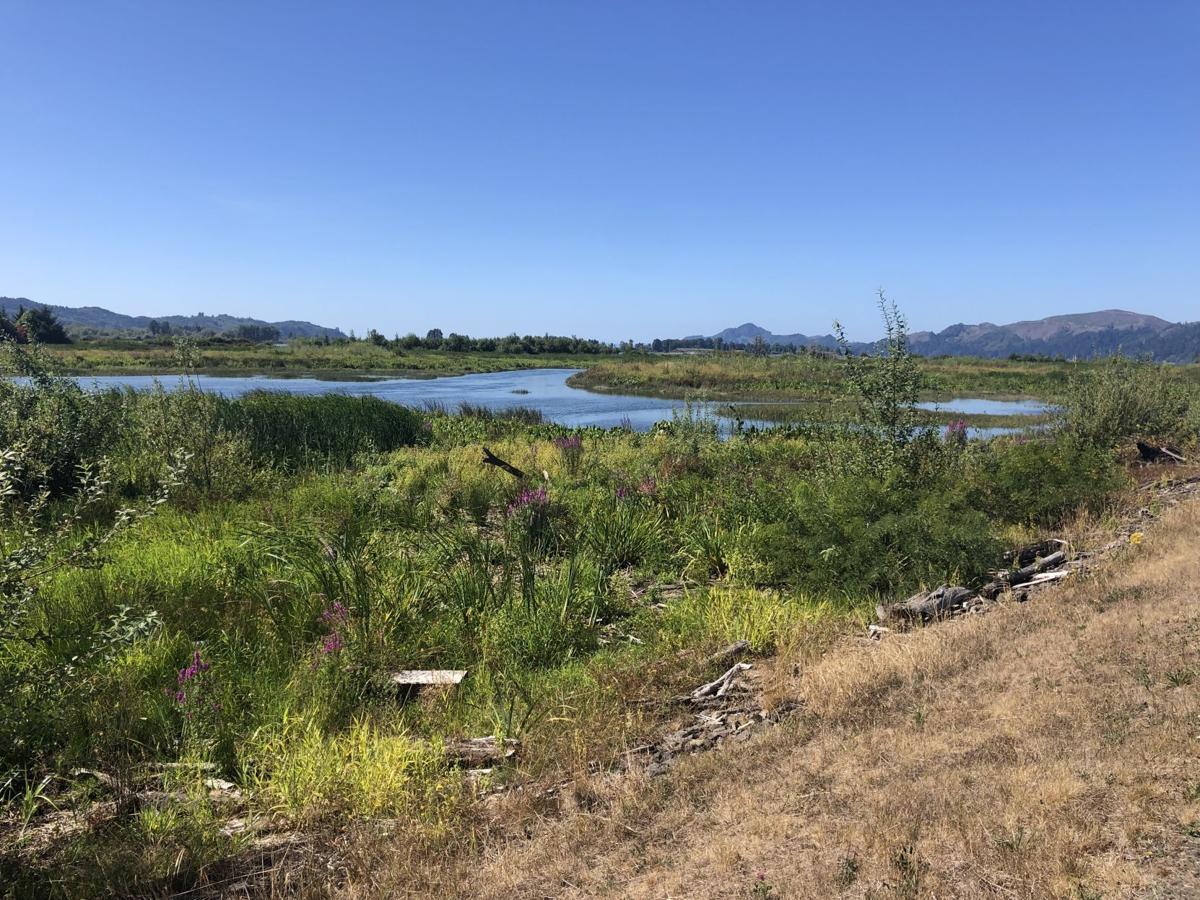 The wetlands created by breaching the older, failing dike can be seen from the White-tail Trail, which runs along the new dike. 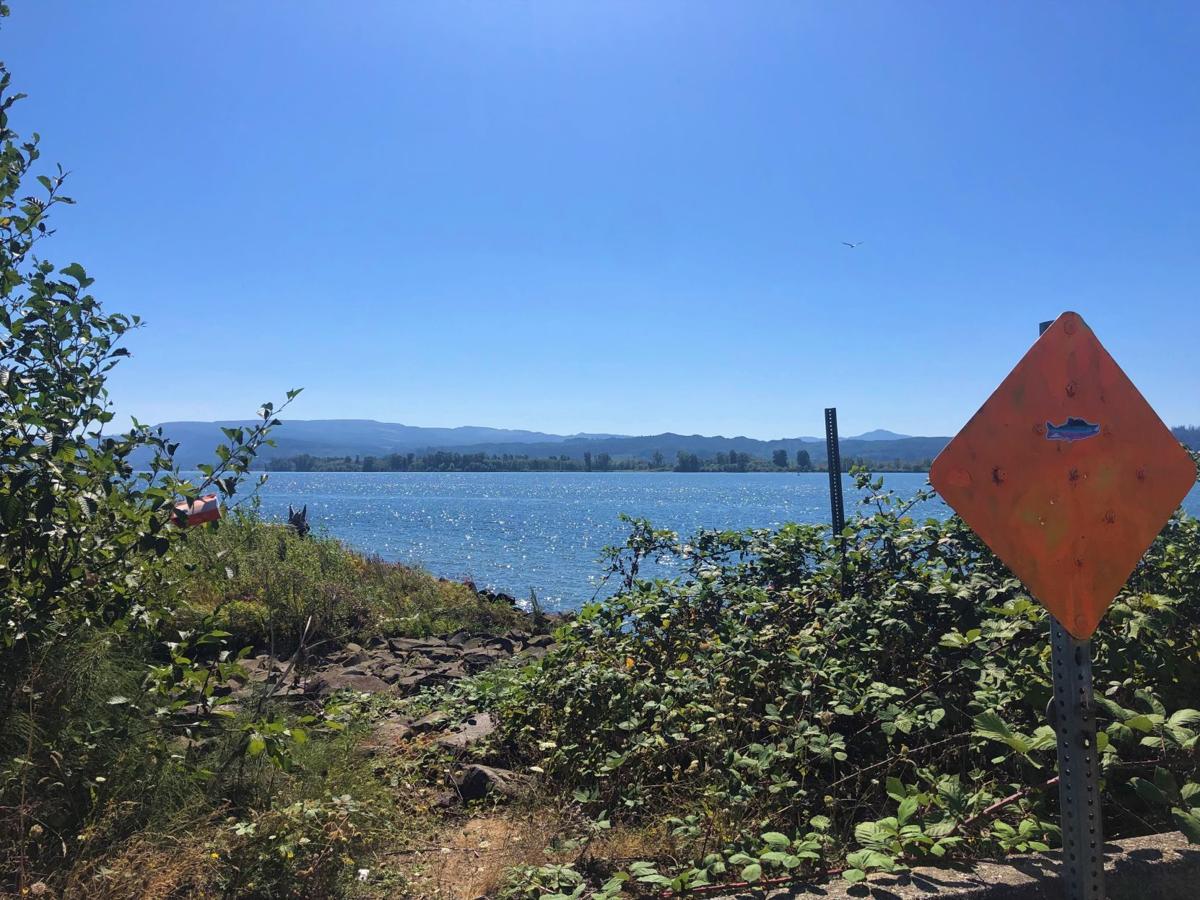 The end of Steamboat Slough Road, which used to be a continuous loop before the failing dike was cut.