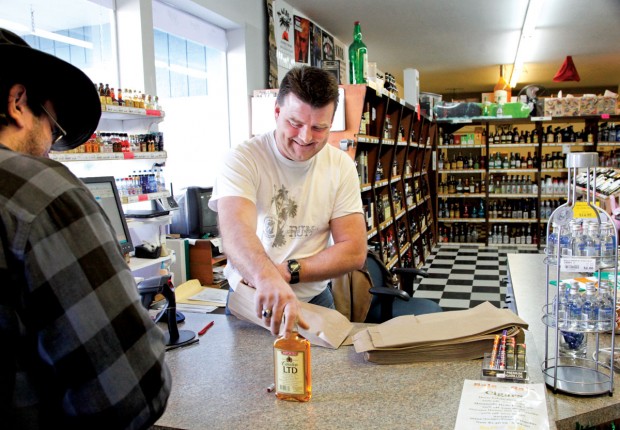 Castle Rock Spirits manager Ed Morrison still has all the regular products the store used to sell as a contract staye liquor store. 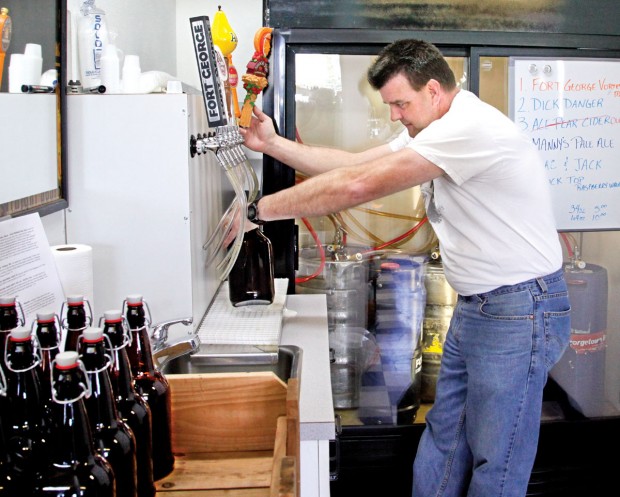 Ed Morrison fills a growler bottle with Shock Top from kegs behind him as Castle Rock Spirits brings in a wider variety of products to continue to attract customers after large retail grocery stores are able to begin selling liquor.

CASTLE ROCK — Ed Morrison and Michelle Whitten started early on expansion plans for their contract liquor store, and they say they hope it's enough to allow them to compete with large-scale retailers in Washington's new era of liquor privatization.

They moved Castle Rock Spirits to a more visible location at 1254 Mount St. Helens Way last year, doubled the store size, started selling both cigars and locally brewed beer and wine and boosted sales of gift and novelty items. Now that voter-approved Initiative 1183 is two months away from taking effect, Morrison said his store will likely need to raise prices and focus on high-end specialty liquor to remain competitive.

"We wanted to expand the store and make a living of it," Morrison said.

So far, 18 retailers in Cowlitz County are seeking permission to sell liquor on their shelves, including Castle Rock Spirits, according to the state's Liquor Control Board. Those stores include a mix of national and regional retail chains, such as Safeway, Fred Meyer, Walmart, Target and Winco, and a handful of locally owned retailers.

Castle Rock Spirits is the only store in town seeking a liquor license, but Morrison said the store will likely lose some business to larger retailers in Longview and Kelso.

I-1183 was approved statewide last November with about 58 percent of the vote. The measure cuts the state out of the liquor business and allows private retailers with stores larger than 10,000 square feet to sell spirits. Retail giant Costco spent an unprecented $22 million to pass the measure, which was backed by other large grocers.

Opponents have filed suit to overturn privatization, arguing that I-1183 was unconstitutional. Cowlitz County Superior Court Judge Stephen Warning upheld the measure in March. The state Supreme Court is scheduled to hear an appeal May 17, and both side are clamoring for a decision before the initiative takes effect June 1.

I-1183 includes a 10 percent fee for retailers and 17 percent fee for distributors, which initiative authors included to pay for public safety programs and replace lost revenue to the state from liquor sales. Distributors say they believe the new fees will mean higher prices for consumers.

Morrison said distributors told him to expect wholesale price increases between $2 and $10 per bottle now that the state is out of the liquor business, which will translate to higher prices for consumers. He added that he and Whitten will need to buy inventory from multiple distributors, which could add extra bookkeeping labor to a store that only has one other employee.

Meanwhile, bidders are already submitting offers for the 167 state-run stores in Washington, including two in Longview, in an online auction that closes April 20. The minimum bid is $1,000, and all bids are submitted by user names that keep the bidders identities a secret until the auction is complete, according to the state Liquor Control Board.

At the same, 41 bidders are seeking to take over all 167 stores statewide. The top offer is $555,100, and the liquor control board officials say they expect bidding to pick up this month.

Other locally owned retailers see liquor privatization as a possible untapped market that could boost business. Prospector Liquidation at 841 Third Ave. in Longview is one of region's largest sellers of independent beer and wine labels, and owner Nate Thurman said a small liquor selection would be a nice complement.

"Naturally, (private liquor sales) came available so we thought we'd step into it," said Thurman, who opened the deep discount store in 2003.

He said that he expects to start with a small selection of three brands of popular liquor types, such as vodka, gin or whiskey, then expand if the business is profitable.

Thurman added that he did not support I-1183, but he figured he would apply for a retail license because his store is large enough to qualify under the initiative's guidelines. He said he knows that the large grocery retailers will have an advantage because they can buy directly from manufacturers, but he believes his store can compete on prices.

"We price stuff so cheap, that it could grow huge," Thurman said.

Morrison said he has concerns that Castle Rock Spirits might eventually have to close because the store can't keep with big-box retailers. So far, no other stores in Castle Rock are seeking to sell liquor, and most local customers have told him they would support their local business, Morrison said.

"They're willing to pay a dollar or more if it supports a family business," Morrison said.

Liquor prices showing no signs of coming down

In a surprising reversal, a Cowlitz County superior court judge ruled Monday that a voter-approved liquor privatization initiative does not vi…

Washington on Thursday opened an online public auction of its state-run liquor stores, beginning the process of loosening up an industry that …

A lawsuit in King County Superior Court that would stop implementation of Initiative 1183, which privatizes the state's liquor business, will …

Cowlitz, Wahkiakum only western counties to vote against liquor privatization

Statewide, voters overwhelmingly approved a plan Tuesday to shut down state-run liquor stores and allow the sale of hard alcohol at grocery st…

Dave Brar knows he will face stiff competition when he takes over the state-run liquor store near the Fred Meyer in West Longview, but he's be…

Patrons rushed to the Triangle Center liquor store Tuesday, scrambling to pick up their favorite brands of spirits before the state closes the…

The Washington Supreme Court upheld the constitutionality of the state's liquor-privatization initiative Thursday, a day before private retail…

Castle Rock Spirits manager Ed Morrison still has all the regular products the store used to sell as a contract staye liquor store.

Ed Morrison fills a growler bottle with Shock Top from kegs behind him as Castle Rock Spirits brings in a wider variety of products to continue to attract customers after large retail grocery stores are able to begin selling liquor.