Become a Member
Read Today's E-edition
Share This
Fossil fuels and the future: Where will Cowlitz County go now?
0 Comments
Share this

Editor’s note: This is the second of a two-part series on the changing landscape of fossil fuels in Cowlitz County.

Cowlitz County’s economy was first built on logging and timber exports, then paper mills and other manufacturing, so the apparent decline in fossil fuel-based projects is a concern for some and a cause for celebration for others.

The way environmental activist Diane Dick sees it, “If we have scared off fossil fuel projects, I’m not crying about it.”

“It certainly makes my life easier,” she said. “Hopefully more fun stuff is coming to town we can all get behind. I’m really hoping it’s solar.”

Cowlitz Economic Development Council President Ted Sprague said he’s open to all kinds of projects, including green ones, but the area needs large manufacturers to “bolster our economy and keep our restaurants open and fire stations open.”

“These projects pay the taxes that allow us to have good schools and roads and everything else,” he said.

Looking forward, Paul Thiers, an associate professor in the School of Politics, Philosophy and Public Affairs at Washington State University Vancouver, said “no energy company in the world would look now at the Pacific Northwest as a place that it’s easy pro forma to get a permit.”

“If you have local activists, regional activists, state government and legislators and now even the national government all not terribly supportive, then these permits are much more difficult to get,” he said.

Despite the permitting difficulties and concerns over the state’s reputation, Sprague said the CEDC’s lineup “is really pretty full,” with more than $2 billion worth of potential projects in the hopper.

“My message to folks, which I think gets lost sometimes, is that in the economic development world we’re not against permitting, we’re not against regulation,” Sprague said. “We want certainty through the process. That’s our main thing.”

New City of Longview Director of Community Development Ann Rivers said she plans to bring forward projects that have a good chance of getting the state’s and the governor’s support, that also fit well in the community and that have long-term potential.

“I’m not going to put forward a project I think the governor will kill,” she said.

From a City Council perspective, Longview Mayor MaryAlice Wallis said projects like Millennium Bulk Terminals mean a larger tax base and “more dollars for our community in so many ways.”

“We see family wage jobs, the economic growth, and the other projects that stem from it,” she said. “We see all of our building trades getting back to work in our community. So we get very excited when we hear about projects like that, but as we’ve seen, project after project has come to the community and had to pack their bags and walk out. It’s so defeating.”

The high level of state regulation is “a blessing and a curse,” Wallis said, as the needs of the environment and the economy are balanced.

Local environmentalist Sandra Davis said the “past eagerness by our local officials to approve fossil fuel projects could have tainted our area through industrial pollution lasting 30 to 40 years, as well as the added costs of cleanup afterwards.”

“We have to stop this idea of fouling our own nest, so to speak,” she said. “If we don’t get a handle on climate change now, it will eventually bankrupt our communities.”

The global energy market itself is changing, Thiers said. Demand for fossil fuels in Asia, which had always been assumed to be infinite or always growing, is starting to slip.

“You can look at oil prices, but also demand in Asia and see it’s more variable than it used to be, and the regulatory environment for burning coal is much less easy than it was in East Asia some years ago,” Thiers said.

There also is a growing demand for green or clean energy and manufacturing, though the line of what is green and what isn’t is not always clear.

Natural gas, for example, was once touted “the gold standard” of clean options, Rivers said, but “now some have decided it’s a fossil fuel.”

A timeline of industrial projects in Cowlitz County

Rivers said she’s exploring how the state would classify different kinds of natural gas production, like gas made from biomass, “waste that would otherwise go to a landfill,” instead of fracked natural gas.

Some green hydrogen producers have expressed interest in Longview, though nothing has been officially proposed, Rivers said. Cross-laminated timber, which she saw when she visited Sweden, could also work here, she said.

“I don’t think the solution is to punish businesses the governor might call the ‘dirty 30,’ ” she said. Rather, the solution is to do things now that can help, like making and buying more fully local products to avoid shipping items in from elsewhere, or planting more trees in city medians and right of ways.

Setting up ways for businesses to co-locate and create “industrial symbiosis” with each other is also one of Rivers’ visions for the future.

An example is a business park in Scappoose that supports innovation by having a research and development arm, an education arm, a test manufacturing arm and a workforce development arm all working together, she said.

When projects come to the City Council, Longview Mayor Wallis said the council evaluates if it’s a good choice for the city and if there will be community buy-in. While a shipping company like Google or Amazon might find the area attractive, she said warehouses are a stronger bet, as well as a broader mix of big and small operations.

“We’re going to look a little different than we were back in the ’80s when this was a mill town and we relied on all those mills working 24/7 to put food on our tables,” Wallis said.

And while the council is focused on fostering the growing number of small businesses and city construction jobs, Wallis said Longview will need more than that to sustain itself.

“We definitely need to have good relationships with the big stakeholders,” she said.

Dick said she’d like to see local civic leaders focus on cleaning up the old Reynolds Aluminum site and getting new companies on it, as it’s already been used as industrial land and could be a “job producer.”

“Why go and take green good land and turn it into waste?” she said. “Let’s use what we’ve got.”

She and others “will continue to oppose any project that would degrade the river any further,” Dick said. She’s also wary of companies that “greenwash” their projects, giving environmentally damaging industries an eco-friendly spin.

“People out there will greenwash their project and actions. We know that,” she said. “We know that the natural gas industry is putting a push out there to say they’re cleaner than the rest, but it’s a fossil fuel.”

“I think we need to be smarter about these people coming to town and what they want from us,” Dick said.

Port of Kalama Executive Director Mark Wilson said the port’s million dollar question is which projects will get permits.

“How fair are we going to get treated when we try to bring another project forward? There’s a lot of concern around that,” Wilson said. “We have a lot of internal conversations about what we can do on that site.”

While energy companies are attractive to tenants because of constant demand for energy, Wilson said that’s never been an area the port targeted. The canceled methanol plant was to be used for plastic production, and the port’s preference always has been manufacturing and bulk goods export.

Manufacturing, especially with import and export aspects, tends to be more lucrative for the port and the community, he said.

“There’s job creation, the revenue component and typically manufacturers generate more of a tax base and have a higher investment from the private sector,” Wilson said. “That funds the schools and fire districts and all of those things.”

Environmentalist Davis said Cowlitz County has “many selling points,” including the airport, Lower Columbia College, a conference center, deep water ports, rail and easy access to I-5, a large trained labor force, the hospital and a more affordable cost of living than Portland or Seattle. A distribution center like Amazon, UPS or FedEx, or a Costco, could be good options, she said.

“We need to start selling what we have to offer,” she said. “Clean, sustainable manufacturing possibilities are limitless.”

GreenWood Resources staff surveyed about 17,000 acres by foot and sound that a quarter of those acres showed at least 40% trees had moderate to severe damage. Half of those were between one and three years old, so staff are now surveying every area with young trees to get more precise information.

All three location in Cowlitz County fall well below what the EPA considers high risk. 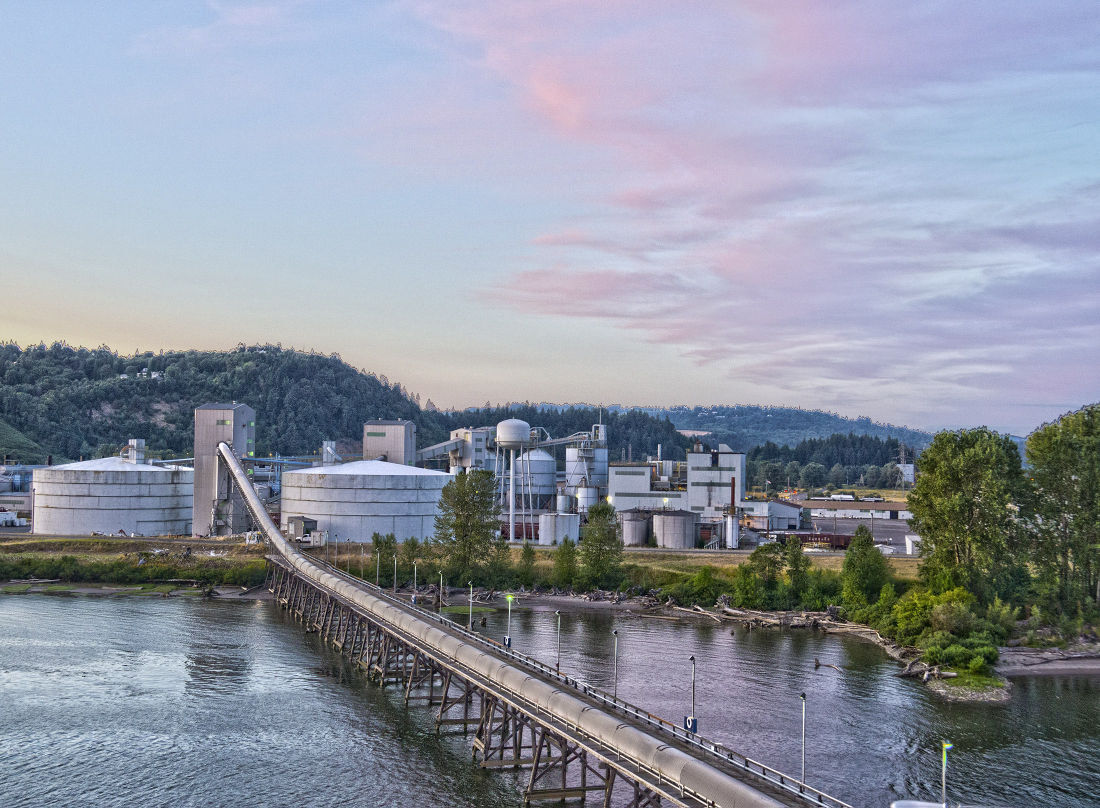 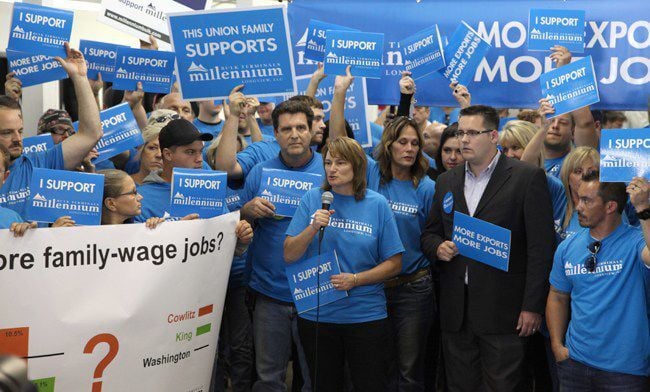 Jeff Washburn, fifth from the left, holds a sign supporting Millennium Bulk Terminals at a rally in 2020. Washburn, a former head of the Kelso-Longview Building Trades Council and Cowlitz-Wahkiakum Central Labor Council, helped negotiate a contract with the company to use local labor to build the $680 million coal terminal proposed for Longview. 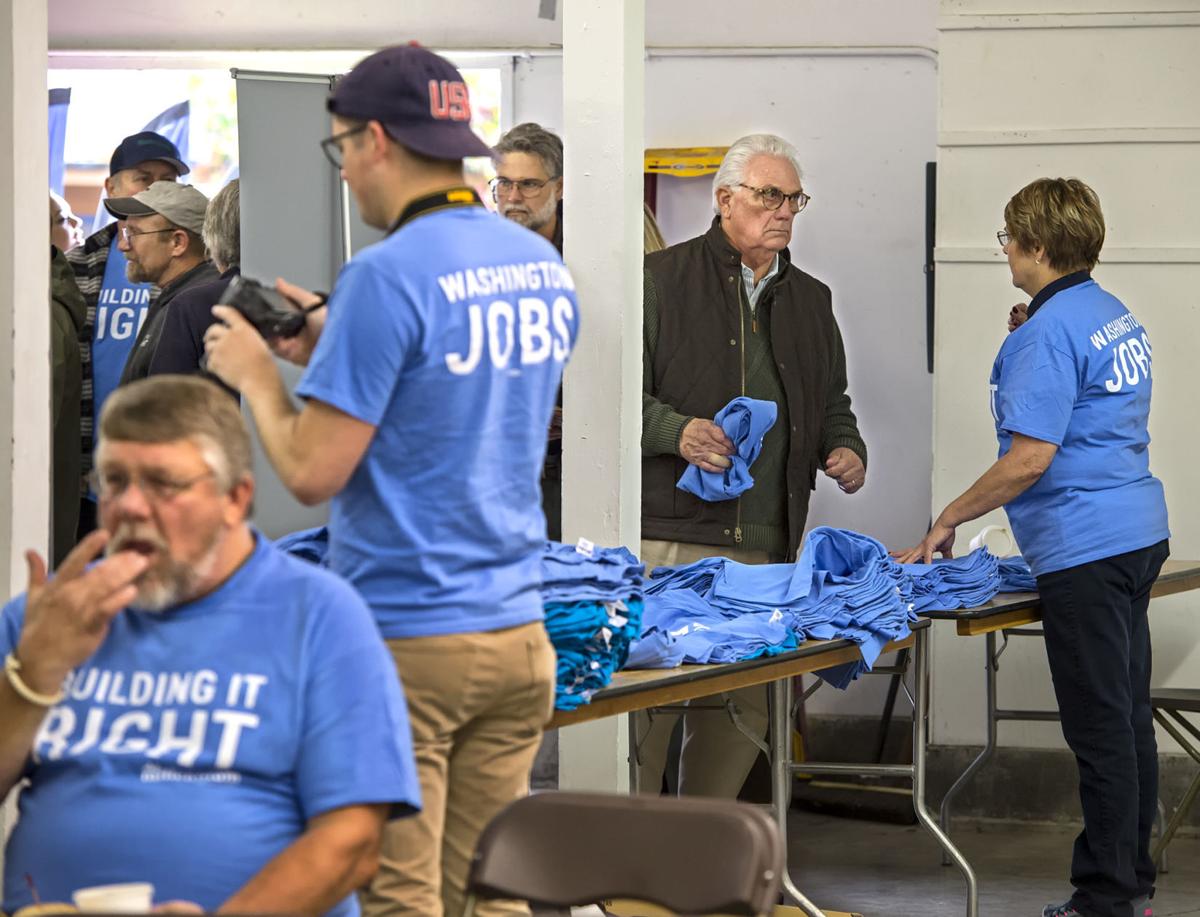 Bruce Pollack of Kalama, right center, gets his blue T-shirt and some information from Millennium’s Gena Ramey, right, at the start of the Millennium lunch break during the first day of the shoreline permits hearings at the Cowlitz County Expo Center in 2017. 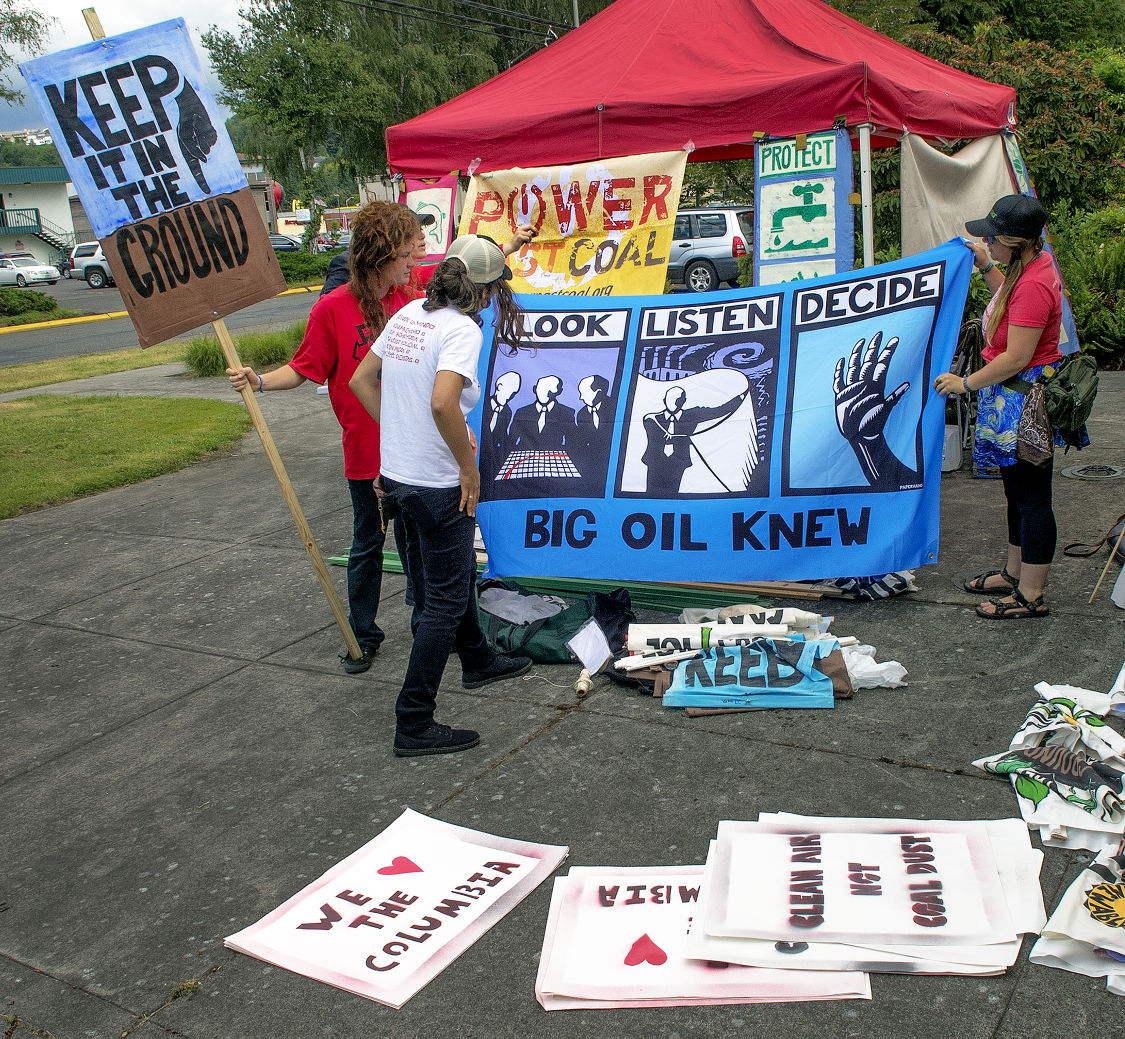 Coal terminal opponents prepare signs at a public hearing in 2016 in Longview.