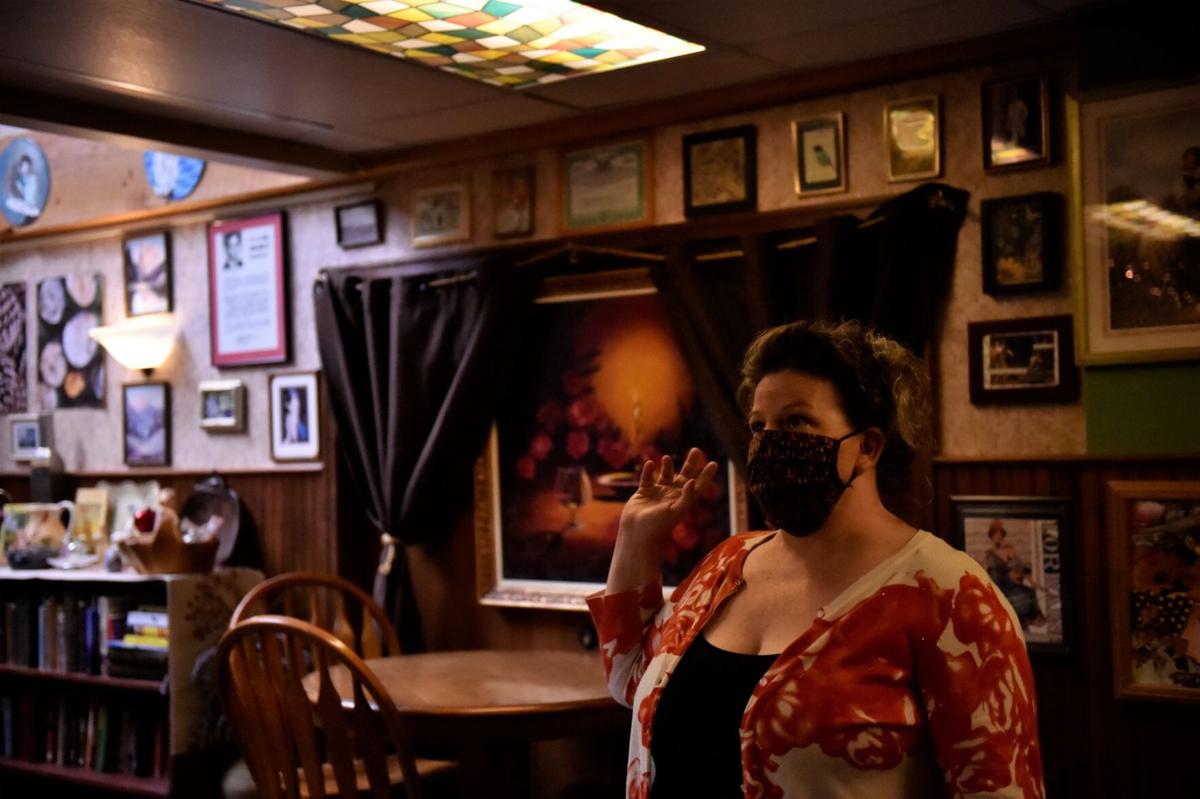 Andrea Horton shows the new decorations Gyros Gyros has acquired over the last 18 months. The restaurant has been closed since the beginning of the COVID-19 pandemic. 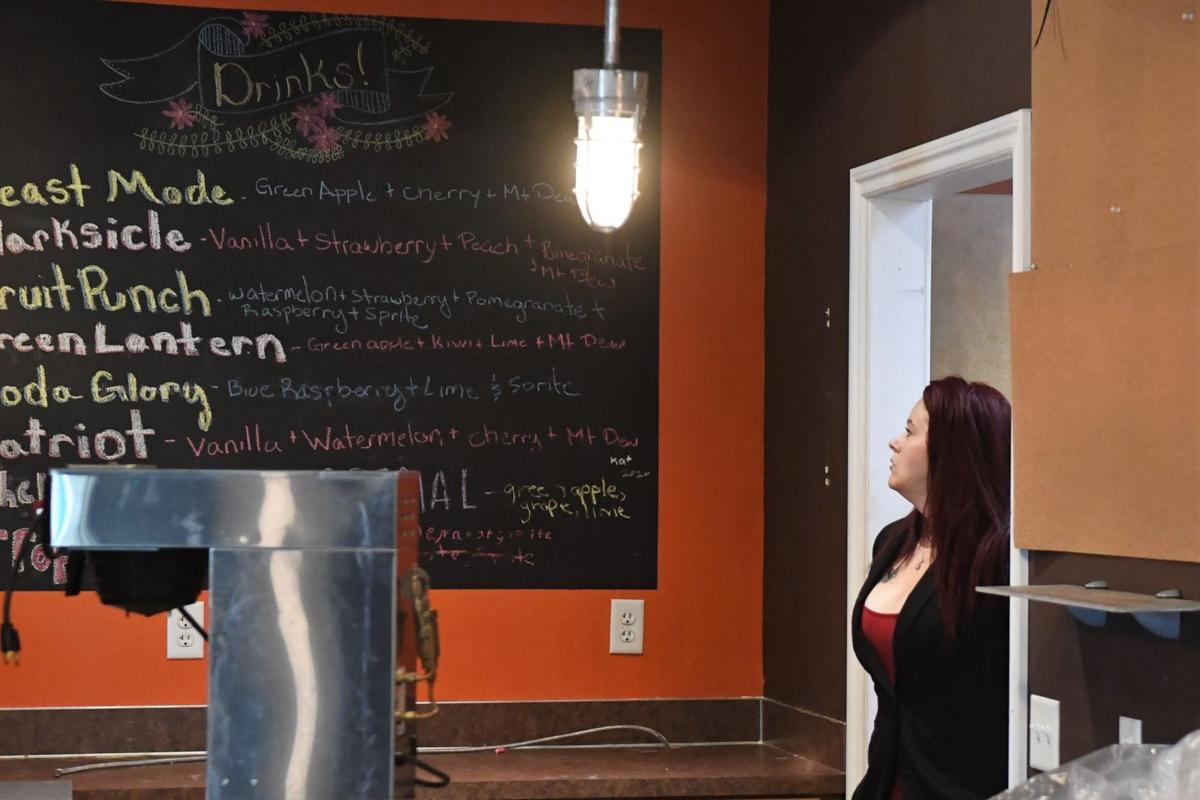 Danielle Rowley looks over a chalkboard of drink options left over from Father's House. The church's upstairs youth areas will be turned into event spaces as Old Creekside Cafe continues to renovate. 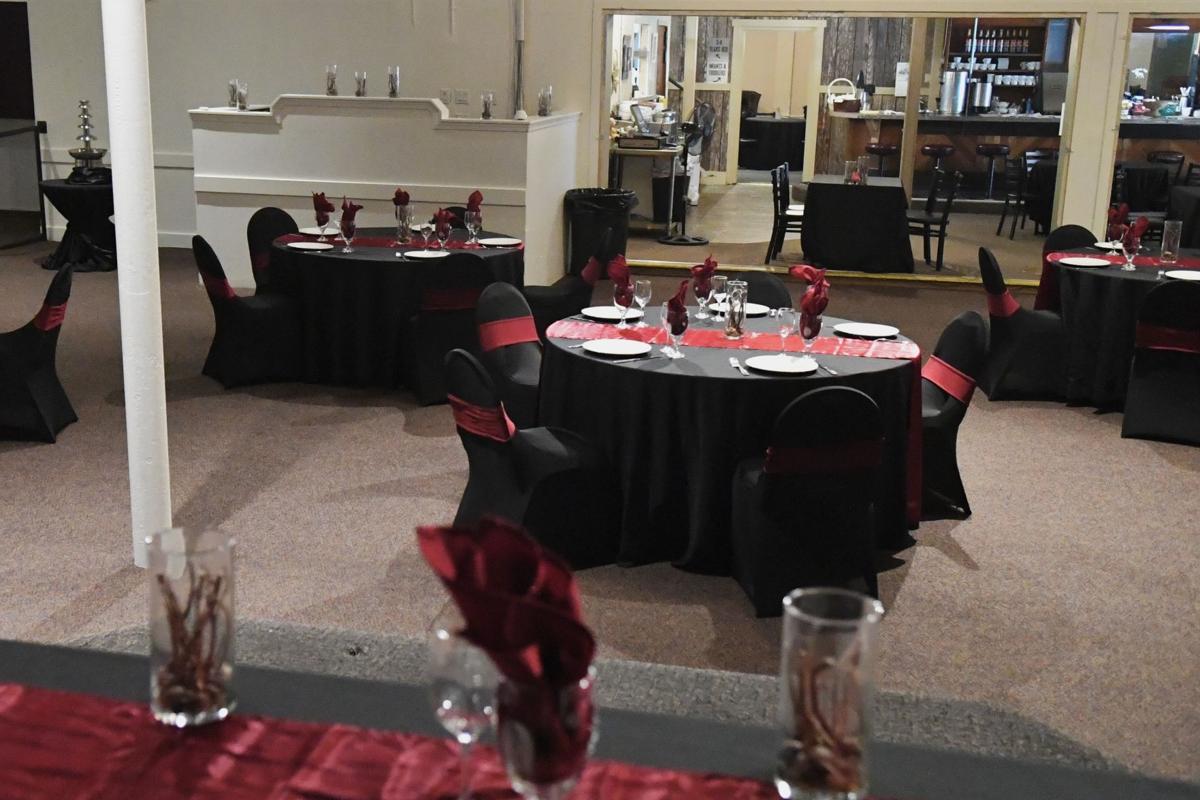 A view of the event ballroom and main restaurant area at Old Creekside Cafe on Sept. 1.

On opposite sides of Commerce Avenue sit two restaurants, each with a chalkboard that has become a reminder of what used to be.

A menu of non-alcoholic tropical drinks sits in a large room above the Old Creekside Cafe. Until a few months ago the room had been a youth-friendly section of Father’s House Church.

The cafe underneath went through two leadership changes last summer and current owner Danielle Rowley courted controversy when she opened for dine-in meals during the winter. In May, Rowley bought the church’s section of the building and temporarily closed the restaurant while she worked to expand it into a local event center that should open by the end of September.

The sign in Gyros Gyros has been unchanged for even longer. The chalkboard there still carries a large ad for “The Trojan Women,” a Stageworks Northwest play owner Andrea Horton appeared in.

The play ended its run on March 8, 2020. The Hortons closed the doors of their restaurant days later, right as COVID-19 became the dominating story in Washington, and have declined to reopen them ever since. Not with mask requirements, not with limited seating, not with take-out meals.

The paths Gyros Gyros and the Creekside Cafe took through the pandemic led to different sets of challenges. Both owners hope that customers will be excited to return when they do reopen their doors.

‘I hate that this room is empty’

The Hortons were running two Gyros Gyros locations, including one at the Three Rivers Mall, when the 2008 financial crisis began. Andrea said one strategy for getting out of debt in the years following the recession was learning to live on $20,000 a year.

“We had just gotten out of debt when this happened,” Andrea said, citing COVID during an interview at the restaurant in August.

The Hortons moved their business to Commerce Avenue in 2013. At various points, the underground eatery has operated as Gyros Gyros and Bower’s Down, which focused heavily on farm-to-table meals.

The cozy enclosed nature of the space ended up becoming one of the reasons the Hortons chose to remain closed throughout the course of the pandemic. They also carried a lot of concern about customers putting themselves at risk of infection for a falafel and berry tea and felt take-out meals were inferior to fresh restaurant courses.

“There is no amount of money I could have made where I would feel good about letting a customer get sick here,” Horton said.

For the last 18 months the family has existed off their savings, Chris’ unemployment filing and a $10,000 federal loan for PPP (Paycheck Protection Program). They stopped by the restaurant regularly to make sure the equipment stayed in working order, which let them catch an issue with their refrigerator earlier this year. A lot of energy went into their family farm, which once supplied fresh organic ingredients for the restaurants.

Earlier this summer the Hortons began working toward a potential Labor Day reopening. They redesigned several aspects of the decorations, replacing album covers with thrift sale artwork or sculptures Chris made. There was a private dinner in June for Andrea’s birthday and discussions of other private meals leading up to a reopening.

August’s spike in COVID cases led them to abandon that plan. The Hortons think their savings can allow them to stay closed through the end of the year without going back into debt. If case numbers still are elevated and the county vaccine rate doesn’t increase, the future becomes much blurrier.

“We can think of other ways to make money, but right now I want to go back to making gyros,” Chris Horton said.

Andrea said she’s not trying to evangelize or say all restaurants should be following her lead. She knows several other local business owners and hopes they’re just able to find a way through the pandemic’s challenges.

“If I stay out of the pool, then I’m not competing with restaurants that feel safer opening,” Horton said. “I assume they made the best decision that they can make for themselves.”

New plans for an old building

She purchased the restaurant from Paige Espinoza, who owns the neighboring Country Folks Deli. Espinoza ran the restaurant for two months before the challenges of running two eateries at the same time during COVID became overwhelming.

Rowley said the plan to eventually expand the cafe into a full event center always had been on her mind. She saw the need for a mid-size location to host community events — a location smaller than the Expo Center, but with the capabilities to feed up to a few hundred people at once. Rowley said she also wants to keep the restaurant’s original welcoming nature.

“I want it to be a place where people can come by after work to have a drink and some small bites, maybe bring a date. But it will also be a family area,” Rowley said.

The rooms on either side of the cafe’s original booths and counter have been turned into fancier banquet areas. The menu will feature some of the original food along with an expanded menu including pasta, Sunday brunches, small plate appetizers and smoked cocktails.

Those drinks have become the last hurdle to reopening the restaurant. Creekside’s status as a leased property of the Father’s House Church meant they were unable to hold a liquor license. Rowley blamed that as one of the issues that challenged the restaurant during its attempts to reopen. She recently completed the final paperwork to receive a liquor license and hopes to hear back within two weeks.

Her catering business in Kalama has stayed open this summer, where Rowley dealt with the same issues of short-staffing and strained production lines many other Washington restaurants have reported.

“It’s getting slightly scary,” Rowley said. “It took me almost the entire day to stock up on supplies because I had to go to so many different stores because of shortages.”

Creekside Cafe was fined $67,000 by the Department of Labor & Industries in February for offering indoor dining services . Rowley and an L&I spokeswoman said the cases still are pending as Rowley works with an attorney to appeal the penalties.

Rowley said she understood that the state needed to follow the letter of the law but defended the opening, saying it was the only way to keep the business long-term. She questioned whether restaurants and bars were inherently more risky settings than other businesses that did not have capacity limits and said she has no plans to buck the mask mandate when the restaurant reopens.

“We never had a problem with the mask mandate before. I followed every other protocol that was in place,” Rowley said.

Cowlitz County’s grocery stores are seeing higher nationwide sales than before the pandemic despite rising inflation.

The Port of Woodland Commission agreed to sell about 11 acres of the Schurman Way Industrial Park to Peri Formworks.

Port staff will work with legal counsel and the advisory board to create a draft policy for the commission to review at a later meeting.

The commission also on Tuesday approved renting space to Last Mile LLC, a telecommunications equipment supplier currently based in Longview.

A new company is taking flight at Kelso’s airport as aircraft traffic at the regional facility is growing.

Andrea Horton shows the new decorations Gyros Gyros has acquired over the last 18 months. The restaurant has been closed since the beginning of the COVID-19 pandemic.

Danielle Rowley looks over a chalkboard of drink options left over from Father's House. The church's upstairs youth areas will be turned into event spaces as Old Creekside Cafe continues to renovate.

A view of the event ballroom and main restaurant area at Old Creekside Cafe on Sept. 1.