In the big picture, Longview and Cowlitz County have bounced back from the economic strains created by the pandemic. The unemployment rate is lower than it had been before COVID-19 and the total number of jobs is higher in some measures.

But are the jobs available appealing for the workers long-term? What does it mean to offer a high-quality job?

The Columbia-Willamette Workforce Collaborative is trying to answer that question for businesses across southwest Washington and northern Oregon through the Quality Jobs Initiative. The workforce board is a team-up among three nonprofit labor agencies: Workforce SW Washington, Worksystems and the Clackamas Workforce Partnership.

The agencies began meeting with a council of business leaders from the region in August to determine what job aspects are the most important for a quality experience. Those ideas and goals will be turned into a framework that will be released early next year for local businesses to use as inspiration.

One of the business representatives on the council is Bob Gustainis, the regional district manager for Walgreens in southwest Washington. Gustainis said the final rubric that comes out of the report should work for local businesses as well as companies like Walgreens that can only change so much at the local level.

Gustainis said inclusivity is going to be the major policy he plans to work on with his store managers. He hopes that actively trying to create a better work environment will make it easier to retain workers for the lower-paying, less skilled positions.

“If everyone is leaving for fast food pay rates, then why is Jimmy staying for 10 years? Do you talk differently to Jimmy? Do you treat him differently than the rookies you have been working with?” Gustainis said.

Scott Bailey, the department’s regional economist for southwest Washington, said the unemployment numbers don’t tell the whole story. People who have stopped looking for jobs are not counted as unemployed.

“Some people are not going back to work, either because of COVID worries or child care or kids are bouncing in and out of schools,” Bailey said.

He prefers to use the total number of jobs as a measure of local economic strength, which is similarly strong for the region. Preliminary numbers from the Bureau of Labor Statistics show the Longview area had around 41,300 total jobs in November. The highest that number reached in the years leading up to the pandemic was 41,100 employees.

While the recent numbers seem positive, Bailey warned against using them to assume how the labor market will look in 2022.

“All bets are off on forecasting. You tell me what omicron is going to do, or what is next in the Greek alphabet,” Bailey said.

One issue that came up as part of the Quality Jobs Initiative is the availability of child care.

“It used to be a few years ago, folks had a hard time drawing the line between child care and work development,” Hoffman said.

Workforce SW Washington put together a report in December 2020 about the importance of child care options for businesses. Employers from dozens of Cowlitz County businesses were interviewed about how their workers were impacted.

The report found 18% of the total workforce at the companies interviewed ran into child care barriers at some point. Just over half of the businesses said child care was a substantial problem for at least one employee.

Shift workers were four times more likely to have struggled with child care between 2018 and 2020. Given the prevalence of shift work in manufacturing and health care, two of Cowlitz County’s major industries, Hoffman said businesses should know the impacts the issue will have when hiring.

“They may be working 12-hour shifts or working graveyard shifts and if child care isn’t already challenging enough, that adds a whole new layer to it,” Hoffman said.

Workforce SW Washington is addressing child care concerns outside of the quality jobs program. The Workforce Collaborative received $2.3 million from the U.S. Department of Labor in December to help cover child care costs for job seekers. Workforce’s share comes to $183,000 to help cover the costs for a few dozen people getting into new jobs across southwest Washington.

In addition, Hoffman said the group is working on a larger public-private partnership in Cowlitz County that would further help with childcare. Hoffman said the project doesn’t yet have the “critical mass at the table” to release official details.

Have you ever wondered what happens to a Milk Dud when you take out all the water?

The pro shop store is the first of what the company hopes will be multiple locations across the United States.

This will be the third McMenamins building at the port.

Final approval will be discussed in January 2023.

The family-owned cleaning business is celebrating its first year.

New 'invisible fiber' will change the way we eat food

New 'invisible fiber' will change the way we eat food

A masked construction worker in May 2020 carries supplies into a project site on City View Boulevard in Longview. 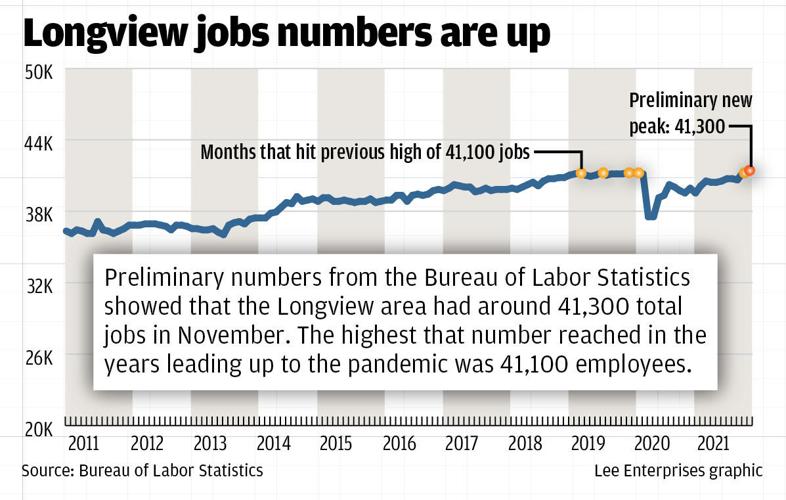 The total nonfarm employees working in the Longview metro area