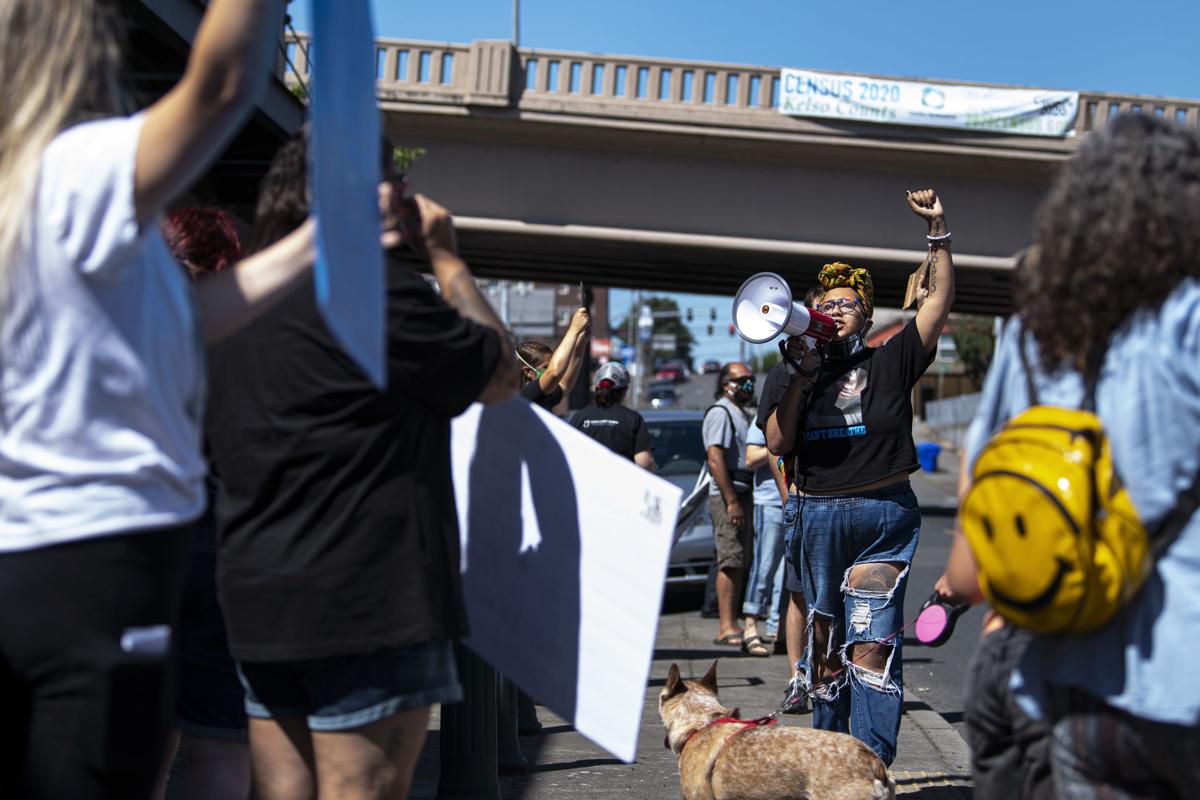 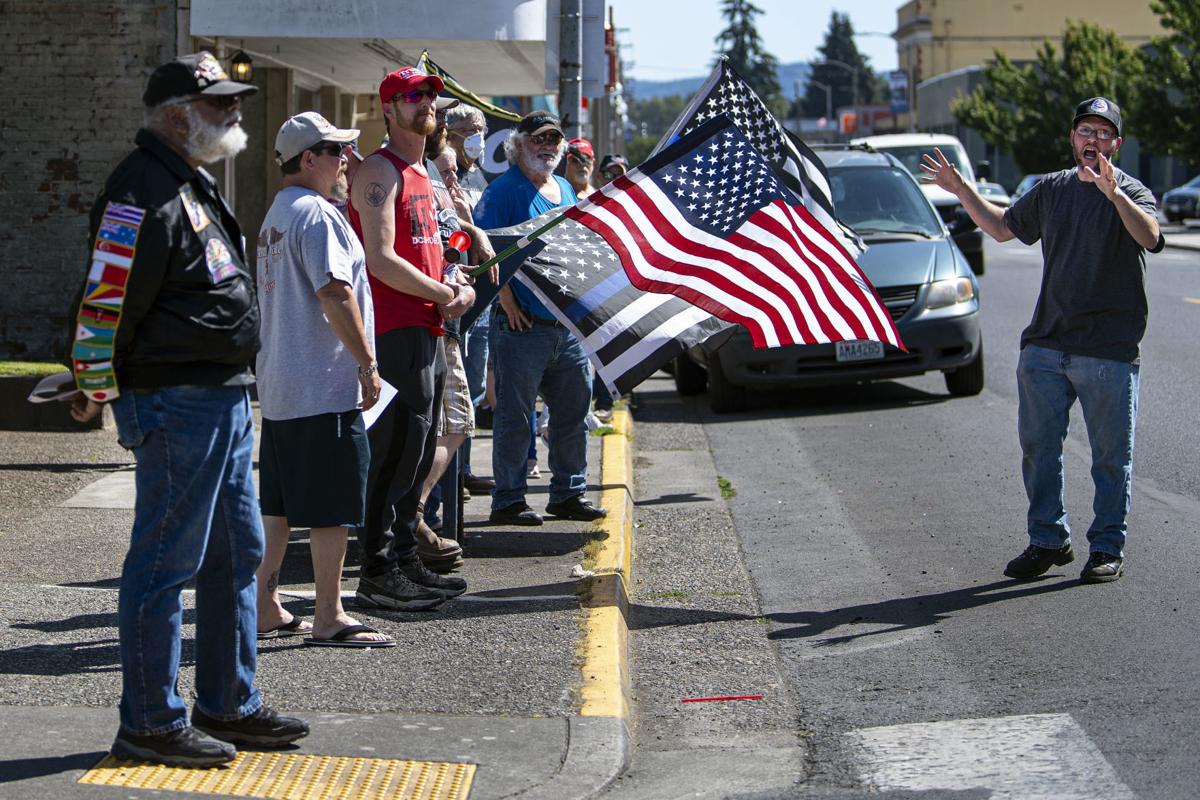 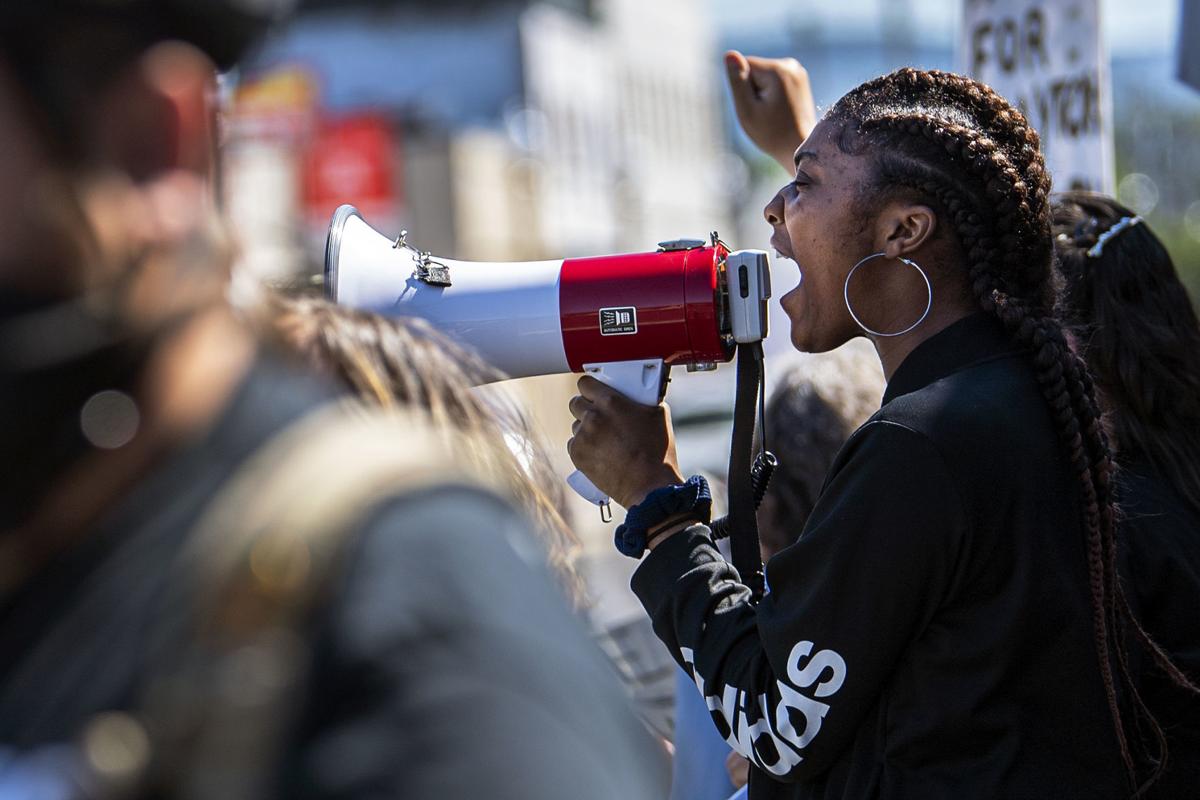 A Black Lives Matter protest outside of the Kelso City Hall Monday was met with a vigorous counter-demonstration, but the tense encounter ended without incident.

The Black Lives Matter protest was led by Lexi Bongiorno, president of the Southwest Washington Communities United for Change. She said the group, which has been active in both counties for three years, is organizing a week of protests in Cowlitz County after holding similar protests in Vancouver. They have a Kelso office, she said.

The group had three main demands, she said: Defund the police, demilitarize the police and invest those funds into communities of color.

She said the police and court systems were founded on slavery and racism, and “until the system is taken down and rebuilt we won’t have equality.”

While the protest was slated to last from 3 p.m. to 7 p.m., Bongiorno decided to cut it down to an hour due to the county’s recent the spike in COVID-19 cases. The majority of people participating on the Black Lives Matter side were masked, and Bongiorno asked everyone to stay socially distant.

“We want to center our Black and brown community voices” while respecting their health, she said, because health data shows that Black and Latino people are disproportionately affected by COVID-19.

As Bongiorno spoke to the crowd, she was at times drowned out by the revving of motorcycle engines and car alarms.

Nyssa, a Black local resident at the protest, said she had been to protests in Toutle, Centralia and Morton but had not seen a counter-protest like Kelso’s before.

Normally, Nyssa said, people would drive by and yell things, but counter-protesters surrounding the Kelso war memorial brandished American flags and responded to chants of “Black lives matter” with “all lives matter” and “blue lives matter.”

“It’s important for us to speak out because those who have died can’t speak,” Nyssa said. “This could happen to us any day, any time.”

Kelso police officers did walk through both groups several times, and kept counter-protestors out of the street on one occasion.

According to a Facebook post on the department’s page from Kelso Police Chief Darr Kirk, the agency was prepared for the demonstrations, which will continue Tuesday.

“We have been in contact with event organizers and believe this will be a small group,” Kirk said. “The organizers have been professional and collaborative and we do not anticipate any public safety issues. The Kelso Police Department respects everyone’s rights to free speech and want to provide a safe environment for our citizens.”

Kelso resident John Phelps was in the counter-demonstration group and said he showed up to protect the war memorial.

“That was my original plan,” he said, but instead he tried to keep the counter-protesters peaceful. He told one aggressive demonstrator to leave the group and warned another that if he didn’t stop shouting racist things he would have to leave.

“I went over to talk to the organizer (Bongiorno) to let her know that I would keep this side peaceful,” he said. “Peace of mind can do a lot.”

He said while he didn’t support the Black Lives Matter group or defunding the police, he did believe in equality. He said he just had a different idea of how to get there.

Kelso residents Russell Schultz and his sister Michelle Schultz, members of the right wing group Patriot Prayer, said they came to make sure nobody on either side got hurt.

While Russell Schultz said he opposed BLM, calling it a Marxist organization, everybody should be able to speak their mind and he didn’t like how aggressive some counter-protesters were getting.

He repeatedly told other counter protesters that Black lives did matter and to calm down. The best way to do this, he said, was to let each side say something and go back and forth verbally only.

“The political message can be fought, but the humanitarian message should not be fought,” he said.