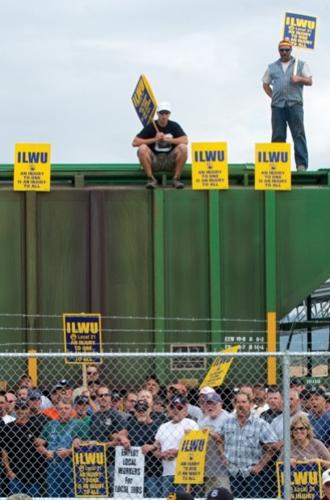 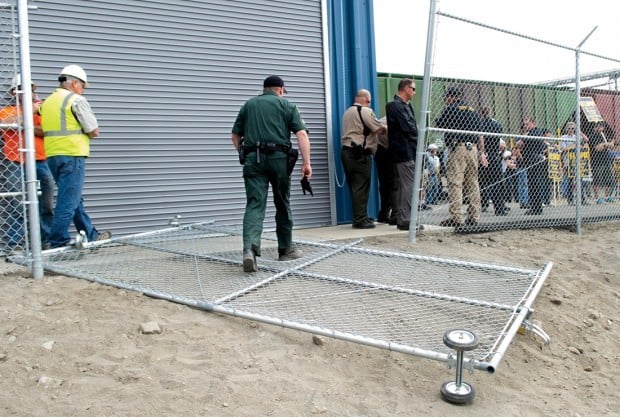 The vote was unanimous to sue RSG to obtain the vacant land through eminent domain, but the commissioners took a lot of heat for choosing an out-of-state grain company, EGT Development, over Kalama-based RSG.

On the other side, the commissioners’ biggest supporters? International Longshore and Warehouse Union Local 21 members, who were excited at the promise of 50 new union jobs handling grain at the EGT facility.

This summer, the highly anticipated grain terminal is nearly complete. But the partnership among the union, the port and EGT has all but disintegrated.

The port has a contract with ILWU local 21 to hire union labor for all longshore work at the EGT site. EGT has sued the port to force non-union labor into the terminal. ILWU leaders have unleashed some of the most forceful labor demonstrations to hit Longview in decades to claim what they say are rightfully their jobs.

"I think everybody is having second thoughts now. They never thought it would turn out like this," Port Commissioner Dan Buell said last week.

Along the West Coast, labor leaders are closely watching the dispute, fearful that an EGT victory could embolden grain companies at other ports to challenge the union. The Stand, the Washington State Labor Council’s weekly newsletter, called the protest "one of the more militant union campaigns in decades." In June, nearly 1,000 ILWU protesters from Washington to California rallied in front of EGT’s corporate offices in downtown Portland.

The Port of Longview is caught right in the middle, Buell said.

"If the ILWU loses, that’s a big loss. That just starts the ball rolling for other ports. They’ve got to stay strong and prevail. And I’m sure (EGT parent company) Bunge would like to make this a test case," added Buell, a former union electrician and labor council president.

The standoff is being observed by Pacific Maritime Association, who will negotiate new ILWU labor contract coastwide in 2014. The stakes are huge, but a spokeswoman for the association, which represents the vast majority of shippers on the West Coast, declined to comment.

History of labor peace in Longview

Historically, Longview-based Local 21 has been among the least militant groups within the ILWU, said Ron Magden, a retired Tacoma Community College professor who has written several books on the history of unions on the West Coast waterfront.

When Local 21 dock workers, who operate at the port of Longview and Kalama, have protested, they usually were supporting other ILWU actions, Magden said.

In 2008, Local 21 members participated in a one-day walkout held coast-wide to protest the Iraq war. Local 21 members were also among the thousands of dock workers locked out by the Bush administration during 2002 contract negotiations with the Pacific Maritime Association.

However, Longview has never been ground zero for a labor fight, Magden said.

"It’s most unusual that Longview would be thrust into the limelight," he said.

However, the conditions are ripe for labor strife because the stakes are so high, Magden said. Chinese demand for grain is high, the fall harvest is near, and the current dispute will likely become a "bellwether" for future contract talks for grain companies, he said.

EGT is "thumbing their noses at local labor, saying, ‘We don’t need to have any part of you,’ " Johnson said.

"The ILWU has a long, proud history, and they don’t want to see standards erode at the port."

The ILWU traces its roots back to 1934, when a bloody, 83-day strike shut down ports along the West Coast and ended in a union victory. In the middle of the strike on July 5, a day known as "Bloody Thursday," five picketers were killed in San Francisco. During the past week’s demonstrations, several protesters wore shirts to memorialize that day.

Since then, the ILWU has fought for safer working conditions and better pay for members, growing into the West Coast’s most powerful union with the ability to shut down millions of dollars of commerce, Magden said.

This week, the simmering dispute in Longview, which began about three months ago when EGT broke off contract talks, finally reached its boiling point. Nearly 100 ILWU protesters were cited and released Monday for criminal trespassing after they tore down an EGT fence and blocked company workers from handling grain during the testing phase.

In January, EGT sued the Port of Longview in federal court, arguing that the company was not bound by the port’s contract with ILWU local 21 to hire union labor for all longshore work on its 38-acre leased site. EGT attorneys said union labor would increase their annual costs of operating the elevator by $1 million.

In a response filed July 5, Port of Longview attorneys asked a federal judge to order EGT to honor its lease agreement and hire Local 21 labor. During two years of negotiations, EGT tried at least twice to get out of that requirement but ultimately agreed with it, port attorneys argued.

The case isn’t expected to be decided until next year, but the conflict could continue to fester if EGT holds to its plan to hire non-union labor when it opens the terminal this summer or early fall.

Over the past week, law-enforcement agencies have incurred dozens of hours of overtime roaming the EGT facility at the east end of the port and responding to the demonstrations, which have largely been peaceful, Cowlitz County Sheriff Mark Nelson said.

Nelson said he has met with both EGT and ILWU officials to attempt to keep the peace, and he understands that longshoremen are fighting for their jobs.

"We felt like things were escalating enough that we were concerned for the safety of the employees, the people who work in that area," he said.

Despite all the protests, the ILWU has not called a formal general strike at the port. Dan Coffman, Local 21 president, said he doesn’t know if it will come to that.

He said he has the support of the ILWU leadership in San Francisco and other locals.

"I know that the brothers all up and down the West Coast are concerned about this."

In Longview, the labor dispute has created a rift between the union and the port, which ILWU members believe gave away too many incentives to attract EGT at the expense of local jobs.

Buell, who is retiring from the port commission after 18 years, said he hopes the two sides can repair their relationship, which has been mostly cooperative for 70 years.

"We really feel caught in the middle. The longshoremen really hate us, hate the commissioners ... probably hate the whole port staff," Buell said.