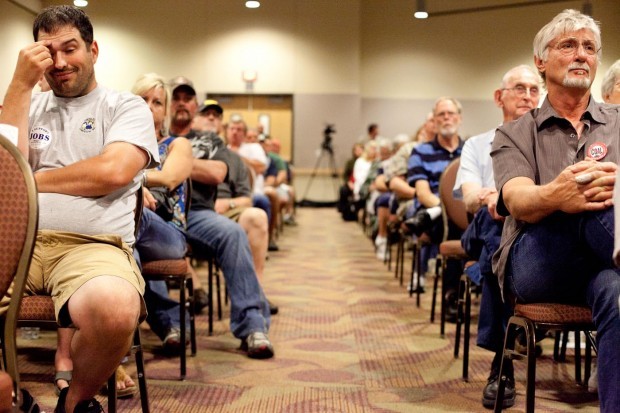 Cary Brister, left, of Kelso and Les Anderson of Longview, right, react during a Thursday forum regarding a coal dock proposed for the former Reynolds aluminum smelter site. Anderson is against the coal terminal, while Brister, a longshoreman, is for it. 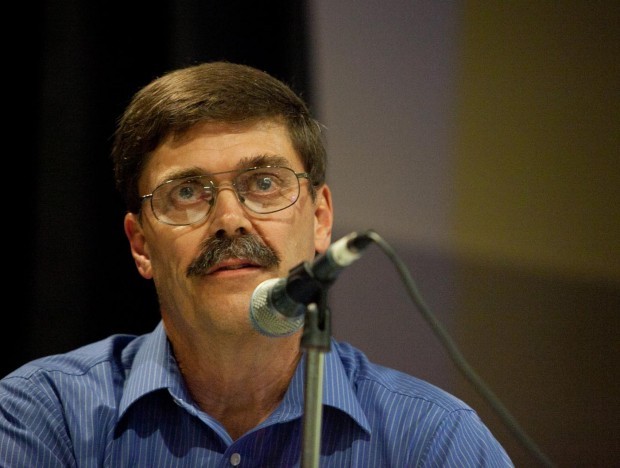 The 30-second video showed a train tipping thousands of tons of coal at a station, while a series of hoses sprayed water to tamp down dust. It's the same system that Millennium Bulk Terminals will use at its proposed West Longview coal terminal to limit air pollution from coal dust, Ken Miller, the company's CEO, told about 300 people at the Cowlitz Expo Center on Thursday night.

However, opponents of the terminal countered that's not good enough.

Millennium, which already has a credibility problem, will never be able to prevent coal dust from wafting from the giant piles, opponents contend.

"Coal dust is a problem at every coal terminal in the country. We just figure there isn't any way they can control all of it," said Dan Serres, conservation director for Portland-based Columbia Riverkeeper.

Promises and credibility were at the core of contention about the proposed terminal, which was the subject of a League of Women Voters forum that lasted nearly two hours.

Dozens of Millennium supporters, including many union members, wore stickers that read "I Support Jobs." Opponents of the terminal, which included some residents who live in the neighborhood of the proposed facility, sported red buttons with the word "Coal" crossed out.

Despite the heated debate that has taken place over the plant for most of the year, the forum remained civil.

He was referring to revelations that documents released this spring revealed that Millennium's parent company discussed plans to expand the terminal to up to 60 tons — 12 times larger than the amount permitted by Cowlitz County commissioners. Amidst public outcry, Millennium withdrew its permit application but plans to resubmit next year.

A larger terminal could also cause a traffic headache in Longview for drivers waiting at Industrial Way and Third Avenue for mile-long coal trains to pass, Serres said. Millennium officials said they are working with local government and rail officials to expand rail lines to relieve congestion.

Millennium bought the building and equipment on the site this spring from Chinook Ventures for $10.9 million. The land itself is owned by Pennsylvania-based Alcoa, which is developing a cleanup plan for soil and groundwater contamination from decades of aluminum smelting by Reynolds.

Millennium is leading the cleanup effort, though environmentalists say Alcoa should hire a cleanup company and not a coal firm. Miller said the cleanup takes priority.

"We let our actions speak for us. We have an obligation for cleanup, and that's going to happen," Miller said.

He added that the company would hire locally to build and operate the terminal.

"It is our intent to hire local workers and local contractors to build this facility," Miller said.

Millennium Bulk Materials will pay a $50,000 penalty, remove a large pile of petcoke and limit its handling of coal at its West Longview site …

The Cowlitz County League of Women Voters is holding a public forum about a proposed coal terminal in West Longview from 7 p.m. to 9 p.m. Thur…

Joe Cannon has stepped down as corporate executive officer of Millennium Bulk Terminals, and the company has hired a Wyoming coal company engi…

Vancouver and Longview citizens groups announced Tuesday they will sue the owner of a proposed coal dock in West Longview, contending that Mil…

Alcoa Inc. will submit a clean-up plan for soil and groundwater contamination at the former Reynolds aluminum smelter site in West Longview ea…

State Ecology officials said this week that Alcoa Corp. will finish writing a cleanup plan for the former Reynolds smelter site next year, but…

Millennium Bulk Terminals and a subsidiary of Alcoa Corp. are seeking to improve a dock at the former Reynolds Metals Co. site to boost alumin…

Coal companies, including a parent of the company proposing to build a terminal in Longview, are investigating the possibility of building new…

Sparked by last week's industrial fire at the site of a proposed coal terminal, opponents of the plans were back before Cowlitz County commiss…

Millennium focused on cleanup as coal terminal process plays out

When Millennium Bulk Terminals bought the buildings and equipment for $10.9 million at the former Reynolds Metals Co. site in January, company…

Cowlitz County commissioners say they'll hold a forum to let residents have their say about a coal export terminal proposed for West Longview.

Millennium Bulk Terminals is pledging another $100,000 to Cowlitz County to help cover the county's legal costs during its recent coal termina…

Returning to square one, an Australian company is withdrawing its shorelines permit to build a coal export terminal west of Longview and will …

The state's largest business lobbying group has joined the spat over a proposed coal terminal west of Longview, fearing that an unprecedented …

Opponents of a proposed coal export terminal west of Longview will hold an informational meeting from 7 p.m. to 9 p.m. Wednesday at the Cowlit…

No Chinese ownership for Ambre Energy, parent company of Millennium

The two companies both have ties to the international energy business, make millions of dollars per year and pronounce their English names the…

Commissioners: Coal terminal permit out of our hands for now

Despite calls from protestors at a courthouse rally Tuesday morning, Cowlitz County officials said they cannot revoke a permit for a controver…

Millennium eager to cash in on China's demand for coal

Four decades ago, the Westshore coal terminal was born in Western Canada in response to increasing Japanese demand to fuel the emerging nation…

TSAWWASSEN, British Columbia — Mounted with a 200-foot arm, the giant reclaimer stacker at Roberts Bank looks like huge saw blade as it cuts i…

Millennium Bulk Terminals announced Wednesday morning it has completed the purchase of the Chinook Ventures' facilities in Longview, the lates…

The state Department of Ecology has filed to become a party in an appeal of a coal export facility in Cowlitz County, state officials announce…

Riverkeeper leader a hero to friends, obstructionist to foes

HOOD RIVER, Ore. — From his second-story office in an old house here, Brett VandenHeuvel has a fine view of the object of his passion. Last We…

Cowlitz County commissioners will vote at 10 a.m. Tuesday on whether to approve a shoreline permit for an Australia-based company to build a c…

After four hours of testimony Tuesday, Cowlitz County commissioners delayed a decision whether to allow an Australia-based company to build a …

A Utah-based coal company is looking to buy out Chinook Ventures' interest in the former Reynolds Metals aluminum plant, clean it up and turn …

Cleaning up industrial contamination at Longview's former Reynolds Aluminum site is a top priority, and a draft cleanup action plan should be …

The owner of Longview's former Reynolds Metals Co. aluminum making site is assembling an advisory board of community leaders to stay abreast o…

Rainier is wrestling with coal, too.

Regional environmentalists have landed a high-profile voice in their fight against coal terminals in the Pacific Northwest: Robert F. Kennedy Jr.

Cary Brister, left, of Kelso and Les Anderson of Longview, right, react during a Thursday forum regarding a coal dock proposed for the former Reynolds aluminum smelter site. Anderson is against the coal terminal, while Brister, a longshoreman, is for it.