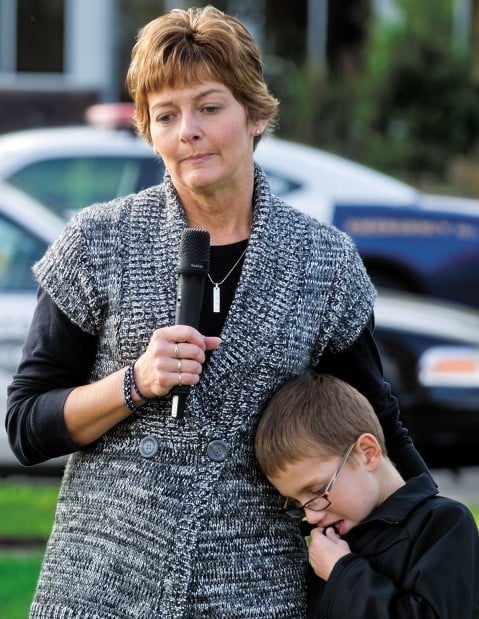 Amy Painter comforts her son Riley on Monday during the dedication of Ralph Painter Memorial Highway honoring her husband, who was killed in the line of duty in January. 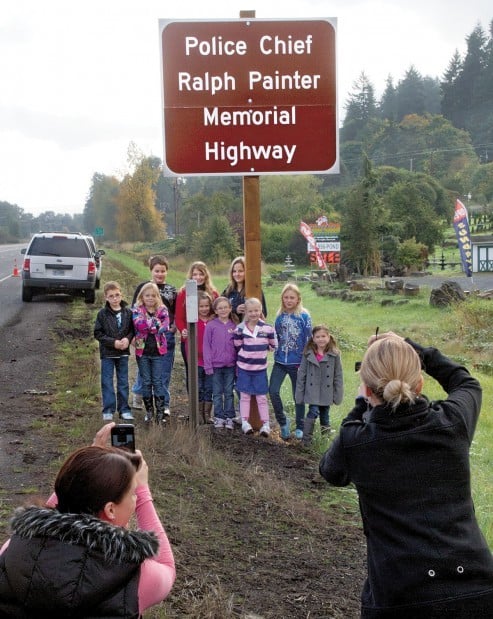 Friends and family of Ralph Painter pose for photos during Monday's dedication ceremony for Ralph Painter Memorial Highway, and 18-mile stretch of Highway 30 in Oregon.

By Marqise Allen / The Daily News

RAINIER — It has been 10 months since Rainier Police Chief Ralph Painter died in the line of duty, but it doesn't seem that long for friends and family.

However, the support from the community in the aftermath of his Jan. 5 death has helped, she said.

On Monday morning the community showed its support again. About 100 people attended a ceremony at Rainier's Riverfront Park dedicating an 18-mile segment of Highway 30 from Rainier to St. Helens as Ralph Painter Memorial Highway.

The Oregon Legislature honored Painter by renaming the highway and installing signs about the designation near the two cities.

"I can't believe it has been 10 months," Rainier Mayor Jerry Cole said. "We've all felt the pain of losing our chief. ... The wounds may heal, but the scars will be there forever, and we'll always remember Ralph Painter."

Painter, 55, was shot after struggling with a suspicious man outside a West Rainier car stereo store. Daniel A. Butts, 21, Kalama is accused of commandeering Painter's gun and shooting the chief. Butts, who has been charged with aggravated murder, is undergoing evaluation to determine whether he's mentally fit to stand trial.

Monday, people spoke of how Painter lived, rather than the tragic way he died.

"You don't know the impact you make until something like that happens," said Longview police Sgt. Doug Kazensky, who responded to the call with Painter.

Residents from Rainier and the surrounding areas, as well as city officials from Longview, Kelso and Clatskanie and members from each city's police department attended the gathering.

"It was nice to see so many law enforcement attend with the community. It's just a testament to how appreciated he was," Kazenksy said.

"Ralph took great pains to make sure everyone was taken care of," said Oregon State Rep. Brad Witt, D-Clatskanie, who co-sponsored the legislation to designate the highway in honor of Painter. "He was a light on a dark night and a great man."

Most who spoke during Monday's ceremony remembered Painter's eagerness to help, tell a joke and to give back.

"He was a normal, everyday person like we are and touched a lot of lives," Amy Painter said. "For everyone driving by the signs, I want you to think about making someone else's day. Tell a joke or make them smile. It's what he would've done."

Sudanese man in NYC unable to talk to family

ST. HELENS, Ore. — Daniel Armaugh Butts' murder trial won't happen until sometime in 2013 — and will be held in another county if his lawyers …

A bill to rename a portion of Highway 30 in honor of Rainier's slain police chief unanimously passed the Oregon House today, taking it one ste…

Oregon measure would rename stretch of Highway 30 after Chief Painter

A bill to rename a portion of Highway 30 in honor of Rainier's slain police chief is wending its way through the Oregon Legislature.

Nearly a year after the fatal shooting of Rainier Police Ralph Painter, his accused murderer is set to go before a judge Wedneday to determine…

ST. HELENS, Ore. — Daniel Armaugh Butts may be anti-social, defiant and selectively mute, but he's not psychotic or mentally ill, a forensic p…

ST. HELENS, Ore. — Daniel Armaugh Butts is mentally ill and it would be almost "impossible" for him to be faking his symptoms, a psychiatrist …

"How are you doing?" It's the question members of the Ralph Painter family get asked over and over again. A year after the chief's death in th…

The man accused of murdering Rainier Police Chief Ralph Painter should find out Tuesday if he's headed to a trial or a state mental hospital.

Another delay has pushed back a decision in the Daniel Armaugh Butts mental competency hearing — likely until next month.

After more than a year's delay, Daniel Armaugh Butts is expected to enter pleas to 24 charges next week in the death of Rainier Police Chief R…

SAINT HELENS, Ore. — The man accused of murdering Rainier Police Chief Ralph Painter pleaded not guilty Wednesday, more than a year after his …

Daniel Butts in court for refusing treatment for head wound

The man awaiting trial in the shooting death of the Rainier police chief was in court Wednesday in St. Helens for refusing treatment for a sel…

A hearing Thursday could determine if the Kalama man accused of murdering Rainier Police Chief Ralph Painter is forcibly medicated. But the Co…

ST. HELENS, Ore. — Daniel Armaugh Butts is going back to the state mental hospital for another evaluation, but for now prosecutors say it won'…

Daniel Armaugh Butts is back in the Columbia County Jail after a second visit to the state mental hospital.

ST. HELENS, Ore. — Daniel Armaugh Butts is mentally impaired and is unfit to stand trial because he can’t assist in his defense, a judge ruled…

Amy Painter comforts her son Riley on Monday during the dedication of Ralph Painter Memorial Highway honoring her husband, who was killed in the line of duty in January.

Friends and family of Ralph Painter pose for photos during Monday's dedication ceremony for Ralph Painter Memorial Highway, and 18-mile stretch of Highway 30 in Oregon.