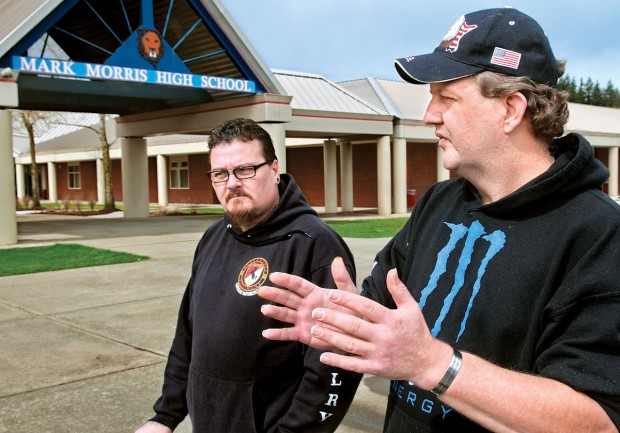 Kristopher North, left has raised $2500 dollars so far for a memorial at Mark Morris High School to honor Mikayla Bragg, Steve Bragg's daughter who was killed in Afghanistan last December. 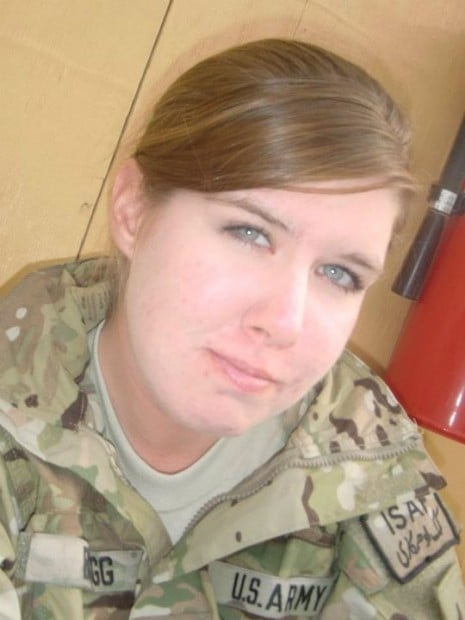 Kristopher North never knew Army Specialist Mikayla Bragg, but he wanted to make sure everyone remembered her.

"I overheard her mother say that in six to eight months no one would will remember who she was, and that's when it hit me," North said, recalling a moment during January's celebration of life service for the fallen Longview solider.

So North, a 43-year-old Longview Army veteran, started raising money to build a memorial for Bragg a few weeks later.

Bragg, a 2008 Mark Morris High School graduate, was shot and killed Dec. 20 while on guard duty in Afghanistan's southeast border region. She was 21.

Bragg was almost two weeks away from finishing her first deployment when she died. She was the first Cowlitz County soldier killed in a combat zone since the Vietnam War. Her death is still under investigation, and specific details have not been released.

North has raised $2,500 to build a 44-inch tall bronze fallen soldier battle cross in a courtyard at Mark Morris. However, donations have dried up over the past few weeks, and he has to raise the remaining $2,500 by the end of April if the memorial is to be built before the end of the school year in June.

"It's really important," said Steve Bragg, her father. "She influenced a lot of people at the school. ... It's something we'd like to have done so future generations know that freedom comes at a price, and to let everyone know who she was and the sacrifice she gave."

Another memorial for Mikayla s planned later this month, when a memorial tree is planted for her at Lake Sacajawea.

Bragg and North said raising the final $2,500 would be a tall task, but that it could be done. They're organizing fundraisers to make the final push.

"If I had a way to put up one for everyone who died over there, I would," North said. "But if I can help people just remember one of them, I'm doing my part."

Donations to the Mikayla Bragg Memorial Fund can be made at any Fibre Federal Credit Union location.

About 100 people gathered Sunday at Lake Sacajawea to honor Mikayla Bragg, the Longview soldier who died in Afghanistan in December.

'Fell through the cracks': Could Longview soldier's death have been avoided?

U.S. Army investigators have ruled that Spc. Mikayla Bragg of Longview died by her own hand in the line of duty in a guard tower last December…

More than 100 people packed into the Kelso Eagles hall Thursday afternoon to pay their respects to Army Spc. Mikayla "Kayla" Bragg, the first …

Public memorial for Spc. Mikayla Bragg to be held in Federal Way

A public memorial service for Army Specialist Mikayla "Kayla" Bragg of Longview will be held in Federal Way at 1 p.m. Saturday.

Gov. Chris Gregoire has directed that flags at all Washington state agency buildings be lowered to half-staff Thursday in memory of Longview's…

OLYMPIA — Gov. Chris Gregoire has directed that flags at all Washington state agency buildings be lowered to half-staff Thursday, Jan. 5th, in…

The Pentagon confirmed Friday the death of the Longview soldier who was serving in Afghanistan.

A female Mark Morris High School graduate was shot and killed Wednesday in a guard tower in Afghanistan, according to the soldier's stepmother…

Kristopher North, left has raised $2500 dollars so far for a memorial at Mark Morris High School to honor Mikayla Bragg, Steve Bragg's daughter who was killed in Afghanistan last December.