An annual count shows a decrease in Cowlitz County’s homeless population, but social service agencies say it falls short of the true number.

Of the 271 counted, 128 were in emergency shelters, like Community House on Broadway or Emergency Support Shelter, 72 in transitional housing and 71 were unsheltered.

The Point in Time Count, an annual one-day census of unsheltered and sheltered homeless people, has never been considered exhaustive, but this year’s results fall short of what service providers witnessed the last several months.

“I was shocked,” said Major Phil Smith with the Longview Salvation Army of 2022’s results. “I can’t imagine that’s anywhere near accurate.”

Smith volunteered during the February count, handing out more than 100 meals at the Alabama Street encampment in Longview. The Salvation Army stopped handing out meals at the site a few months ago, but earlier this year, the residents typically numbered in the high 80s, he said.

Even if the count included everyone at the Alabama Street site, it doesn’t include unsheltered people living by the Cowlitz River, in Kelso or other locations, Smith said.

Zach Dreier, coordinated entry specialist for Community House, said over 20 recent trips to the Alabama Street site, he’s talked to 100 unduplicated people, a majority of whom are from Cowlitz County. There’s also a large encampment near Fishers Lane and often people at Lake Sacajawea, he said.

By comparison, a supplemental report from the Department of Social and Health Services reports about 1,285 Cowlitz County residents were homeless in January 2021, based on combined Medicaid, economic service and Homeless Management Information System populations. The 2022 report was not yet available.

The Point in Time count may have missed people because the method, time and location changed, said Frank Morrison, Community House executive director. Washington state rescheduled the count from January to February because of high COVID-19 case counts, and Cowlitz County held the count at the Alabama Street site instead of its usual location in Longview.

Morrison said the overall number of homeless people may not have gone up from last year, but the pandemic and end to the eviction moratorium has led to people losing housing. In November 2020, following the release of that year’s count results, service providers said they expected an increase in 2021 after the moratorium lifted.

“I feel like with inflation, gas prices, it’s harder for people to survive,” Dreier said.

State law requires each county to conduct an annual homeless count. Counties must complete the count to receive funding from the U.S. Department of Housing and Urban Development and the state Department of Commerce.

The state uses the count for grant applications, and the federal government uses the data to make funding decisions, but the count is not tied to any specific county funding, said Gena James, Health and Human Services deputy director.

Before the pandemic, the county and partner agencies held an event offering services like free food, haircuts and housing resources on the day of the count and surveyed attendees.

This year, county staff and local volunteers surveyed people at the Alabama Street site and the Woodland Action Center, James said. The state also counted people registered in programs that use homeless management software, such as Community House on Broadway and the Emergency Support Shelter.

Some Point in Time counts in the early 2000s included volunteers and police searching out unsheltered people throughout the county, according to TDN archives.

Homeless get haircuts and health, housing information at annual event

The county uses the count results as a snapshot of the local situation and a way to see trends, rather than an all-encompassing survey, James said.

“When we talk about the PIT numbers, we don’t represent the count as ‘all individuals experiencing homelessness’,” she said. “We have to acknowledge it is not perfect and we are not able to count everyone.”

Local agencies and officials have recognized the count won’t capture everyone since the county’s first count in 2003, according to TDN archives. In 2006, Rick Kirk, Community House director at the time, said the count of 571 people may be only 50% of the actual number, which could be up to 1,500.

As a HUD requirement, the Point in Time count uses that agency’s definitions of homeless.

The count includes those self-identifying as homeless, as well as those living in emergency shelters, transitional housing and places not intended for human habitation such as cars, parks, abandoned buildings and on the street. Not all people sleeping in motor homes are counted, but could be if the RV is in disrepair, parked in an unusual place, or if occupants don’t have access to sewer, water and electricity connections.

People living temporarily with family or friends aren’t included. Those staying in hotels or motels may be counted if they pay for their room with a charity voucher, said Dreier, with Community House.

“It doesn’t reflect anything close to reality,” said Staudinger, who oversaw the Kelso nonprofit that houses families.

The U.S. Department of Education definition of homeless includes students who lack a fixed, regular and adequate nighttime residence; who share housing with others because of economic hardship; or who live in cars, public spaces or substandard housing.

As of the start of the 2021-2022 school year, 550 students in Cowlitz County identified as homeless, according to the Office of Superintendent of Public Instruction data.

In February, Longview School District staff reported about 64% of 218 homeless students were doubled up with other households.

Cowlitz County’s count also does not include those incarcerated.

The jail used to coordinate with Point in Time Count organizers to gather inmate data but hasn’t been involved in a number of years, said Marin Fox, Cowlitz County Department of Corrections director.

On Tuesday, 44 of 185 inmates, about 25%, reported they were transient during booking, Fox said. That’s likely lower than usual and would be higher if “homeless” was better defined, she said.

CHEHALIS — When his family, community, teammates and even players from rival sports teams think of Miguel A. Soto, they think of his beaming s… 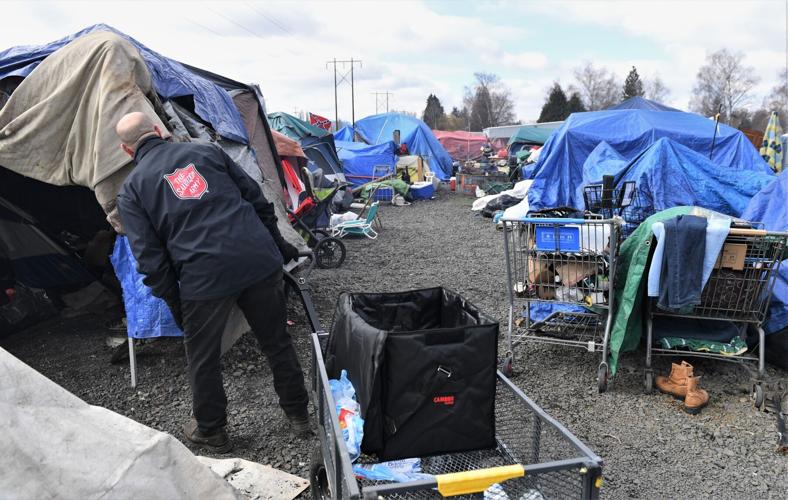 Longview Salvation Army Major Phil Smith offers hot meals to people inside a tent at the Alabama Street homeless camp during the county's Point in Time Count in February. Some service providers say the number may not be accurate. 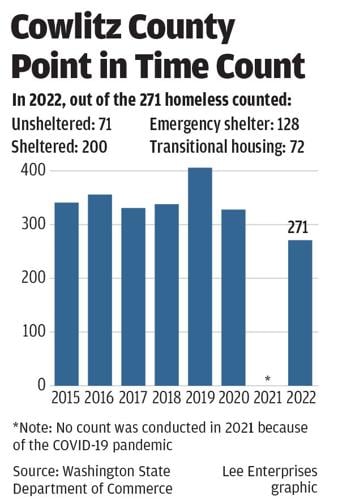