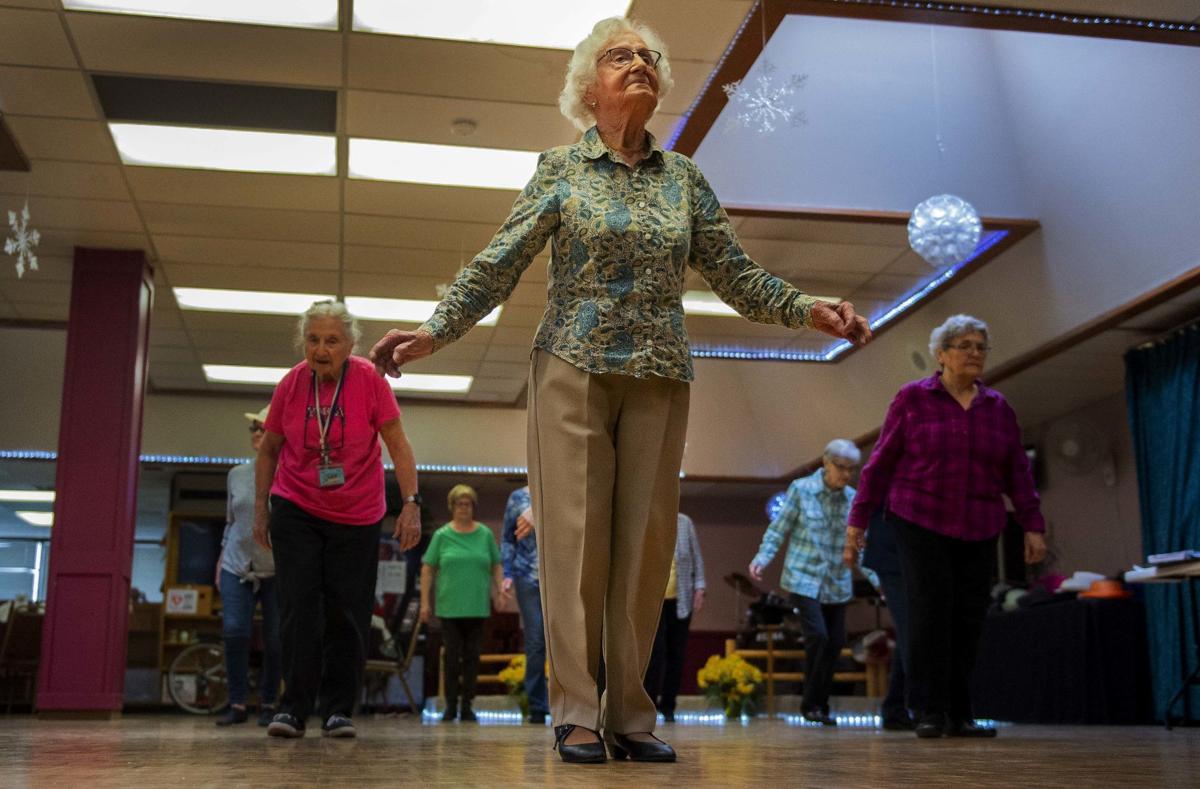 Daphne Poole, who turns 100 years old Saturday, dances to Waltz Me to Heaven by Waylon Jennings at the Longview Senior Center April 2, 2019. 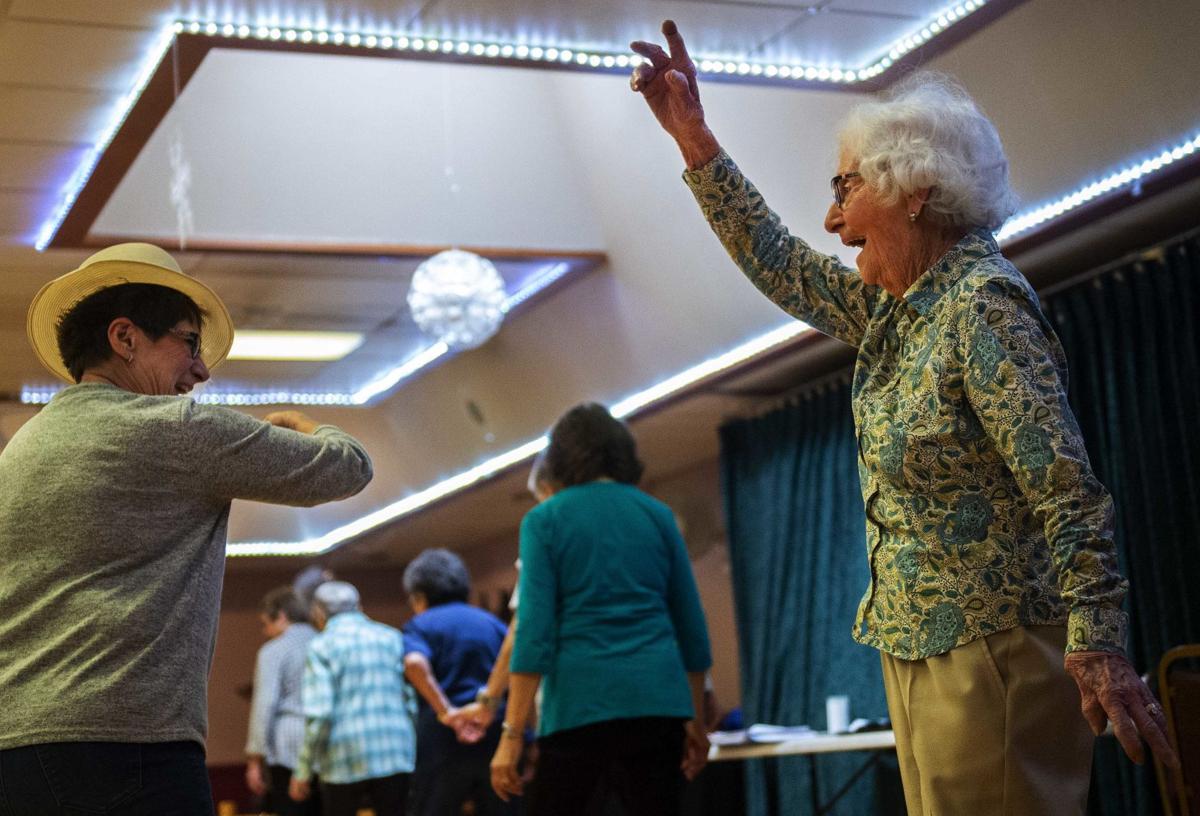 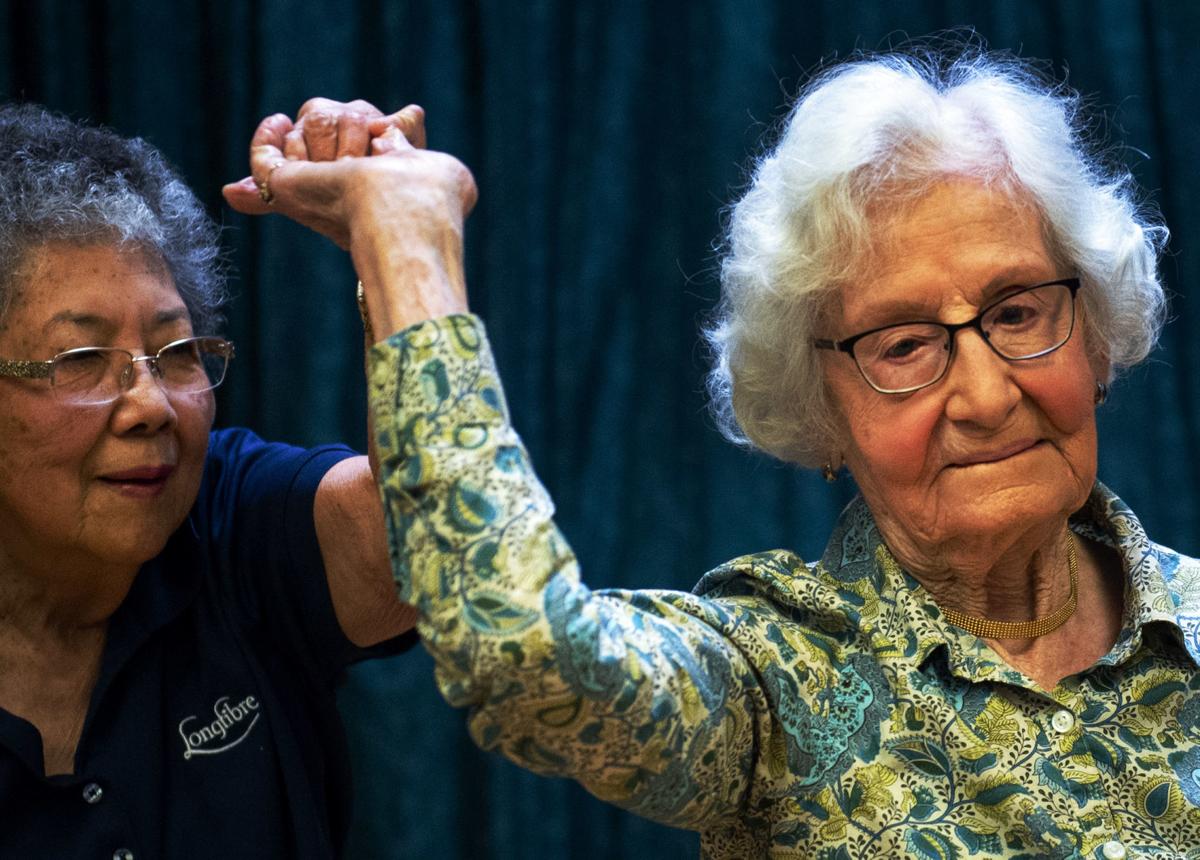 Daphne Poole, right, dances the waltz with her friend Thelma McCarthy, left, during a dance class at the Longview Senior Center Tuesday morning. 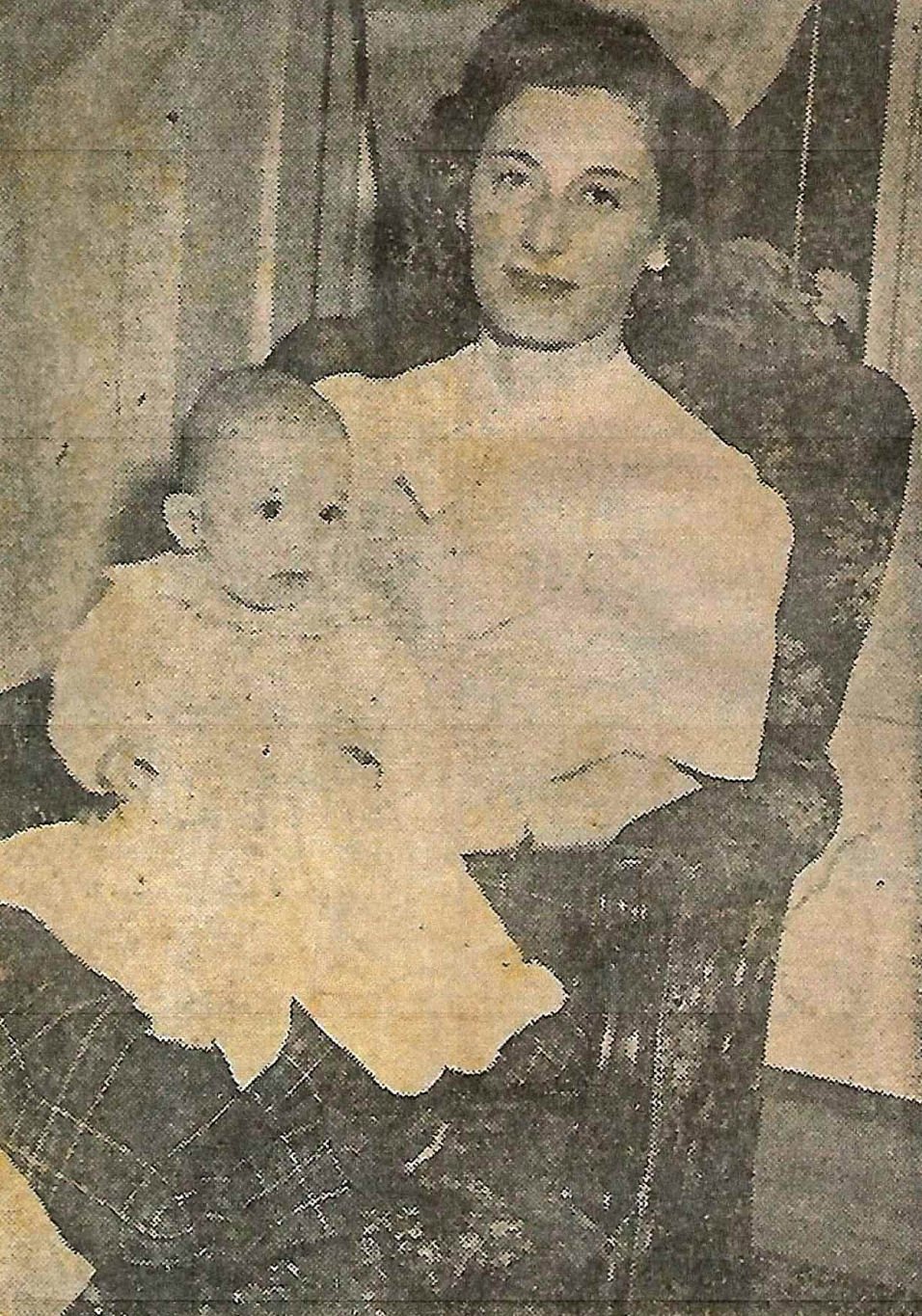 Daphne Poole in 1945, soon after coming to the United States. 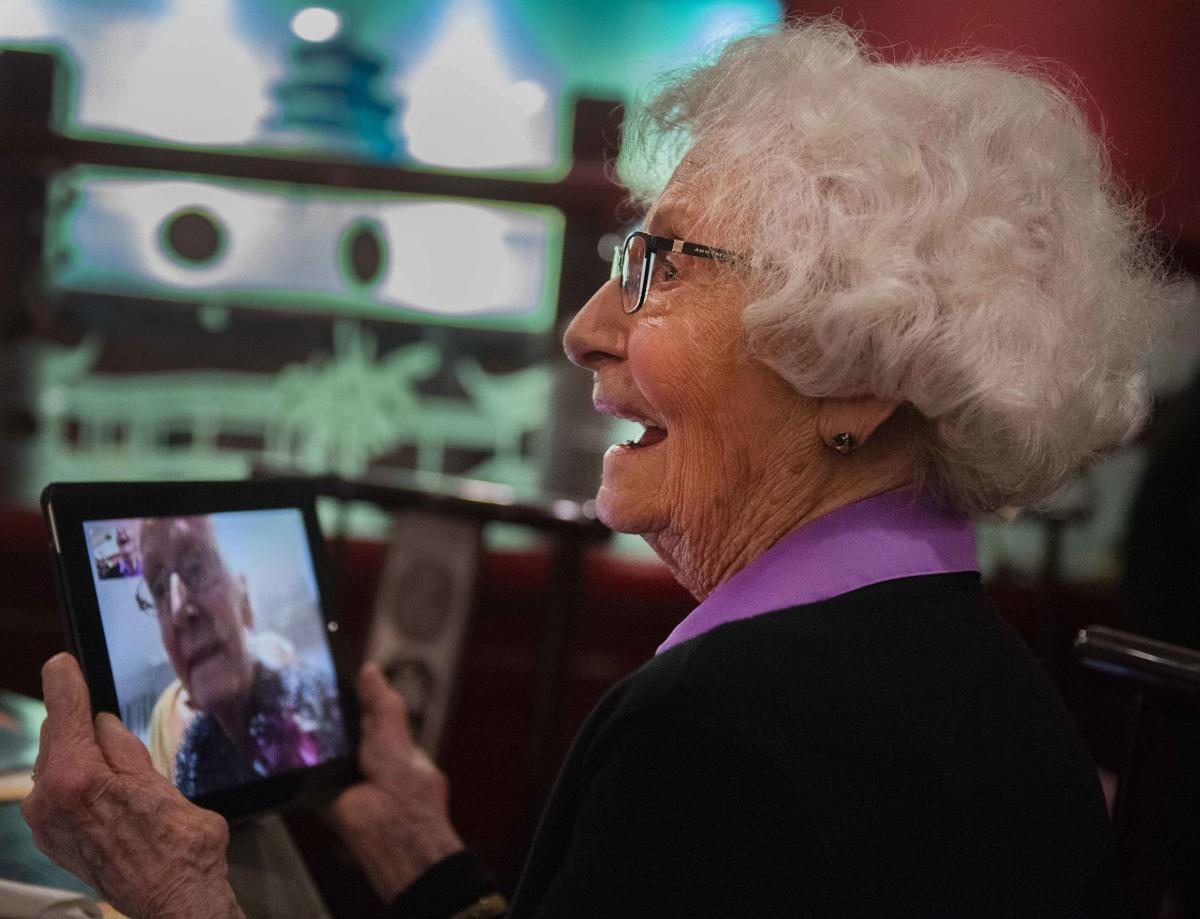 Daphne Poole, who turns 100 years old on Saturday, talks with her sister, Avon Hayes who already turned 100 in Australia over FaceTime Friday evening at the Chinese Chinese Garden restaurant in Longview.

When Daphne Poole and her twin sister Avon were growing up in Australia, they rode horses, played tennis and helped their dad muster cattle on their parents’ 4,000-plus acre ranch called Granite Hills.

They attended country school around a small town named Warwick and took correspondence classes by mail.

And they loved to dance — so much so they were known as the “belles of the ball.”

“It was a lovely little town,” Poole said Tuesday in a gentle Australian accent. “I never regretted it. I love Longview. Nobody better complain about Longview to me, or I’ll snap them up.”

Poole and her family celebrated her 100th birthday Friday night with a call with her twin, who still lives in Australia. Due to the time zone difference, Avon turned a century old a day earlier than Daphne.

You’ll often find Poole tending to her primroses and fuchsias in her home garden, or line dancing at the Longview Senior Citizen’s Center. Dancing, one of Poole’s greatest passions, is “an expression of joy and companionship,” she said.

Animated and thoughtful, Poole attributes her success in life to two qualities: staying positive and observant.

“I’ve had my sadness and my problems. I’m not a rich woman, not financially … but I feel very rich.”

In a way, Poole’s childhood was magical, but it was also lacking, she said. In that time, children were seen but never heard, she said, and she received very little formal education.

“My education was very low. My education has been observing. You can’t get away with anything when Daphne’s around,” she laughed.

At 18 and feeling restless, Poole left Warwick and moved to Brisbane, initially working as a seamstress in a dress shop. But when World War II broke out during her early twenties, Poole swapped work on dresses for warplanes.

Poole will proudly tell you that she was a real “Rosie the Riveter” — a woman who took over traditionally male jobs in factories producing munitions and war supplies in the early 1940s.

She worked at a Brisbane aircraft factory repairing large warplanes. Since she was small, she could fit into tight sections inside the planes and hold metal plates in place while another person fired the rivet gun.

The women didn’t talk much during the work, Poole said. Their focus was on the war effort.

“I was young, and I just did my work,” Poole said. “(But) I was happy to be part of helping the situation.”

While attending church during this period, she met Phillip Poole, an American army sergeant serving under General Douglas MacArthur’s command. Phillip Poole was the only member of his company who could write in shorthand, so he worked closely with higher-ups in the military taking notes and working behind the scenes.

They married in May 1944, and a year later Daphne Poole sailed to San Francisco on the SS Lurline with their three-month old son Richard, just a month after the war ended. It was a 14 day, non-stop journey bringing more than 4,250 servicemen, war brides and children home to the U.S. Phillip soon rejoined Daphne after finishing his time overseas.

A Tacoma newspaper wrote that year about Poole’s arrival and noted her immediate fondness for the United States when she arrived. Its headline proclaimed: “America Wonderful To This Australian Bride.”

“I loved it,” Poole said. “When my husband’s parents picked me up in San Francisco, and we drove to Tacoma ... I felt so relaxed, and I made this positive statement: I know I will be happy here.”

Her optimism hasn’t changed in all the years since, especially for Longview, where she moved to soon after arriving in the U.S. In 1948, she and her husband bought a home in the Old West Side built for city founder R.A. Long in 1923. They paid about $9,000, and Poole still lives there to this day.

Phillip Poole worked at the Longview Fibre Co. plant and later at Fibre Federal Credit Union. He died in 1988 at the age of 73.

Thelma McCarthy, a member of the Longview Senior Center, met Poole through line dancing. She described her friend as a fun-loving and intelligent. Prior to quitting driving around the age of 99, Poole often drove over to help care for her when she was ill, McCarthy said.

“She’s so concerned and very sincere,” McCarthy said. “(And) she’s game for whatever we do.”

“I brag about her all the time,” Longview senior center vice president Danni Franett said. “She (still) dances in heels.”

And as far as what contributes to a long life: “Oh my dear man,” Poole said. “I haven’t got a clue.”

Daphne Poole, who turns 100 years old Saturday, dances to Waltz Me to Heaven by Waylon Jennings at the Longview Senior Center April 2, 2019.

Daphne Poole, right, dances the waltz with her friend Thelma McCarthy, left, during a dance class at the Longview Senior Center Tuesday morning.

Daphne Poole in 1945, soon after coming to the United States.

Daphne Poole, who turns 100 years old on Saturday, talks with her sister, Avon Hayes who already turned 100 in Australia over FaceTime Friday evening at the Chinese Chinese Garden restaurant in Longview.