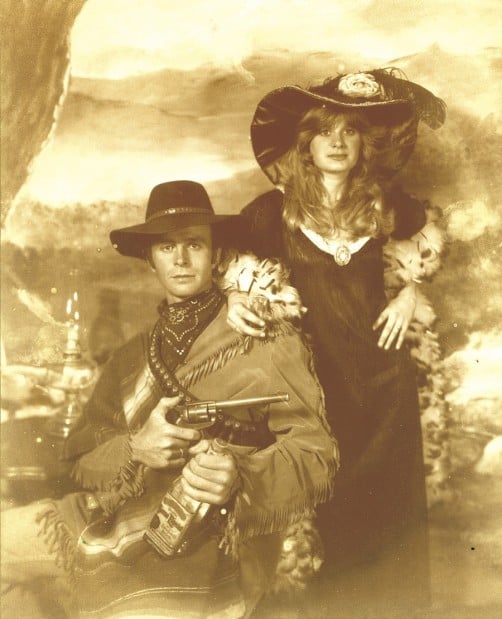 This 1980 photo of John and Christy Killian hamming it up in an 'Old West' photo is one of his sister Judy O'Neill's favorite shots of the couple, who were killed a few months later. 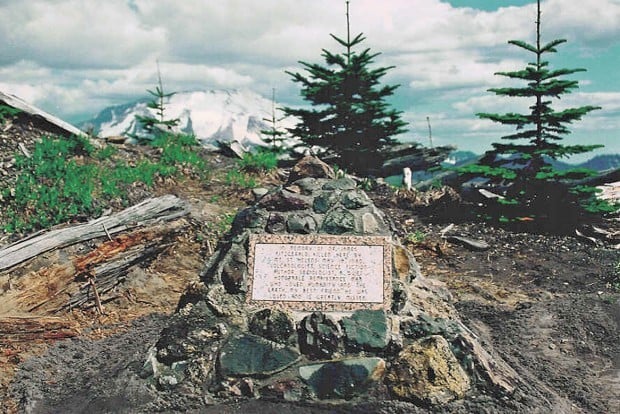 Trixie Anders constructed this monument to her friend Jim Fitzgerald in 1995, at the Spud Mountain site where he was killed in the Mount St. Helens blast. 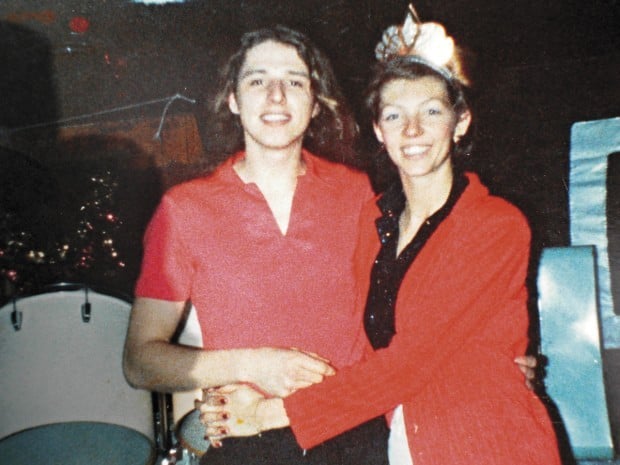 Terry Crall and Karen Varner celebrate New Year's five months and 18 days before they were killed in the Mount St. Helens eruption.

If May 18, 1980, had been just any other day, Bruce Nelson has no doubt where his friends Terry Crall and Karen Varner would be today: enjoying the Alaskan outdoors.

"I know I would have talked them into coming up here," he said recently in a telephone interview from his home in Juneau, Alaska. "I know Terry would have followed the fun."

Charlene Merzoian says her brother and his new bride, John and Christy Killian of Vader, would no doubt have had the children they already were trying for and likely would be grandparents by now.

"She really wanted a family," Merzoian said of her late sister-in-law. "She'd come over and play with my kids all the time."

And Jim Fitzgerald would be teaching about and researching volcanoes, which so fascinated the 32-year-old Ph.D. student.

But that day was far from normal.

At 8:32 a.m. Mount St. Helens erupted, leading to the deaths of 57 people, including Crall, Varner, the Killians and Fitzgerald. And in the ensuing days and decades their family and friends were left with only memories, regret and questions of what might have been.

Which parent would have organized the school carnival for years or run for the school board? Who would have achieved acclaim in their field? Who would have gone on to be the helpful neighbors that are the very backbone of a community? And what did society lose without these 57 people contributing?

"It's similar to when war takes numerous soldiers or a disease wipes out a swath of people," said University of Portland psychology professor Deana Julka of the sudden loss of so many people. "There is that sense of lost potential ... that sense of ‘what if?' and ‘if only.' "

If the mountain hadn't blown, John Killian would still be playing pranks, cracking jokes and having fun, two of his sisters, Charlene Merzoian and Judy O'Neill, said. This was a man who once dressed as a bear and hiked through the woods just to scare O'Neill, they recalled recently at her Kelso home.

One of O'Neill's favorite pictures of John, 29, and Christy, 20, is of the couple dressed in Old West clothing and hamming it up for the souvenir fair picture.

John bought land near Merzoian and her husband in Toledo, and she is convinced the two men would have gone into the timber business together. The sisters also believe their brother's son from his first marriage, then 6, would have come to live with his father and stepmother permanently.

"He'd come out every summer, and he just loved it out here," O'Neill said. Mark Killian now works in California as a graphic artist.

The whole family is heavily involved in the Masons and the sisters said they're sure John also would have donated countless hours to community projects.

Without the eruption, the entire Killian family also would have been spared the bitterness and disillusionment of fighting to clear their loved ones' names after officials incorrectly accused most of the dead of illegally entering restricted zones around the mountain. The misperception persists today, despite evidence to the contrary, and a subsequent failed lawsuit aged their parents, Ralph and Jeanette Killian of Vader, before their time, the women said.

"There's just been no closure," O'Neill said of the effect on her family and especially her parents. "We don't see the beauty in the mountain anymore."

There's no telling what Fitzgerald might have discovered during 30 more years of researching volcanoes if the May 18 eruption hadn't taken his life, Anders said.

Anders, known as Bea Johnston in 1980, believes she and Fitzgerald would have married and gone on to teach countless students about the subject they loved. (Anders was married in 1980 and she and husband just barely escaped death during the eruption. The marriage collapsed afterward, but Anders said it already was on the rocks before May 18th).

"Being professors and teaching geology and researching, that was really our goal," she said from her Colorado home. They likely would have settled wherever the first one found a teaching job, she added. He was a Ph.D. candidate at the University of Idaho. She was a masters student at nearby Washington State University.

Fitzgerald was a talented science fiction writer, and Anders believes he would have continued that and other artistic pursuits, calling him an "honorable Renaissance man" in the memorial she built in 1995 at the site of his death on Spud Mountain, just west of Mount St. Helens.

Anders, now 59, never got a Ph.D. like she hoped, saying the stress of the eruption and subsequent divorce doomed those plans. Today, though, she climbs active volcanoes around the world with her second husband and remains fascinated by their beauty, history and power.

And though it's been 30 years, not a day goes by that Anders doesn't miss her best friend.

"He's always there," she said.

'Could have done anything'

Friends and family have no doubt that Crall and Varner, both 21, would have married and remained lifelong outdoor enthusiasts. Without the eruption they would have led the normal, happy life they dreamed of instead of dying in each other's arms 30 years ago at a campsite near the Green River, loved ones said.

Varner wanted to be a nurse and friends and family said she was intelligent and independent enough to excel at it. Crall dreamed of being a game warden, and Nelson said the outdoor life would have suited "the kids" as he refers to the couple. (Nelson was camping with them at the time of the eruption, barely surviving himself).

"They'd be married and raising a couple of kids, maybe, and just having a life," Karen's brother Mike Varner said. "They were great together. They did everything together. And they loved the outdoors and the Northwest."

Nelson is convinced their lives would have led them to Alaska - possibly with Crall working as a fishing guide. He thinks Varner would have found a job at a hospital or for the health department.

"Once you're out on a boat up here, the world just opens up and that's what I think about them," he said. "They were just amazing people with hearts of gold and they had the personalities that they could have done anything."

Victims of the 1980 eruption

If Mount St. Helens hadn't erupted May 18, 1980, 57 people, most from the Lower Columbia region and Pacific Northwest, would not have perished…

The remains of 36 of the 57 people who died in the Mount St. Helens eruption were found in the two years following the blast. Twenty-one addit…

This 1980 photo of John and Christy Killian hamming it up in an 'Old West' photo is one of his sister Judy O'Neill's favorite shots of the couple, who were killed a few months later.

Trixie Anders constructed this monument to her friend Jim Fitzgerald in 1995, at the Spud Mountain site where he was killed in the Mount St. Helens blast.

Terry Crall and Karen Varner celebrate New Year's five months and 18 days before they were killed in the Mount St. Helens eruption.
© Copyright 2020 The Daily News Online, 770 11th Ave Longview, WA | Terms of Use | Privacy Policy
Powered by BLOX Content Management System from TownNews.com.
You don't have any notifications.