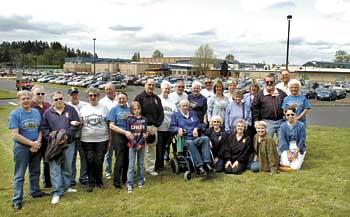 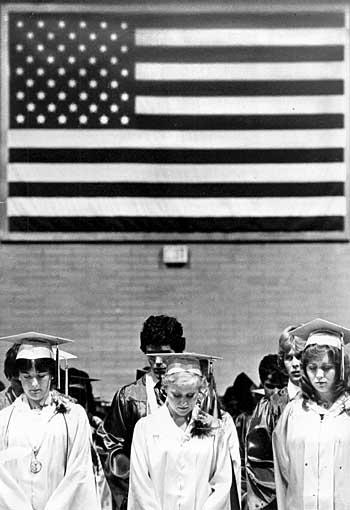 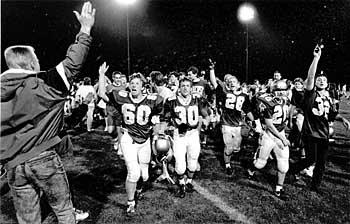 When Joe Stewart was a little boy around 1960 he spent his days watching the Kelso High School football team practice at the old Schroeder Field, then located downtown.

“You always got the feeling at that time that Kelso High was a great place to look forward to going to,” said Stewart, who graduated in 1972.

“So many people have such a great sense of closeness and pride that they were able to be a Hilander,” said Stewart, who was a guidance counselor for 18 years, a track coach at the school until 2003 and still coaches cross-country.

“Kelso High School has always been the focal point of this community. That’s the benefit of a one high school town.”

Kelso graduates bleed blue and gold, and this year’s graduating class, the 100th senior class in school history, will do the same.

The school, which graduated its first class 15 years before Longview even existed, has long fed off the rivalry with its neighboring town. It is in its third building and its second football stadium. It has sent thousands of graduates to college and careers, coped with volcanic eruptions and WASL exams, and created millions upon millions of memories.

Their fierce loyalty is captured in the motto, “We are Kelso.”

Except for a commencement ceremony surprise, the school district is planning few special activities to mark the centennial. But, to help celebrate the milestone, The Daily News is calling upon graduates to share their memories and thoughts about their loyalties to the school. We’ll publish them on our website and a special section planned for graduation week (see sidebar for details). We’d also like some help finding the oldest living graduate.

To prime the pump, we went around asking some particularly enthusiastic alums about their memories and what Kelso High continues to mean to them.

Although the site of their school is a now a grassy lot atop a hill off Academy Street, the class of 1960 is vibrant as ever.

Members meet frequently at Stuffy’s restaurant on Ocean Beach Highway in Longview, some every day.

“We have a camaraderie in the class I don’t think anyone can meet,” said class member Gail (Ludum) Dewitt.

Class member Carol (Disque) Barnes recalled girls’ counselor Hazel Marcellus, who had worked at the school since the 1920s and didn’t retire until 1968. “I became like the daughter she never had,” Barnes said.

The group has many fond memories— dancing and swimming at the Crystal Pool at the end of Allen Street on the Coweeman River— and some not so pleasant ones, such as those of “hacks”— a board used to hit students on the backside. While it was excessive at times, the discipline was mainly used to embarrass students rather than hurt them, said Donna (Alberti) Hilton, class of 1960.

“There are a lot of good memories,” said Jim Anderson, a 1961 graduate who often joins the 1960s grads at Stuffy’s. His was “the neatest time going to school.”

He especially liked the music, and recalled that just as a pep rally was getting over one evening a band called The Four Beats broke into “Johnny Be Good.”

Gary Swanson was the school’s official bagpiper, a tradition that ended in 1988. The title went to “anybody that had enough guts to wear a kilt,” said Swanson, who remembers terrorizing his cows with the instrument and playing it at basketball games.

For much of its history, Kelso High School was located in a brick building atop the hill along Academy Street, and many graduates lamented its closure and demolition in the 1980s.

“There was something about that old high school,” said Stewart. It was on a hill. It was “an interesting building,” in some places three-stories high. There were pictures of each graduating class in the main hallway.

When Stewart moved to the new school in East Kelso in 1970 there was “no place to put up those pictures,” he said. That was “one disappointment about moving. All my brothers and sisters had pictures up.”

But the tradeoff was a good swimming pool and a big gym, he said.

Betty (Mills) Crawford, class of 1944, still meets with her classmates once a month and remembers the old high school under construction. In particular, she remembers workers on the ground tossing red-hot rivets to up to ironworkers who caught them in leather buckets for use in the gym roof.

It was a tough time for the school, and for America, said Crawford and Don Ames, class of 1945.

Crawford said her class pulled together though the difficult war years. “We went through an awful lot,” she said. “I think that’s why were so close.”

Students were “living under the cloud” of World War II in the 1940s, Ames said.

Students and teachers would leave in the middle of the school year and sometimes never return. “We didn’t know that was going to happen,” Ames said.

So much was rationed during the war days — meat, shoes and gasoline — Ames remembered. The school stopped supplying the “rooter bus” to sports fans. Cars were hard to come by, since they were not produced between 1942-1946, he said. Hitchhiking was popular, especially among students who lived out of town.

Jobs were plentiful at that time for students like Ames, with so many men gone at war. He worked at the Weyerhaeuser Co. pulp mill, but “some people started working in the shipyards in Portland, where wages were higher,” he said. “They quit school to work in the shipyard.”

The Thanksgiving Day game between Kelso and R.A. Long High School may be among the most missed traditions among Hilander alums.

Football has always been an unofficial state religion in Kelso, and the bleachers usually were packed as coaches such as Emmett (Mutt) Schroeder led the Hilanders against the Lumberjacks. Schroeder Field is named for the beloved coach, who coached Kelso for 18 years, ending in 1952.

“Thanksgiving was the game to go to. It was really intense,” Crawford said. “We had to win that one, and Longview felt the same.”

The last Thanksgiving Day game was played in 1972, with Kelso winning 13-0. Nowadays, schools finish their regular seasons and begin playoffs before November.

Under Coach Ed Laulainen, the Hilanders won the 1983 AA state championship with a 28-7 win over Sedro-Woolley. The Seattle Post Intelligence disparaged Kelso that year, snubbing it as “a truck stop.”

“The truck stops here,” chanted the Kelso crowd, as their team won the championship title.

That response is a little hint of “The pride that you feel,” graduating from Kelso High School, Stewart said.

Crawford, 82, has seen many changes at Kelso High school since she was growing up in the 1920s and 1930s. But one thing remains the same, she said.

“We’re gold and blue all the way through.”