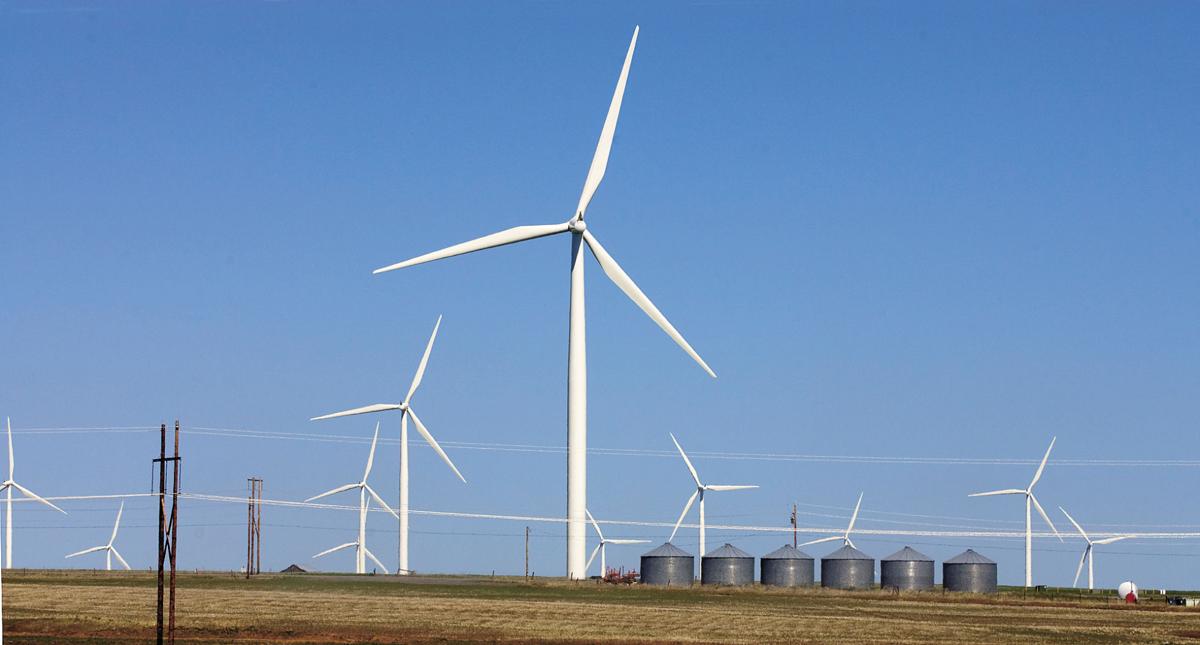 The White Creek Wind Farm is one of many changing the landscape in the Columbia River gorge as it helps provide a renewable energy source for the Cowlitz PUD. 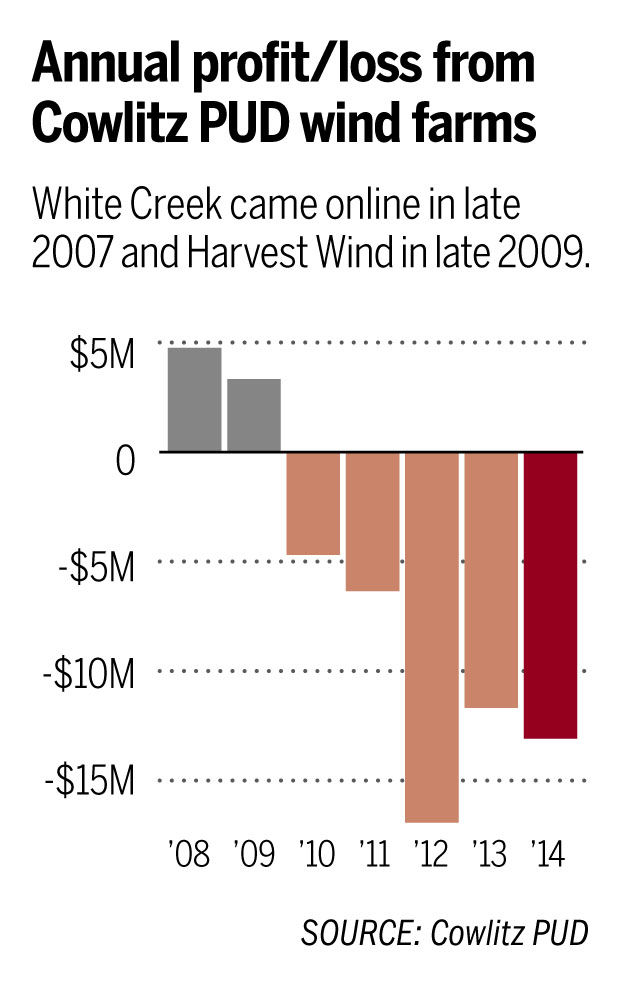 A breeze blows down the Columbia Gorge, stirring dozens of giant windmills that the Cowlitz PUD helped build.

Electricity generated there shows up on your power bill, but it doesn’t keep your lights on.

The utility’s two wind farms used to turn a profit, but now they’re losing more than $13 million a year.

And with the state holding a gun called Initiative 937 to the PUD’s head, the utility and its customers don’t have much choice but to keep covering those losses solely to satisfy state renewable energy requirements. The cost: 9 percent of residential rates, or about $9 on an average monthly bill.

The PUD’s huge investment in its Harvest Wind and White Creek wind farms may never pay off, but the future is about as certain as next week’s weather forecast.

“Who knows the value we’re going to see out of it, because of where the Legislature is headed or where initiatives might take us,” PUD General Manager Don McMaster said. “I-937 sure changed our world. The next (changes) I guarantee you won’t make our lives easier or less costly.”

On the plus side, the $130 million investment means the PUD satisfies state renewable energy requirements through 2027 under current law.

But there’s the tiny matter of wind farms running a $1 million-per-month loss, with no profits projected anytime soon, thanks to a depressed market for the power. It’s like owning a rental home in an area with too many rentals and not enough renters and having to lease for a price that doesn’t cover your costs.

There was a time when wind energy was lucrative enough to cover costs and then some, bringing the PUD $3 million to $5 million in good years.

That was before California set new rules on its own renewable energy requirements in 2011. The Golden State mandated buying nearly all renewable energy from inside the state, tanking the market for Pacific Northwest renewables.

“Initially, wind did have a good return, but a substantial change in the California market dropped that value to the point where we were losing money on the projects and actually still are today,” PUD Director of Power Management Gary Huhta said. “We’re not recovering enough revenue to cover the full cost of the project.”

The wind farms also are a driver of the PUD’s debt, currently at $225 million.

For ratepayers, the monthly losses already are part of the price of power. The 18 percent rate hike in 2011 largely absorbs the red ink, officials said, and they’re confident existing I-937 requirements shouldn’t lead to any rate hikes in the future.

“When we did our increase in 2011, that captured the significant loss of that big ... shift in the market,” Huhta said.

But the wind power is being sold off to regional utilities instead of being used in Cowlitz County, meaning that part of every consumer’s PUD bill is going solely to satisfy I-937. That shows up as $0.0067 per kilowatt-hour on a residential bill, or about 9 percent of the rate.

Even if the PUD needs to meet an increasing demand, it has elected to sell off wind power to others in favor of buying more dependable electricity from other sources, Huhta said.

”When you’re trying to manage and serve a load, you want a resource you can count on,” he said.

Cowlitz PUD is not unique in its moves to meet the terms of I-937.

“Every qualifying utility — those with over 25,000 customers — is having to pay for (electricity) resources that for most of the state are not needed,” said Washington PUD Association Executive Director George Caan. “The mandate was put into place where we had expectations of large load growths that have not materialized.”

The alternative to owning renewable energy to comply with I-937 would be to buy “credits” from renewable producers. Caan said about half of state utilities buy into renewable projects, like Cowlitz PUD did, and half buy credits to meet I-937 requirements.

If the PUD had been buying credits instead of building and operating wind farms, this year it would be paying anywhere from $155,000 for credits to $7.75 million in state penalties for foregoing the requirements.

That’s certainly less than the $13 million the utility is losing now, but Huhta said the situation was, and remains, unpredictable.

“Let’s assume we didn’t build these plants, and we were just buying (renewable credits),” Huhta said. “What would the cost of those credits have been? Would we have been catching the bottom of the market and buying $1 (credits)? I doubt it.”

With the wind farms, the PUD is at least better positioned to meet increasing renewable requirements.

Since 2012 the PUD has needed 3 percent of its total load met with renewable energy sources or credits; in 2016 it will rise to 9 percent; and in 2020 it will reach the 15 percent peak.

By 2027, however, energy production at Harvest Wind and White Creek won’t be enough to meet I-937 requirements. The utility then will have to start buying additional renewable credits, because PUD officials have no desire to finance additional wind projects.

Even then, officials maintain existing rates will cover all I-937 requirements.

In fact, there may be some willingness to sell off some of the wind interests, potentially driving rates down — a proposition that requires some optimism.

“We would desire to at least recover our costs in Harvest Wind,” Huhta said. “If we could do that, it’s very possible that we would sell Harvest and then rely more on the market (to meet renewable energy requirements). That would put us in a more balanced state.”

All the plans in place now assume a slight and steady growth in electricity demand in the county.

If a major power-consuming industry builds here, as many in the county would like, everything could change. The increased electricity demand would mean an increased renewable requirement — and the PUD can’t just tell the wind to blow harder at its farms.

“One thing I’ve learned over the years is when you think you’ve got it figured out, it changes right underneath you,” General Manager Don McMaster said.

Energy by the Numbers

Cowlitz PUD and the other 17 state utilities required to get 15 percent of their electricity from renewable sources — or via renewable energy credits — by 2020 could have new options for meeting Initiative 937 requirements under two bills catching wind in the state Legislature.

Both measures would help utilities find more ways to comply with the state’s renewable energy rules.

Senate Bill 5735 would allow carbon reduction spending to count toward I-937 compliance, while Senate Bill 5094 proposes hydroelectricity efficiency improvements count toward the requirements.

The Cowlitz PUD previously warned that any changes to the law — especially those that water down requirements — could threaten the utility’s Central Washington wind farm investments by lowering demand for their energy and associated renewable credits.

But Washington PUD Association Executive Director George Caan said that wouldn’t be so.

“I don’t believe it would undercut the value of wind farms,” he said about SB 5735 “I think it would provide more value to consumers, like more energy efficiency instead of sending money to wind farms.”

“Any carbon initiative is going to make the wind look better,” he said. “It will affect the resources we rely on in some form or fashion. As for the end result — we don’t know who the winners and losers are going to be.”

Both bills passed the Senate last month and are making appearances in committees in the state House.

The White Creek Wind Farm is one of many changing the landscape in the Columbia River gorge as it helps provide a renewable energy source for the Cowlitz PUD.