Not all treasure found in a chest is gold.

That’s what the women of the Timmreck family discovered when they examined the contents of a trunk owned by family patriarch, Eugene Smith. Inside were photos, writings and memorabilia that are priceless to the Kelso family.

They are sharing the trove with the public during this year’s Veterans Day Program and Display at the Rose Valley Grange.

The trunk and the keepsakes inside were loaned to Molt for the program by Maxine Timmreck and her daughter, Becky. The items belonged to Maxine’s father, a Carrolls resident who died 10 years ago. They had been stored in the attic of Eugene’s home.

“Dad and I sat once and went through a few of the things, then he got emotional, and it was put away,” Maxine said. “He was one of those people who didn’t talk about things.”

Molt, a genealogist, was a client of Becky Timmreck, a local massage therapist. She and the masseuse began talking about the trunk and got together to look through it.

Becky Timmreck volunteered the family heirlooms for the Grange to use, and Molt jumped at the chance.

She and Timmreck laid the items out, then called Maxine to come and examine the display.

When she saw it, Maxine was floored.

“I said, ‘Oh my gosh! I think that’s my mother’s wedding dress!’ ” Maxine said, adding she wondered for years what happened to the dark blue outfit her mother wore in the couple’s wedding photo from the early 1940s.

Come to find out, Eugene, who had served in the Navy during World War II, saved all sorts of memorabilia of his time in the military and the life he shared with Virginia, a Chippewa native who died 20 years ago.

Young Eugene purchased a diary the day he signed the paperwork to enter the Navy and began keeping track of his experiences. The military didn’t take him right away, and during the time before he shipped out, he met Virginia, who was working in the shipyards in Portland.

The angst of young love leaps from the pages.

“He says in there that he got drunk, and she wouldn’t have anything to do with him,” Molt said. “The next time he saw her, she was with another man.”

The distraught sailor, who went on to be stationed on the USS Indiana, bemoaned the situation.

“He wrote ‘I guess that means that I’ve lost her, but I will love her for the rest of my life,’ ” Molt said.

His prediction turned out to be false.

“Those are the kinds of stories that you get out of World War II,” Molt said.

The heirlooms fit the Grange exhibit theme perfectly, Molt said. No weapons will be displayed.

“We are just interested in the lives of the soldiers,” she said.

Uniforms, medals — including a Purple Heart — letters, photos and other items will cover the walls.

Last year’s presentation was popular with young and old, Molt said. Bus loads of students visited and were in awe of what they saw.

Molt had hung the Purple Heart on contrasting backing and up high so it could not be touched.

“Those kids with their phones — every one of them took a photo of it,” she said.

“I didn’t realize that they connected with it like that.”

“Most veterans don’t come home and talk about where they’ve been,” she said. “But when I put these displays up, they’re all over me.”

Getting the men and women to share their recollections resonates with the genealogist in Molt.

“If veterans don’t talk about it, then we lose those valuable memories,” she said.

Maxine said she feels her father, who had been so private when he was younger, would be happy his descendants are sharing the legacy he left in the attic.

“If he were here, he would probably be more willing to talk now and shed light on a lot of it,” she said.

Brenda McCorkle is part of the Community News team and writes features for The Daily News. Reach her at 360-577-2515 or bmccorkle@tdn.com.

Admission: free; the public is welcome.

It was only two weeks ago that Spike, a 23-year-old chihuahua mix from Ohio, was named the oldest living dog. Now, he has been utterly dethroned.

Allen- Robert P., 92, of Rainier passed away on January 28, 2023 at his in Rainier. Green Hills Memorial Gardens Crematory & Cemetery 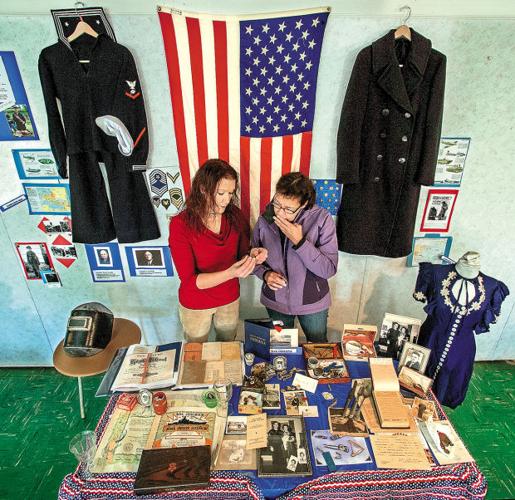 Becky Timmreck, left, and her mother, Maxine Timmreck, marvel at some of the mementos Maxine’s father, the late Eugene Smith of Carrolls, saved in a trunk found in his attic after his passing 10 years ago. 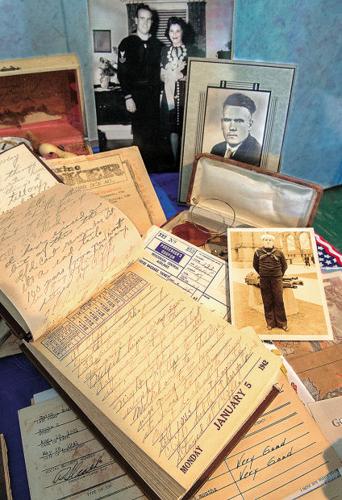 The memories of Eugene Smith and his wife, Virginia, will be part of a display at the Rose Valley Grange from Nov. 11 to 14. Heirlooms the public can peruse include a diary, photos, knickknacks and other World War II items.