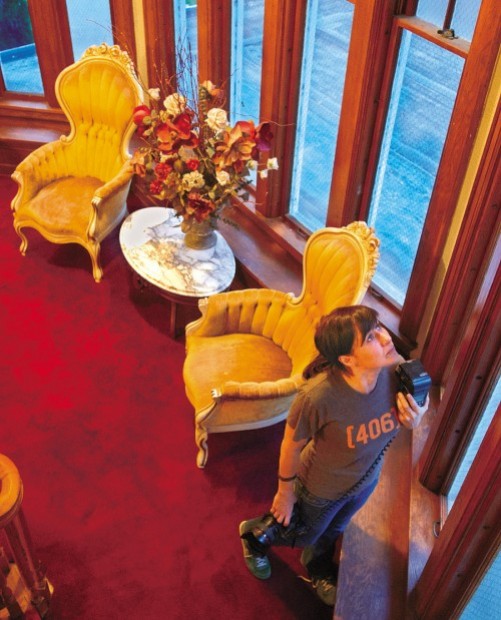 Photographer Kristy Hruska-Larson tagged along with the Paranormal and Occult Research Team (PORT) to an investigation of the Rutherglen Mansion. On the stair landing, she checks out the windows of the mansion, which was built in 1923. 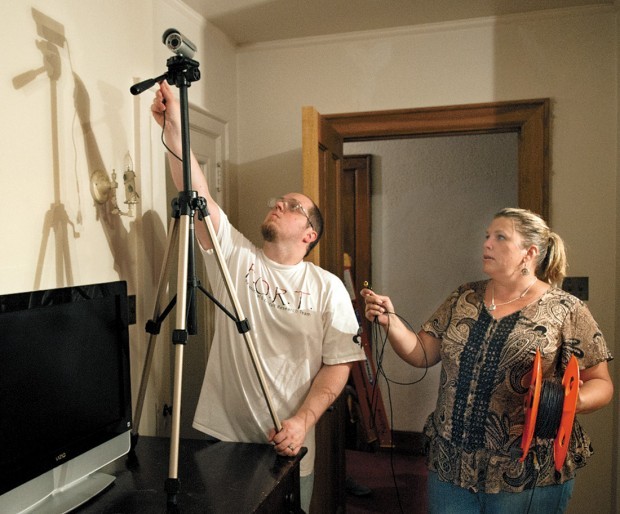 Casey Lunsford, left, and Carol Ann Carnese of PORT set up an infrared camera in one of the areas the group investigated. 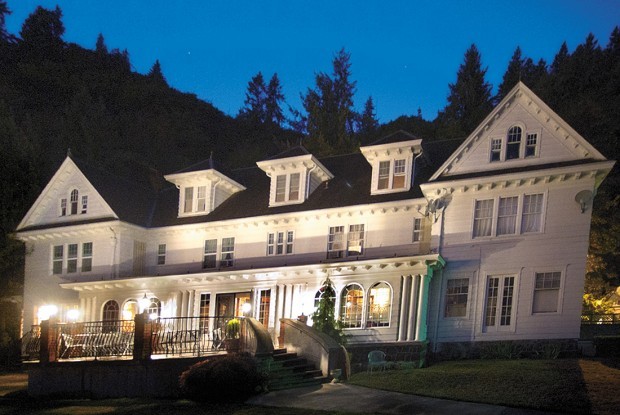 Spotlights outside the Rutherglen Mansion cast an eery glow on the white walls of the building. 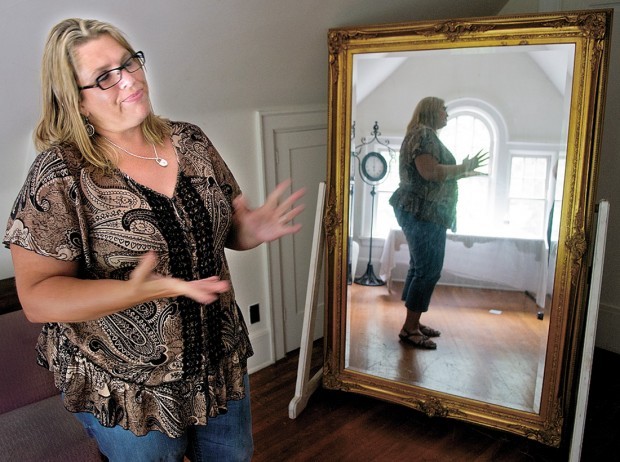 PORT member Carol Ann Carnese did the research for the group’s visit to the Rutherglen Mansion in Longview. In the bridal room on the top floor of the building, she explained the story of a young couple who haunt the mansion. 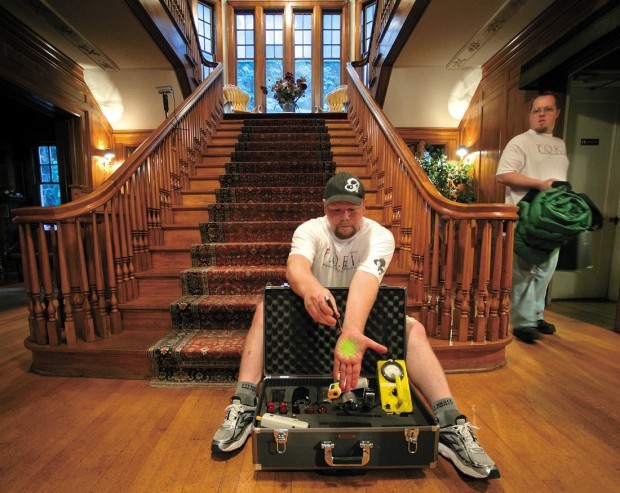 PORT founder and leader Ben Robison shows a laser pen that casts a grid on any surface, which allows investigators to gauge the size of an apparition. PORT member Casey Lunsford looks on.

The setting is ripe for stories of specters and things that go bump in the night.

But is the local landmark haunted?

The long-held rumors of ghosts at the mansion brought members of PORT, the Paranormal and Occult Research Team, from Portland recently. They spent the night investigating the local restaurant and bed-and-breakfast, built in the early 1920s by J.D. Tennant, a town founder and the first general manager at Long-Bell Lumber Co.

Carol Ann Carnese, a Castle Rock native who is a relative newcomer to the occult team, alerted fellow ghost hunters to the site, now owned and operated by Reuben Grendahl of Longview.

Carnese got into exploring the spirit realm after experiencing it in her Portland home.

"I would read everything I could get my hands on. Tried to face it, find it, whatever I could do," she said. Until she found PORT, she hesitated to share her paranormal passion.

"I didn't even tell my parents," she said. "I didn't want to tell anybody because they were going to think I was crazy. But I've actually had a lot of positive response from people."

Finding a potentially haunted location on her home town was exciting, she said.

Carnese interviewed the staff members and discovered legends about the mansion, while others came from another ghost group that had investigated in the past.

"This is my baby," she said the day of the investigation. "I know it like the back of my hand."

Stories about the historic location include mysterious screams that echoed from the building and a couple murdered on their wedding night by a jealous ex-boyfriend.

Carnese also dug up explanations for some of the rumors.

In the late 70s, the mansion served as a school for troubled teenage girls, and Carnese heard that the director used to have the young women go outside and scream to release pent-up energy.

She discovered this information while interviewing the son of one of the mansion's former owners who still lives nearby.

Carnese was unable to find any account of murdered newlyweds, however. "I went as far back as I could," she said. "I think that was a story dreamed up by the girls to scare each other."

Other stories involve experiences of current staff members at the mansion.

A woman tidying up one of the bedrooms told of making up the bed, then turning her back, and when she faced the bed again, there was an indentation as if someone had lain on it.

Others talk about a room in which visitors would wake in the middle of the night and see a figure sitting in the window, as if reading.

When the PORT group made a preliminary planning visit, Carnese and other team members explored the chapel area on the mansion's top floor. The architecture there includes images of goats, fish, thistles and other animal life sculpted into the white walls and ceilings.

This part of the mansion is used for weddings, Carnese said, which can carry a "lot of emotion and leave residual energy."

One of the investigators put his phone down in the chapel and hit record.

Armed with their research, the seven-member group visited the mansion in late August for a complete investigation, led by PORT leader Ben Robison. The investigators volunteer their time for the visits. They don't charge a fee, and all work other jobs while they ghost-hunt as a hobby; Carnese, for instance, is a massage therapist.

A former Longview resident, Robison started PORT in 2008. His interest in the paranormal began as a child when he had what he describes as a "weird incident."

He and his father were sleeping in the basement of a house, and young Robison saw a ray of light appear before him.

"It was in the form of almost like a woman," he said. "It dematerialized right there in front of me."

Such occurrences are rare during investigations, Robison said, but the group comes prepared for any instance.

PORT members lugged box after box of equipment into the mansion, hauling it up the stairs, sweat pouring down their faces in the heat.

Robison pored over a case of ghost hunting tools, pulling out a Cold War-era Geiger meter.

"The only way I could test this bad boy is if I took it over Hiroshima or the tsunami-affected areas of Japan," he joked.

A glorified laser pen offered its user the ability to cast a grid of light on a wall or ceiling. "This device will allow us to see things pass in front of it," he explained.

A digital thermometer helps the group monitor temperature fluctuations, he said, which can indicate paranormal activity.

Group members scurried through the mansion, hooking up infrared cameras in the areas Carnese had heard about.

In the basement, a "fear cage" got a camera of its own.

"I was talking with one of the waitresses who was telling me that when they are down in this corner doing laundry, you just get the feeling that someone is watching you," Carnese said. "The hair on the back of your neck stands up."

The area includes an entire wall of electrical boxes, as well as phone and computer lines, all of which emits an electromagnet field (EMF).

"We call it a fear cage because you're completely surrounded, and all of these things are going to set off high EMF levels, which can make you nauseous, dizzy and give you a paranoid feeling," Carnese said.

Wiring the cameras requires yards of electrical cord, covered with tape to keep investigators from tripping in the dark.

Just prior to turning out every light in the building, the group members met to go over details. Groups of five or six would visit each area of the mansion while three or four sat at the command center, where a bank of monitors streamed video from each of the cameras.

The people in the groups are encouraged to speak normally during the investigation in the hopes of sparking contact with spirits, while those who watch the monitors maintain silence, save for the occasional whisper so that their voices aren't caught by the tape recorders being used by the investigative teams.

Even though the exploring groups talk, they don't try to provoke spirits, Robison said. "If there's a spirit there, it's there. You don't want to make it mad."

As the first group of investigators left, Robison and two other members stayed behind to watch the monitors.

Bugs and dust sometimes showed up on the monitors, looking like ghostly orbs to the inexperienced eye. Robison and his crew have trained to tell the difference in movement and shape between everyday and paranormal phenomenon.

Robison said he suggests reading material for all who join the group. They also get "on-the-job-training" from more experienced investigators, he added.

"It's really fun to sit at command center and watch," Carnese said. "Sometimes you can see things on those cameras that we can't see when we're out there."

Team members alternated through the night, serving as both watchers and seekers. They quit as dawn broke.

The jury is still out on the status of haunting at the mansion, he said, since the video and audio results from the investigation are still being analyzed. Generally, it would only take about a month for that to occur, but the organization — which performs investigations free of charge — was busy with a residential case that involved a child.

Despite not having any "direct" spirit contact, "the team pulled together and made it an exciting experience," he said.

Just getting to spend the night in the historic Longview landmark was gratifying," Carnese said, especially with kindred spirits.

"It's just so methodical, thought out and planned out," she said. "It's nice to be part of a team. It's not just you, thinking you're crazy."

The Paranormal and Occult Research Team is one of a handful of such organizations based in Portland. Their web site is www.paranormaloccultresearch.com/.

Inside the US federal prison hit hardest by Covid-19

Photographer Kristy Hruska-Larson tagged along with the Paranormal and Occult Research Team (PORT) to an investigation of the Rutherglen Mansion. On the stair landing, she checks out the windows of the mansion, which was built in 1923.

Casey Lunsford, left, and Carol Ann Carnese of PORT set up an infrared camera in one of the areas the group investigated.

Spotlights outside the Rutherglen Mansion cast an eery glow on the white walls of the building.

PORT member Carol Ann Carnese did the research for the group’s visit to the Rutherglen Mansion in Longview. In the bridal room on the top floor of the building, she explained the story of a young couple who haunt the mansion.

PORT founder and leader Ben Robison shows a laser pen that casts a grid on any surface, which allows investigators to gauge the size of an apparition. PORT member Casey Lunsford looks on.