`Bummed out': SpaceX launch scrubbed because of bad weather

No easy way down from Mount St. Helens
0 comments
Share this
×

“Is there an easier way to get down?” Two women packed into puffy coats voiced the question we were all thinking. It was nearing 3 p.m. and the two female climbers (who had their sights optimistically set on the summit) were still far from reaching the crater rim of Mount St. Helens. Getting up should have been their first thought.

It was my first time climbing the mountain, and I was well into my descent from the summit alongside my hiking cohorts – a couple coworkers and the two volunteer guides who led our climb – when the women stopped to question our guides. We were busy dragging our tired, shaky limbs downhill, focusing on the freshly etched glissade paths as the silver lining to the long hike toward the tree line. The two women were poised against a couple large boulders, attempting to gauge whether they should keep going or begin their descent.

It was a sunny June day, and the skies were mostly clear, offering a breathtaking panorama of the Three Sisters, Mount Hood and Mount Jefferson mingling among white wispy clouds. Much of the landscape was still draped in snow, with the Monitor Ridge rocks protruding in long lines, giving climbers the choice of trekking on the packed snow or climbing among the loose rocks.

One of the guides suggested the women hike another 40 minutes to a stopping point near a GPS recording station landmark before turning back, reminding them they’d have to retrace whatever distance they climbed upon their descent.

My thoughts were very much in the same vein as the female hikers. Early in the hike, I naively inquired how close we were to the summit within the first couple hours of the climb. Not close, I was told.

“Everyone is looking for an easier way up and an easier way down – of which there is neither,” offered Sharon Steriti, a climbing ranger for the Mount St Helens National Volcanic Monument. Her wisdom – garnered from her more than 17 years working as a ranger – rang true during those last 1,000 feet, during which I dug my already fatigued feet into piles of ash, marching upward even as the loose pebbles below my boots scrambled downward.

During the climb toward the summit, we took our first break on Monitor Ridge, the main rocky trail that extends up part of the mountain. We sat beside large boulders to block the wind, which blows stronger the higher you climb. I watched hikers as I gulped water and rested my legs. It was our first break since leaving the tree line, and it left our group somewhat refreshed, still optimistic about climbing this “big hill.”

Our final break before the final push to the top, however, was not so welcome. The momentary rest gave my muscles time to tighten, making it difficult to journey on. My once hopeful questions adopted a less confident tone. Do you think we’ll make it to the summit by 1 p.m.? How is our pace?

Other times, such as when we climbed the so-called “vertical beach,” I kept my questions to myself with my eyes fixed on my boots, thinking about this story and my options for artfully telling readers I hadn’t reached the summit. I couldn’t think of anything, so I kept going.

I started the climb at a steady pace, but the last stretch took on the rhythm of a quick dash followed by a too-long rest. It was then that Steriti reminded the group of the rest step.

Steriti advised early in the climb to avoid short sprints followed by long rests. Instead, she suggested following each step forward with a quick rest. This technique alone got me through the final push, which was made more difficult by the fact that, as a first-timer, I couldn’t properly gauge how close I was to the summit, which was made invisible by the clouds.

As many know, Mount St. Helens is a non-technical climb, meaning beginner climbers lacking fancy equipment can make the ascent. While true, that doesn’t make it an easy climb. Sun-burnt skin, fatigued limbs, shoulders bruised from backpack straps and rough hands from gripping rocks are all marks of the climb. I came prepared with a waterproof jacket, gaiters to keep snow from dampening my socks, layers (probably several too many), and enough water and snacks to keep me nourished on the round-trip climb. What I wish I had: trekking poles, which would have provided more balance while ascending. I borrowed a single trekking pole for the descent, which I mostly used to brake at the end of each glissade.

One of my hiking partners decided to wear shoes that’d be better suited for a basketball court than a snowy, rocky, ashy landscape. But as we were all first-time climbers, these were merely lessons learned and egos humbled by the somewhat unforgiving landscape of this “big hill.”

Thighs on fire, we eventually reached the summit after six hours of climbing. We took in views of Mount Rainier in the distance and Spirit Lake in the foreground. We retired our backpacks to the icy snow and enjoyed the silence at the summit. Clouds moved in and out, obscuring our view before quickly reintroducing it.

After taking some time to enjoy the summit, we finally began our descent, which Steriti noted can sometimes be more difficult than the climb, especially if glissading isn’t an option. Luckily for us, it was an option.

The first few steps of the descent were on icy terrain. The guides instructed us to dig the front of our boots in the ice with each step to maintain our grip on the slick snow. There were countless times I couldn’t seem to get my footing just right, leading to quite a few falls in the beginning.

When we left the icier part of the descent, we took full advantage of the many glissade paths that were already carved in the snow from previous hikers, making sure to avoid those too near the rocks.

With the tree line finally in sight, I thought about the question those women asked midway through our descent. By this point, my gaiters were falling off, my legs were aching at the joints and my damp gloves were serving more as a freezer for my fingers than as a layer of warmth.

“Is there an easier way to get down?”

Sarah Grothjan is a Features writer and online producer for The Daily News.

For information on climbing Mount St. Helens, which requires a permit, see http://mshinstitute.org/index.php/climbing/index

A comprehensive look back at the 1980 eruption with historic photos and editions of The Daily News. Interactive features include time-lapse sa…

The Mount St. Helens “North Climb” route under development will be open only to those who pay $300 for a guided tour again this summer. 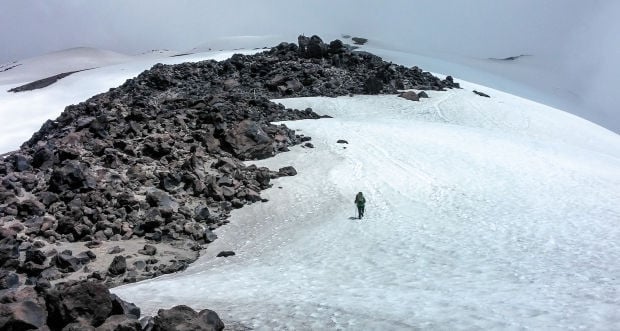 A lone hiker climbs the Monitor Ridge route up the south side of Mount St. Helens as clouds close in around the crater rim.

The view behind climbers hiking up Monitor Ridge on Mount St. Helens. 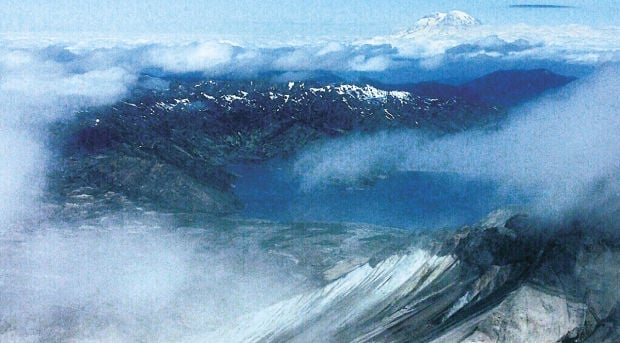 Spirit Lake peeks through a break in the clouds and Mount Rainier looms over the top of them when viewed from the south rim of the crater at Mount St. Helens.