On Aug. 1, 1947, an Army B-25 bomber crashed in Rose Valley, killing two of the four men aboard. That’s one subject in a new book, “The Maury Island UFO Incident,” that can be verified as factual.

However, many of the incidents discussed in the book are unsolved mysteries, if not outright fabrications:

• Reported sightings of UFOs over Mount Rainier and what is now known as Vashon Island in Puget Sound in the months before the plane crash.

• A visit by a Man in Black to someone who witnessed the UFOs spewing mysterious metallic slag.

• The early death of a hard-hitting newspaper man who asked the Army tough questions about the UFOs and the plane crash.

• A key figure who claimed to have seen the UFOs — and also was spotted on the Grassy Knoll in Dallas from which some people insist shots were fired at President John F. Kennedy.

Yes, conspiracy theories fly through the “The Maury Island UFO Incident” faster than an alien spacecraft over Roswell, N.M. (Those famous encounters actually occurred a few months after our 1947 Northwest UFO sightings.)

The book by Charlette LeFevre and Philip Lipson of the Northwest Museum of Legends and Lore in Seattle is a haphazard collection of reprints of newspaper and magazine articles and biographies of key players. Despite the book’s disorganization, “The Maury Island UFO Incident” makes for entertaining, if not always believable, reading.

The authors visited Kelso in 2007 and 2008 to see the B-25 crash site and interview someone who visited it in 1947. James Greear, who lives near the crash site, donated a piece of the crashed airplane to the Cowlitz County Historical Museum.

Though pieces of the B-25 still litter the woods along Goble Creek, most of the mystery took place in the Tacoma area.

According to the book, on June 21, 1947, Harold Dahl and three other people were in their boat off Maury Island (now called Vashon Island) when they reported seeing six flying saucers dumping hot, black, lava-like rocks on the water and land. Dahl told the supervisor of his private beach home security company, Fred Crisman. The next day, a Man In Black came to visit Dahl and told him to keep quiet if he loved his family.

Two days later, Kenneth Arnold, a pilot who ran a fire equipment business, took off from Chehalis, and reported spotting nine UFOs tooling along at more than 1,000 mph between Mount Rainier and Mount Adams. On July 5 of that year, the crew of a United Airlines DC-3 also reported nine flying discs near Mount Rainier. The media picked up the stories, which resulted in even more sightings of things that appeared to have come from outer space.

Crisman is reported to have given the two military men a box of the mysterious debris allegedly dropped by UFOs around midnight July 31. The two pilots took off from McChord Field shortly after 2 a.m., en route to a base in California. At 2:35 am, several people witnessed the B-25 bomber on fire, circling over Kelso and Longview, and police raced to the crash in Rose Valley.

An article in The Daily News (Longview) that afternoon didn’t mention the UFO theory, but at the Tacoma Times, Lantz was told by anonymous callers that the B-25 was carrying flying disc fragments and that “McChord Field officials had stated it was shot down or sabotaged.” A caller had inside information, including the names of the pilots who had died, before the information was released to the press.

Lantz died six months later at age 29 of streptococal meningitis -- but reportedly only after two more Men In Black had come to urge him to abandon the flying disc story.

Arnold kept the story alive with his 1952 book “Coming of the Saucers!” and his involvement with UFO believer groups.

Crisman, who had allegedly collected some of the UFO slag, worked in a number of jobs thereafter, and according to the book, was questioned in 1968 as part of New Orleans District Attorney Jim Garrison’s investigation of the JFK assassination, with an implication that Crisman was a CIA operative. If that’s not enough, Crisman was identified during 1978 Congressional hearings about the assassination as a man standing on the Grassy Knoll by Dealey Plaza in Dallas on Nov. 22, 1963. However, Crisman says he was teaching school in Rainier, Ore., when the president was killed.

So did aliens really check out the Northwest in ’47? Could bits of rock from outer space still be buried in the forest along Goble Creek?

The authors of “The Maury Island UFO Incident” don’t claim to have proof that the saucers were real, but the many unanswered questions they raise seem to lead that way.

LeFevre and Lipson offer another slightly more plausible theory: The Atomic Energy Commission was looking for a way to get rid of radioactive waste from the Hanford facilities and decided the easiest way would be to dump it from planes into Puget Sound. But the Army would have had to have been blind to this to put a load of radioactive rocks into a plane and take off from McChord, and this theory doesn’t explain the Mount Rainier saucer sightings.

Tom Paulu is a features writer for The Daily News. He covers Outdoors and Entertainment, among other things. Reach him at 360-577-2540 or tpaulu@tdn.com.

Visit the website for the Northwest Legends Museum, organized by Charlette LeFevre and Philip Lipson, author of “The Maury Island Incident.”

”The Maury Island UFO Incident,” self-published by Charlette LeFevre and Philip Lipson, is available at Amazon.com for $19.80.

Film in the works

The mystery of Maury Island is being made into a movie as well a book.

Charlette LeFevre and Philip Lipson, who wrote the new book about the incident, were consultants for the movie.

Information about when the movie will be released is not available.

Watch Now: How to plan for retirement

Watch Now: How to plan for retirement

Watch Now: How to keep your phone data safe from hackers

Watch Now: How to keep your phone data safe from hackers

The songs on Rich Hinrichsen’s new jazz album have been in his head for as long as 35 years. One of them he composed in the band room of Mark … 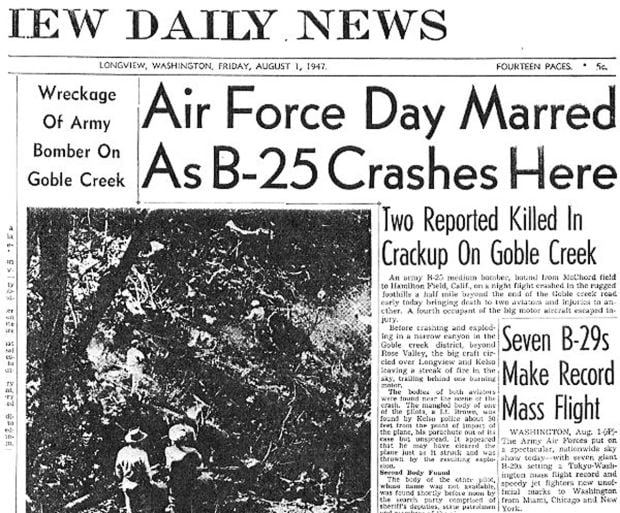 The front page of the Longview Daily News the afternoon of the August 1947 crash. 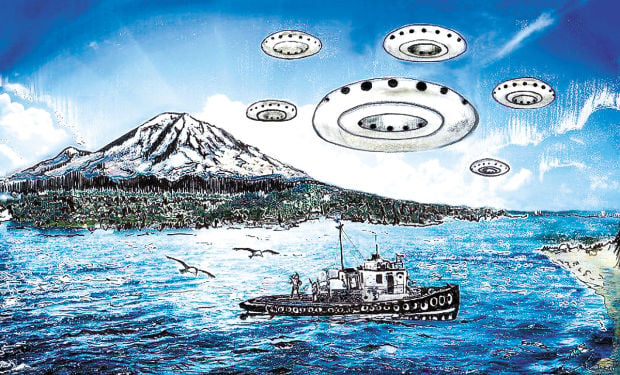 An illustration from “The Maury Island UFO Incident” by one of the book’s co-authors, Charlette LeFevre. 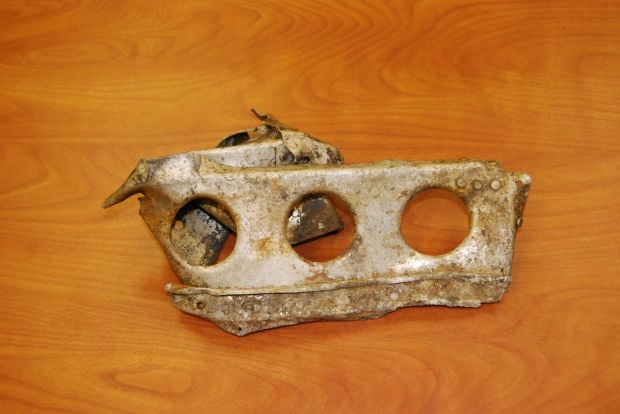 A piece of the crashed B-25 bomber donated to the Cowlitz County Historical Museum.