The Kalama River still shows promise and the Cowlitz River is maintaining at a “buy.” Meanwhile, Merwin reservoir is greatly improved and looks like the adjustment period may be over. This time of year travelling in a couple different directions to the boundaries of Southwest Washington presently offer some different opportunities.

REMINDER: Please verify the regulations before fishing any body of water

Dave Mallahan with Dave’s Guide Service is still fishing the Cowlitz. When I spoke with him on Monday, he stated that he caught five silver salmon and kept two while still fishing below the I-5 Bridge. Current regulations for the catch area from Lexington Bridge to Mill Creek, you can retain up to four adult coho. You must release all salmon other than hatchery coho. Those prohibitions include all wild rainbow and wild cutthroat trout.

This Wednesday I counted three drift boats working below the hatchery. There was virtually no bank activity. There are reports of hit and miss fishing success up in the canyon, but there is no fish activity in the lower portion of the river that I noted.

The WDFW creel checks for the Kalama didn’t fare well last week. Twenty-one bank rods released only one Chinook, with four rods on two boats reporting no catch. This is a considerable downturn in the report from the previous week.

Pressure is soft right now. Fifty-eight wild winter steelhead were intercepted at the hatchery during the last seven day period. That count is up from four the week before, which could be a good omen. Hatchery winter steelhead have yet to appear in the official escapement totals.

Angler checks by the Washington Department of Fish and Wildlife last week showed 65 bank rods kept five coho and released one coho, while six boats with 15 rods kept one coho.

The river did get a boost of hatchery coho back. However, I haven’t heard any confirmed reports of fishing success.

Walleye fishing in the Irrigon area is outstanding right now if you don’t mind the commute. It’s a fun fishery, I just wish it were closer. Catch and release sturgeon fishing might be a good option. If you don’t have any go-to sturgeon spots, this time of year start by focusing on water that is downstream from grain elevators or tributary mouths.

Nathan at Sportsman’s Warehouse in Kelso spent a couple days chum fishing recently and his group caught a bunch of zombie chum. There are a few freshets of bright coho still moving through below the Highway 4 Bridge, and there is some pretty good bank access in that area, although it does tend to get crowded.

Merwin—These waters are a bright spot this week. I’ve heard several different accounts from folks over the past several days, so much so that I’m going to head out myself on Saturday. Initially I’d planned to go out on Thanksgiving morning, but the wind forecast was a little too much. Saturday looks better. With my open boat I can handle the rain, but not the beastly wind on Merwin.

Swift – A subscriber brought to my attention that the only remaining open launch on Swift is now closed. You can get updated information about reservoir conditions online but it is not updated regularly, and they are virtually impossible to reach by phone. If anyone has additional information or a contact, I would truly appreciate a message.

Riffe – Nathan from Sportsman’s Warehouse tells me that the launch is open again. He has not heard any specific fishing reports.

All the lakes stocked in our area (Klineline, Battle Ground, Kress and South Lewis County Park) are fishing well. There are most certainly some brutes in the mix as I observed today. During my stop at Kress Lake there was some significant trout fishing going on.

Razor Clams—The latest razor clam news is not good. Due to ongoing marine toxin issues on coastal beaches all digging days have been postponed until further notice.

“Unfortunately, we need to wait before we can get back to digging razor clams, but the good news is the clams are just getting bigger and fatter,” said Dan Ayres, WDFW coastal shellfish manager, in a press release.

Cutthtroats – Sea-run cutthroat fishing in the Tacoma area of South Puget Sound and north up into Hood Canal is very good right now.

Get ready for a few days of rainy unstable weather. Watch for winds in the gorge and on the reservoirs.

Ian Carter is an experienced angler and reporter for The Guide’s Forecast, who hits the road in pursuit of the best bite and the latest fishing news. Additional reports from around the region can be found online at TheGuidesForecast.com.

The Guide’s Forecast: Prospects for surf perch, Cowlitz and Kalama silvers perk up

While the Lewis is in a holding pattern, the outlook for the Kalama looks promising. Those who live in the southern reaches of the coverage ar…

The expected heavy rains for the weekend put us on a wait and see approach for most river levels and fishability for the foreseeable future. T…

The Guide's Forecast: Rivers rounding back into shape after downpours

The heavy rain forecast didn’t disappoint, but the extent of rainfall caught some people by surprise. Still, some folks found fish even with t…

Never give your dog these holiday foods

Never give your dog these holiday foods 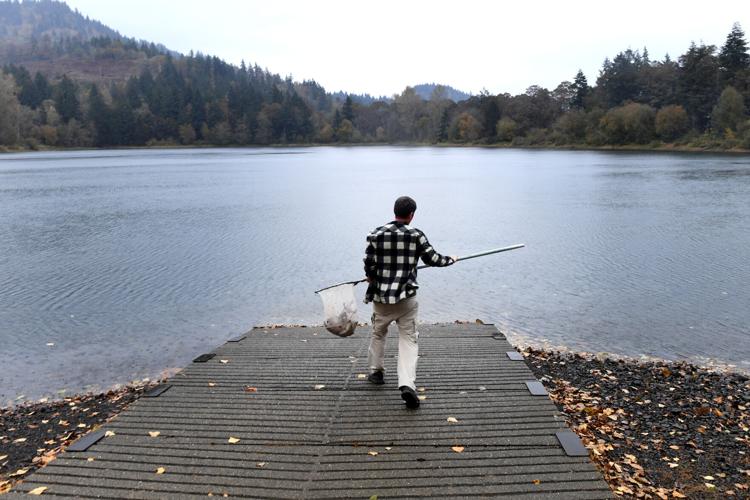 Fish and Wildlife hatchery specialist Tim Summers throws a net of rainbow trout in Kress Lake on Tuesday, Nov.22, in Kalama. Every year around Thanksgiving the WDFW fills 20 different lakes or ponds with fish for holiday fishing. 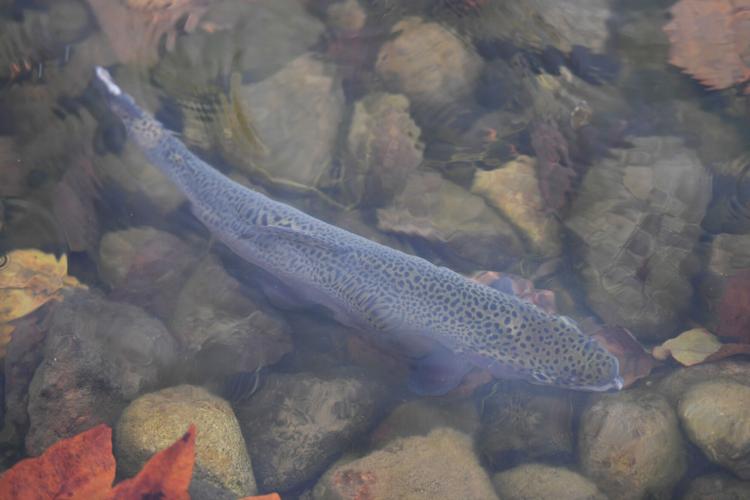 A rainbow trout swims in the shallow water of his new home, Kress Lake, after being transported from Mossyrock Trout Hatchery on Tuesday, Nov. 22, in Kalama. Anglers must have fishing licenses to participate. 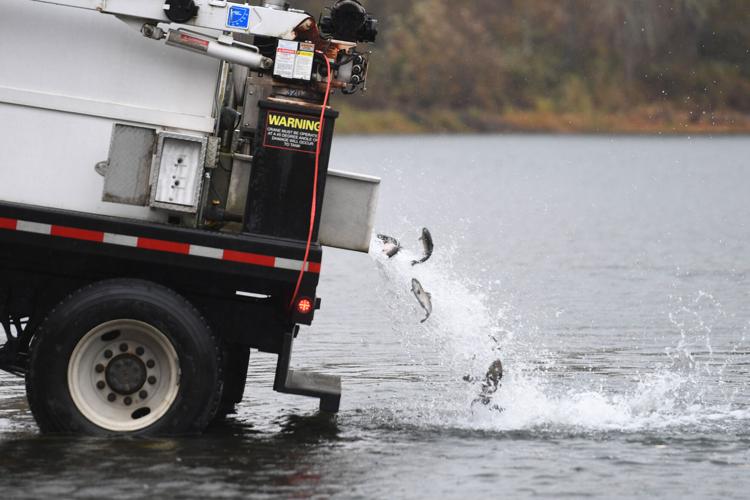 A thousand fish are dumped into Kress Lake in Kalama on Tuesday, Nov. 22, in preparation of Black Friday's fishing event. The Rainbow Trout being transported weigh up to 3 pounds.