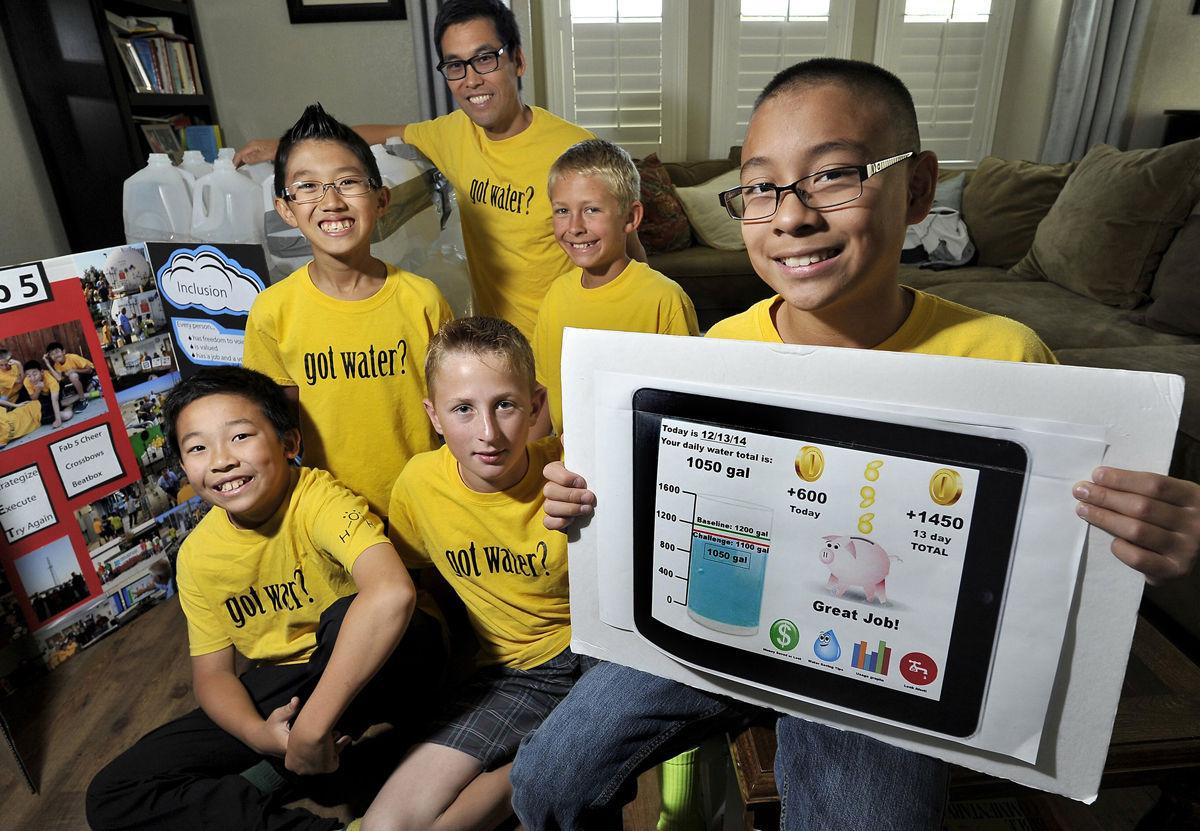 The Fab5 team of Riverview Elementary 6th graders from left, front, Evan Murai, Corbin Beaty, Noah Astitio; back middle from left, Daniel Shin, Jeffrey Forbes, and coach Kevin Murai, back. Noah holds an illustration of what their water app would look like that would allow City of Fresno, Calif., water customers to track their water usage per day. City Hall is now interested, and City Manager Bruce Rudd says the city may invest $25,000 to make the idea a reality. 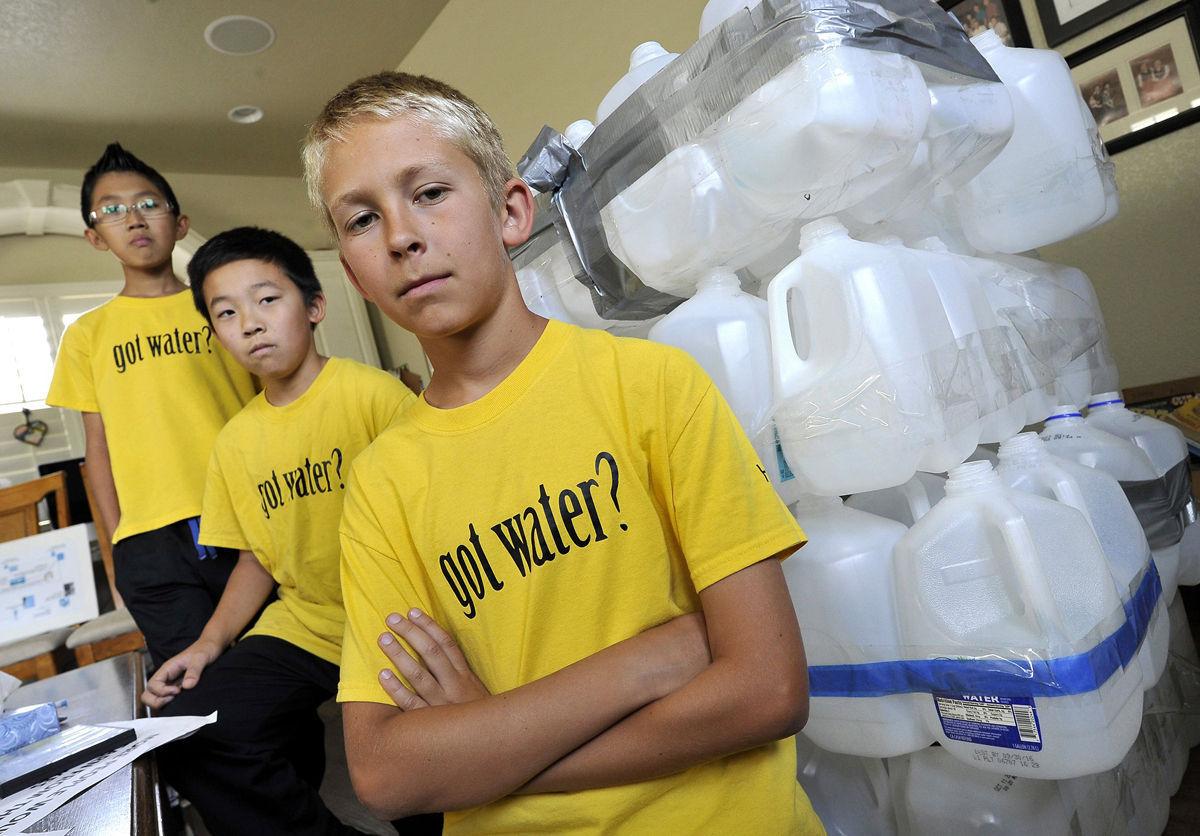 From left, Evan Murai, Daniel Shin and Corbin Beaty, part of the Fab5 team of Riverview Elementary sixth-graders, pose for a photo in their team t-shirts in Fresno, Calif. The team of 6 have designed a water app that would allow City of Fresno water customers to track their water usage per day.

FRESNO, Calif — Drought-plagued Fresno may soon get a lot smarter about its use of water thanks to a handful of local sixth-graders with a passion for learning.

Noah Arsitio, Corben Beaty, Jeffrey Forbes, Evan Murai and Daniel Shin are Riverview Elementary School students headed to St. Louis later in April to match their engineering skills and knack for research against some of the best young minds in the world.

They call their team The Fab Five. They aren’t the first Fresno-area kids to compete in the FLL (FIRST LEGO League) World Championship and probably won’t be the last.

But The Fab Five almost certainly is the first local team in this specialized world of intellectual battle to come up with an idea that knocked the socks off Fresno City Hall.

The Fab Five pitched the idea to the City Council on March 26, employing rows of empty one-gallon plastic water bottles to symbolize the savings goal.

Kevin Murai, Evan’s father and The Fab Five’s coach, said the youngsters made the most of their brief time in the council spotlight.

“I was hoping something good would come out of it because this drought is serious,” Murai said. “But I didn’t think it would be that quick. When the city manager started talking about what it would cost and how we need to meet, I was shocked. I said to myself, ‘What?’”

Both sides have regained their poise. They’re slated to have their first chat about turning vision into reality on April 20.

The backstory begins with FIRST, a nonprofit of international stature devoted to helping youngsters nurture their passion for science, technology, engineering and math.

Next is Central Valley Robotics, a division of Clovis Unified School District and the local partner with FIRST.

Then there is FLL — FIRST LEGO League. The third word is the key. FLL is the vehicle that enables teams of young technology-minded students such as The Fab Five to compete throughout the school year in a structured manner.

Ultimately, the best emerge. The Fab Five survived a series of local FLL competitions to earn a trip to the April 22-25 World Championship.

These competitions have three parts. The first involves robots. The third involves core values. Not much there that might deal directly with city policy.

The second part is a different story.

Riverview Elementary is a Clovis Unified school in northeast Fresno. Kevin Murai said his son recruited four friends at the start of the 2014-15 school year to form The Fab Five. Work on the new FLL season started in August.

The second part is called the project. This year’s project focuses on learning. The team had to come up with a way to help people learn something in a way that improves their lives.

The Fab Five and coach first thought about swimming. It’s fun and can save lives. Then everyone figured there’s nothing new to learn. Scratch swimming.

That’s when the news came to the kids’ rescue.

City Hall in the fall found itself in the midst of an unexpected political fight over water.

Mayor Ashley Swearengin for several years had wanted to fund a major overhaul of the city’s water system. The cost was more than $400 million and included a new surface water treatment plant in southeast Fresno.

The overhaul was the only way Fresno could ensure a safe and reliable supply of water for the 21st century, Swearengin said. Water rates will rise, she acknowledged, but the future depends on such sacrifice.

Critics said the mayor’s project was too big and expensive. One thing led to another, and City Hall by late summer was forced to put the project on hold until a series of public forums was held.

The idea was that the forums would help educate Fresnans about the complexities of water supply and demand. Fresno then could decide with wisdom whether to embrace Swearengin’s plan. In the end, the City Council did approve a $429 million project.

The first forum was on Sept. 29 at Hoover High School. Kevin Murai and The Fab Five were there.

And forum participants learned that City Hall computers are linked to the water meters of every residential, commercial and industrial customer. Information constantly flows into the water division. Customers, though, get only a monthly bill telling them how much water they used in that period.

Kevin Murai, a Caltrans transportation engineer, got The Fab Five together after the first forum.

Everyone put their heads together and decided there was a missing piece to City Hall’s conservation efforts.

City officials have plenty of advice on how to save water. Fix leaks. Make sure the dishwasher is full before starting. Follow the mandatory landscape-irrigation schedule. The tips go on and on.

But water, humans and time make for a funny combination. Habits are hard to break. People want to do the right thing, but water bills with that monthly usage number don’t come around all that often. It’s hard to remember what might have gone wrong days or weeks earlier if that number refuses to go down.

The irony was not lost on The Fab Five. The city knows how much water Jane Doe uses every day, but Jane doesn’t. Yet, it’s the water-consuming behavior of Jane that City Hall most wants to change.

The Fab Five’s solution: An app that allows a consumer to tap directly into her water account at any hour of any day.

The light snaps on in the head of civic-minded (and cost-conscious) Jane — next time use a broom on the patio.

The Fab Five turned their water forum epiphany into hours of research. The kids talked to app experts and water division officials. They created charts to identify the flow of information. They thought of a game-like incentive to reward diligent conservationists.

The result was twofold.

The Fab Five had an answer for part two of their FLL challenge. The team marched through the competition and earned the trip to St. Louis.

And the kids decided it isn’t enough in a democracy simply to be smart. They had to learn to be political if they wanted to help the people learn to help themselves.

With Coach Murai leading the charge, The Fab Five got hold of the office of Assembly Member Jim Patterson, R-Fresno. Patterson’s office got hold of the office of Council Member Clint Olivier. Then it was the turn of Council Member Lee Brand, who represents northeast Fresno. Brand got Council President Oliver Baines to reserve a few minutes in a busy March 26 council agenda for a bunch of sixth-graders.

The Fab Five went to the council chamber microphone at the same time California was chalking up the worst year of drought in recorded history and Gov. Jerry Brown was preparing to mandate unprecedented conservation measures.

The Fab Five had the perfect audience. The kids’ performance even won them a one-on-one meeting with the mayor.

Rudd last week said it’s too early to say what form a City Hall-Fab Five partnership might take or how the youngsters’ idea will be tweaked to work in the real world. The cost might be thousands of dollars. City Hall could help, Rudd said. Outside investors might want to pitch in, he added.

“It’s going to be a learning opportunity for all of us,” Rudd said. “I’m looking forward to it.”

The Fab Five is looking forward to the real payoff of their app idea.

“It helps save water,” Daniel Shin said. “That helps people.”

The Fab5 team of Riverview Elementary 6th graders from left, front, Evan Murai, Corbin Beaty, Noah Astitio; back middle from left, Daniel Shin, Jeffrey Forbes, and coach Kevin Murai, back. Noah holds an illustration of what their water app would look like that would allow City of Fresno, Calif., water customers to track their water usage per day. City Hall is now interested, and City Manager Bruce Rudd says the city may invest $25,000 to make the idea a reality.

From left, Evan Murai, Daniel Shin and Corbin Beaty, part of the Fab5 team of Riverview Elementary sixth-graders, pose for a photo in their team t-shirts in Fresno, Calif. The team of 6 have designed a water app that would allow City of Fresno water customers to track their water usage per day.