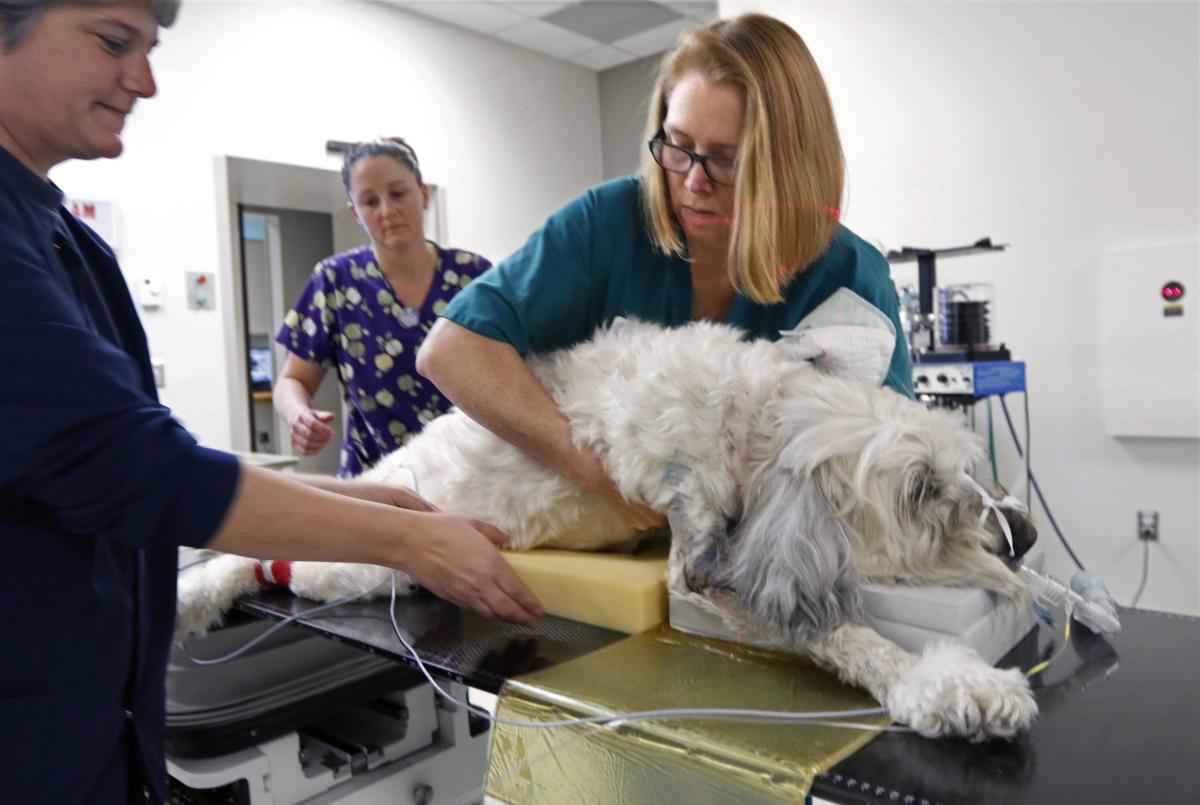 On March 3, it was the ninth of 18 radiation treatments for Buddy after a soft tissue sarcoma was removed recently from his right front leg. 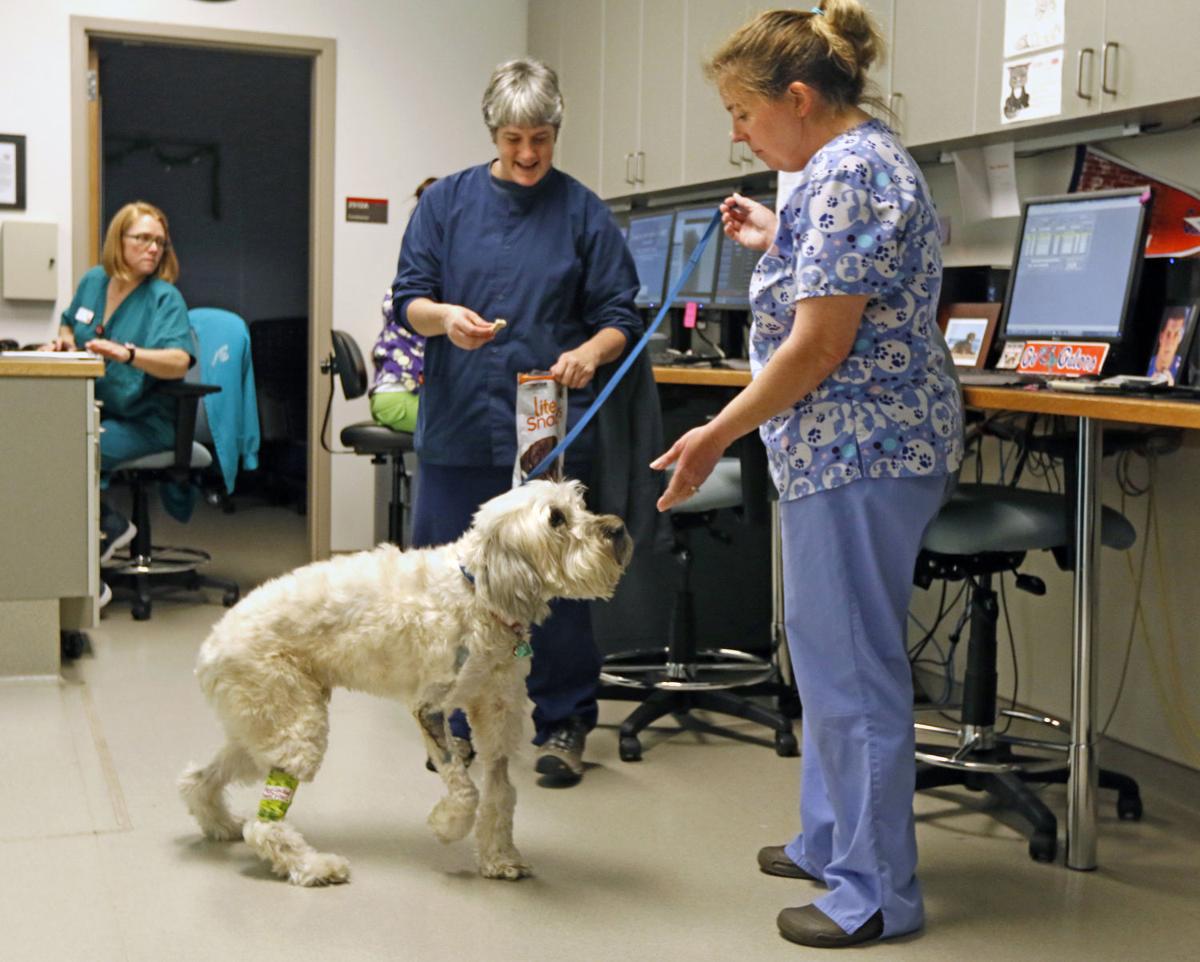 Almost a year and a half ago, her cancer was essentially cured during a clinical trial at N.C. State University’s vet school.

Now Eliza and other canine patients might teach researchers something about cancer in their two-legged friends.

The Duke Cancer Institute and NCSU’s College of Veterinary Medicine have formed the Consortium for Canine Comparative Oncology, or C3O for short. Recently, more than 150 doctors and researchers gathered in Cary, N.C., for a symposium to kick off the new partnership.

Doctors at Duke and NCSU have worked together before on individual studies, but a formal relationship is expected to spur more collaboration, along with some initial funding from both universities to get projects started. They hope to raise money to keep the work going.

Cancer experts and drug developers increasingly believe they can create and speed successful treatments in dogs, with implications for certain types of human cancers. The field of oncology is moving away from toxic chemotherapies and more toward medicines targeted to tumor mutations and treatments that rev up the immune system.

Dr. Michael Kastan, executive director of Duke Cancer Institute, said the time is right to compare treatments in people to treatments in animals other than mice, which are intentionally given diseases in a lab setting. Dogs and people live in the same environment and they share some similar types of tumors that spontaneously occur.

And because many pet owners don’t have easy access or the financial wherewithal to seek cancer treatment for dogs, there should be a large group of volunteers eager to participate in clinical trials.

Kastan said half of all dogs over the age of 10 will die of cancer. It’s generally a disease of aging, similar to that in humans. There are differences, most notably that people smoke and get a whole host of cancers that dogs don’t get. At the same time, certain breeds of dogs have a higher incidence of cancer. Kastan said doctors can learn more by studying the genetics of those breeds.

Eliza the Labrador didn’t smoke but developed what appeared to be a terminal case of mouth and nose cancer.

One warm day in 2014, Eliza’s owner, Lynne Murchison of Charlotte, noticed that the beloved family dog had a swollen snout. At first it seemed like a simple bee sting. But when she took Eliza out for a walk, the dog started bleeding from her mouth.

Later, a veterinarian delivered the bad news. Eliza had maybe five weeks to live. “I was destroyed,” Murchison said.

In the wee hours of a sleepless night, she scoured the NCSU vet school website, where she scrolled through various clinical trials and hit upon one for oral tumors. Soon Eliza was in Raleigh, N.C., the first dog enrolled in that particular study.

First, veterinarians implanted tiny particles in the tumor, then injected her with drugs and small doses of X-rays that converted to UV light. It’s a new treatment called Immunolight Therapy. The light activates drugs in the tumor, causing an immune response against the cancer.

Eliza had nine treatments spread across a month. At first the dog struggled with a bad reaction to one medication. Her teeth were loose, she had trouble eating and she began to lose weight. “I didn’t think she was going to make it through,” Murchison said.

Then about halfway through the treatment, Eliza began to secrete a mucous from her nose. In the words of Dr. Mike Nolan, Eliza’s oncologist at NCSU, the tumor “literally melted away.” The swelling went down and she started to eat again.

Last fall, about a year after the treatment, Nolan did a CT scan on Eliza and found no cancer.

Murchison said her dog suffers from hip displasia, common in older dogs. But she walks three times a day.

“She’s fat, she loves to eat,” Murchison said. “She’s just a happy girl and there’s just no sign of the tumor.”

Nolan said that clinical trial ended a few months ago with encouraging outcomes. Next, doctors will try the same treatment on dogs with oral melanoma, a terrible disease similar to mucosal melanoma in humans. Lessons can be learned.

Kastan sees opportunity to reduce the cost and time of testing therapies in humans. Doctors can figure out how to perfect the methods and drug cocktails in dogs.

Murchison said she’d like to think of Eliza helping humans down the road, while she continues to outlast the average lifespan of a Labrador.

“I think it’s absolutely the right thing to do,” she said of the clinical trials. “Where else are we going to learn these things?”

Cities with the largest homes

Cities with the largest homes

Look up for farmland or garden space in the city

NEW YORK — Looking out across an urban or even some suburban skylines, most people see an expanse of rooftops.

On March 3, it was the ninth of 18 radiation treatments for Buddy after a soft tissue sarcoma was removed recently from his right front leg.