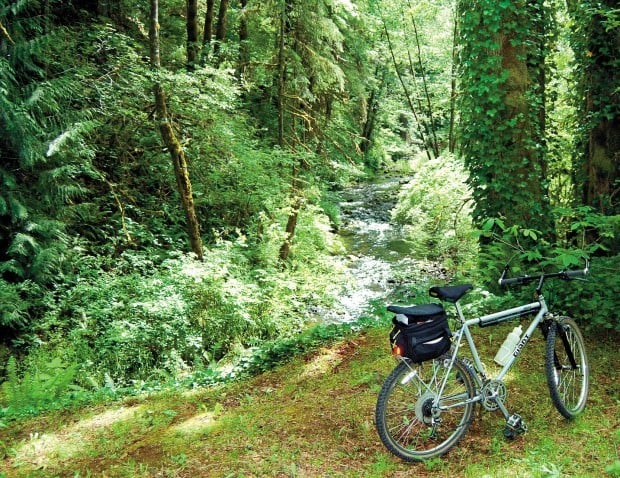 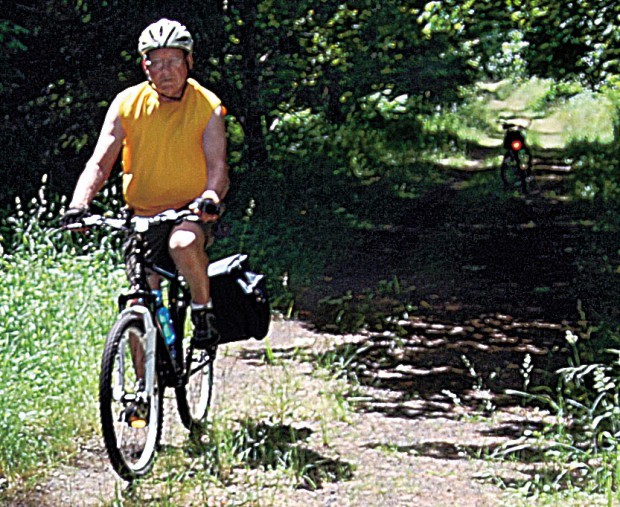 Dave Warlick, 81, rides the trail about once a week.

By Tom Paulu / The Daily News

SCAPPOOSE, Ore. — I had ridden my mountain bike up the Crown Zellerbach trail for a couple of hours, past houses and along pretty little creeks. Now, heading deep into the woods, I thought there was no one to hear my panting as I pumped up the steady grade.

Then Dave Warlick appeared on his bike, heading downhill.

I asked Warlick if he rode the trail often.

"About once a week," replied the Scappoose resident. "I'll be 81 in a few days," he added.

I felt humbled — and convinced that the trail is suitable for young and old, as long as they have a spirit of adventure.

The Crown Zellerbach trail follows an old, logging railroad grade for more than 20 miles from Scappoose to a point near Vernonia. Though it's not yet as well-marked or maintained as other rails-to-trails routes in the region, a recent development makes the CZ trail much more attractive. Columbia County has installed a bridge over Alder Creek, which is about halfway up the trail and previously forced bikers to cross on a slippery log.

The trail has a venerable history.

It began as the Portland-Southwestern Railroad in the early 1900s. The railroad carried logs from Vernonia to Chapman Landing on Multnomah Channel from around 1905 to 1945, passing through a 1,712-foot-long tunnel at the Nehalem Divide.

Crown Zellerbach purchased the property, removed the tracks and converted the route to a logging road, bypassing the tunnel. Hancock Timber later took over the road, and Columbia County purchased it in 2004. Development as a trail for walkers, bicycle riders and horse riders has followed in phases since then.

The county has spent about $1 million on trail development, mostly from grants from other agencies, said Glen Crinklaw, county assistant public works director.

There's no official brochure or map for the Crown Zellerbach trail, and you won't find it mentioned in guidebooks.

However, perhaps because of its proximity to Portland, the CZ Trail is well-documented on several websites. Hikers and mountain bikers have explored the trail end-to-end with GPS units logging numerous way points, and they've created detailed maps on their websites.

Even if you don't have a GPS, the trail is wide and fairly easy to follow, at least the part closer to Scappoose.

Figuring out where to start is a bit confusing, however, because there is no designated parking area at either end.

I skipped the first four miles of the trail, which pass through industrial and residential parts of Scappoose. To focus on the more scenic section, a good place to start is at what is now the one official parking area, which is on the Scappoose-Vernonia Highway about two miles west of Highway 30.

From the parking area, the first few miles of the trail alternate between an asphalt and gravel surface; a mountain bike or road bike with wide tires are needed. Farther up, the steeper grades necessitate the low gears of a mountain bike.

Heading uphill, the first half-mile or so of the trail passes behind homes, though it's still woodsy. The trail crosses several county roads, where there would be space to park a vehicle. It also crosses private driveways and in some cases serves as the access to homes. When in doubt, look for the yellow signs telling where the trail resumes.

The new steel bridge crosses Alder Creek, which is three and a half miles up the trail from the parking lot.

Another nice spot to stop is about a half-mile farther, just past where the trail crosses the intersection of Cater Road and the Scappoose-Vernonia Highway. There is a wide flat spot next to a creek which invites snacking and a short ways farther, there is a bench.

There also is a "Posted Private Property" sign to remind riders that land off the trail isn't public. Though some signs suggest otherwise, all the trail is open to the public, Crinklaw said.

It's another half-mile or so to Hale Road, where the trail parallels the highway for a spell. Cows graze on one side while cars rumble by on the other.

Past Chapman Road, the trail veers into the woods and away from the highway.

It was here I met Warlick, who cheerful shared, "This part above here separates the men from the boys."

By this, he meant it gets much steeper than the typically gentle former railroad grade. Historical research explains why. When the original railroad tunnel was abandoned, the road had to take a new, steeper route to Nehalem Divide, which at 1,220 feet elevation is the highest point on the route, or 1,100 feet higher than the parking lot.

I pedaled to the divide, where Pisgah Lookout Road intersects the main highway. The trail continues, passing under the highway bridge, though it isn't clearly marked. After 10 miles of steady uphill pedaling and not being sure of the route, I opted to zip back to my car. It's a lot faster downhill, and I passed several dog-walkers and horseback riders along the way — and set one owl in flight.

From the Nehalem Summit where I turned around, the trail indeed continues for three more miles to another crossing of the Scappoose-Vernonia Highway at Elk Creek. From there it goes two miles farther to Vernonia. People who have done this stretch have reported numerous animal sightings. They also get lost.

"That piece is the most confusing because of all these logging roads coming in," Crinklaw said. He plans to put in more trail markers. Near Vernonia, the route descends a steep hillside known as the "goat path," and Crinklaw said the county is looking for a less-steep alternative.

"That will be the focus for the next year or so," he said.

There's also been discussion of creating a side trail so people can peer into the end of the old railroad tunnel, which is about a third of a mile long.

When the main trail is finished into Vernonia, endurance fanatics will be able to continue on the Banks-Vernonia Linear State Park, which by itself is 21 miles long. Because it's paved and well-marked, the Banks-Vernonia trail is an easier route than the Crown Zellerbach Trail.

Another good place for family bicycling is the eastern five and a half miles of the Willapa Hills Trail, starting in Chehalis.

But the CZ Trail's variety of scenery invites exploration, too, whether or not you're in your 80s.

A good description of the trail, mile by mile:

Geared toward hiking, with historical information and detailed maps.

A trail description that's a few years old, with photos and maps.

Record numbers of a once-waning population of sockeye salmon have been returning to the Northwest's Columbia Basin this summer, with thousands…

Decline in king salmon is rooted in the sea, Alaska state biologists say

ANCHORAGE, Alaska — Something in the ocean has been death to Alaska's king salmon.

Dave Warlick, 81, rides the trail about once a week.