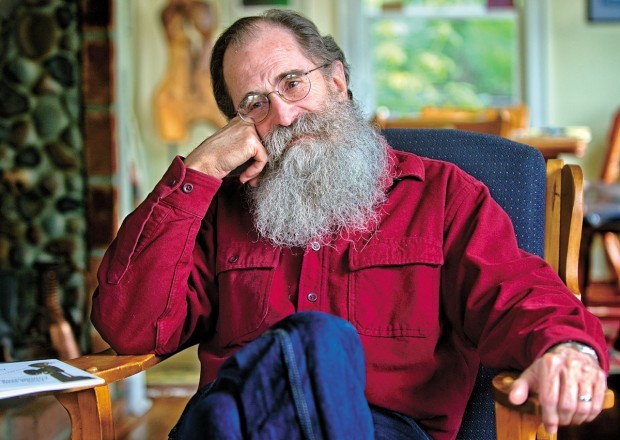 Retired Lower Columbia College professor Joseph Green will share excerpts from his new book Tuesday during the next Wordfest gathering at The Brits in Longview. Green, who taught poetry and creative writing for 25 years, has penned "The Thread Still Connecting Us," a chapbook of poems about his childhood. 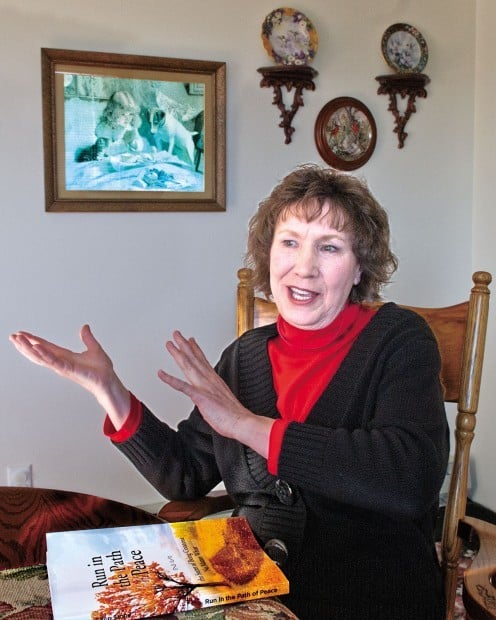 Retired Lower Columbia College professor Mary Stone will share excerpts from her new book Tuesday during the next Wordfest gathering at The Brits in Longview. Stone's "Run in the Path of Peace" is about her faith in God.

By Tom Paulu / The Daily News

Memories from Joseph Green's childhood are etched into his poetry. Some of his verses recall uncomfortable times from his boyhood. Other poems document wrenching scenes from a decade ago, when Green's father was failing in the hospital.

Stories of strained family connections form the fabric of Green's new collection of poetry, "The Thread Still Connecting Us."

It's the first chapbook of poems in more than a decade by Green, who taught poetry and creative writing for 25 years at Lower Columbia College before retiring in 2010.

In previous public readings, the Longview resident has chosen to share a poem called "Sweating Copper," which describes a young Green and his father crawling underneath their house to fix plumbing. One stanza reads,

Smell of gas and flux and solder vapor.

Can't you pay attention, maybe, just for once?"

Green follows that poem ith a recollection of how his father disdained his appearance. "In my early 20s, I had a very long beard and I rode a motorcycle," the poet said.

Charles Manson with that greasy hair

and that beard and that look in your eye ...

Green, 62, was born in Oklahoma and moved as a boy to Long Beach, Calif. His father, John H. Green, was a professor of theater arts.

"When I was growing up, there was a lot of tension there," Green said.

Later, father and son warmed to each other, and John Green spent his last 10 years here; his wife, Anna Gene, had died 13 years earlier.

"We got a lot closer," Green said. "I became more aware of why he was impatient with me when (he and his wife, Marquita) had kids."

Joseph Green wrote a poem about the challenges of dressing his father to take him to the emergency room. "It was about as simple as greasing up a snake and sliding it back into the dry skin it had split out of."

Then there's "Stoma," about attending to his father's ostomy pouch. The matter-of-fact treatment of the unpleasant task tells of a son'd devotion to an aging father.

Green wrote a poem called "Postcard from Salamanca," which he describes as an "almost documentary" account of his father's passing eight years ago. Green was in that Spanish city, taking a shower. "I had this overwhelming feeling he was in the hospital, in a coma," he said. "It felt as if he was saying, ‘It's OK, don't worry.' "

Then Green received an e-mail that his father had fallen and indeed was on life support at St. John. "I wrote back and said let him go," Green said. "I didn't want to prolong his suffering. It was a powerful thing to have happen. I walked around Salamanca for the next day and night as a sleepwalker.

"That's as concrete proof as I can find that speaks to the existence of a soul or spirit," Green said.

"I really feel lucky that we resolved a lot of these tensions before he died. A lot of people don't have that good fortune, and it's sad."

Green said he didn't set out to pen a collection of poems about his family dynamics. "I get the spark to write a poem and I write a poem," he said.

But the theme holds true throughout the 23 poems in "The Thread."

"Like most poets I know, I spend an obsessively long time working out the order of poems, and I almost think of the collection as one long poem, from beginning to end," he wrote in a description of his chapbook.

Green's love of literary expression doesn't stop with a finished poem. He and Marquita design and produce broadsides, elegant documents printed on heavy art stock with hand-set type. Green has a flatbed letterpress in his basement that he uses to print the limited-edition broadsides.

He's also part of a team working to preserve the craft of casting type at the C.C. Stern Foundry in Portland. "We call ourselves a working museum," he said. "We try to preserve the art and craft of working with type."

If Green had had the choice, "The Thread Still Connecting Us" would have been printed with old-fashioned pieces of lead, rather than a computer and digital printer as nearly all printing is done these days.

But there's an advantage of digital writing and printing when it comes to sales. "My last books went out of print very rapidly," he said. Now, his printer just runs off more copies when an order comes in through Amazon.

Faith shines through Stone's 'Run in the Path of Peace'

The sixth time someone broke into Bob and Mary Stone's house was the worst. "They spent two hours in my computer room," she said, dumping out drawers and going through financial records.

The thief made off with jewelry gifted to Mary Stone by relatives decades ago.

But by the time the burglar made off with them, Stone's philosophy on dealing with distress was well-focused. After years of prayer and Bible study, she has developed a deep calm.

"God, in His infinite wisdom, gently reminded me to thank Him for everything," Stone writes in her new book, "Run in the Path of Peace."

Stone's philosophy is based on one Bible verse: Ephesians 5:20. In the New International Version that Stone prefers, the verse reads:

"... always giving thanks to God the Father for everything, in the name of our Lord Jesus Christ."

According to "Run in the Path of Peace," even if a loved one dies, you're abused -- or someone keeps breaking into your home — you must still give thanks to God for all things.

After one of the burglaries, Stone writes, "God immediately pressed upon me to thank Him for our loss. I gritted my teeth and mouthed the words. Soon I was praying for the robbers' souls and for anyone who may end up buying the stolen items."

She grew up in Nebraska and was one of three graduating seniors in her tiny high school. Though she attended church as a child, her religious conversion didn't come until she was in her 30s.

When a boy she knew died in an accident, "It caused me to rethink life and death," she said, and she gave her life to Jesus.

"It was the first time I felt loved," she said.

"I used to be a very, very angry person," Stone said. She said it might surprise those who know her that she once had a foul mouth. "After I accepted the Lord I changed, just because I felt peace."

Stone was raised a Methodist and attended Faith Family Center in West Longview before moving to Longview First Baptist, because it's closer to home. She believes the Bible is literally true, but "We don't call ourselves Baptists," she said. She calls herself "a born-again person who really loves Jesus."

The inspiration for "Run in the Path of Peace" came in 1998, after a friend died at 39, leaving two children.

"I was so angry, angry, angry at God because I had prayed for complete health," Stone said in an interview at her home near Castle Rock. "I heard this voice that said, ‘Thank me for losing your friend.' It didn't make sense to me.

"As a counselor, that just flew in the face of everything I had a heart for," said Stone, who retired from a 30-year career counseling at Lower Columbia College last year.

When she heeded the voice and gave thanks, she writes, "God's presence surrounded me."

Though Stone said she had read the entire Bible three or four times, she started to view Ephesians 5:20 in a new light. "I had passed over that message many times."

She tested her new way of thinking at a Christian women's retreat. "The ladies at the center kept coming up to me and saying ‘I finally got free.' It doesn't make sense but it works."

Indeed, Stone is aiming her book at Christian women ages 20 to 50.

She insists that thanks can be given in any circumstance. "Yes, if you are the object of a terrorist attack, then God has a plan to bless you in this situation, to see His perspective on the whole thing," she writes.

Stone, who was already active in writers' groups, started working on her book five years ago. Its public debut is the Wordfest gathering on Tuesday.

She is quick to acknowledge that not everyone will agree with her book. "I don't expect people will get on board immediately," she said. "But people have said, ‘I'll try it.' "

She's used to having views that differ from those she deals with. Her religious views put her firmly in the minority at LCC, she said. "Academic freedom applies more to a lot of issues of the day. It doesn't support Christianity," she said. She said a fellow faculty member once complained to their dean that Stone was "nothing but a Bible thumper," she said.

"Just the fact that I love the Lord and I'm a happy person ... some people don't like that," Stone said.

"Run in the Path of Peace" costs $10 and is available over Amazon.com. The download e-book version costs $2.99, though it's free on the Kindle lending library.

Wordfest at The Brits

Joseph Green and Mary Stone will read from their new books at Tuesday's Wordfest gathering at The Brits, 1427 Commerce Ave. Both are retired Lower Columbia College instructors.

Watch Now: Beer bellies are a sign of poor health

Authors Mike Nettleton and Carolyn J. Rose will read from their newest works and be discussing the craft of writing murder mysteries during th…

Talking Dogs: Stay calm around dogs on the loose

Responsible dog owners know how important it is to obey ordinances by walking their dogs on a leash, as well as picking up after them.

Retired Lower Columbia College professor Joseph Green will share excerpts from his new book Tuesday during the next Wordfest gathering at The Brits in Longview. Green, who taught poetry and creative writing for 25 years, has penned "The Thread Still Connecting Us," a chapbook of poems about his childhood.

Retired Lower Columbia College professor Mary Stone will share excerpts from her new book Tuesday during the next Wordfest gathering at The Brits in Longview. Stone's "Run in the Path of Peace" is about her faith in God.